There was yet another candlelight vigil last night in America ... this time in Venice to show our solidarity with the shooting massacre victims in Orlando, Florida. This time it happened in a gay nightclub, but it doesn't matter who it happened to, because it happened to all of us. Again. 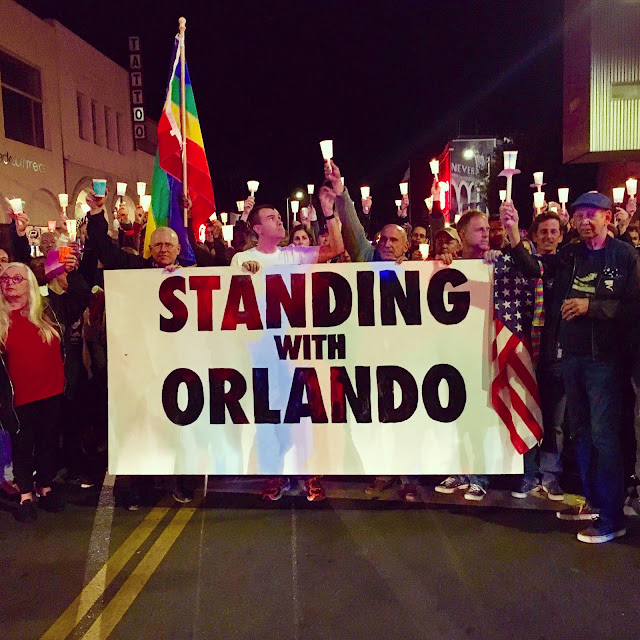 It doesn't matter either what you think about guns ... no person in their sane mind - whatever their position is on arms (and I think they're only for pussies that can't use their words, but that's just me) - can make an argument for everyday people having access to assault weapons. NO ONE needs one of them. The NRA is a travesty, and any organization that has the President Of The United States saying that he's not "allowed" to even do a STUDY on gun violence, clearly has too much power and must be dismantled. Relax - that is not the same thing as saying take away all guns - though I'd be totally fine with that too.

So, once again, concerned and upset citizens gathered together to make ourselves feel better being together with like-minded friends and neighbors, and also to make our voices heard. Last night was for pain and comforting ... today is for action.

Venice met up at the Windward Circle, where a rainbow flag and flowers had been placed on the Robert Graham statue (that I call the Black Dahlia) that filled in as a memorial site. Candles and flowers were placed at its base, along with a big sign reading, "STANDING WITH ORLANDO". 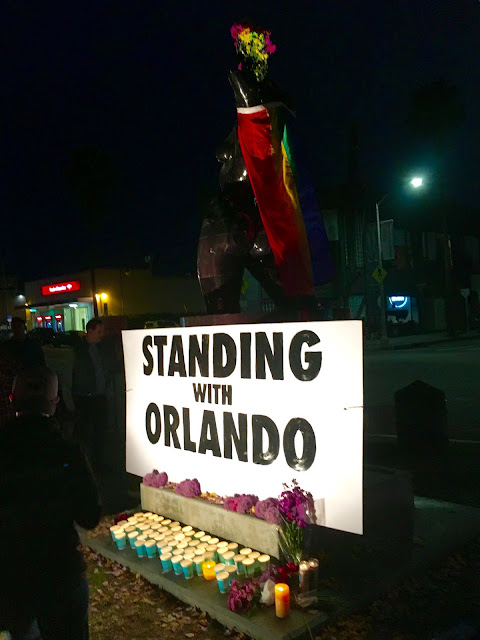 Those in attendance (and I'm actually surprised the entire town wasn't there - apathy in this country is one of the biggest problems we have - PARTICIPATE!) were hugging and crying, filled with both sadness and righteous, justified anger. People took turns speaking and getting things off their chests and minds, and I think Daniel Samakow said it best when he said that one of the happiest days of his life was 11 days earlier when the Venice sign had been lit in rainbow colors and the streets filled with a dance party for Venice Pride, and now here we were overwhelmed with sadness, with many of the same people in attendance. "The beauty that comes out of this pain is this. Our community coming together to show that we stand for diversity." He was right. It was beautiful as we all stood together, holding candles aloft in solidarity, not just with the Orlando victims, but for better laws and gun control. There HAS to be. Samakow added that we were standing together at the Graham statue, because he had said that the statue was meant to symbolize "Strength, courage, and sexual freedom". And together we ARE strong.

Grant Turck read of the names of all of the people murdered in Orlando, and it was terribly sad to listen to them all and know that they were just people out together for a good time, fully innocent in this nightmare. Again. Someone said that their friend had been scared to come out to the vigil, that someone might target this group of mourners. If something happened to me while I was out showing my support and love for my fellow citizens, I guess I'd be ok with that. WE have to keep living, and speaking out, for the people that no longer can. It's our DUTY. 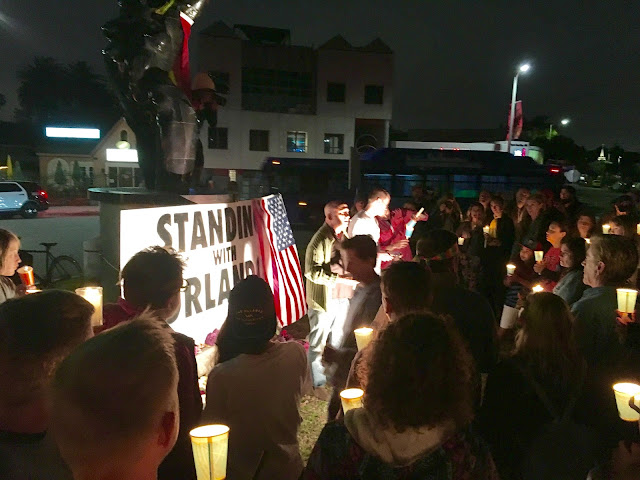 Another speaker was a transgender girl, who also said she almost didn't come to the vigil either, but was so glad that she did, because seeing that people really care helps to make you feel better about it all. She said that she would now be even more out and vocal, because the people that died in that club just trying to be who they were, no longer can. One man got up and told a tearful story about gays being persecuted in the past, and just when you think you've made all this progress, something like this happens. But I don't see it as a gay issue at all. Many in the crowd were gay, but just as many were not. It was all just concerned and activism-minded members of humanity, wanting things to be better for everyone. No one should have to die - or even lose friends - over lifestyle or political choices. You don't have to agree with each other on anything other than the fact that all humans matter. Pretty basic stuff. Golden rule.

As tears fell hearing the seemingly endless list of names, the sadness turned to anger and action. The next speaker, Michael, urged everyone to yes, feel sad, but to DO SOMETHING. "200 people here now is 200 actions tomorrow!" From calling your local representatives and congress and letting them know they will lose their jobs if they don't do something to signing petitions to ban assault weapons to simply being there for your community - something must be done. He got a laugh when he said, "Gay people are not going to be quiet!" - and I hope he's right. Another young man got up and thanked everyone there for making it real for him. Seeing all this news on your phone or t.v. is one thing, but being there together with people in real pain and concern is something else. "Thank you for letting me feel it." Because we all definitely felt it, the pain and the hope - that together we can make some kind of a difference in all of this madness. 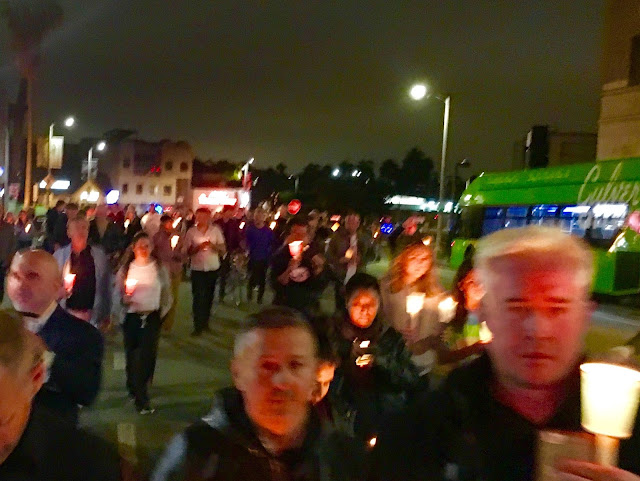 Local Councilman, Mike Bonin, got up and said, "Things are fucked up in this country. I don't think it's the most respectful thing to have moments of silence, I think we need to be loud and pissed off !" And he's right. Silence will do nothing. "Our capacity for love is our strength." Also true, and also very much felt there in the Circle together ... gay, straight, young, old, all races, all religions, all political leanings ... our love makes us strong. But bullets don't care. Something must be done.

My friend, Beth Greenwald, got up and said that she's kept waiting for another Gandhi, or another MLK, Jr., or SOMEONE to come along and lead in all this social injustice and mayhem we've been dealing with as a country, until she realized that it's US. The People have always had the power. I think we just forget it sometimes when things feel so awfully messed up. That we CAN change it. We HAVE to.

The entire group then walked up Windward Avenue to the rainbow-lit Venice sign, where we all raised our candles and were NOT silent. We yelled and cheered for change, and for love, and on this night, for Orlando. Photos were taken to be sent out into the world to show that we indeed stand together, and stand STRONG for change. There were hugs and more tears, and then people needed a drink. And to mourn. And to strategize. Because today is that day of action. Our country has become a violent joke to the rest of the world, and I'm not ok with that. We all know we can do better ... and we all know that we MUST do better. 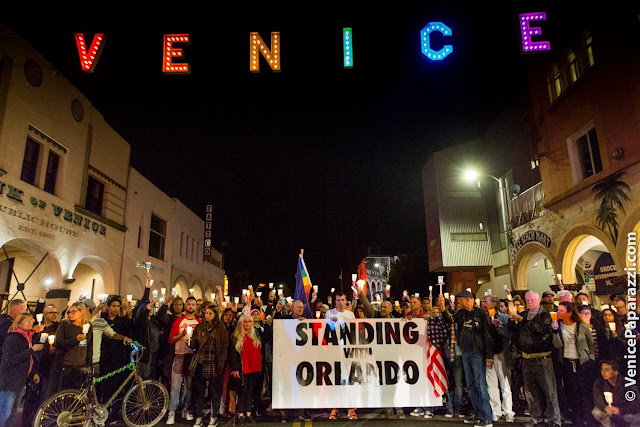 PLEASE stand up and make your own voice heard, in whatever way you can. And please never forget that we're all in this together. And please, PLEASE just love each other. It's really not that hard.