Today is Go Skateboarding Day, and where better to celebrate that than where it all started, right here in Southern California. Of course, skateboarding is now much more than the sport, it's an entire aesthetic, from clothing styles to fine art, and created an image coveted throughout the world. The artistic sensibilities of it can almost be personified within one group of artists - The California Locos.

The Cali Locos art collective is comprised of five world class artists: Chaz Bojórquez, Dave Tourjé, John Van Hamersveld, Norton Wisdom, and Gary Wong, each of whom have made their mark in skate and popular culture for the last 50 years. These are museum level artists, bridging the gap between the fine and street art that has defined Southern California's vibe ever since the dawn of skating and surfing.  Each of these legendary artists will be honored this Saturday, June 25th with an epic shindig hosted by Terri Craft and Dan Levy of Juice Magazine at The Rose Room and at Juice Headquarters on Ocean Front Walk. This is a Venice party that will be talked about for a long time to come, and you do not want to miss this historic jamboree. 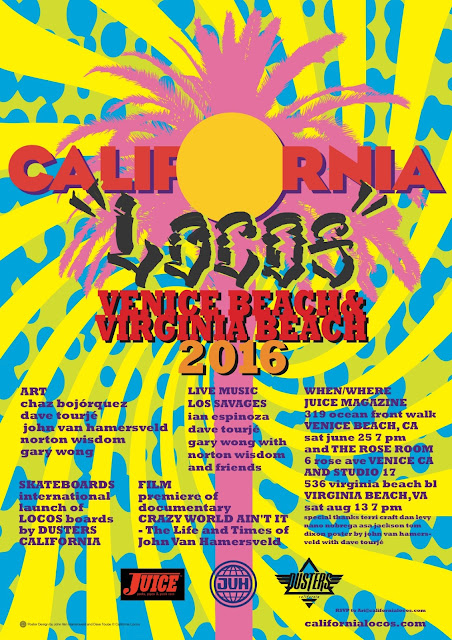 These are some of the most profound artists in California history ... their authenticity cannot be questioned. The Cali Locos have all been friends for decades, and are a wonderful mix of international influences. All say that they inspire each other in different ways, and push one another to keep creating. "It's kind of like skating a pool," says founding member Tourjé. "You gotta bring your A game, and we all push each other to go higher." They all have a Chouinard Art Institute (later Cal Arts) connection, and all have been working artists since those days.

Tourjé bought and restored the old Chouinard house in Pasadena in 1998, and in 1999 formed The Chouinard Foundation to bring art programming into cities and schools. Learning more about other local groundbreaking artists caused Tourjé to get hyped about a collective of like-minded artists also influenced by the colorful and intense environments of urban Los Angeles. Tourjé has also made documentaries about both Chouinard and the Cali Locos, important historical works both.
Like the rest of the Cali Locos, Tourjé's art is always informed by the surf, skate, and punk scenes founded here. "This is happening all over the world, but L.A. is the epicenter of it all. The Cali Locos are a reflection of that, and that's why people enjoy it," Tourjé told me absolutely correctly. We love it. 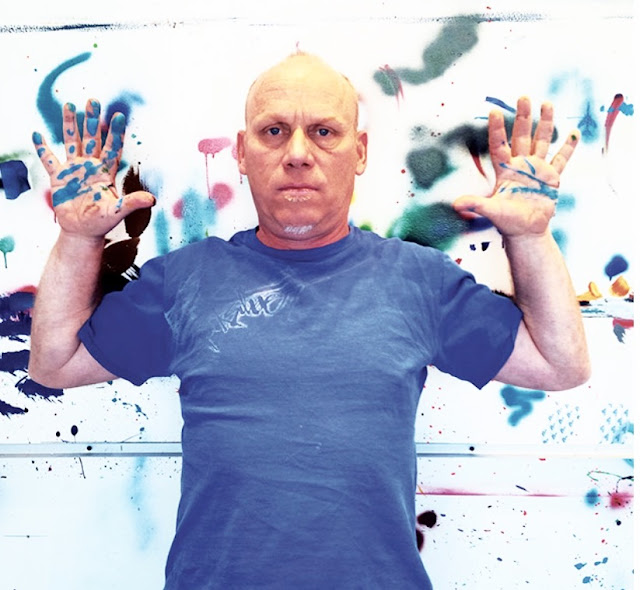 Chaz Bojórquez is known as the Godfather of L.A. graffiti. From the streets of East L.A. to being in the collections of several fine art museums, Bojórquez has spent the last decades studying and mastering the art of lettering. He traveled the world to learn other styles (like Chinese calligraphy) different from the Cholo work being done locally, creating something entirely his own. He is known for his iconic stylized skull, "Señor Suerte" (Mr. Luck), and really started the stencil tag, later popularized by Banksy and Shepard Fairey. Today Bójorquez is collected all over the world, in museums from LACMA to The Smithsonian. 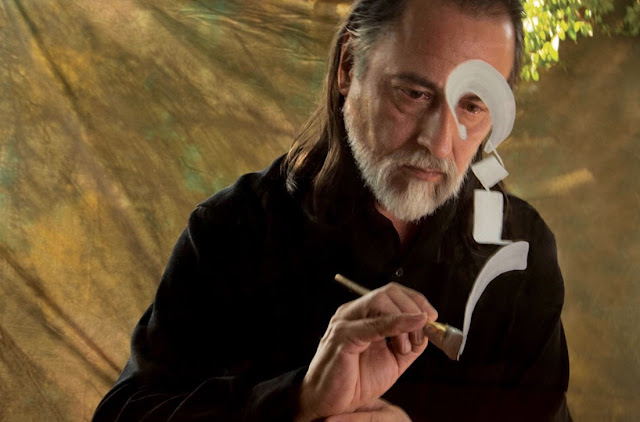 Norton Wisdom started out as a Topanga beach lifeguard, and has become one of the most recognizable performance painters working today. After painting a big section of the Berlin Wall, Wisdom realized he couldn't be contained inside of a studio, and began collaborating with bands on art pieces that exist only during the duration that the music is played. Cool. Wisdom often tours with punk and blues bands, live painting while they play (as he'll be doing this Saturday at the party as Tourjé's band, Los Savages, jams for the revelers), which he was doing when Tourjé saw him and asked him to be a part of Cali Locos. "Punk rock changed the whole course of the rest of the world's value system for a world aesthetic, and Cali Locos is an important example of that," says Wisdom of his group of friends. Wisdom has shown his art all over the globe, and has also collaborated with the best of the music world. In addition to this Saturday's performance, he'll also be painting with The Black Poets on August 5th at the John Anson Ford Amphitheater. 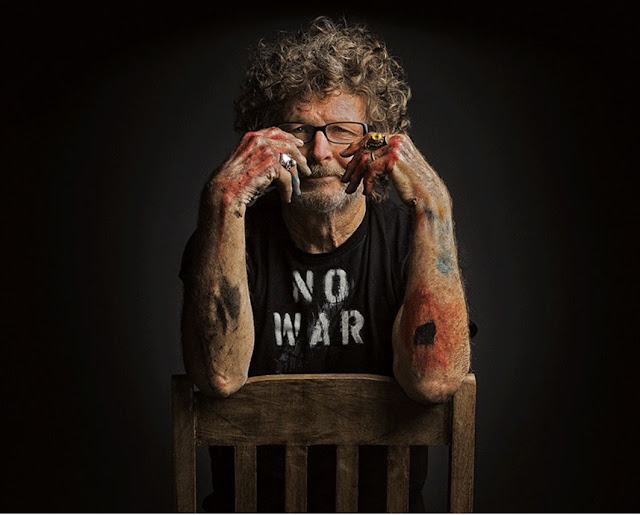 Most people know John Van Hamersveld from his iconic poster for the film The Endless Summer. That famous poster seen in dorm rooms world wide since the 1960's is only one aspect of the long and illustrious career of this self-described "Palos Verdes white boy". Van Hamersveld was the art director for Surfer Magazine, and has always been steeped in that culture. "As the elder statesmen now, we're showing off how the culture became what it is today," Van Hamersveld explained to me. "We've watched it get sophisticated and really be referential for all skate/surf/snowboarding culture today. After a busy period of art directing and art that served a client (like doing the album cover for The Rolling Stones' Exile On Main Street!), Van Hamersveld says his whole career has taken a turn toward public art. "I've built a new vernacular through murals," he told me. He did a lobby mural for a tech company in San Pedro, the press saw it, and a whole new career was invented for Van Hamersveld. Included in his work being shown this Saturday will be a piece called Thundercloud, based on a found photograph of a Native American from the Blackfoot Tribe, as he has never lost the part of him that insists that "the hippie world was my venue." No wonder I dig his stuff! There will also be a detail piece from a mural Van Hamersveld did called The Great Wave. Seriously, I cannot wait to see all of this incredible work in one place! There will also be a premiere that night of the new documentary Crazy World Ain't It - The Life And Times Of John Van Hamersveld. 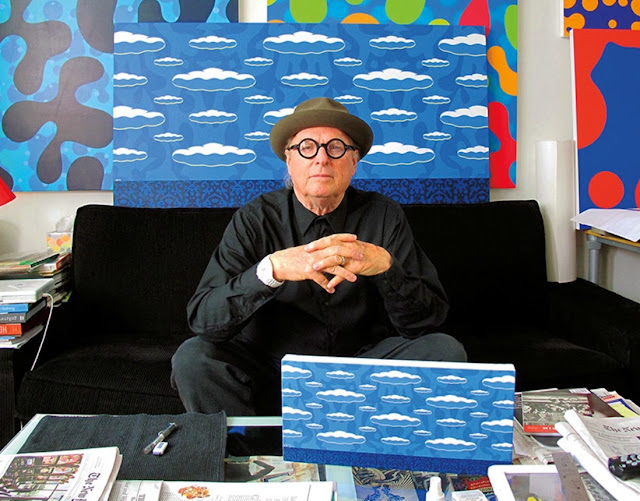 Gary Wong is another product of Chouinard, where he became friends with Ivan Hosoi, and is the Godfather to skating legend, Christian Hosoi. A blues performer in addition to being a fine artist, Wong is known in those circles as "Mr. Charlie Chan"(and will also be performing on Saturday with Los Savages). Wong's artistic process includes collage, painting. and drawing, often coupled with his photography. His work reflects his music, and tends to have socio-political leanings, as all the best art will do. I've never seen his work in person, visual art or musical, so this is another exciting element of the opening for sure. 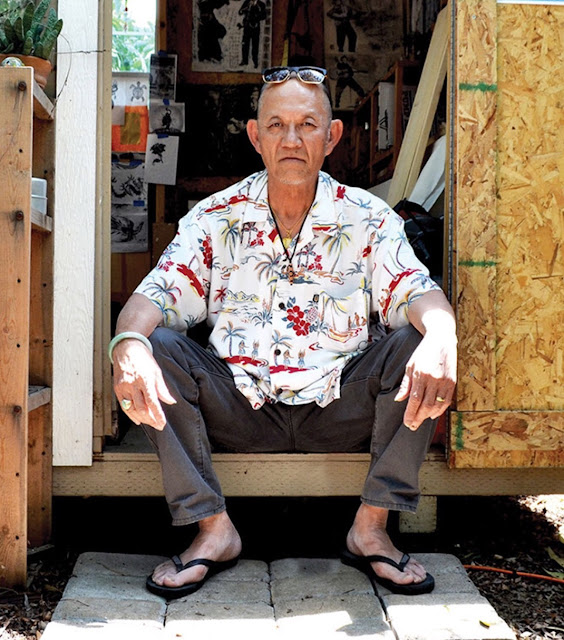 As if all of this wasn't enough for one party (and it is, by far!), there will also be a new collaboration of skateboards released, designed for each Cali Locos artist by Nano Nobrega of Dusters California. Nobrega designed a graphic based on work by each artist, and complimented each complete board with custom designed wheels, brands, colors, and even built-in bottle openers. It all started with an Endless Summer graphic board that Duster did. Van Hamersveld knew Bójorquez, who was next on Nobrega's wish list of graphics to work with, and it all just organically came together. Nobrega told me, "These boards all relate to each other, and bring the vibes of just having fun with skating." The Cali Locos all just saw their signature decks for the first time at a video shoot last week, and Nobrega told me that they were all "smiling like little kids." I bet. "I'm so honored and excited to be a part of this culture," says the Brazilian-born Nobrega, with obvious sincerity that is echoed by absolutely everyone involved in this history in the making. Truly. As my friend and art critic, Shana Nys Dambrot, has written, "What they did (the Cali Locos) changed everything - but what they are doing now is the best work of their lives." Meaning, you'll want to be there and see it all on Saturday. 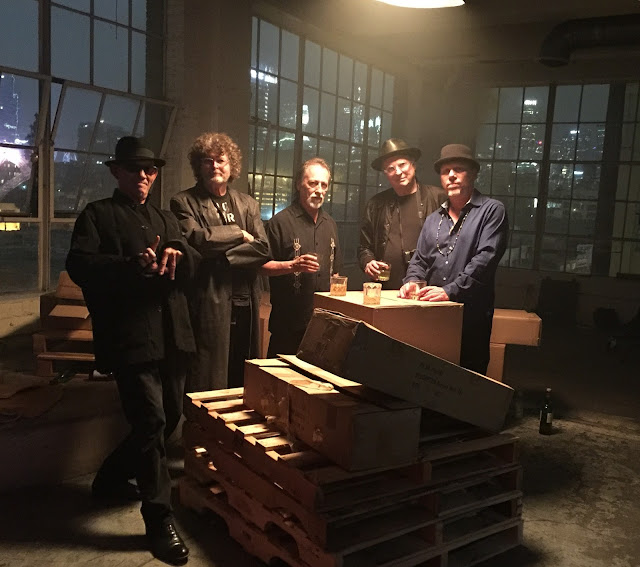 The opening party on Saturday is going to be insane (Steve Alba's Salba & His Heavy Friends will also be playing!), and I'm told the people watching alone will be nothing short of epic. Come prepared to have your mind blown and the best time ever, as Venice celebrates the art, music, and skating culture that we all love.

*The show will be up until July 1st in the Rose Room, and then the entire show will move to Virginia Beach to give the East Coast a chance to see it.

**There will also be speaking panels during the week that the show is up, featuring Christian and Ivan Hosoi and Larry and Oliver Bell in a Fathers/Sons panel, and another one the next day with Jeff Ho and Jim Ganzer, both moderated by Shana Nys Dambrot. These will be held June 28 and June 29 in The Rose Room, from 7-9 pm.