Nature Makes Us All Kin

I know I'm not alone when I look around and think the entire world is going insane. Times are crazy, and volatile, and scary, and ... does any of it really matter if we don't have a livable Earth? In yesterday's political hubbub, I didn't realize until the evening that it was World Oceans Day. I LOVE the Ocean. It really is the only thing sometimes that keeps me sane. Indeed, yesterday I had to shout out to the Pacific Ocean and Radiohead's A Moon Shaped Pool for keeping me from either self-destructing or getting into an actual fist fight with all of the mainstream media. Instead, I breathed in deeply and thanked my lucky stars that I had all of this beautiful water to calm me down and appreciate all of the beauty in the world.

And then I saw the dead bird. Just about every morning I see something dead as I walk along the shore, from bees and butterflies to a big, fat seal bloating in the sun. It's awful, and I don't know why it's happening, but it is. I pay close attention to the Heal The Bay water scorecards, and though it might say "A" for our water, they can't test the whole ocean, and something is killing things on a regular basis. The Oceans sustain most of the planet for food. It's all connected, and if human life becomes impossible on Earth, it really won't matter at all what political party you're a member of or what candidate you support (it doesn't feel like it matters anyway, with all of the corporate calculation going on, but that's another story for another non-World Oceans Day). 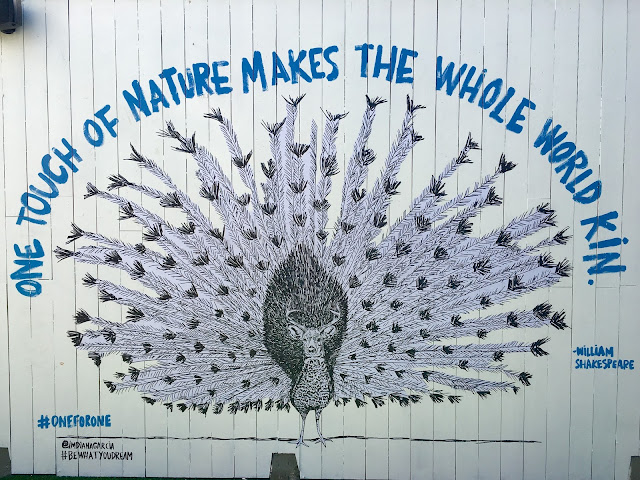 As I was thinking about all of this, I walked over to check out the brand new mural by my lovely friend, Diana Garcia, in the back patio of the Tom's Shoes store on Abbot Kinney Boulevard. The gorgeous deer/peacock spreads its tail and reminds us that "One touch of nature makes the whole world  kin" - from Shakespeare's Ulysses. In that moment as I read those words, I felt that profound truth, and decided it far better to focus on what we can do TOGETHER to help the world, not fight it. To lift each other up, and hold ourselves to better standards of respect for our Earth and all its Peoples.

Truly, none of the rest of it matters if we don't have that.

Thank you, Diana! #Bewhatyoudream
Posted by CJ Gronner at 4:11 PM