The Neptune Festival Declares It Officially Summer 2016 In Venice!

June Gloom split right on time and Sunday was hot and sunny for the annual Neptune Festival held in Venice each year to officially proclaim it to be SUMMER! 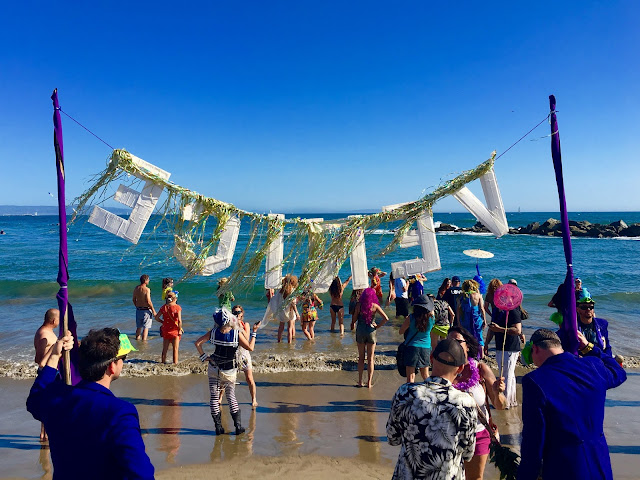 The party started at The Sidewalk Cafe, where sea-themed revelers caroused and prepared to parade together to the Ocean. 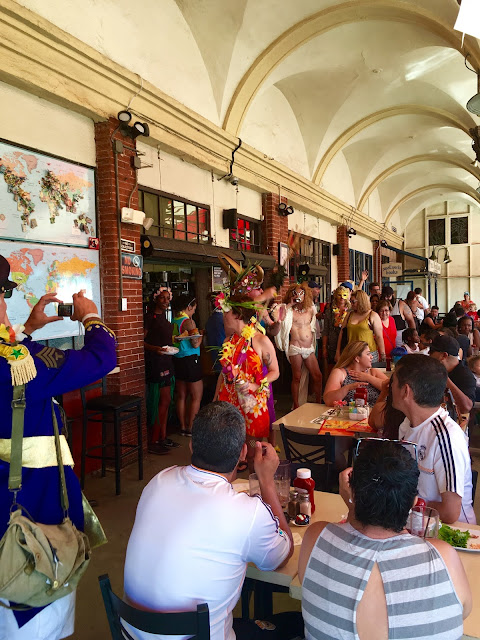 This year's King Neptune was Jeremy Parker and his Queen was Kaycee Smith, both all done up in vintage Hawai'ian threads, leis, and elaborate headdresses. Their royal court were all in similar attire, and everybody was ready to make a big scene in the name of Summer fun. 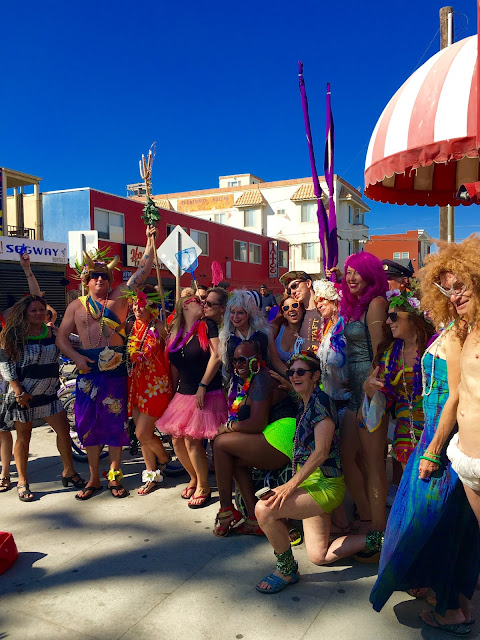 The group was called to order outside of The Sidewalk Cafe with a blast from the royal conch shell, and we all lined up behind the sparkling Venice sign to process down the Boardwalk, across the sand, and down to the water. 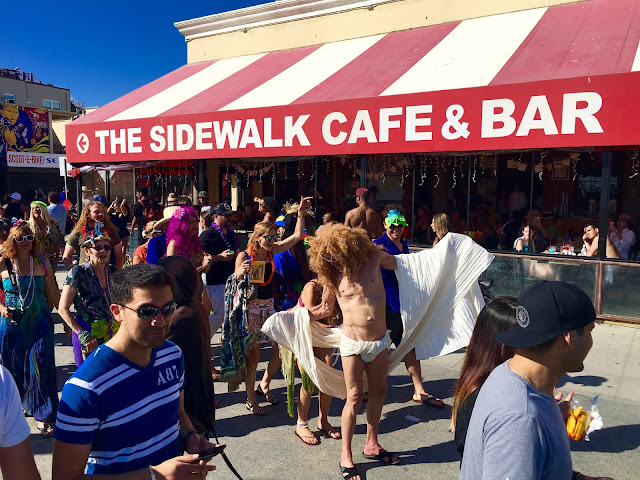 My favorite part of the Neptune Festival is seeing all the unassuming tourists and beach goers who have no idea what's coming or happening. The chants of "Hail The King! Hail The Queen Hail Summer! Hail Venice! Hail Yeah!" were repeated all along the way, and the parade grew in size as pleasantly surprised fellow lovers of Summer joined the gang. 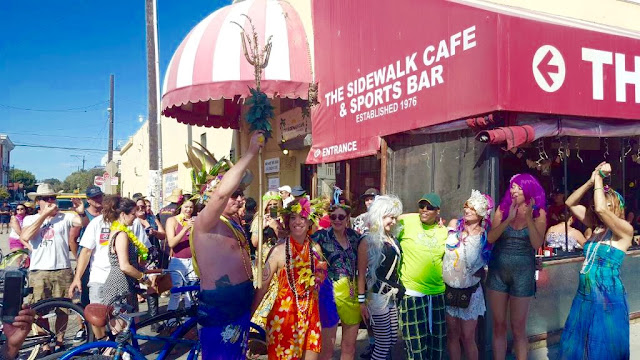 Mermaid Queen Smith read her official statement, stressing the importance of our Venice traditions, especially in light of all the change going on around town. She encouraged us to live by example, "To skate more, and to love more!" Hear, hear!!! 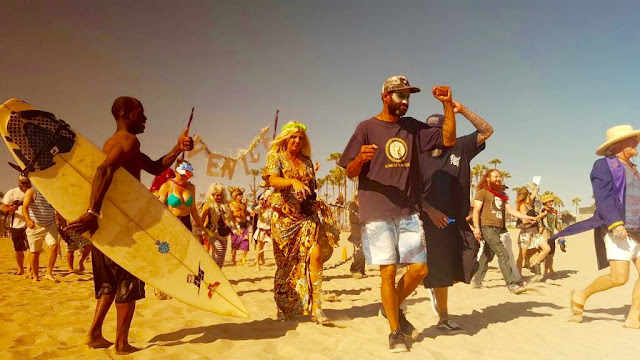 With another blaring blow to the conch shell, King Neptune Parker read his royal decree next, urging that there be music and feasts, and "Fine wine, women and friends!" "We are all humans! We are an example of love and unity for the world! I declare that SUMMER IS HERE!!! To the Water!!" With that proclamation, we could now declare it to officially be Summer in Venice! It was awesome. 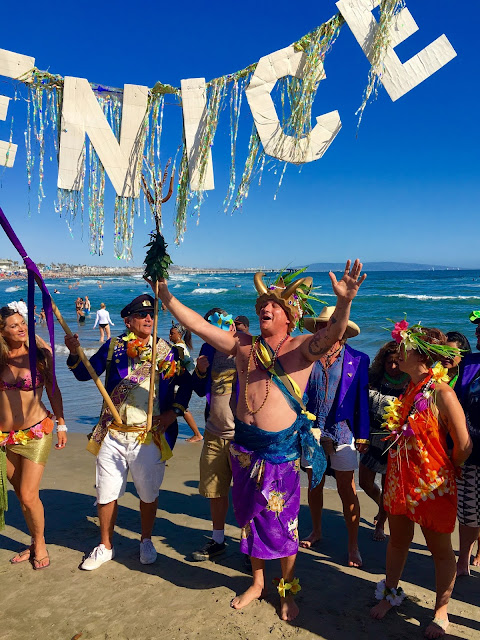 The King and Queen went into the water for the ceremonial dunking that the Neptunes must do to make it all legit. They were joined by several members of the royal court and a whole bunch of folks that just wanted in on the fun. Last year's Queen "The Visqueen" Dakota Rayfield had my favorite quote of the day when she looked out at all the summery chaos and said,  "Look, we're just reigning beautiful mischief all over the place!" 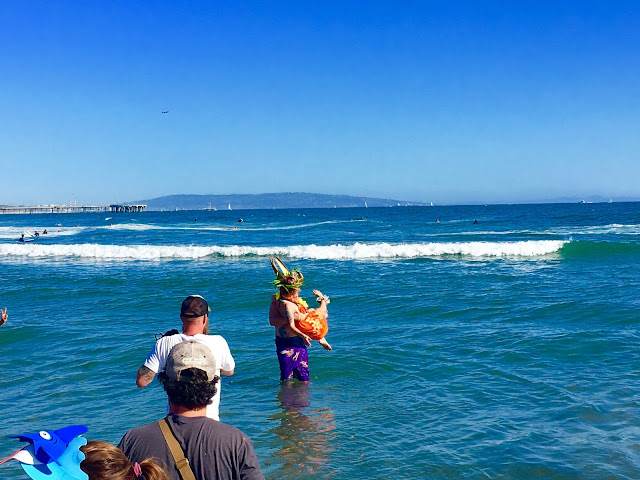 The entire group posed for photos together, then traipsed back across the sand to carry on the party at The Sidewalk Cafe with live bands and royal revelry all the rest of the day, until a golden sunset put the perfect exclamation point on the wonderful day. 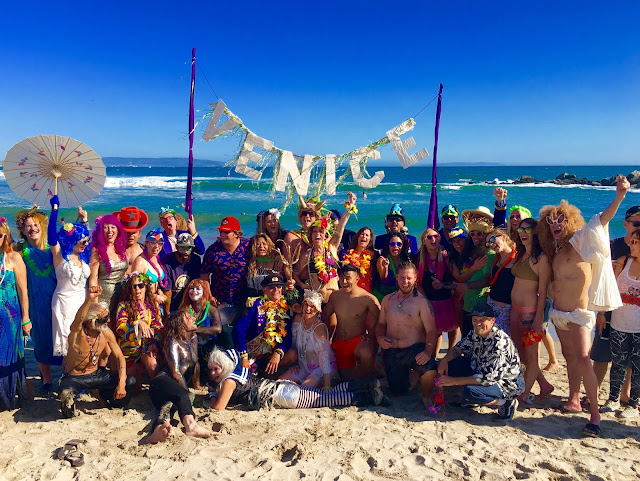 May we all have a Summer absolutely FULL of beautiful mischief! Hail Yeah!!!