Jane's Addiction just made their iconic song "3 Days" a reality, as they played their entire Nothing Shocking album+ three nights in a row at the Brooklyn Bowl in Las Vegas. The band was there to celebrate that all-time classic record's 25th Anniversary (time fllllllies!), and the fans were out-of-their-minds about it before a note was even played.
I headed out to the desert for the final Saturday night show, and after hearing all the superlatives about the previous two shows, I know it was going to be ON. A whole crew made the trip out from Venice, so there was a bit of a hometown show feel to it, even in the middle of Sin City. The Brooklyn Bowl is massive, and it was jam packed to sold-out capacity, with the die-hard fans squeezed up against the stage ten deep a couple hours before they started. Then 20 deep, then 50 deep ... then so deep I thanked my lucky stars that I had my spot in the balcony to not move from until the last bow. As tribal sounding music amped up the room leading up to Jane's taking the stage, the atmosphere and anticipation was sheer electric. (Neon, to be precise. This was Vegas.) 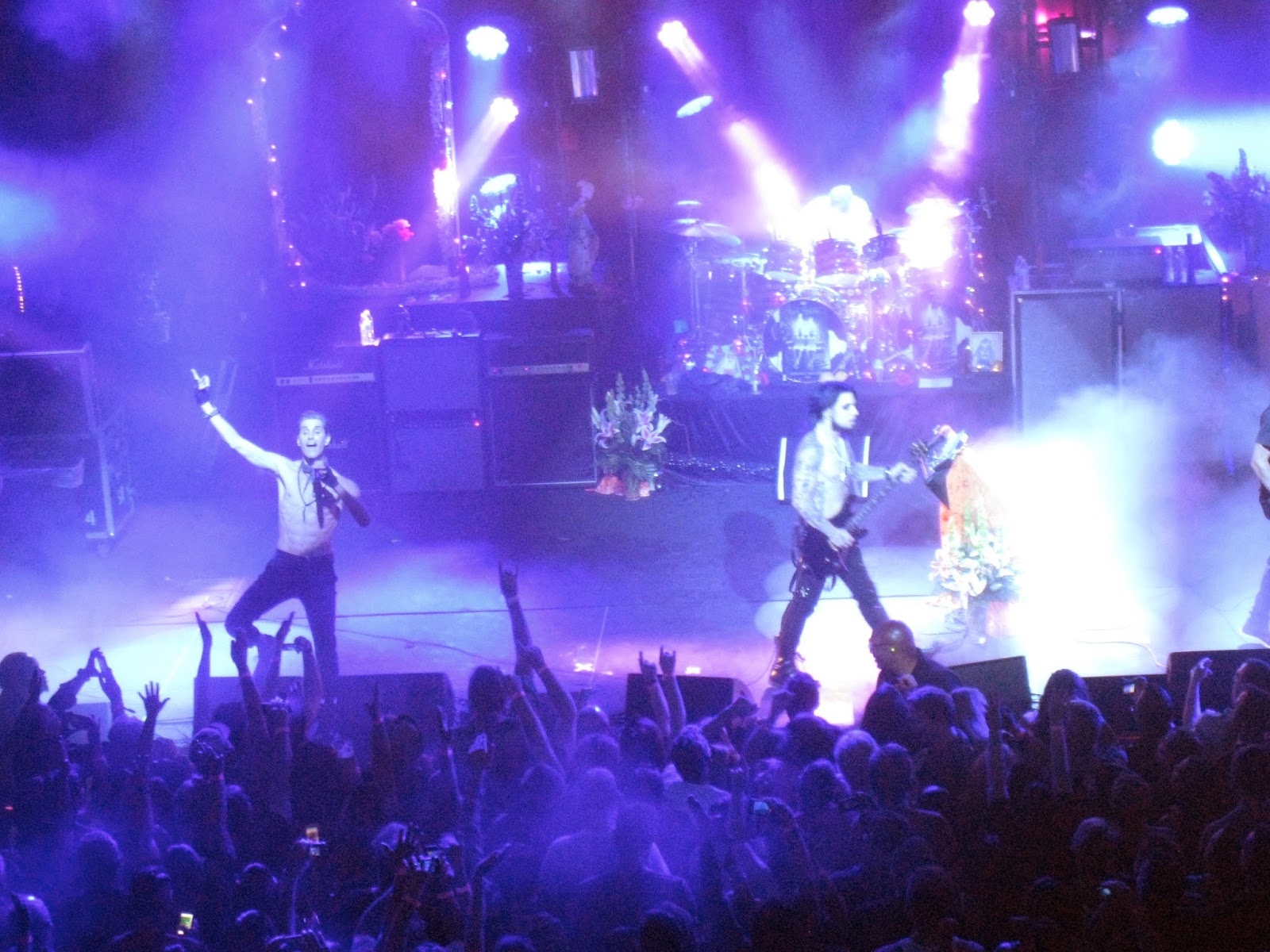 The stage resembled a Day of the Dead altar, with Christmas lights hanging and flowers in vases all around. When the lights went dark and Stephen Perkins came out and sat at his drum kit, the crowd went crazy. When the opening chords to "Up The Beach" rang out ... well, I completely have chills right now writing about it. It was nuclear powerful in there. Dave Navarro came out and began that familiar opening number with his signature cool prowess, Chris Chaney ruled that bass line, and Perry Farrell sauntered out wailing those haunting vocal notes that set Nothing Shocking apart from anything else out there back in the day, without barely an intelligible word sung. He held a bottle up upon entering, high-fiving everyone down front, signifying that the party would now begin, and we were invited to join in the fun. 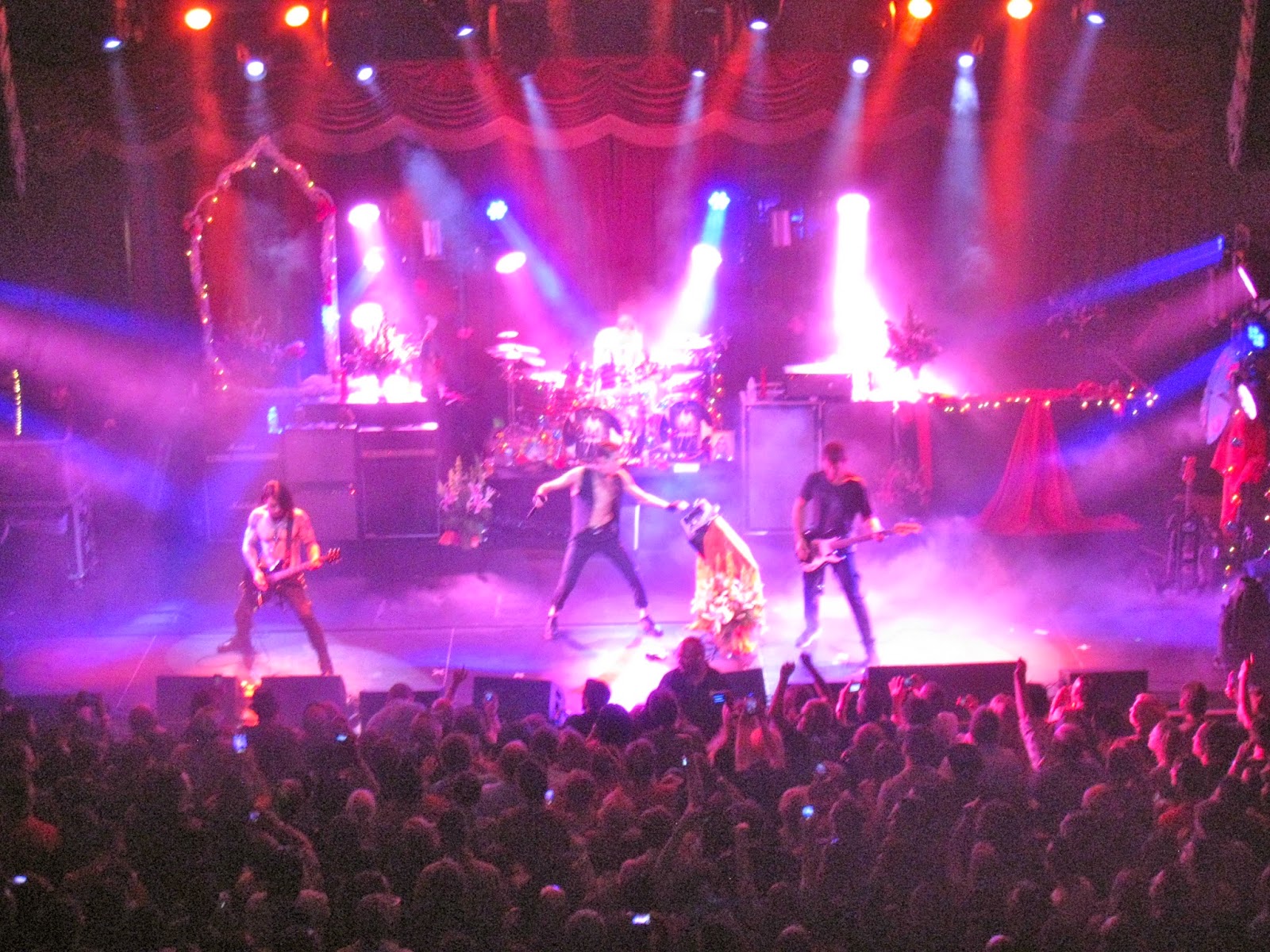 FUN! Like blasting out "Ocean Size" and "Had A Dad" back to back, the whole band going as OFF as the fans were. I could tell Perry was in rare form, feeling it back from the fans that love him (and knew every word), and returning it ten-fold. The dancing never let up, the voice and the music were as rad as the day we first heard them (maybe even better, as they've now played the tunes so many times, and they don't live as rough as they did back then, so ... YESSSS!).
"My beautiful friends! I'm so happy to see you again, because you never know when it's time to go ... but now ain't the time!" A fan gave Perry a hat and a joint, and Perry responded with the first of a bunch of awesome and hilarious stage banters about generous people being better than fucked up assholes ... "I want to be friends with generous people ... sometimes you gotta slow down and take a look around ... The cool thing about marijuana is it's communal, everybody shares ... No one wants to share their junkie spoon ... Marijuana is beautiful incense ... !" With that (plus a puff) from Perry, the band tore into "Ted, Just Admit It" like maybe never before. "SEX IS VIOLENCE!!!" It was boiling, incendiary hot. Perkins was going off, a total machine. Navarro's solos are intoxicating, and Chaney almost makes you forget he didn't write those Avery bass lines, and he's made them his own. Perry is ... well, Perry. One of rock's greatest ever front men. Period. No, the WORLD'S great front men, not just in rock, in humanity. A seriously cool cat, and a great friend. 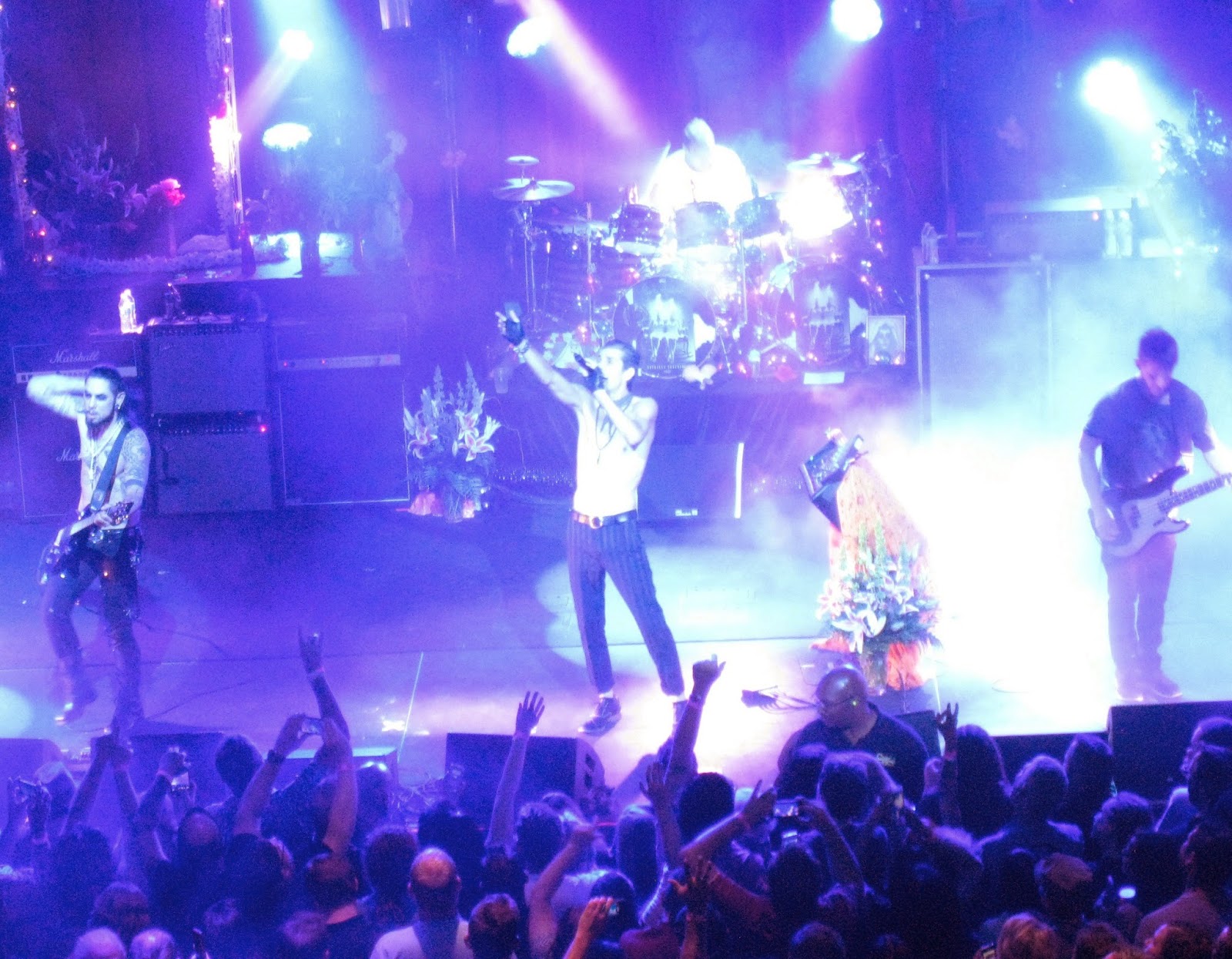 Well, after that one that gave the record its name, everyone was all riled up, perhaps Perry most of all. "I can't wait to fuck again, I'm raring to go!" All bets - and shirts - were off by now, and it was a complete rock frenzy. We all needed a cold shower about then, but "Standing In The Shower, Thinking" would suffice. More than suffice. Rule.
A wind had blown in right before the show, nearly blowing us all over on our way to the venue. Flights were cancelled by 70 mph winds, which brought back some friends who had tried to leave, but instead got another show. Perry had a discussion with this crazy wind, who told him "If you rock my ass out, I'm gonna give you Summertime." So Jane's gave US "Summertime Rolls". This is a top candidate for my favorite song of all time, so I was thrilled to again see it being played (as it rarely is) live. I wasn't remotely alone, as the entire place sang along word for word, and it was clear that this is one of those classic songs that really MEAN something to people. It hearkens you back to the greatness of when and where you were hearing it for the first time. So special, so beloved ...

Equally loved and massively ROCKED was "Mountain Song". This is Jane's at their absolute best. My notes simply said, "Going OFF!" It was monstrous. I'm sure you can imagine. Voices were lost during this one, I actually heard a friend speak before and after, and this was where it went. Well worth it, he'd agree.

Fishbone was also in the house for these shows, and Angelo Moore came out to jam horns for Jane's on "Idiots Rule" ("That should be America's theme song" - Stephanie Hobgood). Jane's and Fishbone go way back, as Moore put it, "We're like Ebony and Ivory, Punk Rock stylie!" They, indeed and agreed, have gotten better with age, no question. 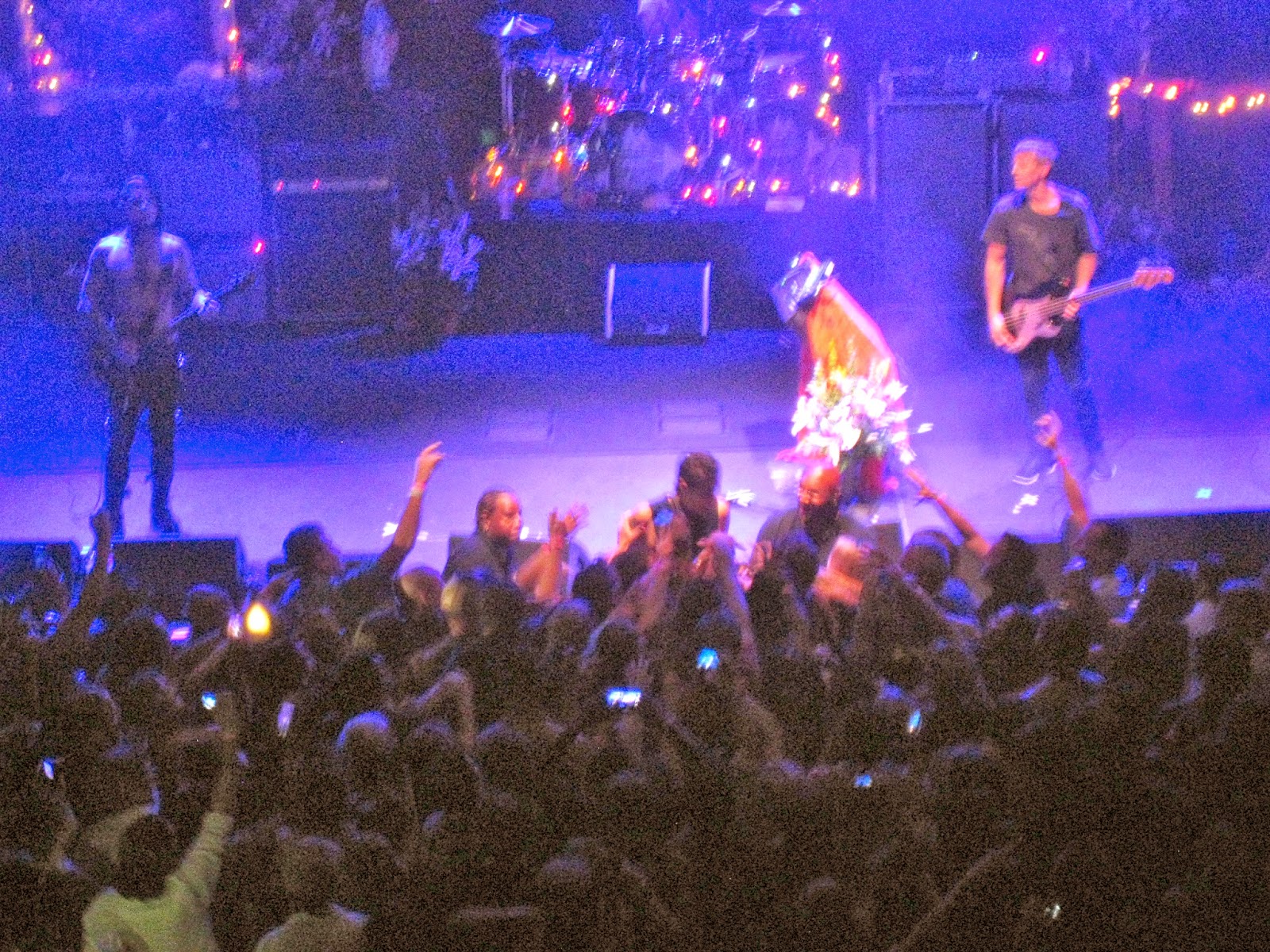 Perry talked about our generation, changing things for the better, things like making history voting in Obama ... to which a guy next to me said, "Ooh, there's a lot of Republicans here in Nevada" ... to which I said and meant, "Who cares?" No matter what, as Perry said, "We're all here together, having a good time!" ... and that's the point of it all. Music bringing people together to rock out, have fun, and UNITE. If people are moved by and love the same music, they have something common inside that can bridge gaps, show that you share something good, and go forward from there. We're all in it together, and not just at amazing shows, in life. So have a good time together. Not so hard after all, is it?

As they played through the album chronologically, you realized just how much EVERY track on Nothing Shocking is not just good, but GREAT. And holds up to be way better than most anything just coming out now, for real. No matter how many times you've heard "Jane Says", it's always awesome. This night's playing might have been the MOST awesome, with the steel drum version killing us of course, but also that we knew it was its 25th birthday ... so we sang along, in lieu of the Birthday Song. "She takes a swing, but SHE CAN'T HIT!" ... was the loudest I've ever heard it sung by a crowd. Again, a truly beloved tune for so, so many. 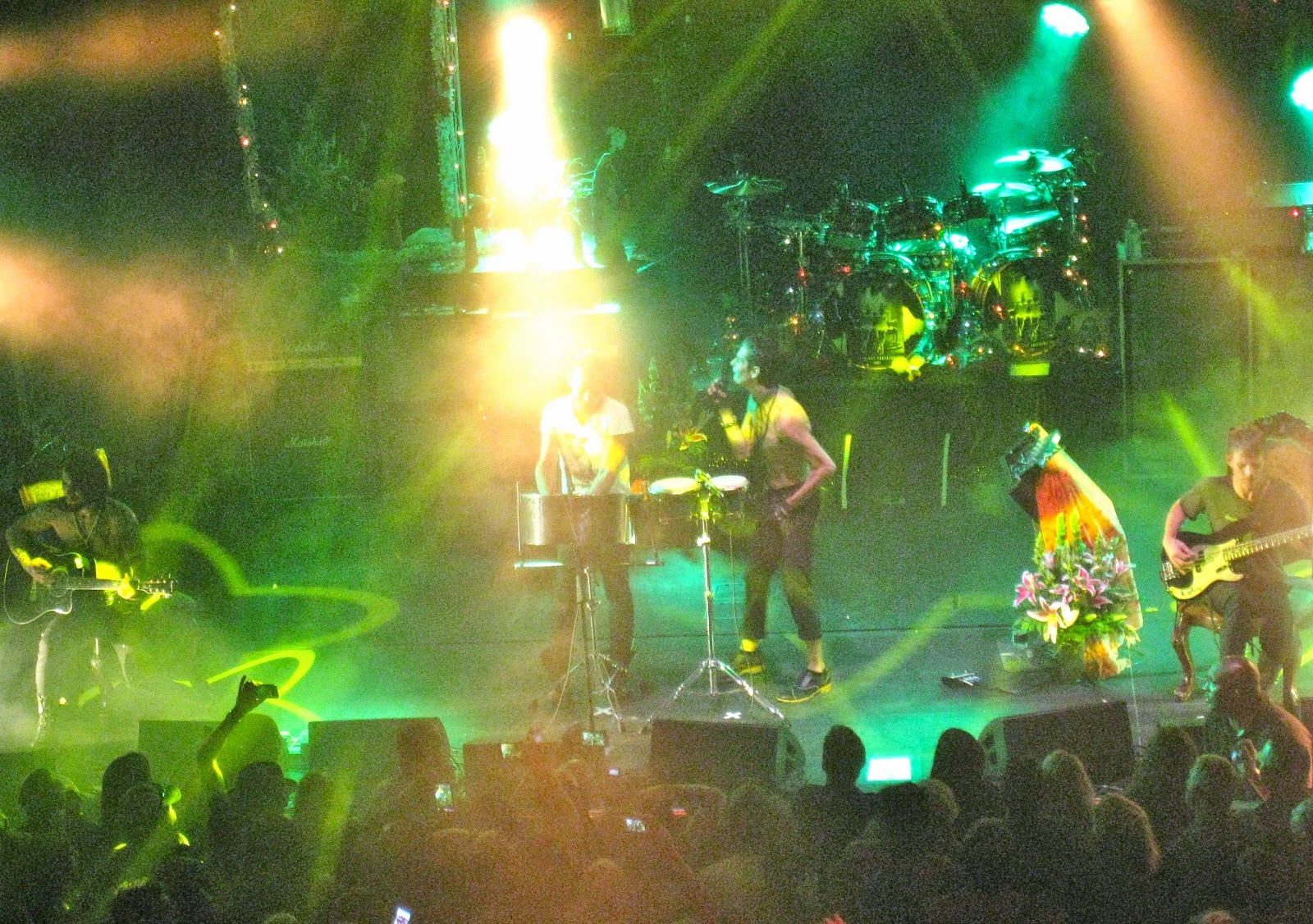 Reflecting on the years that have passed, Perry said, "My Dad was a tough motherfucker. I learned to be a Man by a tough motherfucker. That's what I teach my boys, Be tough, but be kind. That's the way we're gonna do it, yeah?" The crowd roared back, "YEAH!" in agreement, as that speech was backed by the jazzy music of "Thank You, Boys", which Perry shouted at its end.

"Pigs In Zen" fried all of our minds (at least I think it was because of that song), super heavy and certainly played by tough (and KIND!) motherfuckers/men. The cheers were deafening when that one ended (as it finishes the album) with Perry saying, "I need some more booze, I'll be back!"

Same for us, and when we all returned, it was for the rocker "Been Caught Stealing". This one featured Mrs. Farrell (Etty!) and Melissa Vela Bailey dressed for Vegas in big showgirl headdresses, and little else, making it even hotter in there. The dancers threw casino chips out to the crowd (as the band melted faces), endearing themselves even more. 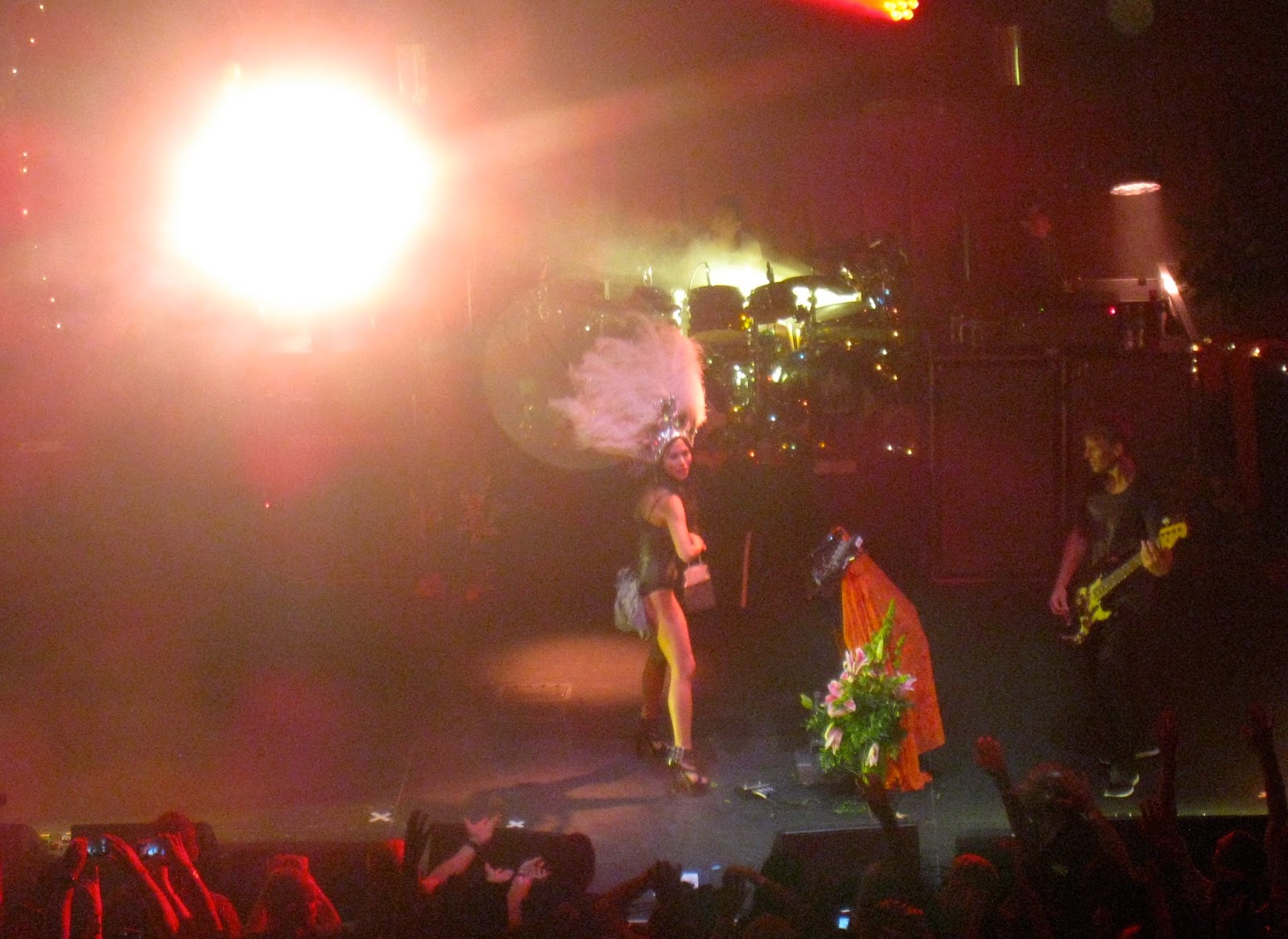 Then the real "3 Days" arrived ... a scorcher. Dark and ominous, sexy and dangerous all at once ... the fans were beside themselves. At the end of the whole menage-a-troisvaganza, Perry and Etty made out so long and for real that Etty looked a little breathless as she left the stage. I love it. REAL love between a husband and wife, for all to see, enjoy and envy. This spectacle of a show was truly inspiring on so many levels. 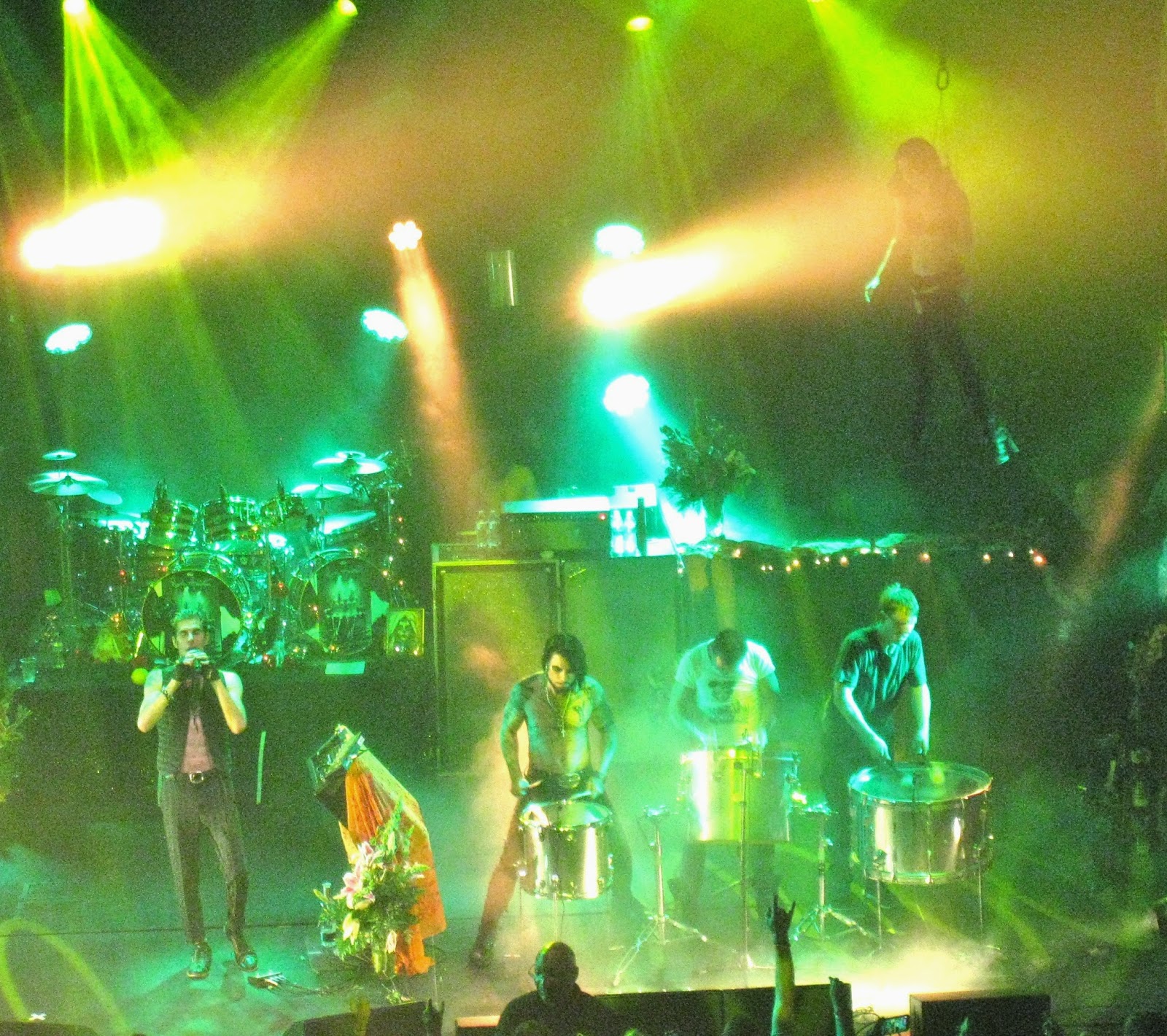 "Stop!" = "NUTS!!!" in my notebook. So fast, so frenzied, so opposite the title ... you just want to GO. We were all sweaty messes at this point, but all stops were pulled out by band and audience alike as they lit into "Chip Away". Navarro, Chaney and Perkins were all lined up front of stage banging on big drums in unison, as Perry screamed his way through this other-worldly superjam. Suspension artist girls (skewered through their shoulder blade skin!) swung high above the stage, and there was so much coolness going on that you didn't know where to look. 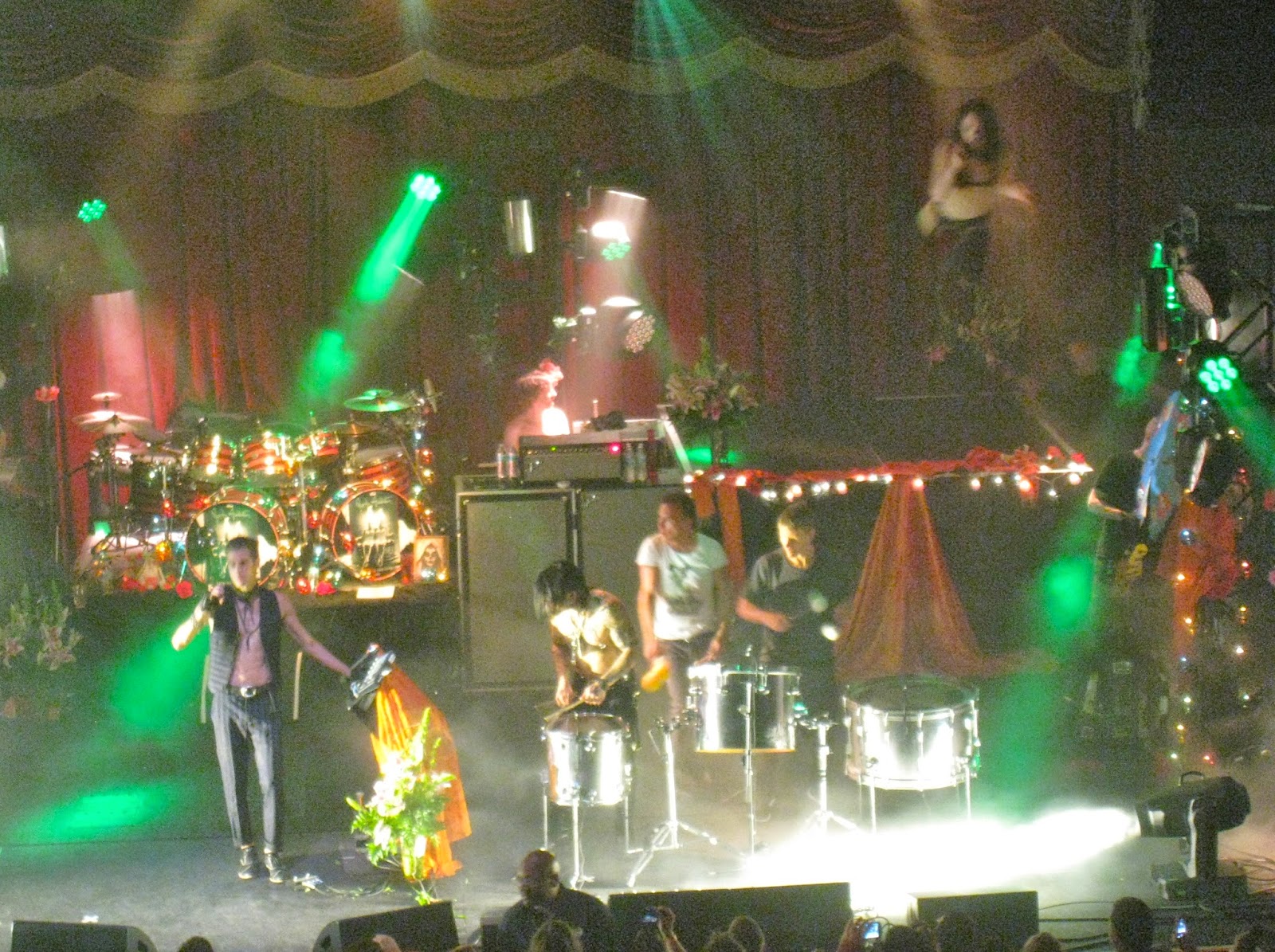 And then it was over, but no one wanted it to be, not even the band. They took a group bow together, earning ear-splitting shouts, claps and whistles, but still, no one was going anywhere. 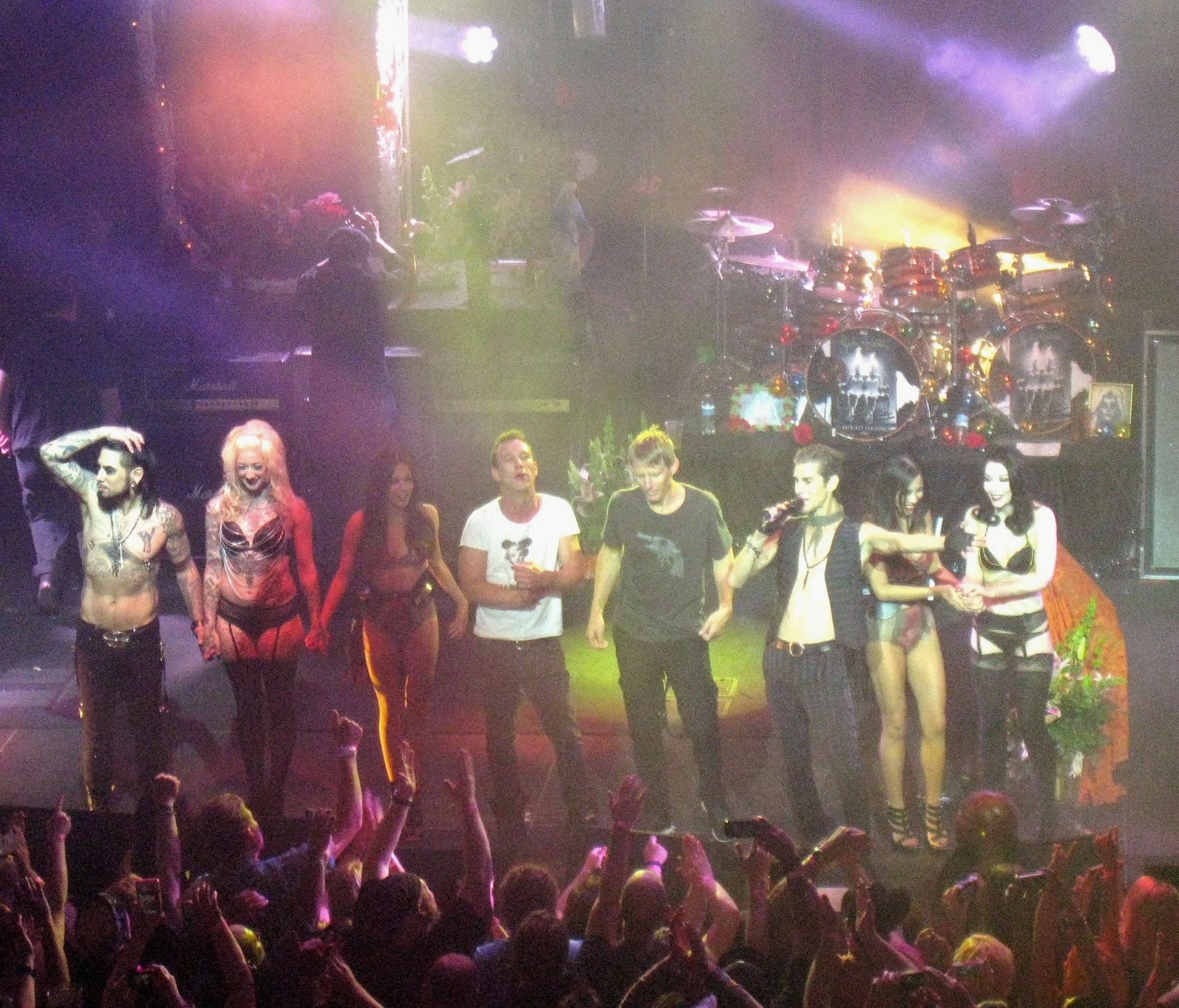 Long after everyone else had left the stage, Perry and Etty stayed behind, shaking hands and handing out all the flowers from their vases. They know their fans love them, and they love them back. 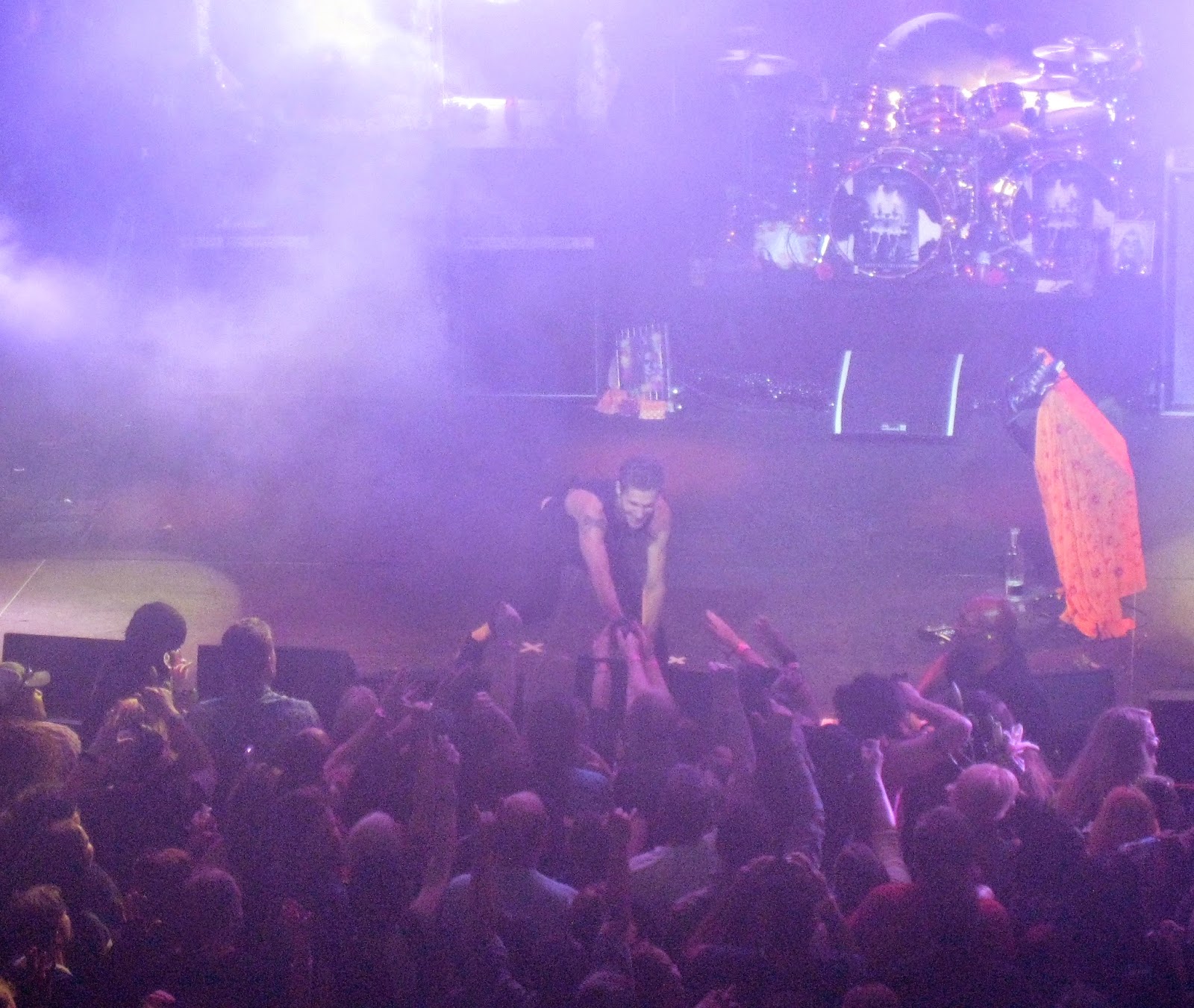 Backstage after the show, this remained as true. Friends and fans came back to greet and thank them, and as effusive as they were, the Farrells and company were equally as thrilled ... at what had truly been an EPIC 3 Days.

Thank you to Jane's Addiction for 25 years of rocking us, and by doing so, uniting us.
NEVER Stop!

(*And special heartfelt thanks to the Farrells for again welcoming me to the show!      Love you.)