Whoa. Last night was one for the books at The Mint in Los Angeles. It's fun when you're friends with everyone on the bill, and last night's acts are some of my dearest. The occasion was the (east side) cd release of Tom Freund's The Stronghold Sessions double live album, and also the (east side) debut of Sister Lacey Cowden. PLUS Chris Joyner. We were gonna tie. one. ON. 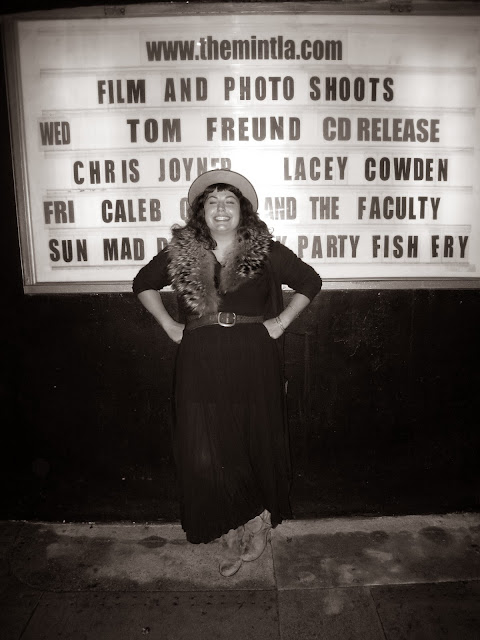 After some catch up time with a slew of mutual friends, Lacey kicked off the show, saying "This will be on my ep coming out in January, so hold on to your nipples!" She bewitched the room with one of her tunes that will stick in your head for days - like it's given me insomnia before - "Shotgun Lovin'". Cowden grew up in New Orleans and Hawai'i with some Santa Cruz in there too, so she's a wholly original mix of southern fire and mellow artistry (she's a beautiful visual artist too).  When she dedicated the next one to her "Sugar nipples, Brian" (ha!) you could sense the room quieting down to catch every note of "Walking Song". By the time she laid "Honey" on us, the room was hers. 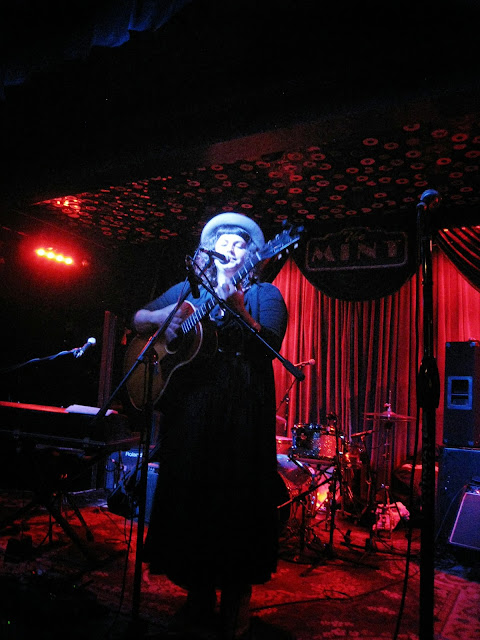 "Sweet Lord Jesus! Let's go walking through Hell right now! Let's do this shit!" was Lacey's reaction to all the applause, which kind of fired the room up to noisy again as folks felt the rowdy - and by now, their whiskey. The Devil doesn't want me 'cause he knows I'd give him Hell. Badass. She ended with her gorgeously touching, "Southern Boy", but not really, because the whole room shouted "One more!" No one louder than me. "Well, I'd do anything for CJ (Mahalo!), this one's for Matt Ellis, it's his favorite." (Ellis is producing Cowden's debut ep. I've heard snippets. It's fantastic.) 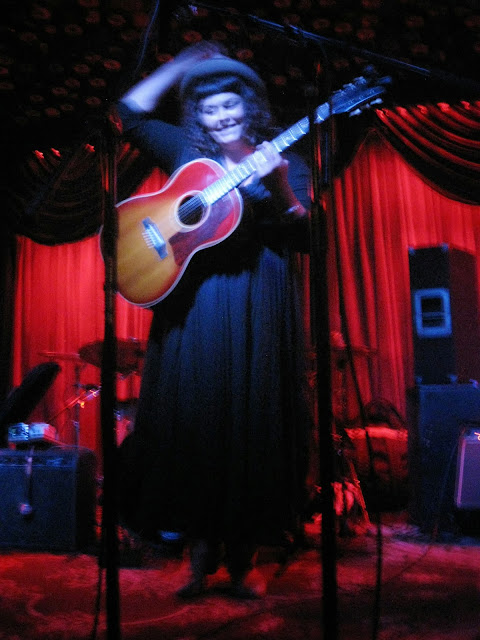 Godspeed me out of this town ... feet don't fail me now ... I love Lacey's lyrics equally as much as her voice and playing. She is a treasure, and the by now larger and louder crowd let her know it. It was a mad impressive first real show, and in the words of Tom Freund, "She crushed it." High praise.

Chris Joyner (the original CJ)  played a stellar set that was a complete blast to watch, because he's always so good, but because the antics of guitarist Tim Young playing along were so animated you had to just stare. It was fun to watch Joyner watching Young with a big, rad smile - both of them getting it. Joyner said they were all new songs, so I don't know any of the names of them - but now I have his cd so I will soon! My friend, Liz Singer summed up his jams thusly: "It's rhythmic enlightenment with sexually charged lyrics." Bam. 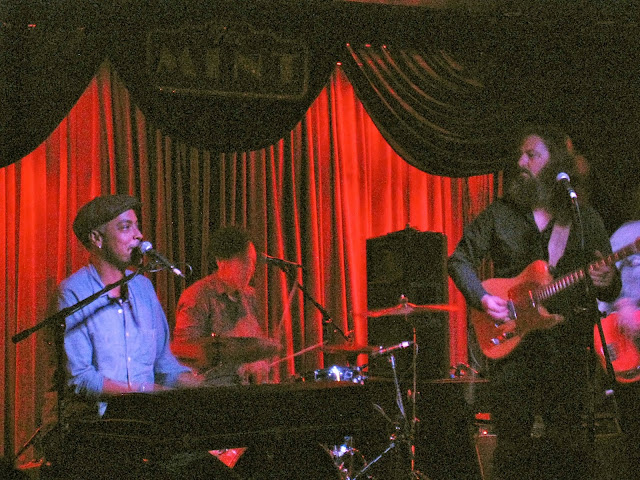 By now everyone was extra fired up, and when Tom Freund took the stage (with the awesome Michael Jerome Moore on drums, Gabe Noel on bass, and Joyner back on keys - Tom was on literally everything else ... guitar, mandolin, stand up bass, a shoe - just kidding), the party was ON. (So you'll have to forgive my less than thorough set list). It was a complete jam of musicians' musicians, playing at the top of their game and completely grooving off of each other. After blazing through "Not In The Business Of Knowing" and "Wounded Surfer Boy" (a total Venice jam - where Tom also lives - with lines like He's the Mayor of the neighborhood, he rides around on a skateboard ... Freund had to stop to say, "I have such a good band that they make me better. Everyone should have this band, but they can't." SO good. 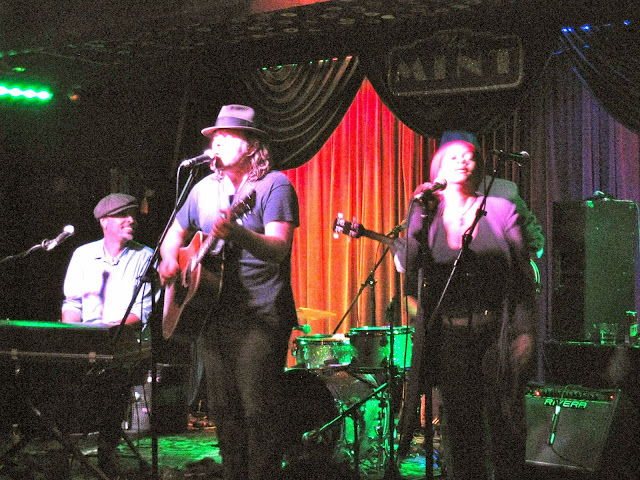 "Ghost In This Town" was total excellence and I wrote next to it in my book, "Everyone is going crazy!" But I knew nothing about crazy yet. Right as I was watching and saying to a friend, "You know who I love to watch play - Gabe Noel," a guy that you could tell was INTO it said about Noel, "That is some deep motherfucking shit right there." He told me I needed to move to hear the bass better. I did, and he was right. DEEP.

Ladies Heather Donovan and Suzan Postel backed up Freund singing the lovely and sad, "Why, Wyoming?" and I was reminded of a friend saying about Freund, "Most musicians in this town aren't qualified to carry his instrument cases." Seriously. "Digs" backed that up even more.

Tom is doing a Pledge campaign to help fund his next album (in progress and sounds CLASSIC) and said, "If I don't mention this, CJ will kill me," (I've been helping him with it, and it would just be a maiming, not a kill) and gave this little  - and true - speech:


"Angel Eyes" says You make it possible to do the things I do ... so please go here and chip in on the future fun. Thank you!

*(Because you better believe THAT cd release party is going to go even crrrrrazier.) 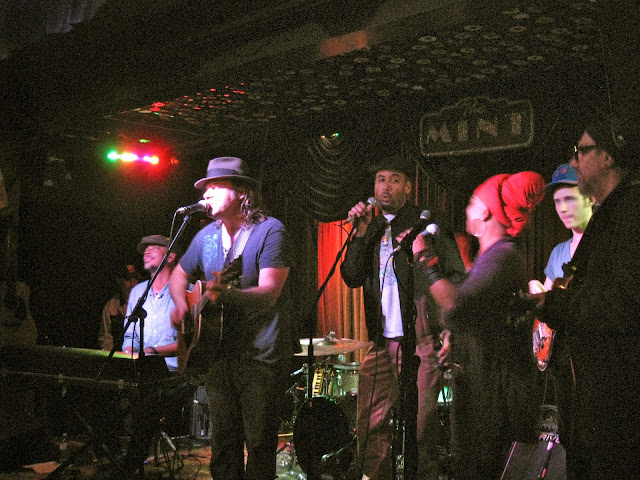 The beautiful face and voice of C.C. White appeared and she and Freund WAILED on "Come Together" and Joni Mitchell's "A Case Of You".  Bliss. Which only grew when Ben Harper (two days after his astounding Disney Hall show) came on up to join his old friend for "Collapsible Plans" (also the name of the album Harper produced for Freund). "This is the kind of shit that happens at The Mint!", said Freund truly. After playing together for so long, these guys have it DOWN. Watching and hearing them harmonize together, my heart felt full. We'll kiss in the puddle of the sky ... Sugar don't get no sweeter than this .... Nope. 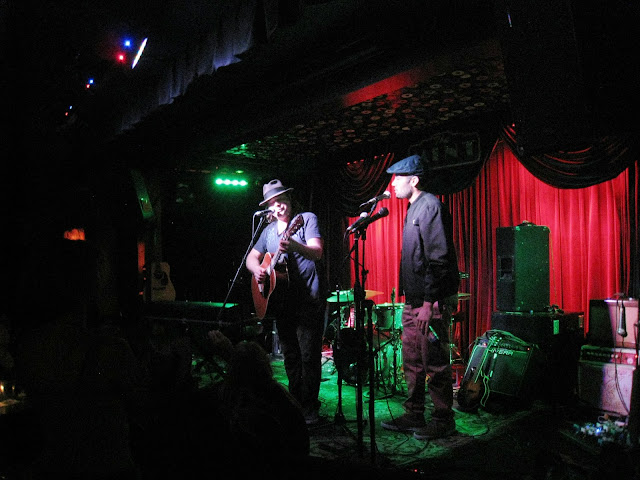 The roof of the poor Mint blew off when the whole gang (+ and Steve Postel and Marvin Etzioni) threw it down for The Who's "Let My Love Open The Door"! Between C.C. elevating every note played, and Ben and Tom singing their lungs out and the band totally dialed in ... just YIKES.

I don't know how they brought the vibe down immediately for the silence that met their stunning "Copper Moon", but they did it like magicians. It was so pretty I want to time travel back to that moment right now .... 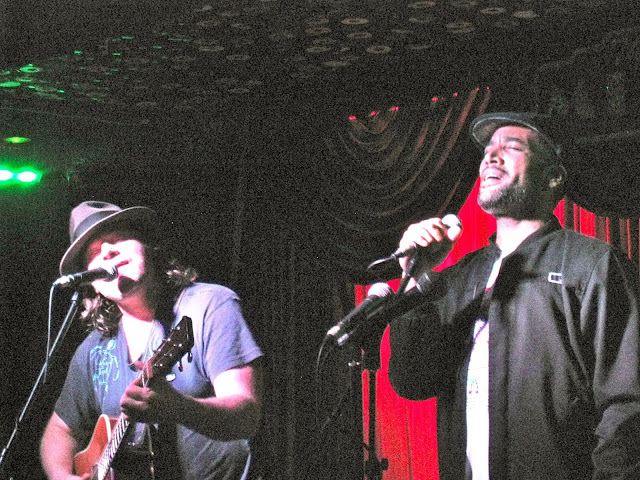 OK, I'm back. And so was Freund to play one more, his all-time great "Francie" that features his blistering mandolin solo that builds until his hands are one big blur. Which the night was also becoming by this point. 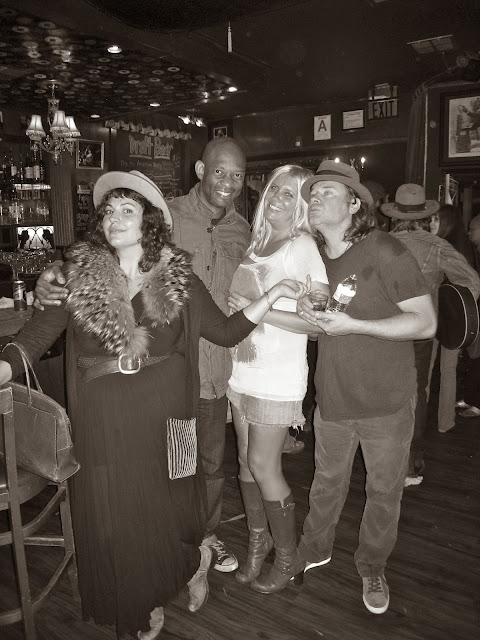 What a great time. Performers, partiers, and The Mint alike simply killed it. Good job, everybody! WELL worth the trip east of Lincoln. Thank you, MUSIC - for being the reason for it all.
Posted by CJ Gronner at 3:12 PM