I look forward to Halloween on Rialto Avenue in Venice for the sense of fun everyone comes together to create each year. All the differences seem to melt away - or be concealed by a costume. And it's a party. People went all out this year, and the street was packed from dusk on. Eerie organ music started playing from a neighbor's house shortly after 3 p.m. ... setting the tone for the evening nice and early. 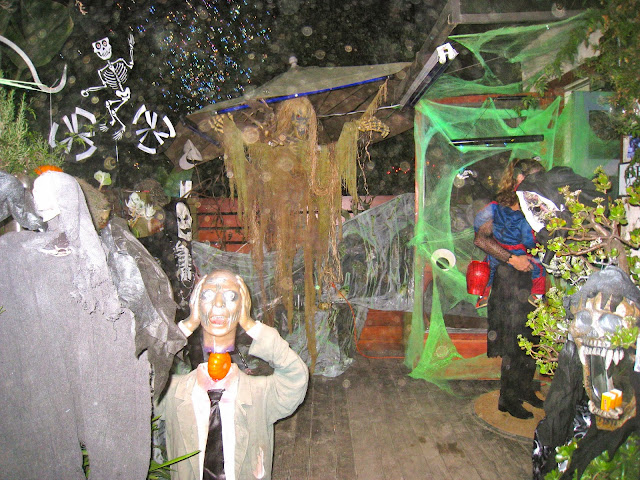 I like to walk the entire avenue, down and back, to see what the residents have out-done each other with this time. It's fun to go on the earlier side so you can see what all the little kids are dressed as, before the grown-up party carries on.  The first tableau was a road-side cemetery that was scary. 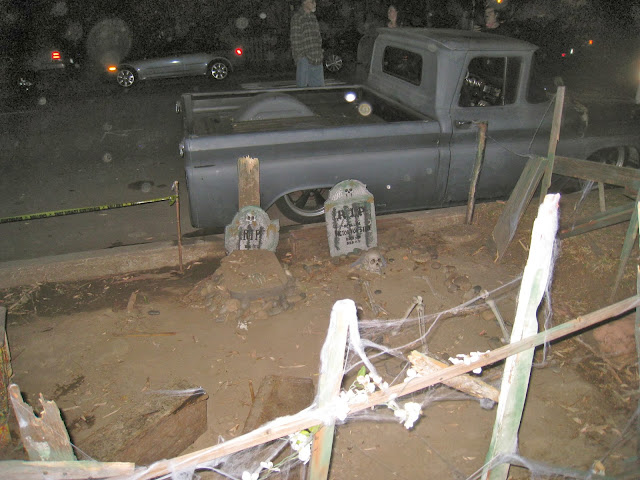 And so was the smashed person underneath the truck. 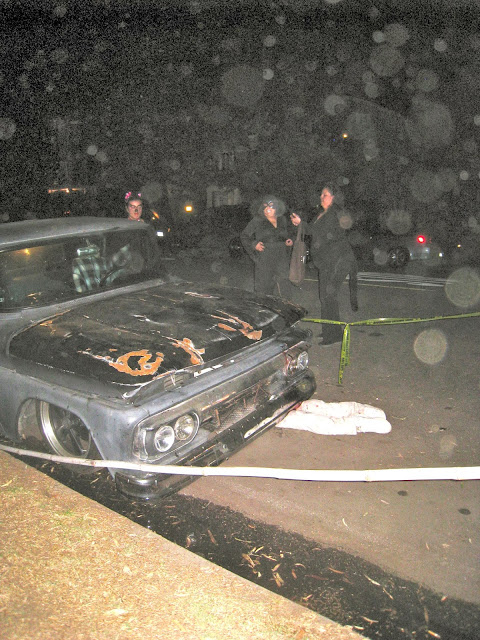 Each house was more elaborate, with a lot of neighborhood participation. I'm really not sure how the tradition on this block started, but I'm so glad it did, and has been carried on so faithfully. 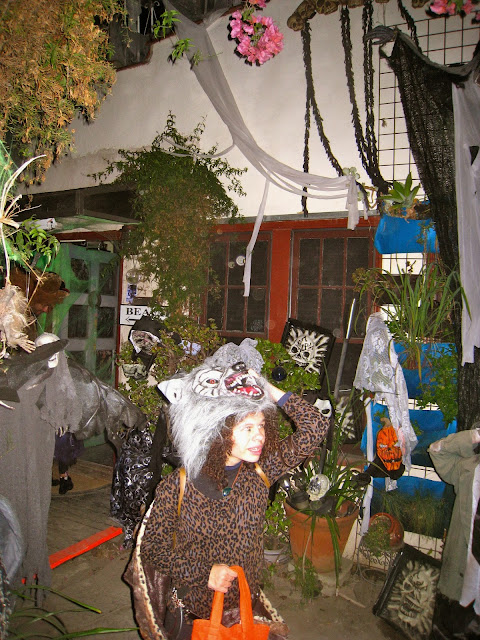 No one was afraid to be actually scary, as these guys illustrate. One little girl was actually sobbing scared ... and everyone laughed. Uh oh. Scarred. 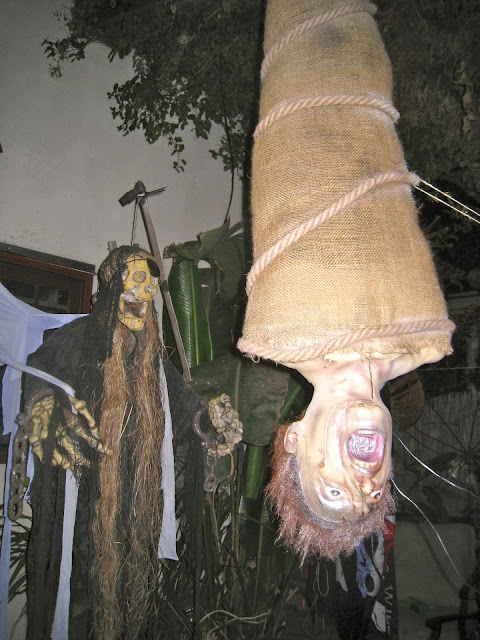 My friends Russ and Harry told me that they went through 70 POUNDS of candy, and that was only like 8 o'clock. Kids were GOING for it.

I liked this cheery little scene, especially the jellyfish. 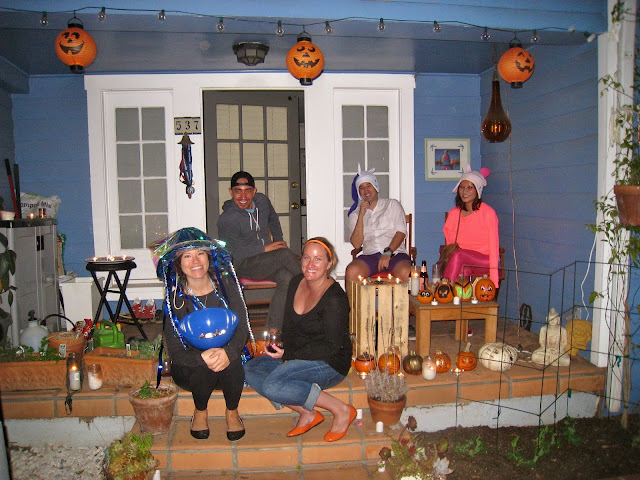 Lots of people were in - and stayed in - character. 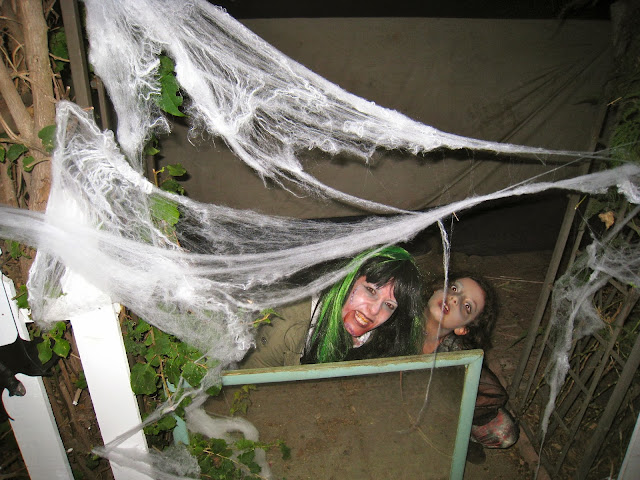 I did not see The Great Pumpkin. Or Linus. 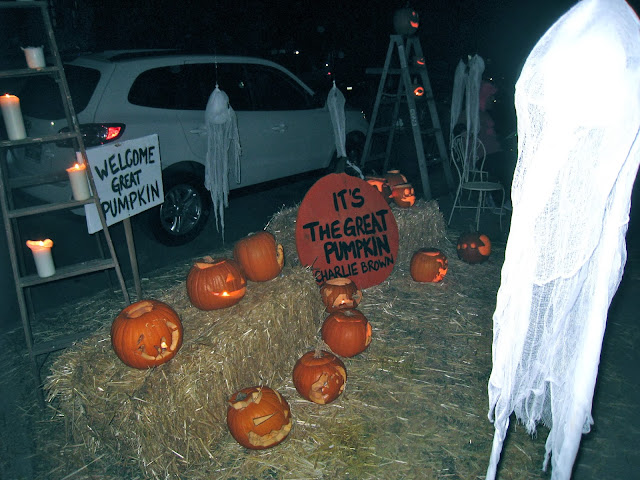 Spooks and ghouls blended in with tropical flowers on an autumn night that was quite balmy, with just a little mist. But that could have been smoke machine stuff too. 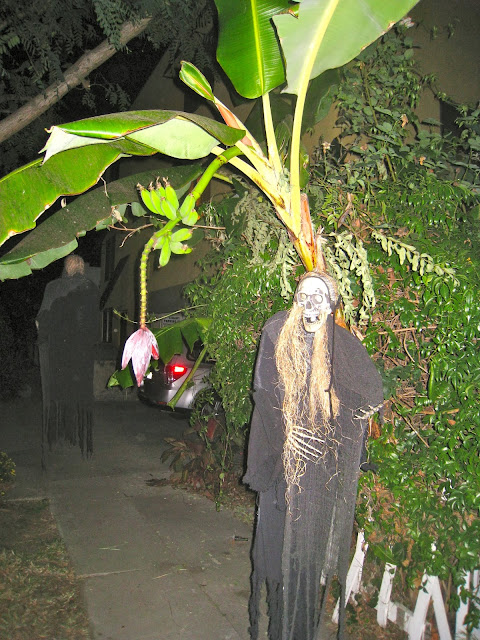 Ghosts and pumpkins kicked it with Bud Light. And parents escorting their children along the sidewalks carried "coffee cups." 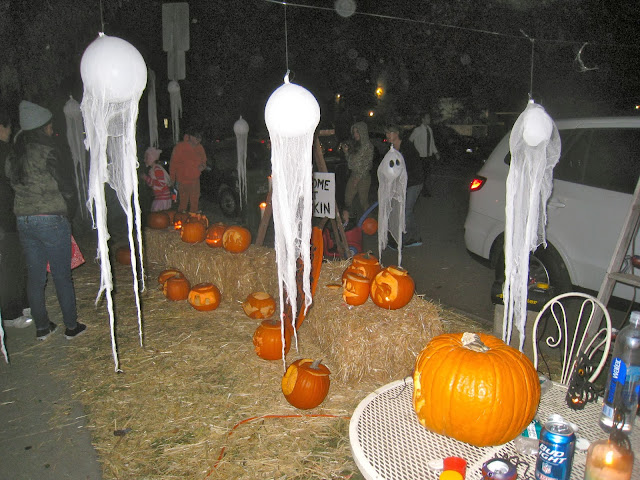 A live band in costume played in the driveway of one house, and tired trick or treaters flopped down to start taking inventory of their bags. Buzzing. 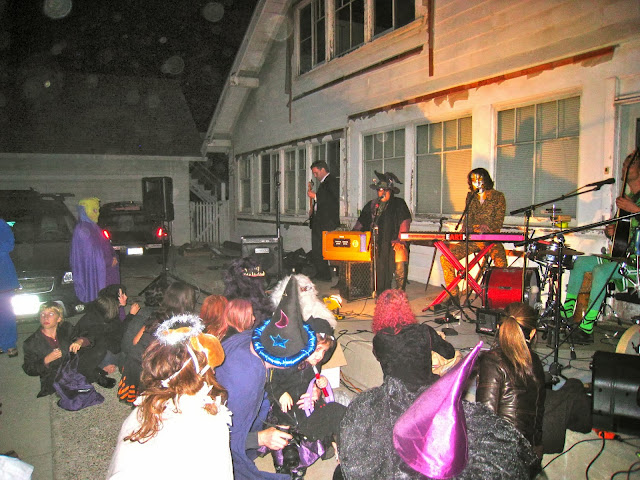 Cobwebs were very popular decor. So were bubbles and lasers. 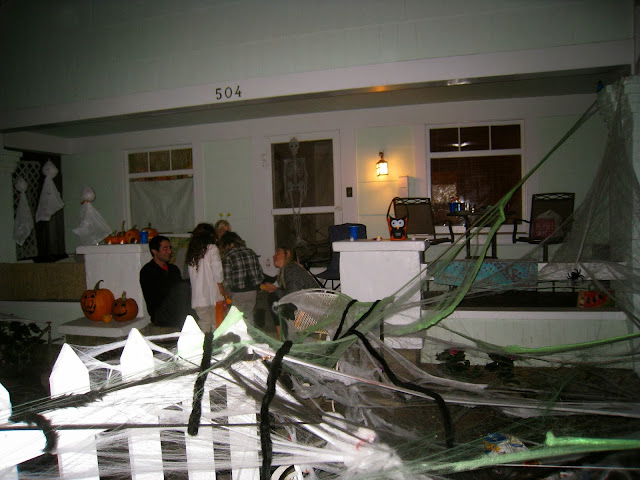 Another cemetery, and tons more candy. 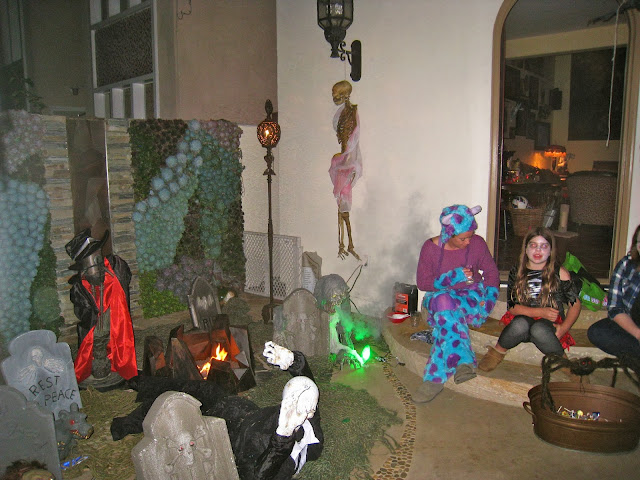 This house was extra done-up and the people seemed fun. That's another cool thing about the Rialto Halloween ... that you get to know your neighbors, and everyone is very welcoming and open. It feels nice and old fashioned in that way. 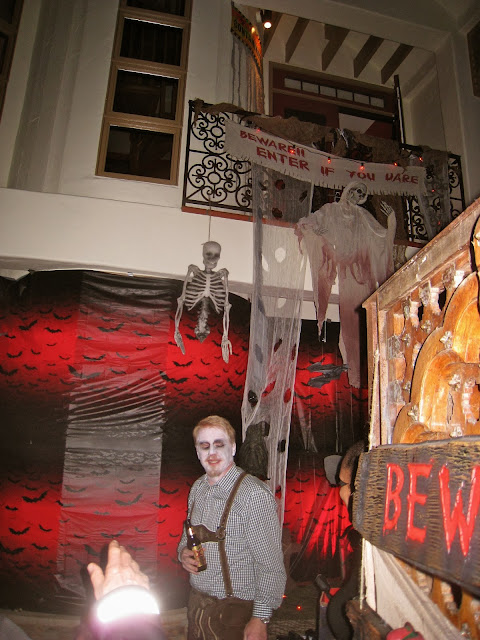 I saw a few sock monkeys, but this one was my favorite because look what she was holding! Snuggly babies were all over the place, in cozy costumes that almost gave you cavities to look at. So sweet. 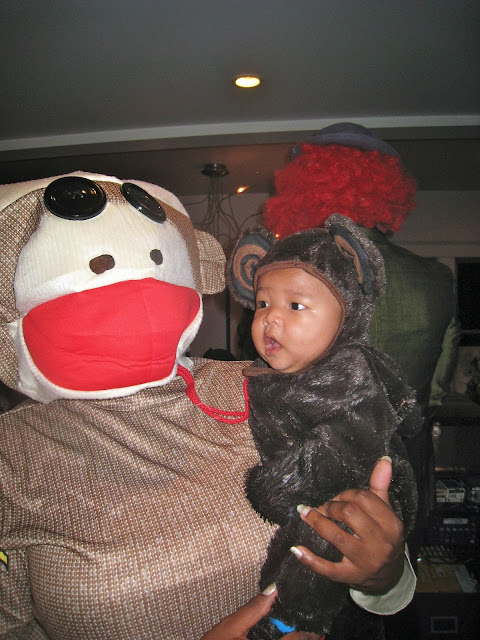 I like witty costumes, and these two were a couple of Smartie Pants's. There was also a Murder of Crows, but that picture didn't work out. 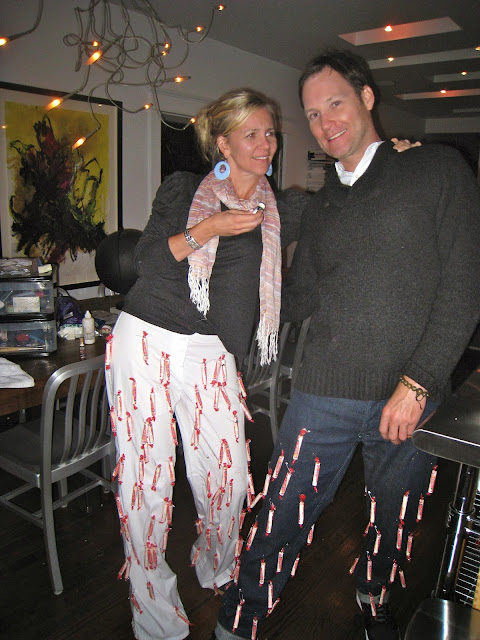 After all the candy was given out, and bushed children were shuttled home, music was turned up and libations were enjoyed, with friends and strangers/new friends alike. Another delightful Halloween on Rialto ... Another delightful Venice tradition that people come together to preserve. Well done, All! 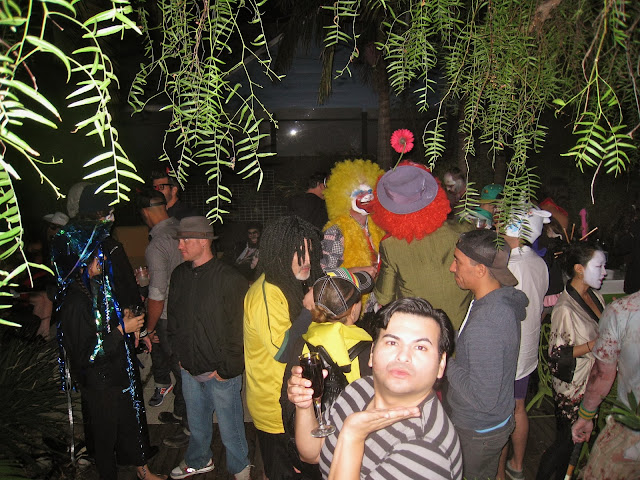 And the My Favorite Costume award goes to .....  The Lego Person! Great one, Arianna! 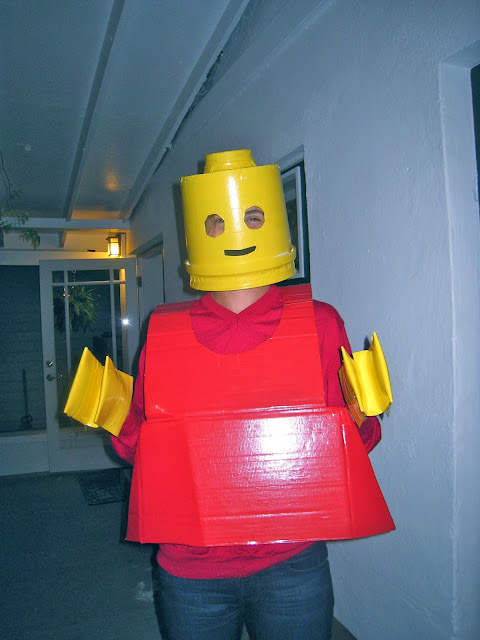