Last night was the March Venice Art Crawl, and it was great. It kind of felt like First Fridays used to feel, where you saw a lot of locals and neighbors, and places served up free booze and music. The Art Crawl is actually better than First Fridays used to be, because the whole point is to appreciate local art ... the very reason Venice became cool in the first place. 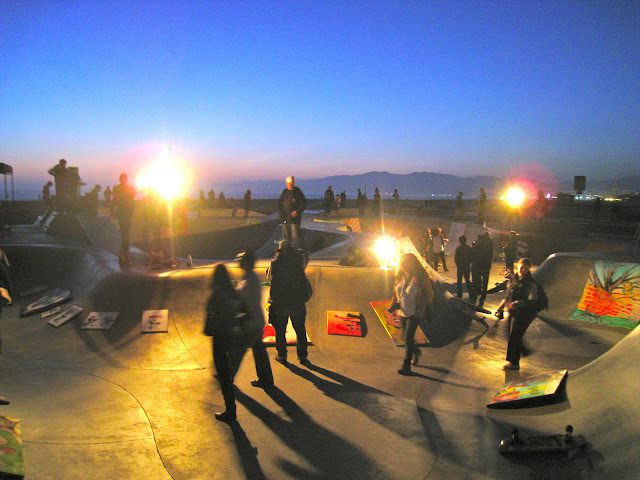 Cool doesn't begin to describe how excellent it was to approach the Venice Skatepark just after sunset, seeing it all lit up, with a DJ blasting out good jams over the entire Boardwalk. They built a little entrance ramp so that people could go down in the snake run of the park, where the art of Mark Farina was hung. 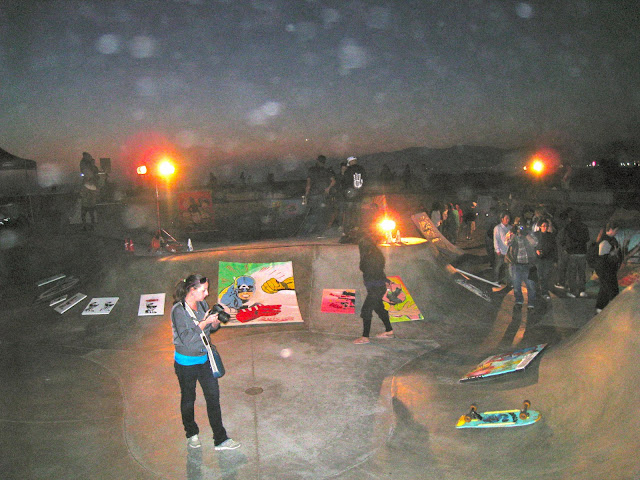 It was a party, seeing all sorts of familiar Venice faces and catching up, all while checking out the brightly colored and highly political pieces from Farina. 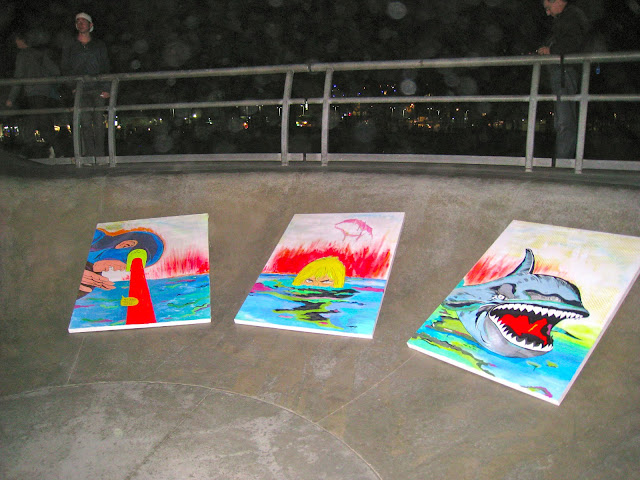 These are the kind of original, fun ideas that make Venice special, and the kind of things we NEED - to show the world that they can keep their corporate chain stores and hum drum sameness. 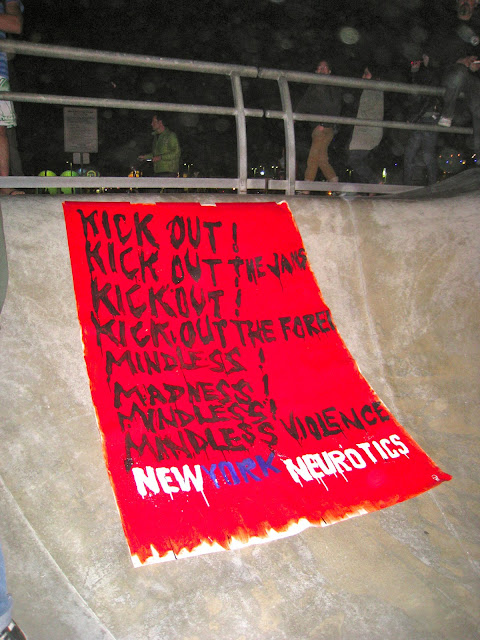 WE have art openings IN skateparks. Bam. 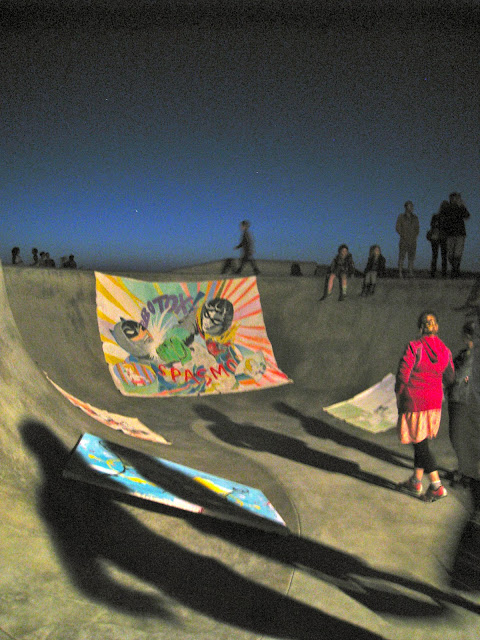 There was a lot to see and do, so I had to crack the whip and keep us moving along ... to Small World Books next. 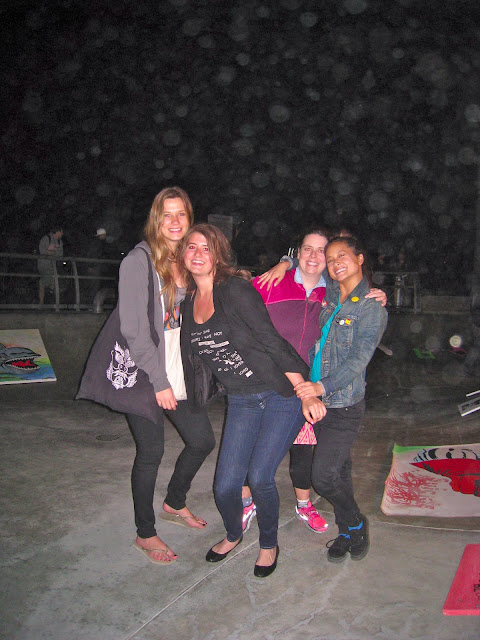 Among all the zillions of books I covet every time I walk in the best book store in the West, I now also want one of the pieces by Christina Mills showing at Small World. 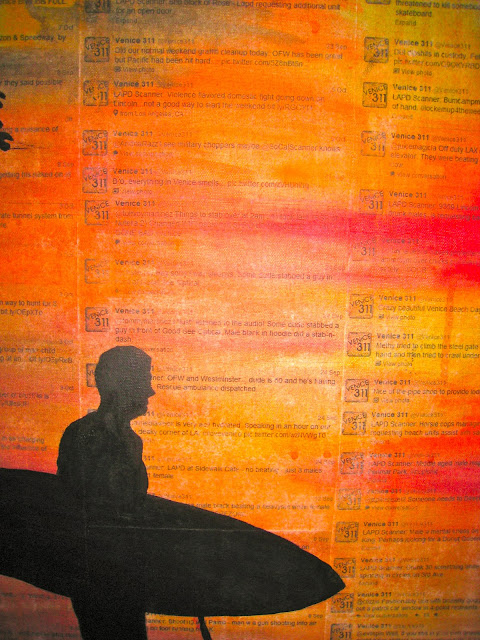 Her work feaures the typical Venice scenes, with surfers and the Venice sign type images, with scads of tweets from Venice 311 behind them ... truly an example of "Where Art Meets Crime." 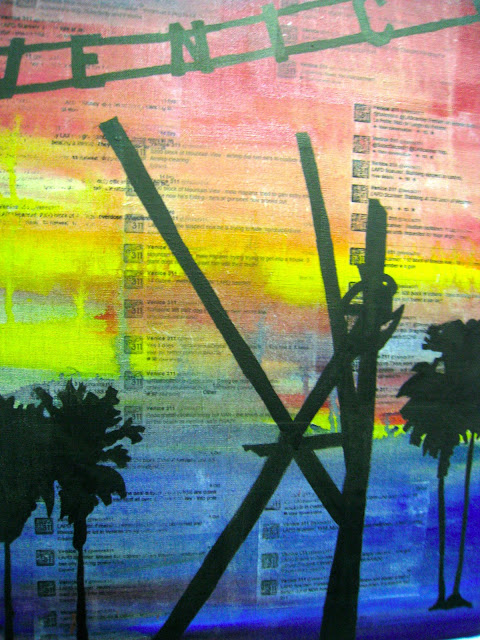 On to The Gallery on Market Street, where we saw the gorgeous photography (featuring a bunch of Venice neighbors - Tawney! Shawn!) of Nicol Ragland. 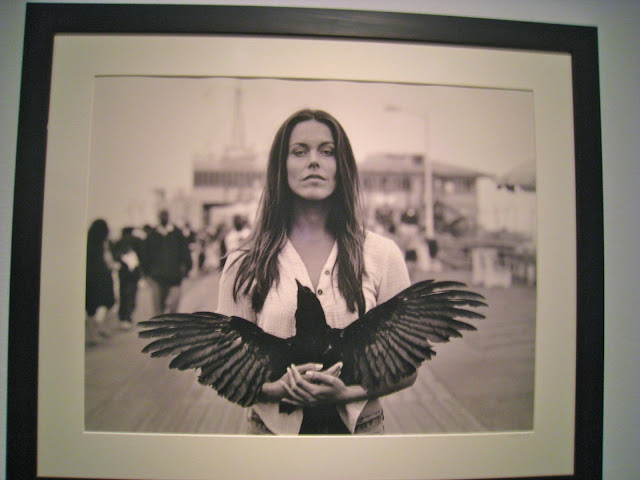 The sign said, "A photographic exhibit raising questions about our ability to access primal and immaterial forces within the commercial ethos of western industrial society. The images stir a vital and confrontational animism by juxtaposing taxidermied wild animals in the arms of domestic U.S. citizens provokingly situated in the iconic centers of mass commerce." Phew. That's weighty stuff ... but the photos sure were lovely. 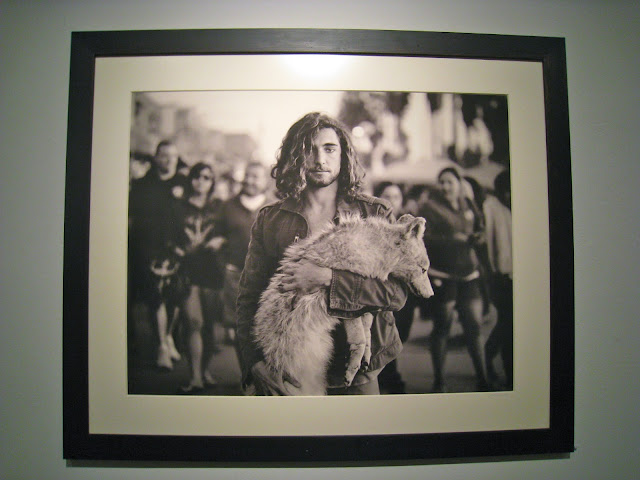 We stopped in to see my girls at Kiki Designs (and spied even more cool rings we all wanted) and raise a glass, then did same at Gotta Have It, where the lovely Venice native, Mattea Perrotta, was showing her work. I knew almost everyone I saw, making it such a delight to be out and about, among friends.

Art was everywhere, and it was hard to take it all in when there was also so much socializing to be done. We did pretty well, but did get to Shulamit Gallery a bit too late to fully enjoy it, since they were kicking people out. 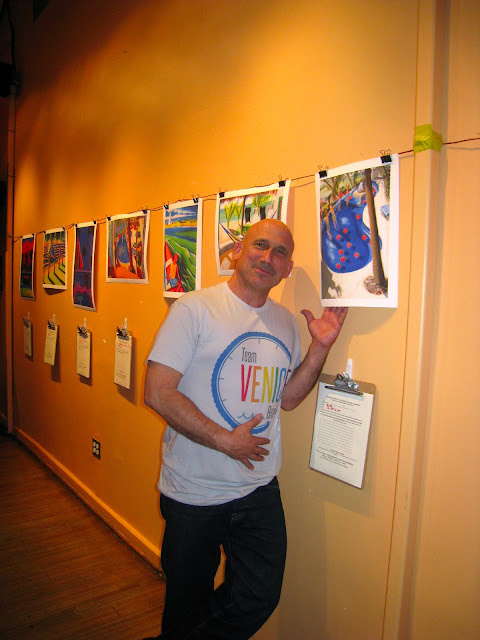 James Beach had Shark Toof and Tom French work featured - always a pleasure - and across the street at the Canal Club, owner Danny Samakow showed his very Venice paintings, that he was auctioning off for his upcoming AIDS Lifecycle Bike-A-Thon. We drank champagne with "Team Venice" and I soon found myself being the person that drew the raffle tickets for the lucky winners of Danny Samakow originals. We had a blast with the boys, even more so knowing that it was all going for such a good cause (that you can still donate to. Contact Danny.) 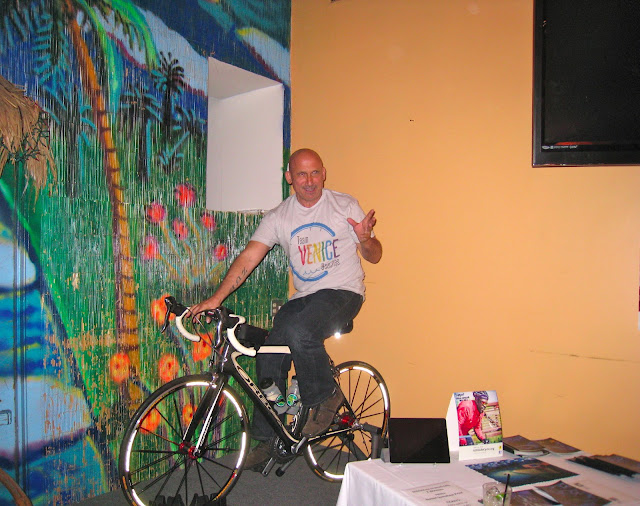 We covered a lot, but we didn't cover it all ... so there will be a lot to look forward to when the next Art Crawl rolls around June 20th. The night was starry as we strolled back home, way later than I had planned. We passed underneath the Venice sign again, and I smiled to myself that I get to live here, where there are still staunch preservationists of what is truly cool, proven by nights like this.

I love you, Venice. (We say that a lot here)