A Quarter Century of Hal's

Hal's Bar and Grill is celebrating 25 years on Abbot Kinney in Venice, and loyal fans turned out Wednesday night to hear Linda and Don Novack and Hal Frederick in discussion with Jeff Gordon from the Writer's Boot Camp (and Hal's regular) at the Electric Lodge. It was packed with the fine folks that you can regularly see bellied up at Hal's, eager to hear and share stories of the many years of fond memories. 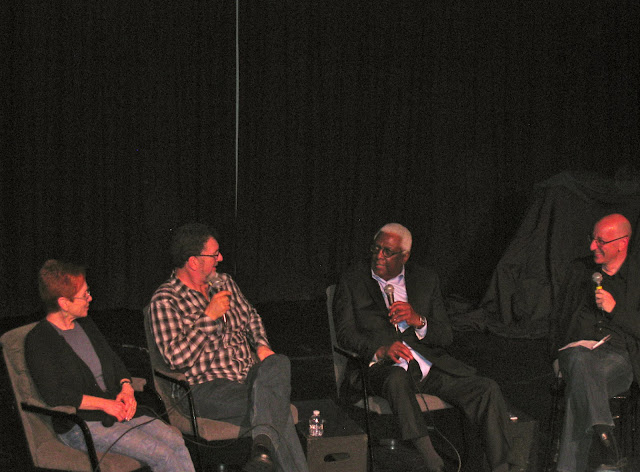 They opened up with the question, "What was Venice like 25 years ago?" to which an audience member piped up, "It was GREAT!" You could tell that most in the room were nostalgic for times when it really was more about the people, and the art, than the great money grab of the present, which Novack commented on, saying, "The street's gone crazy." True story.

Escalating rents are pushing out many of our old standbys, and a rumor was flying recently that Hal's would be another victim of the greed, but that was put to rest with a relieved sigh. This night of story-telling was pure appreciation for a true neighborhood landmark.

I knew many of the stories from having done an article on Hal's a while back, but it was a delight to hear all the locals chiming in with their 2 cents, in what became sort of an open forum. Artist Ed Moses made the room laugh when he said, "The food is always B+, which is very good, always consistent, I love the Chef (Manuel), and that's why I like it." Meaning that Hal's food is very good, and he didn't WANT it to be A+, because that's for foodies and that's what makes you not be able to get a table, and what brings all the people from all over, not all your favorite people in town that you can catch up with whenever you want. For instance, Don got more laughs with, "I love Gjelina. If people can't get a table, they come to Hal's for B+ food." Which happens a lot. Which is great for everyone. (If they can find parking ... which is why locals should walk or bike and take it all back over again). 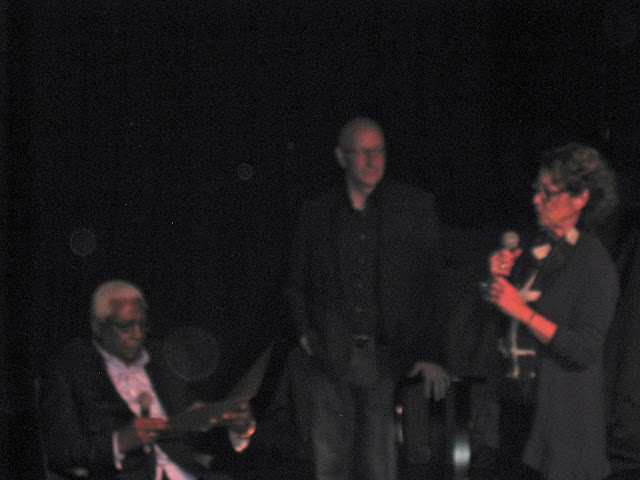 All in attendance agreed that Hal's has been the center of the Artist's community in Venice, and as Linda Lucks of the Venice Neighborhood Council decreed (with certificates handed out), "Hal's is the unofficial City Hall of Venice." Another audience member said that no street has gone through as much change, so quickly, as Abbot Kinney, not even in New York ... and the locals come to Hal's to feel comfortable. And they do. Because of the consistent menu and local favorites - we learned that their famous (it has its own Facebook page!) turkey burger is due to Stockard Channing wanting a burger back when they were not on offer - to the familiar faces and warmth extended from everyone involved in the operation. Hal's is clearly a local treasure, and has been since they opened their doors back in the 1980's, when its address was the hard to locate West Washington Boulevard.

Local artist Peter Lodato spent a lot of time in New York, and he said that when he arrived back in L.A., Hal's became his spot because, "It felt like home." Don Novack added to that, saying, "Venice has STUFF. Grit, like New York." At least it always has, and God willing, that will remain in spite of the best (worst) efforts of the developer vultures circling. 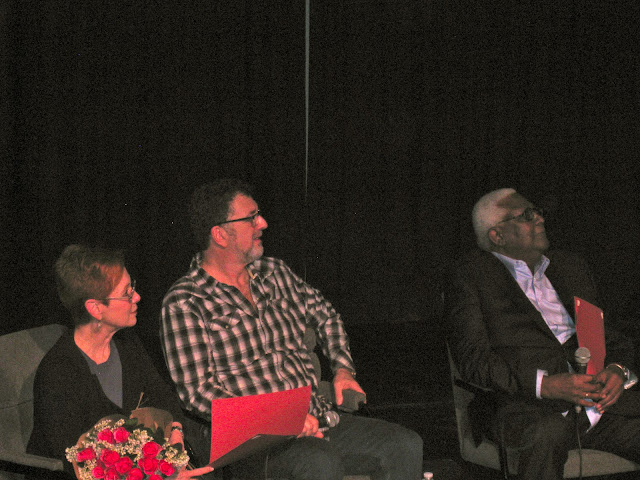 Certificates were given, lovely Linda Novack got a beautiful bouquet of roses, and all the artists and locals in the Electric Lodge were thanked by the grateful panel from Hal's. Then we all ambled across the street, to get swept up in what Frederick called "The Mix" in the bar at Hal's. "It's ALWAYS been about the mix." By which he means, everyone is welcome ... struggling artist, millionaire artist, all ages, all races, all genders, all sexual orientations, any and everyone is in the mix. ALL will be welcome, at this beloved place that is "just a restaurant, but NOT just a restaurant ... it's so much more." It's Hal's.

Congratulations to all the Hal's family on 25 years of great times in Venice! And many more.