Jessica Luk at Spa Sophia - An Oasis on Abbot Kinney

I'm a lady that enjoys a good facial. "Good" would not do justice, however, to the one I just had from Jessica Luk at Spa Sophia on Abbot Kinney, right up the street. I didn't even know the little haven of peace and beauty existed until my friend Jessica started working her magic there. It's tucked in up a staircase above Primitivo restaurant, yet you feel like you just wiped the sand off of your feet at a friend's comfy beach house. 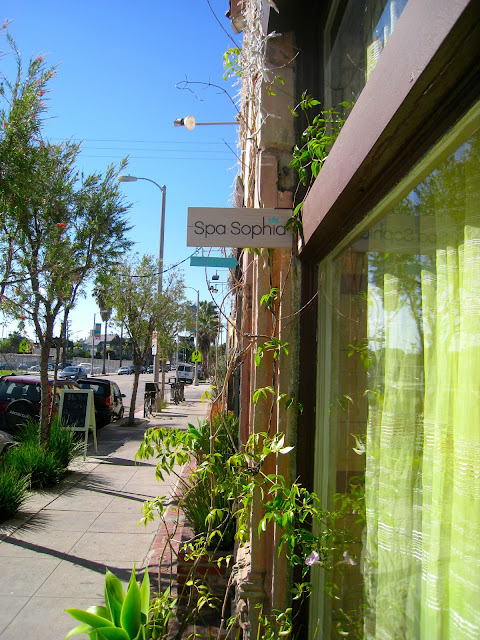 Luk is a California native, who grew up in La Cañada. She always knew she wanted to work in the wellness field, but it wasn't until she had a corporate job (and all the stress that went with it) that she really honed in on what it was that she wanted to do. She found that her own facialist really helped her detach from the daily rigamarole and feel good about herself, and figured she could pass that along to her own clients one day. After attending esthetician school at the Aveda Institute (Great sign. I've only used Aveda ever since I had hair.) in San Francisco, Luk got licensed and moved down to L.A. with her new husband, Tyler.

Doing her research, looking for a place to work, Luk found Spa Sophia. It fit right in with her desire to work in a place that was small, intimate and holistic vs. some big scenester spa ... a place where you really know your clients, and what they need. She came in to meet with owner, Sophia Marzocchi, they instantly clicked, and Luk started giving the excellent facials I'm about to tell you about last fall. Then Tyler got hired as a bartender at The Tasting Kitchen, so the darling couple book-ends Abbot Kinney, and we're lucky for it. 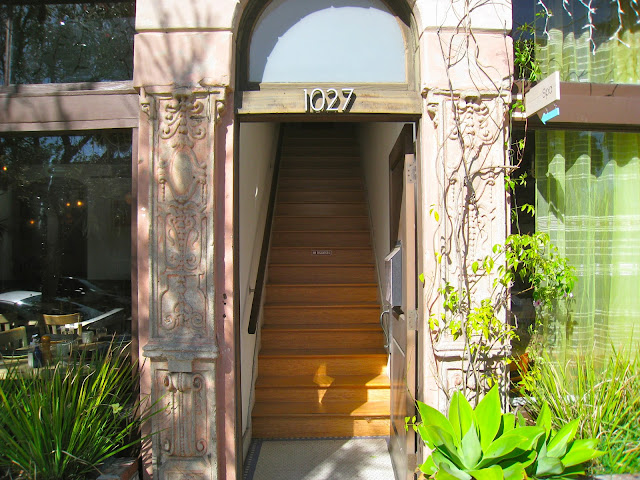 I walked upstairs on a sunny Venice morning, and Luk showed me in to the light, airy room where I was to be pampered for the next 90 minutes or so. I wanted it to be my bedroom at the beach ... all painted white with exposed beams and black and white surf photographs on the wall. Sun streamed in and the trees outside waved their branches gently, already creating a relaxing atmosphere.

I got naked and climbed under the crisp white sheets and soft, furry blanket to settle in for this highly anticipated treat. I'm not one who really likes to talk - at all - during facials and massages and stuff, as I feel like it kind of defeats the purpose of total relaxation. Luk completely honored that, aside from gently telling me when things might tingle, "feel pressure" or freak me out. She was so gentle and calm, but surprisingly firm during the massage parts. She is so tiny and adorable, you wouldn't think she could get into those knots like she does. The perfect combo, really. 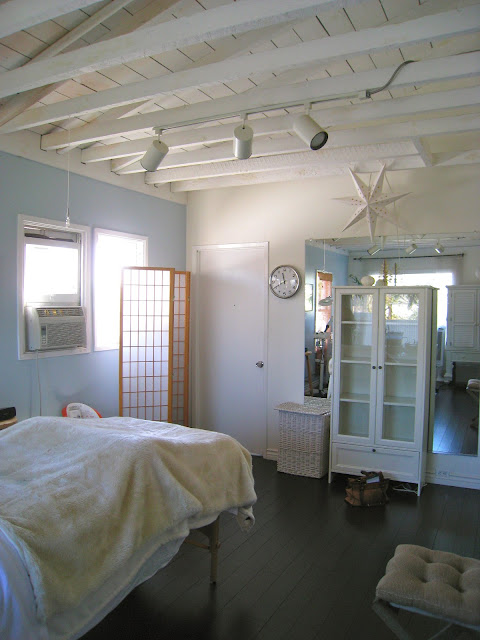 The products smelled great, the classical music played softly, and soon enough I started to melt away into the process, not even thinking about the myriad things I wanted to accomplish on this day - a real miracle! As Luk said, "The more relaxed a person is, the better the facial, the better their skin." Suffice it to say, the facial and skin were waaaay better after this business. There was a moment when Luk applied a "Cinnamon peel" to my face that it tingled/burned almost to the point of not being able to take it. I breathed deeply, and I swear to God, I focused through my third eye and went into some kind of mental tunnel that I can't even really describe because I don't even know what I just said means. But I did. Then Luk started fanning over my face and just as soon as I went into that wormhole, I was back, hearing birds chirp outside. I swear. 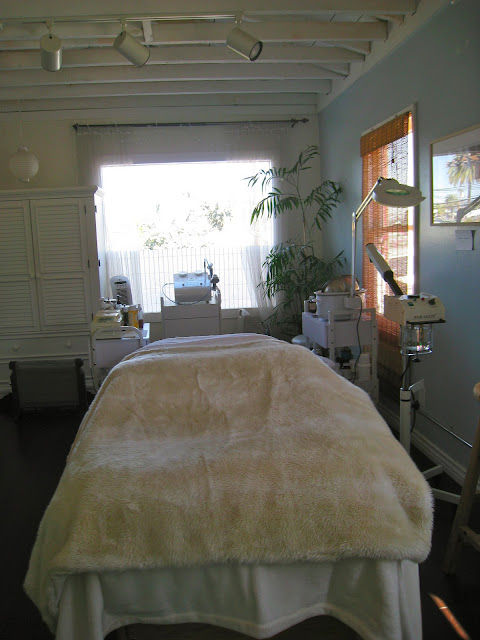 That trip out was followed by a mask that made me feel like I was devolving into an ape. As it dried, it felt like my face was turning into an ape snout. I know that sounds insane, but go get this done and tell me it doesn't. Luk told me later that as the mask dried, my face looked like a 98 year old woman. Awesome. But it sure didn't when all was said and done. My pressure points were pressed on and activated, my face was extracted and polished into a time-travel tween, pretty much, and now all I can do is gush and urge you to copy me. 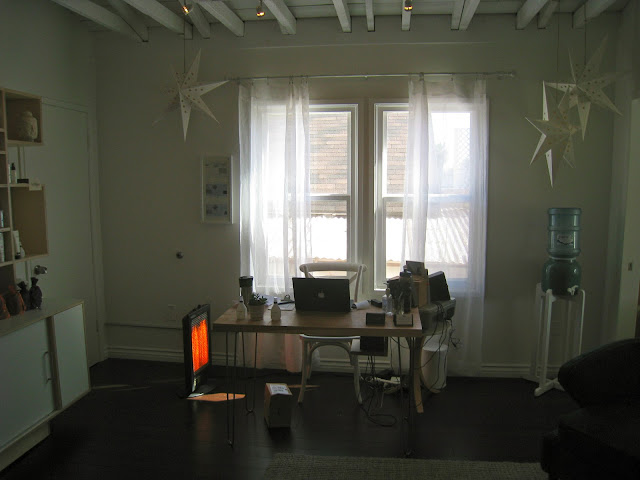 One thing that I liked so much too was that I can't recall another facial in recent memory where the esthetician didn't leave the room. They always go out and leave you under the steam and do whatever while you lay there going ho hum. Luk was with me the whole time. If steam was going on my face, she was massaging my hands, arms and head. No time was wasted, and it was all sheer Heaven. Even my tunnel trip.

After I was back to reality - kind of - Luk and I talked about how great that facial was and why, and also about Venice. "My job is to make you feel comfortable and educated about your skin." She is excellent at that job. She gave me the "Epicurean Facial" (if you do indeed want to copy me), but like she said, your skin is always changing, so while that one might be perfect for me now, in the Summer, when I'm all beached out, I'll probably need something different, as my skin will have different needs. I thought that was great too, as many times, you don't know better, so you just get the same thing you always do. Luk knew my skin better than I did, and I felt totally at ease in her more than capable, soothing hands. 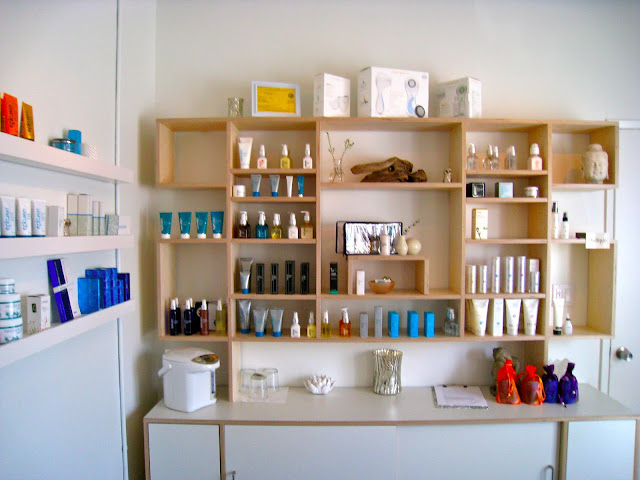 About Venice, Luk said, "I know it sounds like such a cliché, but I really like the community the most." Clichés happen for a reason, of course, and here it serves as a catchall for our people, businesses, and the neighborhood itself. "It's a proud little place."

That it is, and that it deserves to be. Especially when there are people like Jessica Luk making you feel beautiful and great, and friends waving at you on the walk home. There just aren't enough superlatives to describe how fantastic I felt, as I dreamily strolled home among the bursting out jasmine and tree blossoms falling around me on this bright, sunshiny day. Blessed is about the best I can do. 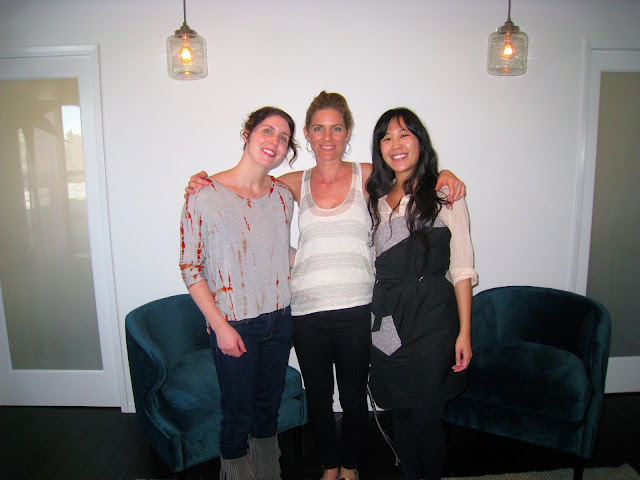 Book your own bliss (everything from waxing everything to microdermabrasion) with Jessica (or Sophia Marzocchi or Amanda Coggin  if Jessica is booked solid, as she surely should be) at www.spasophia.com or by calling them at #310.564.6676.