Yesterday was my annual baking day with my dear friend, Brigette ... and we mean business. We catch up and talk and stuff, but it's serious work too. Hard work (math ... endurance ... patience), that made the break we took to attend the Venice Canals Holiday Boat Parade even sweeter. 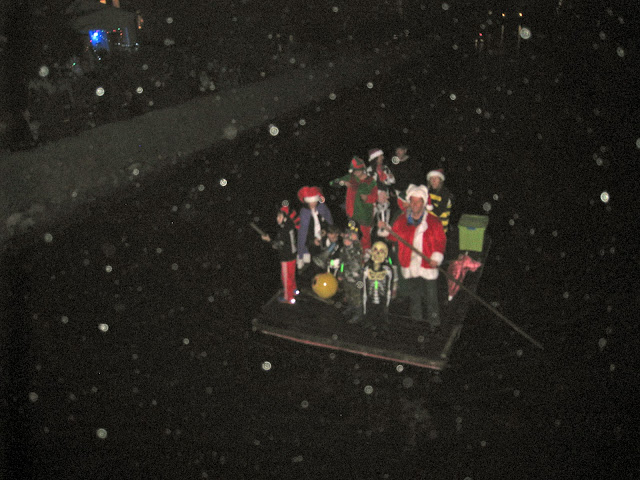 The drag was that it was raining, but rain gear and Irish coffees to go made us impervious to the elements, pretty much. If you squinted (or look at my photos), you could kind of pass the rain drops off for snow flakes. 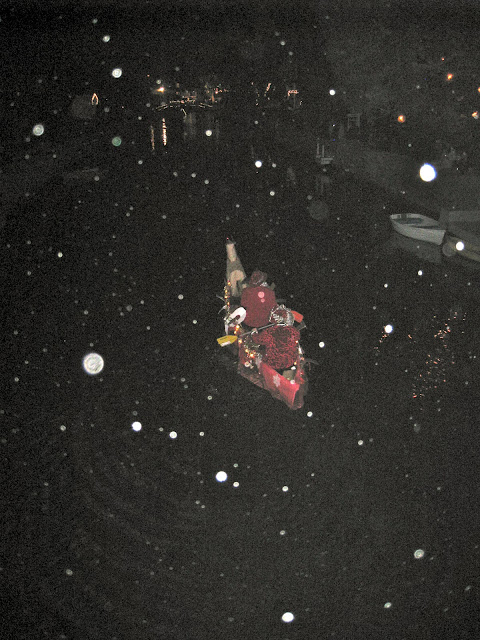 I was surprised at the good turnout in the rain, especially for L.A. people. It tapered off to more of a mist, and we tried to find the main drag of the parade, though it looked like far fewer boats/floats this year, so it was hard to be sure.

We got pulled over by the cops on our way into the canals ... for riding in the middle of the street. Yep. We got off with a warning, but it felt like a stupid waste of time. Again. Can't we just be adults having harmless fun without getting hassled? Can't we be commended for riding our bikes in the rain instead of driving and creating more havoc? Guess not. 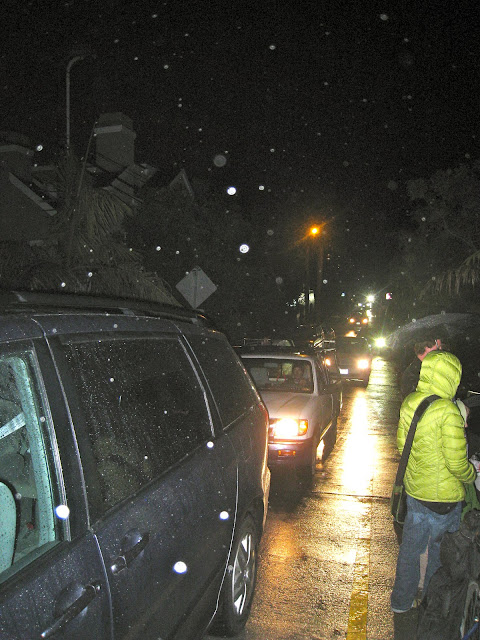 Oh, and speaking of driving and creating havoc, I think we might want to ask that cars not be allowed on the canal bridges on the night of the Holiday Parade. Because the people and bikes were maybe an inch away from the cars passing by, with tons of kids out, and it just isn't safe. My friend almost went into the drink trying to get out of the way of one vehicle, and that ain't cool. No cars on parade night. Thanks. 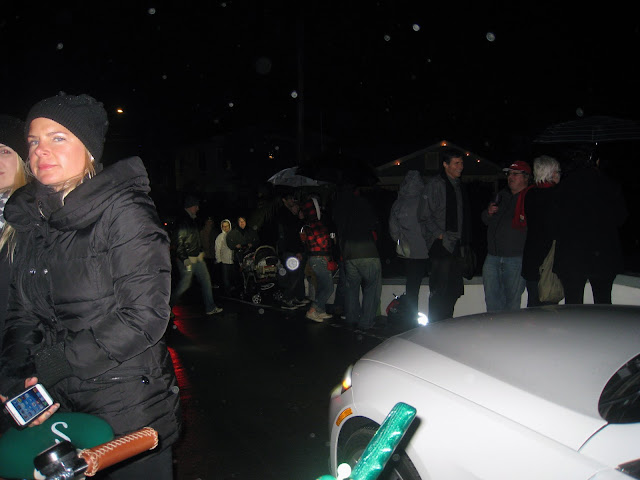 Anyway, the mood was bright, in spite of the bunk weather, and maybe even more so. You felt hard core about the fun, so the spirit of that was infectious. 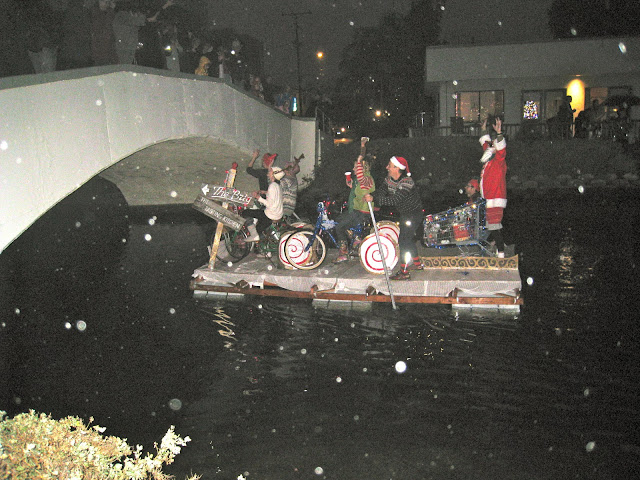 A Brig vessel sailed by, and my friend Sydney and his surfing dog, Buddha SUP'd on by with some friends, all lit up. People shouted their approval from under their umbrellas, and cared less about getting a little wet for this. 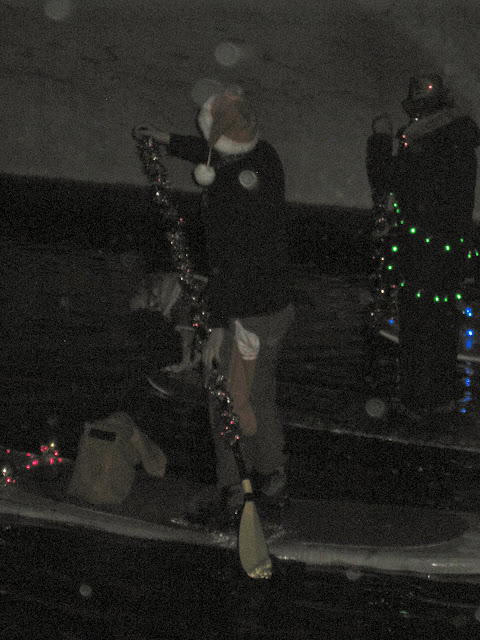 Families and friends and some guys in tuxes with a big screen featuring a photo of Barry Manilow went by, which they lowered to clear the canal bridges. Comedy. 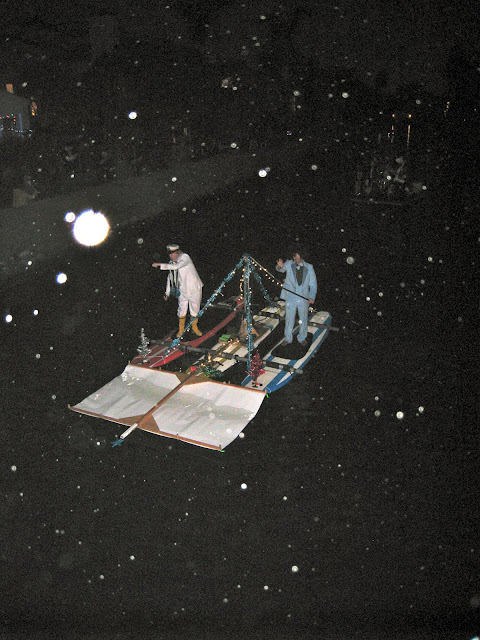 It looked magical out, as the mist dissipated and the skies cleared to reveal a perfect crescent moon lightening everything up even further. The lights on the bridges reflected their colors off of the canal water, and it was about as lovely as you can imagine. Made even lovelier when some teenage girls walked around arm-in-arm singing Christmas carols, without affectation or jokiness, simply sweetly. Magical again. 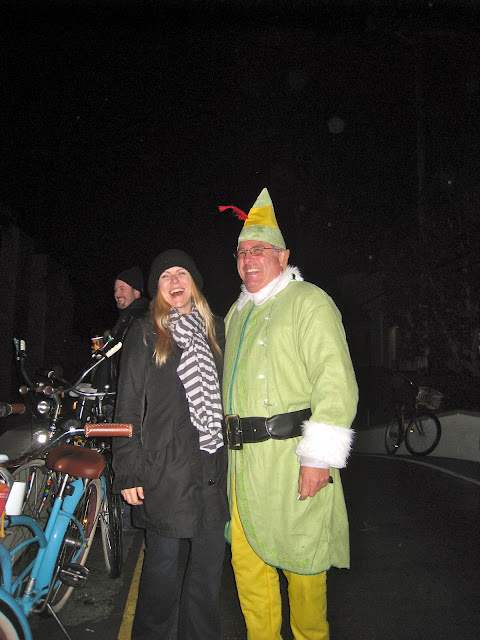 As we were oohing and aahing and laughing and carousing, a lit-up (inside and out) and mystical Elf man came walking by, full of jokes and probably a lot of nog. He insisted on having his picture taken with each of us, and then sauntered off - growling like the Cowardly Lion at us -  to make other peoples' night. That's when you just go, "I love you, Venice." 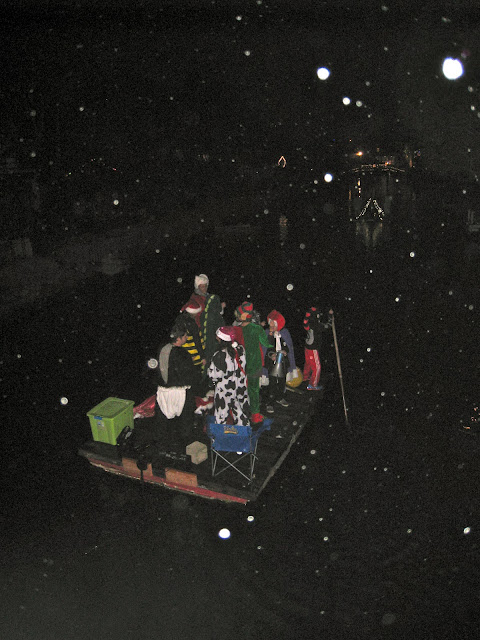 And so I do. For evenings and events exactly such as this. Keeping it special. Filling you with that spirit of community and fun.

But there was still baking to be done ... so we dinged our bells to each other, and the bikes (very legally and safely) carried us off in our separate ways, cold, but hearts completely warm. 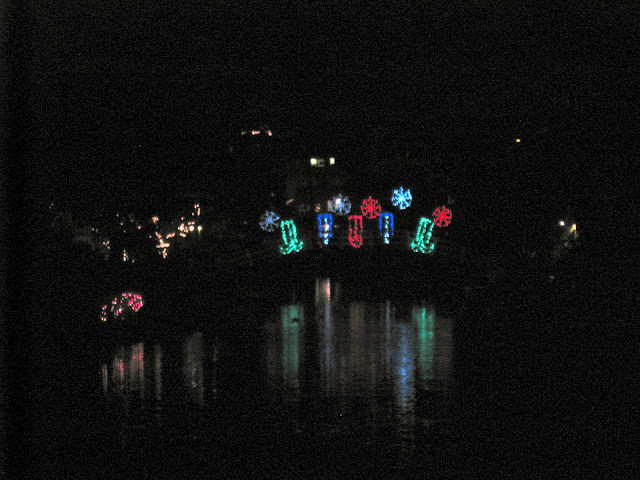