I didn't get to go home for the holidays this year, for a bunch of reasons I won't bore you with, but I wasn't that thrilled about not being in the snow with my family and loved ones back in Minnesota. It just doesn't feel that much like Christmas in California, if you come from the Great White North, you know? 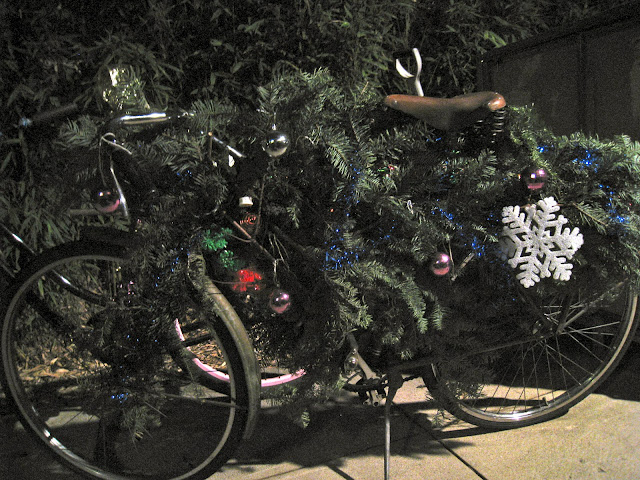 But then I accepted invitations that I haven't been able to in past years as I'm never here in Venice at the holidays ... and then it started to feel a LOT like Christmas.

The fun started with a party at Councilman Bill Rosendahl's home that he shares with Swami X, Venice's favorite guru. Swami really wanted to live to see December 21, 2012 and its dawn of a "new day of consciousness," and he made it, so they threw a party for all of Venice, it seemed. The driveway was lined with LAPD, prompting me to ask if they were the Carolers. They were not.  It turned out they were there because so was Mayor Villaraigosa, who was happy to sit on the floor at Bill and Swami's feet, listening to them both speechify. Swami did so during the moment of silence for the Newtown, Connecticut shooting victims, but it gave him the floor to be heard. Highlights from Swami: "You're not a body, you're a soul."  "There is no Hell, just different levels of Heaven." And the most important, "Love is the essence of the Universe." Amen to all that, and Cheers to Bill and Swami (and to the world not ending this day)! 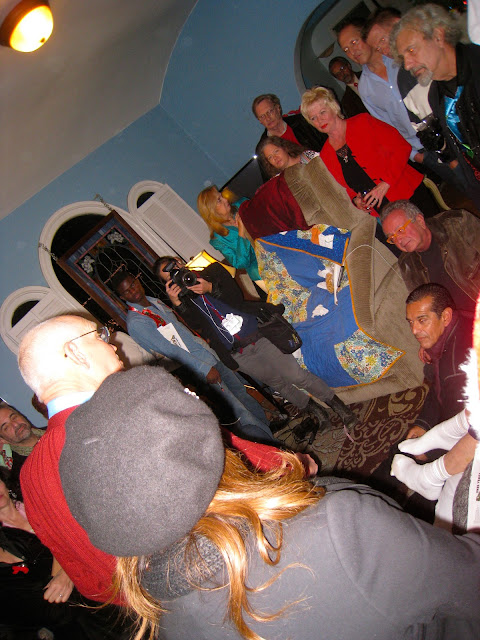 Then it was on to the Ugly Sweater Party at Canal Club, where owner Danny Samakow turned us on to Candycane Martinis - and made me wear one of his loaner ugly sweaters. Fa la la! 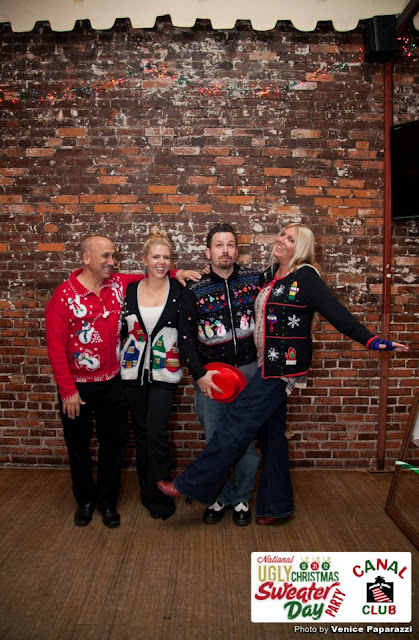 Christmas Eve was a night of pure loveliness at the Ellis yard, where it was just warm enough to eat our feast outside under the stars and ornaments hanging from the tree. 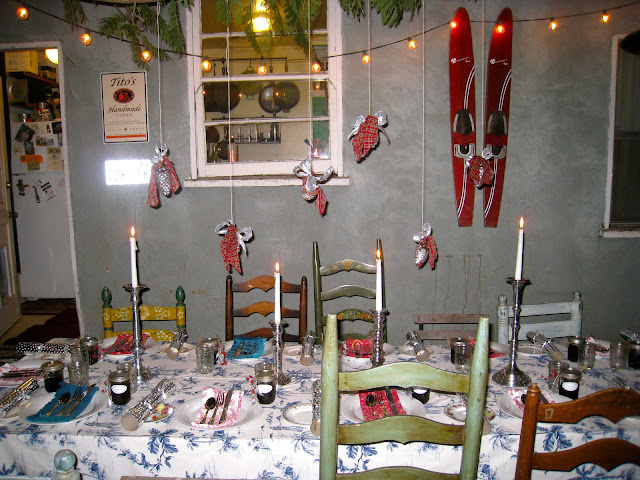 And a feast it was! 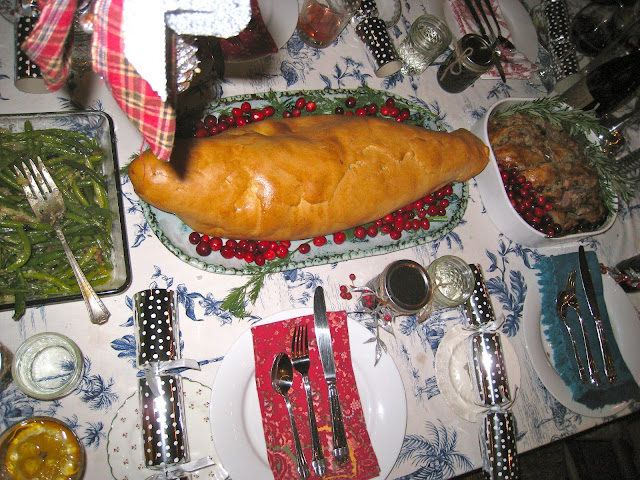 Everyone chipped in to weigh the table down with too much goodness, but the piece de resistance was the seabass baked in a bread/salt crust, executed by Miss Vavine. I mean, Wow. 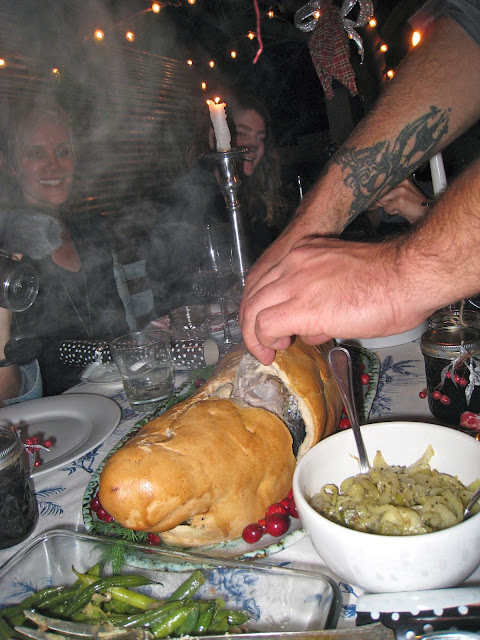 Tales were told around the fire, where it felt old fashioned as we sipped Matt's Old Fashioneds. 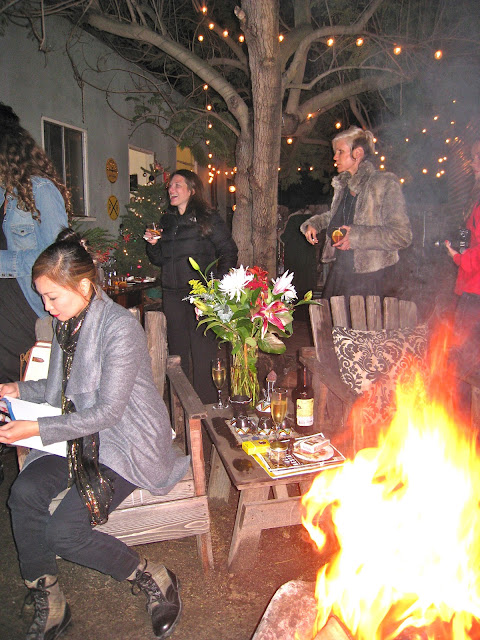 There were brand new friends this year, two pigs called Georgia and Paloma. They join the Penmar neighborhood chickens in what is turning into a true urban farm. Coolness. 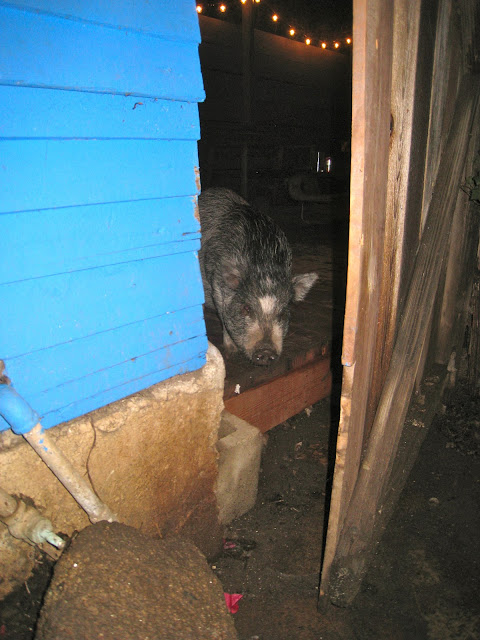 We ate and drank and ate some more, all wearing our silver crowns that came in the crackers at each place setting. 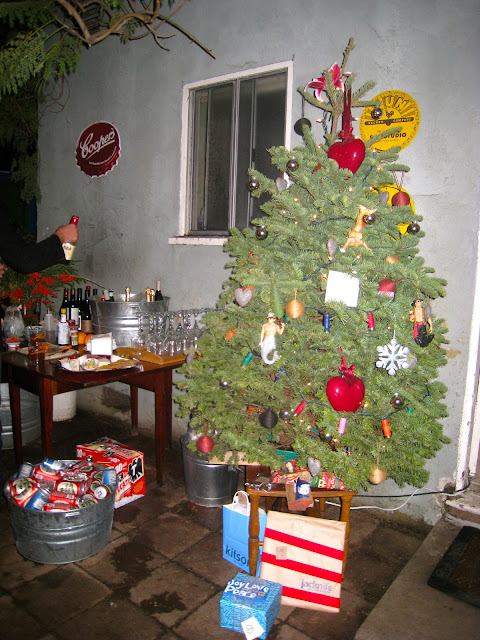 We called our families, and maybe did feel a little homesick, but as I looked around at my fun, smart, thoughtful, talented, sweet and dear friends, I really did feel home, and really did feel that I was with family. None of that feeling is about geography, and really IS about love - the essence of the Universe after all. 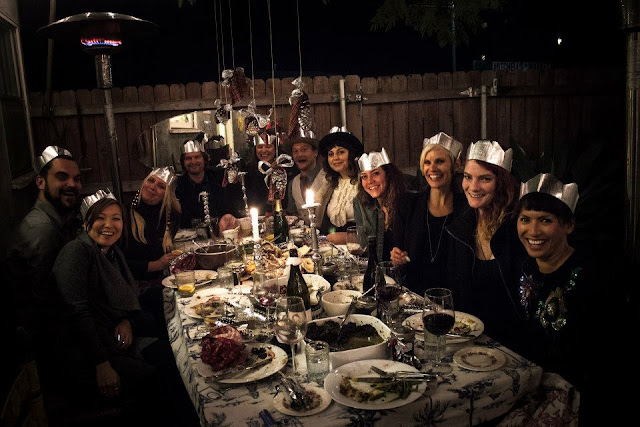 Merry Venice Christmas, and so many thanks to everyone who shared it with me! It was truly beautiful, with snow or not.

** Group dinner photo by Miss Emma Leslie
Posted by CJ Gronner at 11:30 AM