Tom Morello Tears Up The Troubadour

The Nightwatchman was back on duty at The Troubadour in Los Angeles last night, and the sold out show was packed with the Tom Morello faithful. It had been a year since his last show in this storied venue, and a LOT has gone down in the world since, and Morello always has something profound to say about it all. 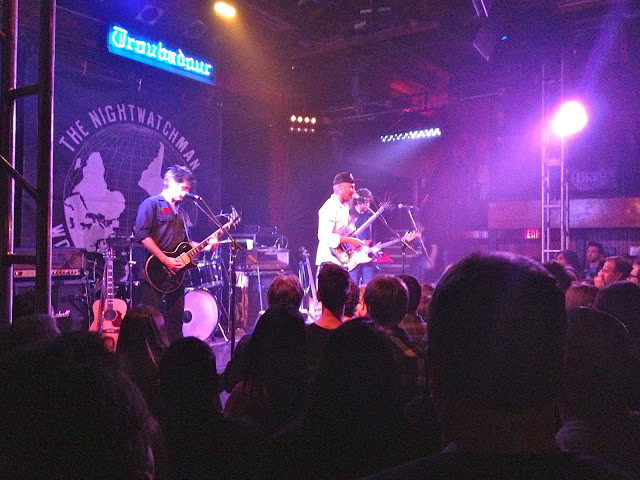 I love the Nightwatchman shows for many reasons, but a big one is that I always get to see our gang of mutual friends and catch up on the latest. This is the best, but last night I regret to say that it did prevent me from catching Tom's opening act, David Rovics. Tom's friend and an outspoken singer for social justice, Rovics was reported to be real good, with a bit of a "busker" vibe to him, according to one friend. I will get there next time, and apologize to Mr. Rovics that I wasn't inside in time to catch any of his tunes. Dang. 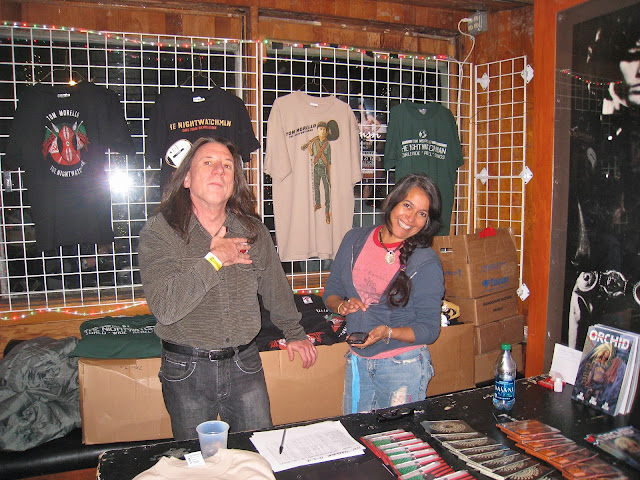 People were stuffed in to the rafters, and when the lights went down and the dramatic intro music came up, the place went wild before a note was played.  Morello took the stage, and "Good evening, Los Angeles! I'm the Nightwatchman, and this is 'Maximum Firepower'!" With that, Morello tore right into his great song that features the truism If you take a step towards freedom, it will take two steps towards you. Right on.

The Freedom Fighter Orchestra (Dave Gibbs, Carl Restivo, Eric Gardner, and a new guy on keys that Tom called "The Bull Shark") joined Morello on stage for a heavy version of "It Begins Tonight" which blew right into the classic from Tom's first solo album, "One Man Revolution". At the end of that one, Morello yelled, "Fuck YEAH!" - taking the words out of everyone's mouths. 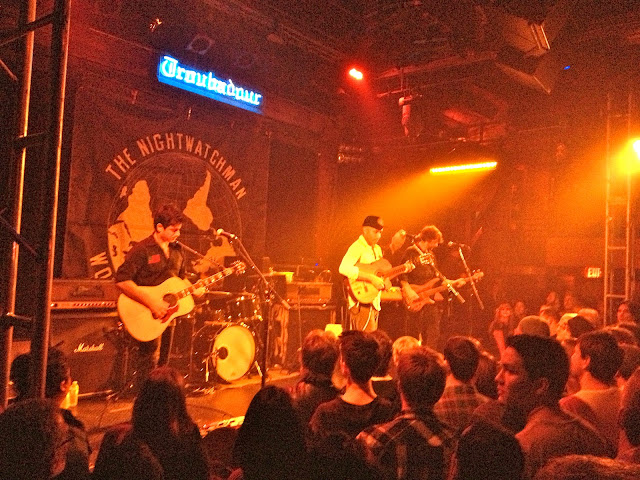 "The first time I experienced reciprocal romantic love, I was 17 and she had 6 strings and a fret board," said Tom to introduce "Black Spartacus Heart Attack Machine", which he played on the guitar of the same name. I ain't alone no more... he sang to his People, and the shouts back affirmed that very fact.

That's a great thing about these guys and these songs ... they are for the People, and they do let you know that none of us are alone in it. The Nightwatchman shows up for all sorts of protests and benefits and causes, and is out there sticking up for justice every chance he gets. Through all these endeavors, friendships are made, and a veritable "Fox News Enemy List" was in the house last night. Union Members (which Morello is, and proudly), the successful Long Beach Longshoreman strikers, Walmart strikers, Anti-war activists, Occupy Wall Street founders, and everyday people trying to get by and do the right things ... all of us were rocking it out together last night ... and no one was alone.
That was a perfect time for "Union Town", which Los Angeles surely is. Morello ended that one by shouting the Lennon line, "A Working Class Hero is something to be!" It sure is. 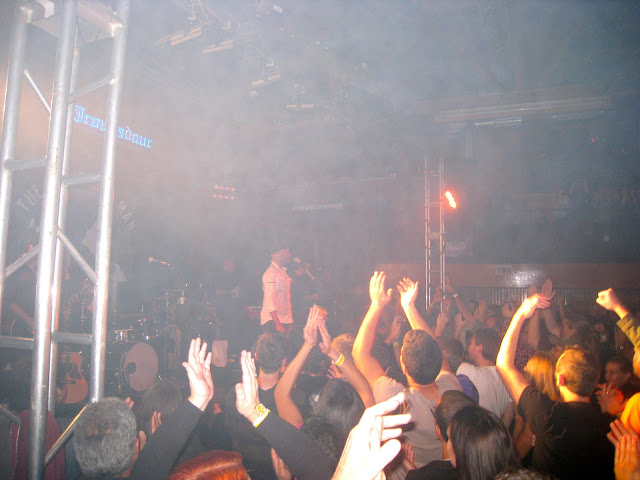 Tom and his good friend and comrade, Ben Harper, "set out to write a song that would change the world", so Tom went to Ben's house, where they decided that "to save others, you have to save yourself" and came up with the beautiful and true, "Save The Hammer For The Man." Carl Restivo took over the Ben verses this night (to wild applause), and Tom played a gorgeous solo on his "Whatever It Takes" acoustic guitar. So good. Then came the equally intense and deep, "The Fifth Horseman of The Apocalypse", which I love, and clearly so did everyone else. There was a tangible feeling of deep respect all night, both from the audience for the band, and they for them. These are intensely special shows, and that's just a fact.

"Whatever It Takes" had a superfan guy near me not only singing along with every word, but doing little gestures to illustrate the words too. I love those people, with their unadulterated enthusiasm for what they love. They MEAN it. Probably because they're watching a show from a guy who REALLY means it, a lot more than most. 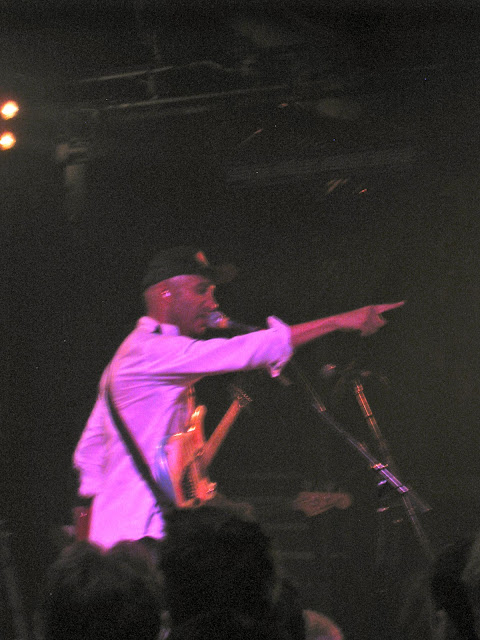 Like when he told about working with the IVAW (Iraq Vets Against The War) and becoming friends with Tomas Young, the subject of the great documentary Body Of War. We visited the Walter Reed Hospital on Morello's Justice Tour of 2008, and Tom, Tomas and I went in the hospital rooms and talked with these injured (mangled, really) vets, and it was one of the most intense experiences of my life. Young has been having some setbacks with blood clots of late, and Tom dedicated his song, "Stray Bullets" to him and the IVAW members in the audience. Why the fuck we're even here, I'll never know ... a good question to ask of ALL war.

Amnesty International released a big Bob Dylan cover album (Chimes Of Freedom) and Tom next played his contribution to that behemoth of tributes, "Blind Willie McTell", which was great as you would expect. It featured a dope electric solo and a full band metallic rock out at the end. From there, "You get acoustic, you get electric, you get 50 shades of The Nightwatchman tonight!" Totally right, as after that heaviness, Tom asked for total silence, "Or I'll send my 89 year old Mom out there, and you don't want that". That shut everyone up - totally - and Tom played his sublime, "Garden Of Gethsemane", his Mom's favorite. It was SO quiet you really could hear people breathing, and every intricate acoustic note and word was not just heard, but RECEIVED. The eruption of grateful noise at its end was a total jolt after the silence, and set the tone for the next one. 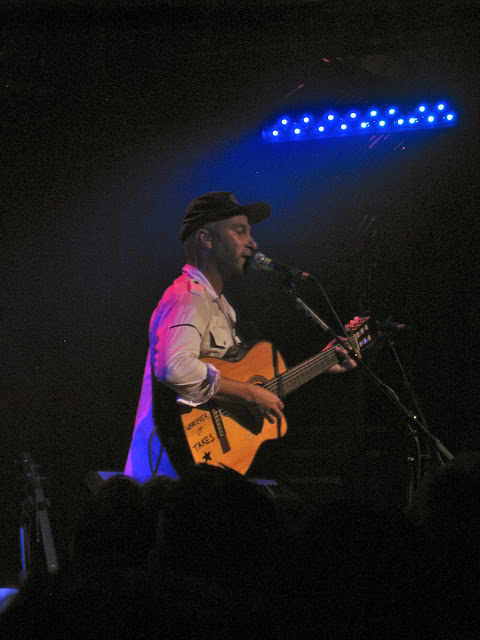 "From the pitch and the squeals, I can tell we have our first female audience members tonight!" joked Tom, and then they played "The one we wrote for the ladies", the party song, "Shake My Shit". Tom was dancing like I've never seen him cut a rug before, and then blew the minds with a guitar solo played with his teeth. When the room went wild, he shouted, "Consider your shit shook!" Yep. It was. 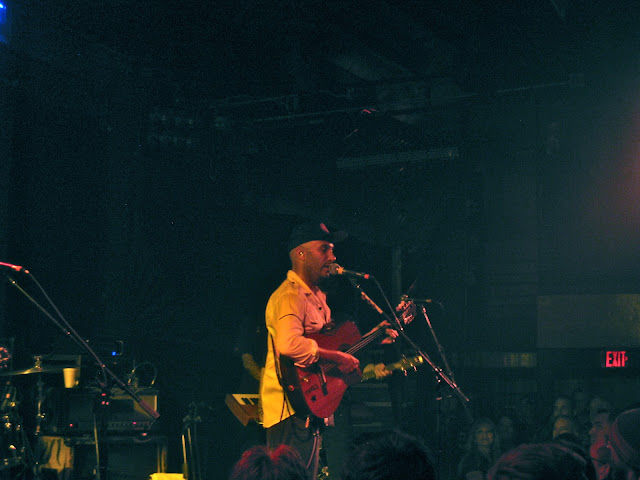 Rage Against The Machine - Tom's other band- is having their 20 year anniversary, so Tom shared a story about when they were "The original Occupy Wall Street" and they shot the "Sleep Now In The Fire" video on the steps of the New York Stock Exchange, directed by Michael Moore. This wound up being Moore's first time being arrested, as he had given them the one main directive, "Whatever happens, don't stop playing!" So they didn't. When Tom just played the little opening riff from that song, the room went crazy, causing Tom to say, "It's funny how just that does that", referring to the cause and effect of that epic jam. 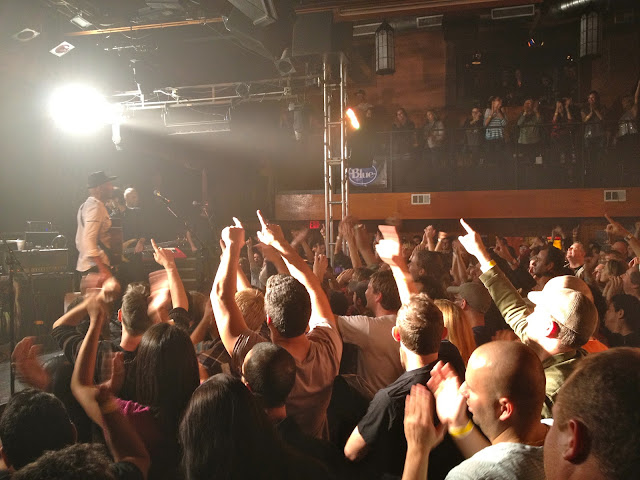 But they didn't play that one, and instead went into "The Road I Must Travel", which the whole place sang along with the "Na na na na" chorus, which wrapped up with a Rage-y stomp that had the whole place banging heads as one. "All together in solidarity!" The point of the whole night, and the whole of the music, really.

"Would you like one more song?" WOOOOOO! "The People united, will never be defeated!" smiled Tom and gave us the song that he joined The Boss on the night before in Anaheim, "The Ghost Of Tom Joad". I get chills every time I hear this one, and it's because Tom completely made it his own. The solo on this one is just so mind blowing, and the melody so deep, that I still get choked up over it. I hope every person with ears gets to hear it in their lifetime, and hopefully live, and there's just nothing like it. A guy next to me simply shouted, "WHAT?!?!" Nonplussed and thrilled. As were we all. (The picture below isn't blurry, that was the speed of the solo!) 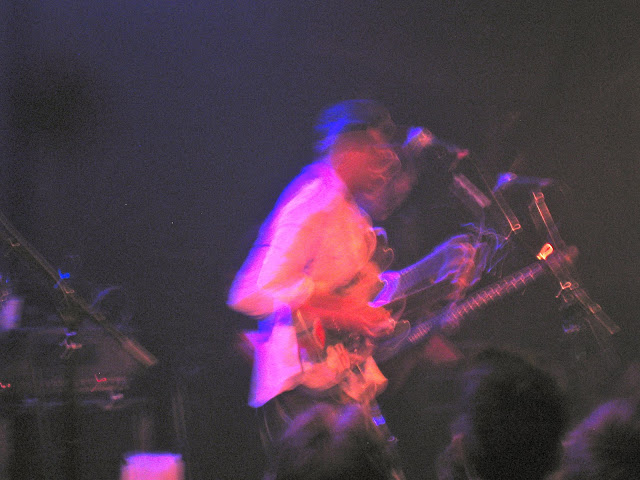 "Convince me you'd like to hear one more song!" Everyone did, so they got the Woody Guthrie now Nightwatchman anthem, "This Land Is Your Land", which Tom wants played in a post-revolutionary world, "When they paint the White House black ...". All ages (from 7 to 89!), from the bartenders to the balconies,  EVERYONE sang and jumped along, like never before. "We're all in this together!" It was pure jubilance. 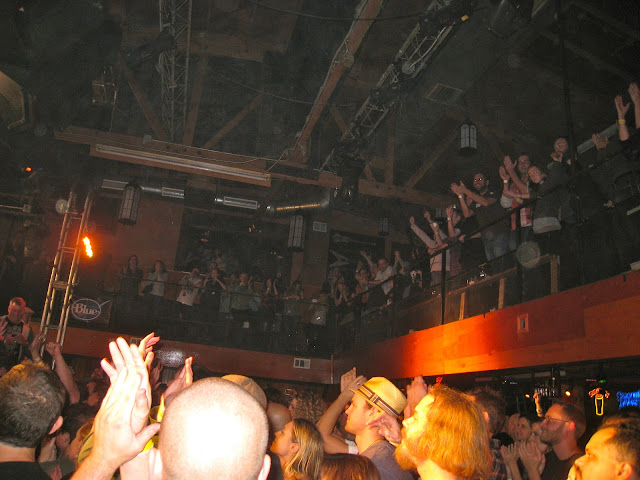 "Curfew be damned, we're going for 3 hours and 25 minutes!" joked Tom, with another Bruce reference. He invited the entire Troubadour on stage for "World Wide Rebel Songs", and they pretty much all took him up on the offer. It was chaotic and fun and a lifetime memory for many of the ecstatic faces beaming out from the stage. This song, which asks the crucial question, Are you gonna stand around, or are you gonna be free?! came about when Tom played a benefit for Korean guitar makers on strike, who then donated all of the money earned to the earthquake victims in Haiti - again proving the power of the human spirit, and that we truly are all in this thing together. 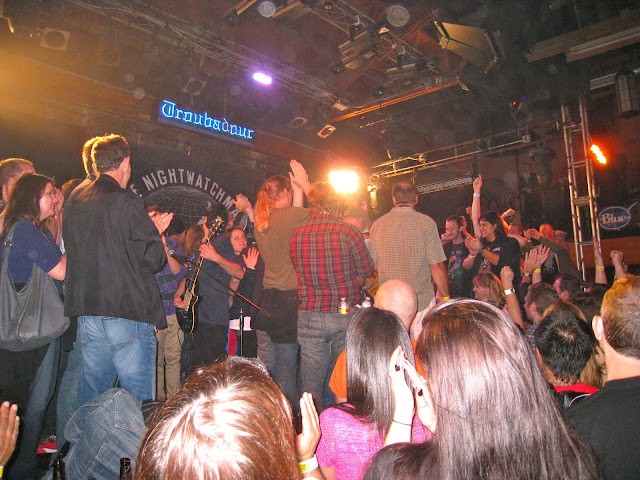 Chants of "ONE MORE!!" grew, and Tom said, "I got nowhere to be 'til my kids get up at 4 am", so we went back to "the romantic lighting, for a nice hippie vibe". The people on stage all sat down right there, and Tom played my favorite Nightwatchman song, "Let Freedom Ring". Total quiet, total beauty of a moment, just watching the rapt faces on the true fans gathered around Tom's feet. The words still, and always, ring true ... Let. Freedom. Ring. Not a lot else has to be said. 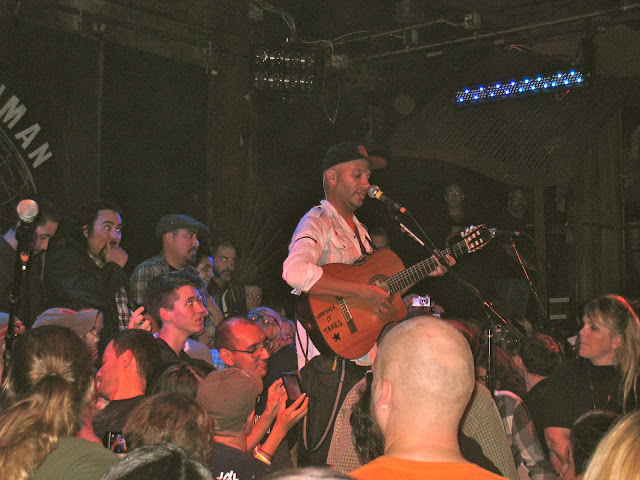 With the now-trademark farewell, "Take it easy, but take it!" Morello and The Freedom Fighter Orchestra left the stage, weaving their way through the throngs around them, and that was that. 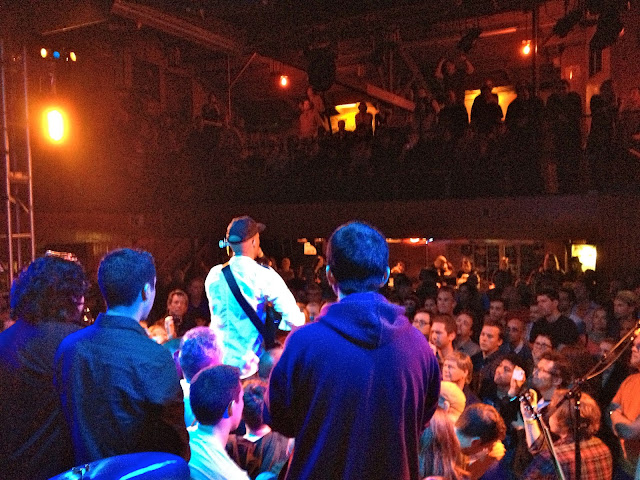 *Photos by me and Brooklyn Joe Vitale