Sunday was Holiday Family Fun day here in Venice, and for us, that meant SNOW! The day was sunny, bright and warm, which made the whole deal more surreal ... which is perfect for Abbot Kinney, especially these days. 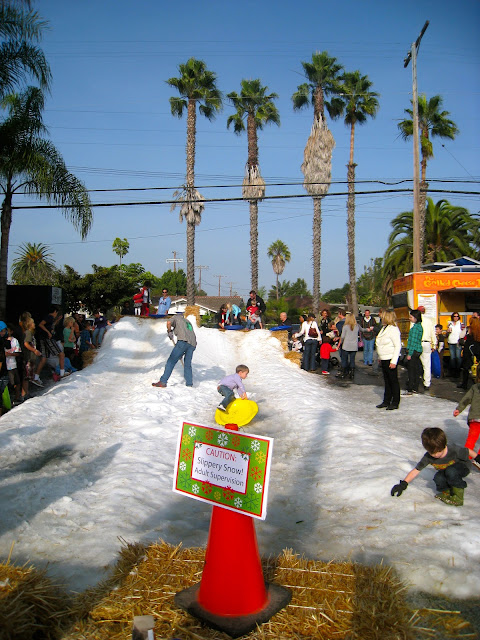 I had just spoken to some friends back home in Minnesota, where they were experiencing an actual blizzard, like Snow Day style, so they might all get a kick out of seeing this little snow hill story today. Don't scoff though, folks, some of these little guys in Venice had never even fathomed what snow IS, so this was a big deal. 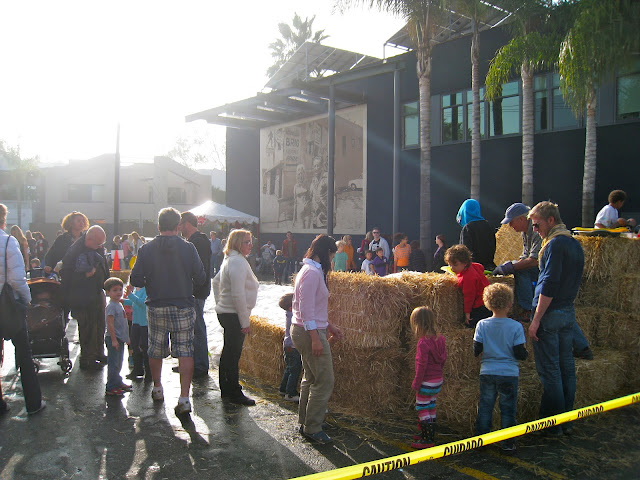 Proven by the lines to ride a sled down the mini snow/hay hill in The Brig parking lot. Looong lines. Barely patient kids and their camera-toting parents stood in line to wait their turn, talking with neighbors and friends to pass the time. 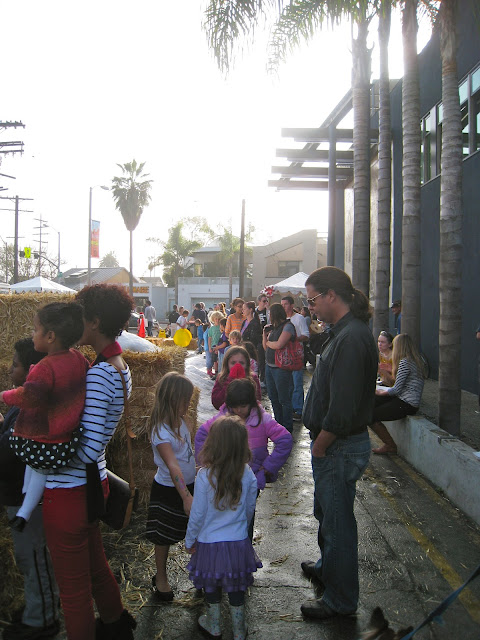 The smiles on the little faces zipping down the tiny glacier clearly made it worth it. 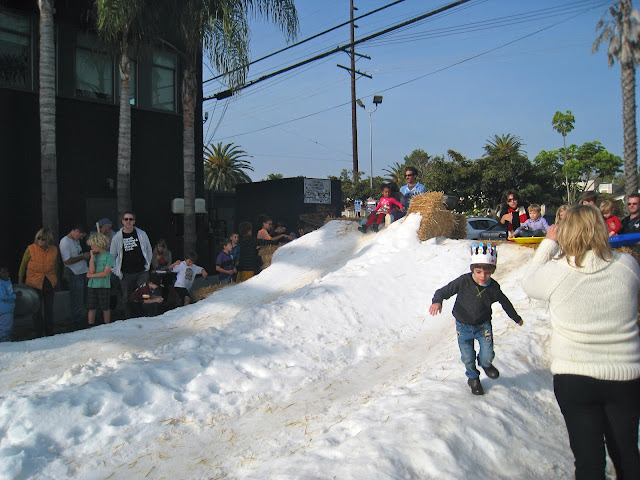 Some even got up enough speed to smack into the hay bales at the bottom. Skills. 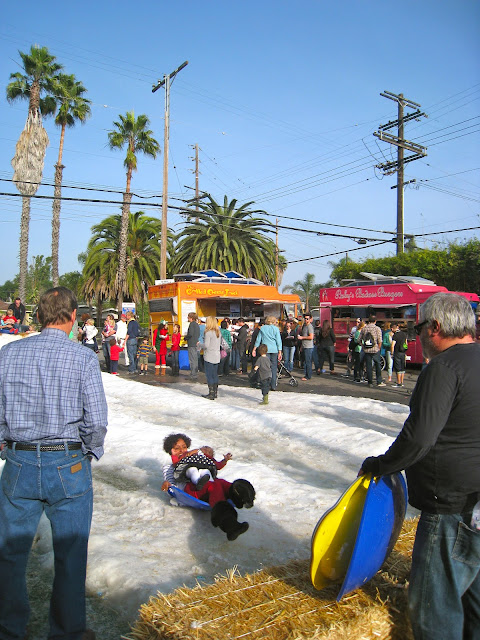 If sledding wasn't enough entertainment for you, there was a booth where you could get faces painted, do little crafts, or stand in another line at one of the seemingly ever-present food trucks in The Brig's lot. (Or not). 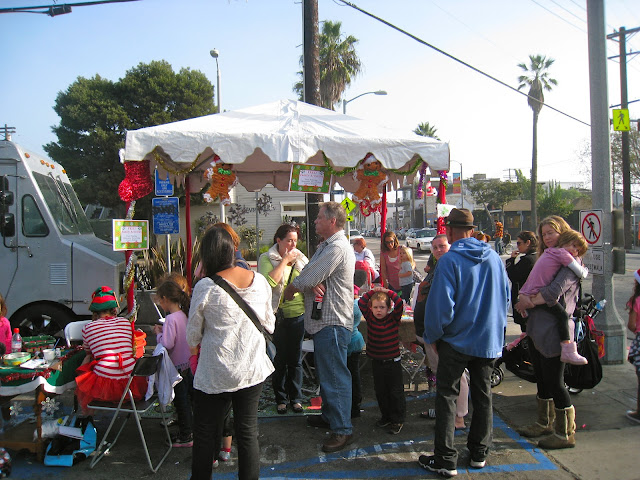 As the sun climbed higher up in the day, the parking lot got a lot more wet. Shorts made more sense than snow pants ... unless you were sliding in the soggy snow. No one cared, this was strictly about FUN. 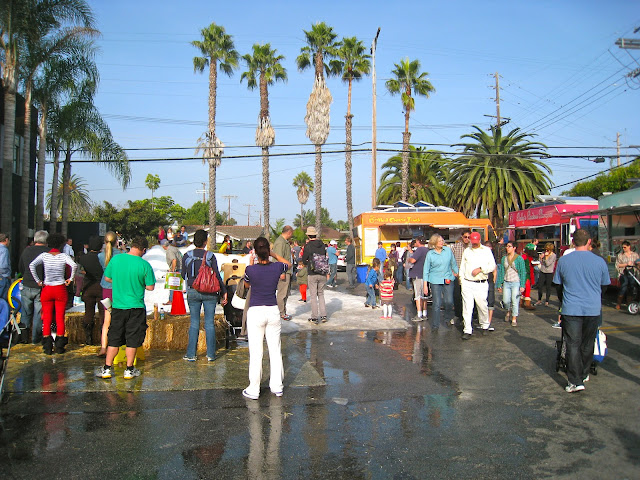 Well, fun and Santa! He was on a break when I was there (needing to save his energy for Christmas Eve, I suppose), but I heard he was pretty legit looking, and plenty of kids got to tell him what they wanted, and get those all-important lap photos taken, willingly or not. 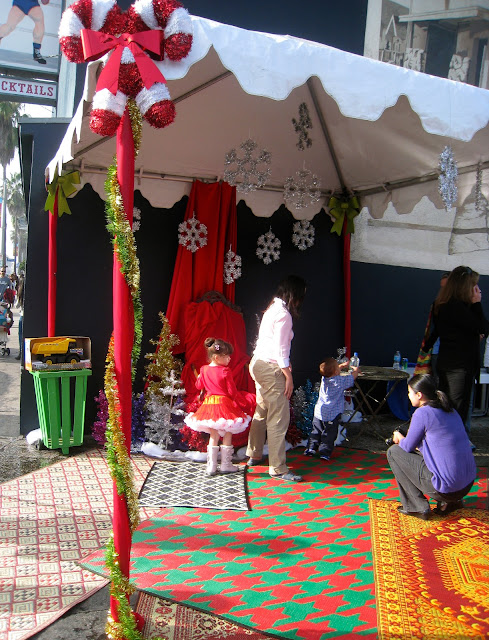 Strolling down the boulevard, we came upon the dears that are the Off Their Jingle Bell Rockers, singing their Venice holiday classic, "It's Christmas On Abbot Kinney". They were the holiday spirit itself, and we swayed and smiled, and thanked goodness for them. 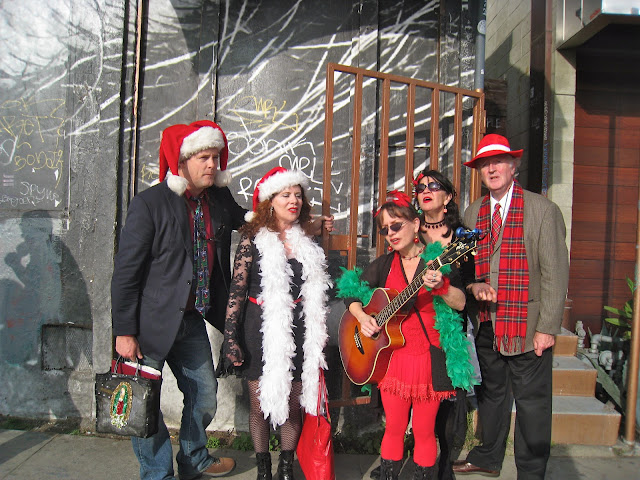 Especially when they dashed out into the crosswalk, stopping traffic, twirling and singing in the street. That was my favorite moment of the day - seeing the people in their cars, wondering what craziness goes down here in this wacky Venice ... Exactly what we love about it. Exactly what we need so much more of right where they were. We left the Rockers as they stormed The Roosterfish to bring some cheer to the daytime revelers inside. I was tempted to join them, but had all day wanted to see the water, the sunshine, and the grand performance of The Boardwalk. 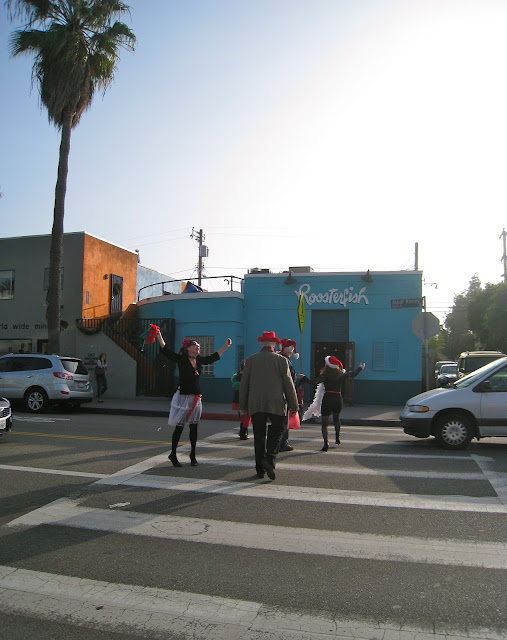 After running into so many great people down there, eating great food at The Fig Tree, catching up with friends, epically ranting, and soaking up all the real Venice one could possibly hope for in an afternoon, the joy of the day was punctuated with a wintery, pastel sunset and the communal hymn that is the Drum Circle. Exaltation. 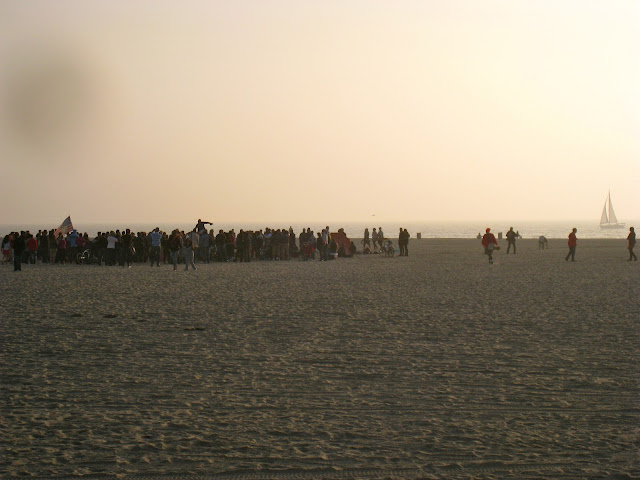 Pure joy and release echoed into the sky, and was juxtaposed against the total serenity of a sailboat gliding by on the calmest of days. I just stopped in my tracks, breathed in deeply, and felt so happy to be right exactly where I was ...

A festive - and profound - Holiday Sunday in Venice.
Posted by CJ Gronner at 3:30 PM