It's been a marvelous, glistening winter so far in Venice, hasn't it? There is no better place to realize this fact than at the beach each morning. We exchange smiles and waves with the regular people every day, all of feeling extra blessed/blissed, seen clearly on our faces.

Yesterday's glorious stroll was interrupted by total mayhem. The tractor sand mover things were out rumbling the ground beneath our feet, super noisy. This is a harbinger of spring, however, as they were plowing down the giant sand berms that protect the homes in winter. So bad/good.

Then the most gigantic yacht I've ever seen was parked out a little beyond the Venice Pier, belching smoke out its stacks and demanding to be gawked at. Obnoxious. (It's still there). 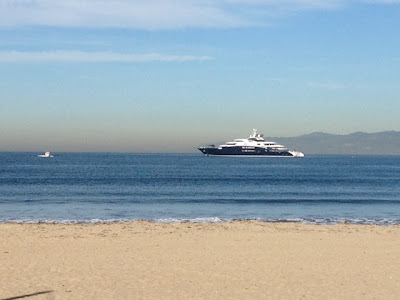 Heading back north, we were just about to cross under the Venice Pier when a LAPD chopper began flying low out toward the yacht. Were they terrorists? Were they drug kingpins? What was going on?!

Then cop cars began FLYING down the Venice pier, scattering pedestrians and fishermen as they sped past. I've never ever seen this before, and it was kind of alarming. Cops spilled out of their cars at the end of the pier, and we watched from the sand as a body jumped into the water. It was like watching the movie Falling Down. 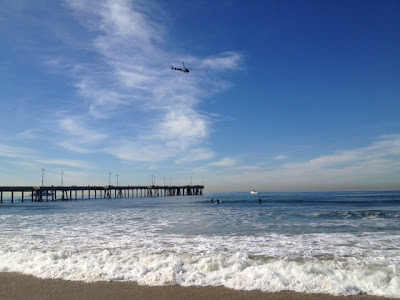 The cops and the people lining the pier all stared down into the water as LAPD and Lifeguard boats sped to the scene, Firetrucks wailed their arrival, and stand up paddle boarders rowed up to get a better look. Through it all, the surfers kept surfing.

We began to get that the big yacht had nothing to do with the scene, and that someone was busted or fell. Whatever the case, as usual, it seemed that there were too many resources being wasted on one incident. Especially when I found out later via Yo Venice (we had to get a move on in our day) that it was all for an 80 year old man, in what seemed to be a suicide attempt. Sad. Both that he wanted to end it all, but also that such a huge scene was made over it, when it would appear to be a very private choice. If you had seen the speed that the cop cars raced down the pier with, you could only be happy that no one else was hurt, as the pier is not very wide at all. Super macho, LAPD. We're impressed. (The body I saw drop in was a tourist that jumped in to help rescue the guy. One guy seemed able to handle it all. One.)

I hope the elderly gentleman is ok, that his people have shown up to love him, and that he can find peace and privacy. I also hope we can all cool it with the overreaction to stuff these days, and save the drama for the big stuff.

*Pics by Jennifer Everhart
Posted by CJ Gronner at 4:26 PM