I'm not sure what's in retrograde or rising or whatnot, but it seems like there have been a LOT of major peAKS!!!!! and mega VALleys...., back to back, for myself - and most everyone I've talked to lately. This morning's blustery walk on the beach (we laughed it was like free micro-dermabrasion) was a good real-life analogy of whatever's going on.

It was SO beautiful out after yesterday's rain, just crisp and blue and diamonds on the soles of our bare feet, both sand and water. We sat down on the lifeguard tower for our water break and I started to complain about how it had taken me two days to get tar off my feet from the other day, with rough scrubbing. Filthy stuff. I looked down at my feet and thought I saw another tar blob, but nope, it was a bright little ladybug! Awesome.

I saw a couple ladies taking turns taking pictures of each other, so went over and offered to take one of the two of them together. You would've thought I'd offered them the rare kind of bone marrow they needed. Is doing a stranger a decent turn really that rare these days? Let's hope not.

Resuming our blowing down the beach, I saw a dead looking little fish. Jenny picked him or her up and threw 'em back in the water, with revival hopes, but more likely to sleep with other fishes. Kind of sad.

Then walking along some more, I almost stepped on a purple starfish! Right there, washed up on the sand! We've seen a lot of them lately on the jetties (amazing every time!), but not solo on the sand. It seemed to still be malleable and maybe had just been flipped out by the crazy eddies from the wind. The starfish also got tossed back in the waves, with higher hopes of recovery. And WE had higher hopes, that our eco-system is hanging in there and these creatures are there for us to see (and save!) every day. What a cool thing.

Not 50 yards later, something caught my eye in the waves. One of the big beach garbage cans had been blown out into the water and was bobbing up and down in the whitewash, like a poster for awful urban pollution. We stopped and just stared at it, feeling bummed and quiet after our high spirits two seconds earlier. 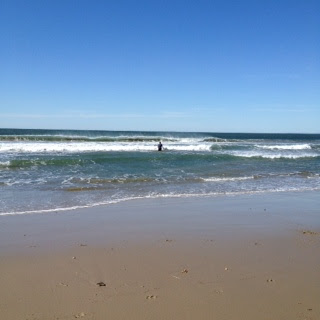 As we stood there and wondered what to do, a guy came running up and said, "Will you toss my towel up on the dry sand, I'm gonna go get that thing!" And he did. He waded out there (Far. We only got the camera out once he was coming in) and wrestled with this bigass garbage can in the shore break, and brought it in! An Eco-Hero! He should tie his towel around his shoulders like a cape! 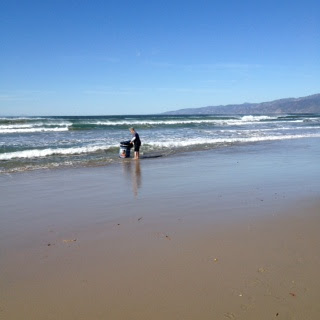 His name was Richard, and when I thanked him so much for doing that, he said, "Oh, I've been chasing barrels my whole life!" Rad. 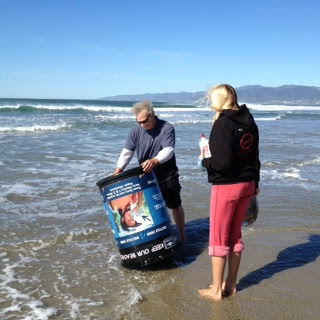 Our spirits soared again, just to know that there remains some people who do a good thing just for the sake of doing it. And it was all another in your face reminder about how we're all in this whole deal together, right down to the spineless little guys that are our sea neighbors.

I hope it all mellows out for everyone pretty soon here, but on the other hand, it's never a dull moment this way, so ... I guess just get out there and see what happens!

And try to be good.

*Photos by Jennifer Everhart.
Posted by CJ Gronner at 1:04 PM