The Battle Of Cairo - 1/2 Revolution Screens in Venice

I bumped into my friend Gallo yesterday morning at the beach, and he told me about his friend Karim's film screening at Beyond Baroque last night. 1/2 Revolution is the heavy, dramatic, REAL documentary of a group of friends as they experience the (ongoing) Revolution in Cairo - exactly one year ago. Titled HALF Revolution as it is nowhere near over. 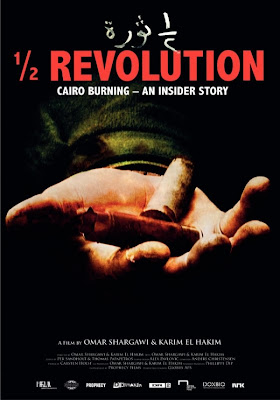 The film just screened at Sundance, and is especially timely because 75 people were just killed at a soccer match in Egypt by government thugs the other day, and Tahrir Square is on the front page of today's paper again, full of fury, pride and resistance. The people of Egypt MEAN it.

I was happy to see the screening room at Beyond Baroque packed at 10 pm on a Thursday, full of interested, caring Venetians and friends. Egyptian born Karim El Hakim lived in Venice for years, until 9/11 happened and he no longer wanted to participate in the politics and economy of the U.S. He moved back to his homeland, and has been right in the thick of the uprising in Cairo. So much so that he filmed much of it right outside the window of his home.

It's all about basic human rights. Which is exactly why it's so universally compelling, and why the spirit of the whole thing is catching on - everywhere. The People of Egypt were FED UP with the 30 year Mubarak regime, and took to the streets. Watching it all on the news, it's difficult to grasp how very BIG it all was/is. When you see it up close, through the lens of a regular guy that many in the room hold dear as a friend, it is entirely something else. You feel the fear, the panic, the righteous anger, but most of all, you feel the absolute determination of a people that are ready not just to protest, but to die for a better way of life. As one guy says, "If I die, I die with a smile."

"Everyone is on the streets - EVERYONE!", yells Karim into the phone to his friend. You feel the terror when friends lose each other in the melee, and the joy when Karim is reunited safely with his wife on the street. Super moving (His wife called during the Q&A following the film and the entire audience applauded her via speaker phone). You feel the fury and pride when a fellow citizen is killed by their own government, and someone writes "Egyptian" in their blood left on the street. 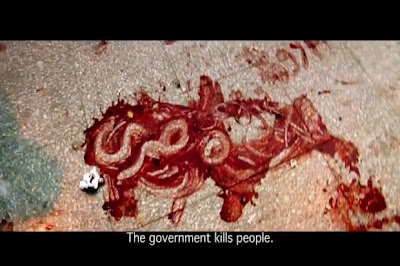 This is especially outrageous as the entire time the people protesting are yelling, "NO VIOLENCE!" What must happen in the minds of authorities/leaders to make the slaughter of people they are meant to protect permissible by their hands? A deep sickness, no question.

El Hakim and his director, Omar Shargawi, take you right into the dead center of the thrill and fright of the packed Tahrir Square, and back into their homes as they deal with the reality of those intense days. El Hakim is leaving tonight to return home to Cairo, and will be back on the streets with his people tomorrow. "Nothing has really changed, Egypt is a mess," said El Hakim in the Q&A. "This is not Occupy Wall Street, people are dying in the street." Gerry Fialka asked him why he lives in Cairo now, and El Hakim responded, "I feel like I live in the future there ... as the U.S. and others follow our example." But he cautioned, "If you're gonna move, be ready." You can just watch this film and know exactly what he means.

And I hope you will. 1/2 Revolution is doing the festival circuit now, but keep your eyes open for screenings anywhere you can via their website. It is a MUST see documentary for oppressed citizens of the world everywhere.