Well, it's a pretty good week when you see Jane's Addiction twice in it! I went to their stellar show at the John Anson Ford on Monday night, and then got hooked up by my good pal, Brad, to see them again at The Jimmy Kimmel Show, where he works. My friend, Steph, and Brad's wife, Maryjane, both love Jane's and had never seen them live, so this was going to be FUN. 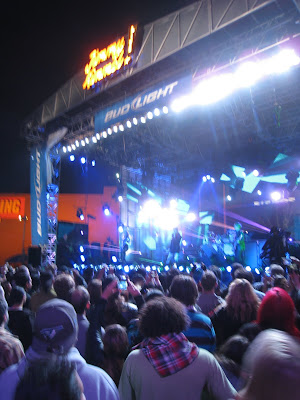 After some time in the fun - and packed - Kimmel green room party zone, we trooped outside to the outdoor stage behind the studio on Hollywood Boulevard. A loud guy riles up the crowd a bit in a pretty obnoxious fashion, then Jimmy Kimmel comes out to introduce the band. The crowd was all ages, and ALL into it. If you saw the show on t.v., the enthusiasm was genuine, I assure you. 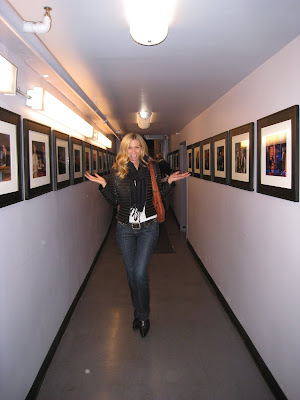 It's usually a short set when a band plays Kimmel, and they only air one song, but the crowd was happy to hear anything by Jane's. The guys in the band got deafening screams just for walking on stage. The "On Air" signal went down, Jimmy K. intro'd the song, and we got to hear the new "Irresistible Force" from their new album (coming out next week, the 18th!), The Great Escape Artist. I love it. It's classic sounding the first time you hear it. 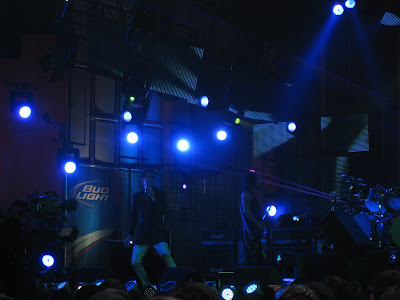 Then right into "Stop", which featured a ton of confetti falling all over, and Etty Farrell and her dancing twin (Stephanie?) in sparkling outfits, vamping hotly all over the stage. Speaking of the stage, Perry was not happy with it and threatened to sue Kimmel if he broke his foot. Seemed a little dangerous. 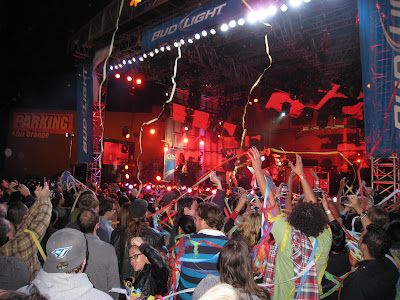 "Just Because" was great as ever, and included an eyeball searing Navarro solo, and Stephen Perkins grinning - as ever - as he banged the drums.

Chris Chaney as the new bass player, more than holds his own with these longtime band mates, seamlessly integrating himself into the songs, some of which are twenty+ years old! "I just wanna work and get high!", yelled Perry after that one, earning a lot of shouts in solidarity for that. 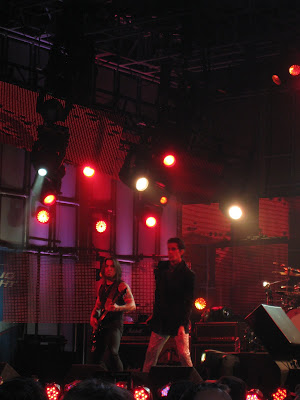 The last one of the far too brief set - but enough to STOKE Steph and Maryjane for their first show - was the epic, "Ocean Size". It's just perfectly titled, as this song is always HUGE. I love it so much. As did the entire audience begging for more when they were done. Screaming their heads off! Perry said, "For the second half of the night, we're partying. But not with you." Burn! People laughed. As they turned to exit the stage, Perry said, "Party! The country suffers for the lack of partying". So THAT'S the problem here. That's fixable! Phew.

Thanks, Jane's, for another great GREAT time. Every time.

The Great Escape Artist! October 18th! Get yours.

(And all the other albums if you don't own. Each is crucial.)