I am a bit bothered by some things lately, and with all the brothers and sisters out protesting with arms up on Wall Street (and it's spreading!), I need to address at least two issues (three counting how badly we need more bike lanes, but that's for another day) here in Venice.

One - if you go down The Boardwalk at night, you will not believe how many people are camped out to sleep down there. More than I've ever seen. I'm not sure if it's all due to economic situations or if a lot of it is by choice (or by addiction), but it's really sad to see. Especially when the Lincoln Place Apartments over there behind the Ralph's on Lincoln are - and have been for years - totally empty. Patrol guys bike around the perimeter to make sure no one is squatting or whatever. ACRES of empty, unused housing is sitting there rotting while we had the first big rain of the season the other night, and scores of people slept outside in it down at the beach. That is WRONG. Even if it's just letting people crash out there until they sort out what they're going to do about it all, at least it would be a short-term solution to get a LOT of people in out of the cold. Really.

Two - There are new robot looking trash cans down at the beach that are locked to prevent people, I guess, from digging in them to get the cans or bottles out. We all know Los Angeles/California budgets are broke, but the few coins that recycling revenue could bring them cannot possibly be more than the fancy new trash cans cost. When someone is at the point where they need to be digging through disgusting trash cans to get a couple cents to eat food, and we're not LETTING them do that (!), how can we feel like that's right as human beings?

These are the kinds of things worth protesting over. And we can all see for ourselves that when the PEOPLE band together ... things get done. Things CHANGE. So Let's go.

On an entirely different note (but it IS about sleeping on the beach), look at this dream of a nap set-up we came upon the other morning on the beach: 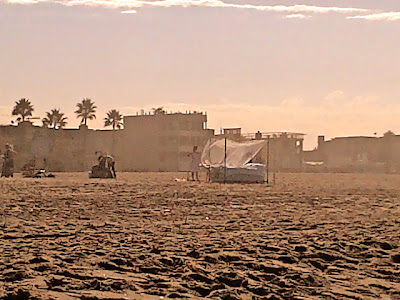 Once again, Venice ... the good and the bad go together. It's up to us to make sure the good persists.
Posted by CJ Gronner at 4:13 PM