Tom Morello: The Nightwatchman has been all over the place alongside Occupiers, helping them to be heard. In fact, he opened his sold out return home show last night at The Troubadour by saying, "I'm The Nightwatchman, and this has become much more than a One Man Revolution!" The song of that same name opened his fiery set, and it was real clear from the outset that since the early Nightwatchman days of Tom out there singing his protest songs in coffee shops, trying to drown out the espresso machine, he is certainly no longer alone in the struggles we all face - together.

Fresh from Occupy LA earlier in the day, many of Tom's new friends from downtown were in the building (as he gave out free tickets!) and were extra vocal, extra into it, the whole night. (One hammered but charming young Occupier asked, "Can I occupy your heart?", so the movement is even providing new pick-up lines!) The entire evening, I just kept thinking, "FINALLY!", as I've been alongside Tom at many events, for a long time, and it's so exciting to see people actually starting to more than listen to his songs of freedom, but to ACT on the injustice that has been so sickeningly rampant in our country - and the world - for ages. 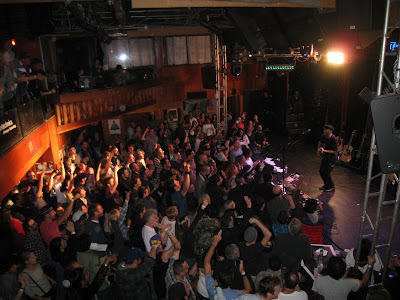 He was playing with a home team advantage, sure, but this crowd was special anyway. SUPER FANS - singing along every word, lowering their heads and nodding at the profundity of the lyrics, raising fists the entire night, yelling their solidarity, and generally going all-around nuts. "Dogs of Tijuana" began a clap-along that kept up all night, with the rowdy fans beating time along with Tom's foot on his stomp box. WOOOO! When that one ended, Tom said, "Over the course of the last 6 weeks, I've found my Occupation!" Sure enough, as he's like the folk singer Superman these days, flying into Madison for the Union battle last winter, playing benefits all over the place, speaking his mind on the likes of the Olbermann, Smiley, and Maher shows, and more recently, showing up to play for any Occupy _________ site he's remotely near. There is no one that walks the walk like Tom Morello. Period.

"Flesh Shapes The Day" and "The Fabled City" were both great illustrations of what a good ring-leader Tom is ... one second it's absolute pin-drop quiet, the next it's mad clapping and screaming along, then back to quiet whenever he asked for it. Masterful crowd control, really. The Cops at the various Occupations could learn a thing or two from The Nightwatchman. The last lines of "Fabled City" go, "On the wire outside my window, there sit one hundred swallows. And I suspect that if one flew, then 99 would follow". Hearing the cheers after that one, it was hard not to think of those 99% of us finally following.

Carl Restivo from The Nightwatchman's Freedom Fighter Orchestra joined him on stage to play the Ben Harper part on Tom & Ben's duet off the new World Wide Rebel Songs album, "Save The Hammer For The Man". They wrote the song together after some mayhem during our 2008 Justice Tour stop in Chicago, when Ben asked Tom if he wanted him to bring down the hammer on some folks. Tom replied, "Save the hammer for The Man" - and a song was born. Carl is so talented and versatile, I've heard him be everyone from Sting to Rhianna to now Ben. Badass. Tom brought out his electric guitar for his scorching solo on that one, and peoples' eyes spun like the Mac pinwheel thing as they watched. Really. 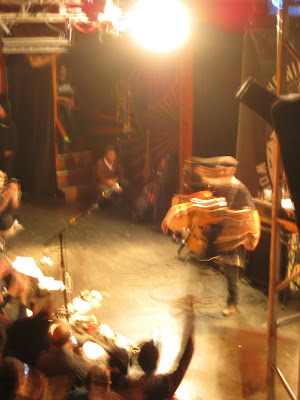 "I don't write many love songs, but I did write one for my new guitar, 'cause sometimes it's the best friend you have in the trenches," said Tom as introduction to his new song, "Black Spartacus Heart Attack Machine". "Union made, Let Freedom Ring!!!" He proceeded to play that new guitar so hard he broke a string. While adjusting from that, Tom asked for people to go insane for the next 15 seconds of tuning, which they obliged, loudly. In addition to all the fighting for justice, being a husband and parent, having two other bands, etc etc, Tom has also written a comic book called Orchid, a class conscious comic (finally!) that was available at the merch table for $1. Alongside "The Nightwatchman's Little Red Book". Rad.

Carl and Tom did an acoustic duet on "Union Town" that went over huge with the audience, and then they harmonized, and Tom lit up "The Fifth Horseman Of The Apocalypse" with some beautiful, intricate, flamenco sounding guitar solos. Completing a trio of songs from the new album, Tom told of how he was inspired by the empathy of 9/11 and the recent 10 year Anniversary of that awful day, and thinking that people in our country would NEVER go to war again if we could see the victims in other countries like we saw our victims that day. Tom kept waiting to hear someone sing that song in the aftermath, and when he didn't, he wrote it himself. "No One Left" is quiet and beautiful and heavy, and the joint was silent - and not just because Tom said, "Quiet, or The Nightwatchman will show you the back of his hand". They felt the reverence all on their own, as it was impossible not to. 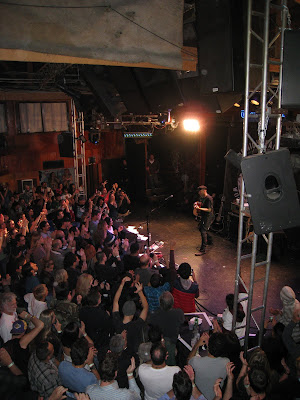 Tom's Aunt Isabel taught him at 4 years old how to root for the Underdogs of the world, because she turned him into a Cubs Fan. He joked that she died without ever seeing a Cubs Championship, so he had to have kids so that some Morello might one day have that joy. In tribute to his Aunt, he got out his Irish War Drum and banged out "St. Isabel", one of my favorites. "ROCK ON, TOM!!!", someone yelled, and Tom said in reply, "I WILL rock on, thank you!" And so he did/does.

Word came in of hundreds of arrests at Occupy Oakland, and Tom said, "That just means we're getting under their skin, and we're doing the right thing. There are 1,300 Occupations as of now, and I suspect that will double in the next couple of weeks. They push back, we come back stronger and smarter!" YEEEEEEAAAAAHHHHH! And that's "The Road I Must Travel". Everyone sang along on that "Na na na na!" chorus, and I was delighted to see a whole gang of much older, very grey patriots standing up and clapping along with huge smiles on their faces, hanging over the balcony, as into it as the young whippersnappers down front, some of whom maybe just got drawn into activism for the first time. It was exciting to behold.

But not as exciting as what came next. I think if I could choose one song to show someone what Tom Morello is all about, playing-wise, I'd want them to see him play "The Ghost Of Tom Joad". He's made the Springsteen classic his own, and I'd go so far as to say he's blown it up to be even better than it was ever intended to be. Carl kept the acoustic melody going while Tom melted faces with his electric Arm The Homeless virtuosity ... SO good. I've seen it played a lot, and I still get chills every time. The solo with his teeth doesn't hurt either.

"And Tom said, Wherever there's somebody fightin' for a place to stand, or a decent job or a helpin' hand, Wherever someone's struggling to be free, Look in their eyes, Ma, you'll see me" ... could have been written verbatim by Tom Morello, and it was even greater that his own Mother, Mary ("The 88 year old Matriarch of Molotovs!") was there, smiling down from the balcony, fist ever raised. It was extra special watching her watch Tom, as the room exploded after that perfect example of the genre henceforth known as "Pure Folk Heavy Metal Thunder".

That one prompted a very true chant: "The People! United! Will Never Be Defeated!" which was instantly stopped when Tom played his gorgeous (and Mary's favorite) "Garden Of Gethsemane". From the sheer uproar of a moment earlier, now it became so hushed in there that Tom could do his thing where he sings away from the mic and you still hear him perfectly. Magic. 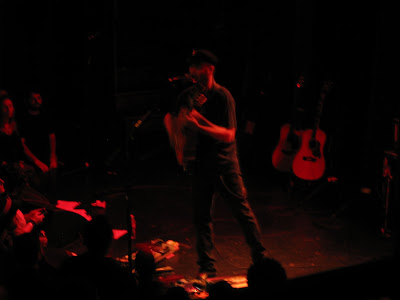 "Woody Guthrie would be 99 today, and he would be at Occupy LA!" said Tom, as he directed the people for the "Class War Anthem" of "This Land Is Your Land" - with all censored verses restored ... and moshed to! "This is the Valley Forge of the Movement ... We have to weather this winter ... And we will have an American Spring, because my Brothers and Sisters, This Land is OUR Land!"Woody would love Tom, I'm sure, and love even more that his kindergarten classic has become a rock star's rousing set closer that has everyone in the place singing along and jumping up and down as one ("From Grandmothers in the balcony to guitar geeks down front - SING!") ... and I repeat as ONE. Which we all are. 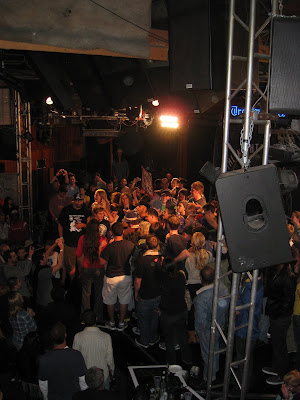 People went so loudly bezerk after that one, that Tom then invited EVERYONE to join him on stage for his new sing-along title track, "World Wide Rebel Songs". Nearly everyone present took him up on his offer, squishing in around Tom so close you couldn't even see him anymore. Cool - and rare - as that is of him, it's also funny: "I know it's exciting, but don't step on my shit!" "Someone is petting me, stop that, it's distracting!" "OK, one guy in front here is going to film this and put it on YouTube. The rest of you are going to live in the moment for once!" {A mf ing MEN! - Auth.} "Someone just put a baby in me on stage!" "If you forget the words, just raise a militant fist!" It was total mayhem up there, but the Rebels onstage DID sing out loud, all night long ... and it was good. Real good. 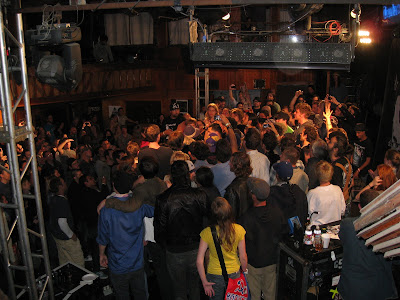 Tom's traditional closing statement of, "Take it easy ... " was answered in a loud collective yell by the whole gang, "BUT TAKE IT!" and that turned into another chant of "We! Are! The 99 Percent!" over and over until The Nightwatchman had extricated himself from the swarm and left the stage. 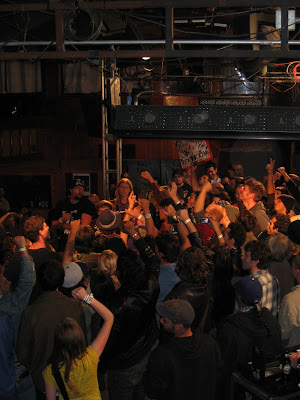 Looking down from the balcony at all the spirit and enthusiasm and camaraderie and SOLIDARITY in the room as it all went down, all I kept thinking was, that truly and finally, WORLD WIDE ...

And The Nightwatchman is playing the soundtrack.