Jane's Addiction last played at the John Anson Ford Amphitheater 23 years ago, and returned to that same stage last night (and tonight), looking and sounding as fresh as they ever did. The first thing I heard when I found my spot in the little, tiny, super-intimate Ford venue was a guy nearby saying, "Well, this is a pretty great spot for a rad show!" And boy, was he right. The Ford is all nestled into a Hollywood hillside, surrounded by trees, the crescent moon, and stars. And on this night, a bunch of lasers and smoke and serious rock and roll. 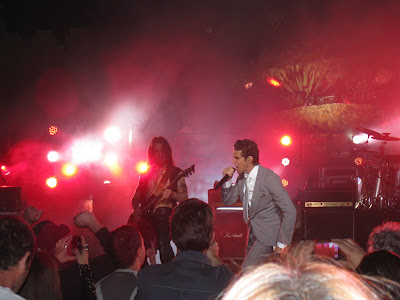 The night had two opening bands, Boys and IO Echo, both bands fronted by women that sound straight from the 1980s (Boys even did a Pat Benatar "Love Is A Battlefield" cover). I was happy to see some ladies on the rock scene, and they did a good job of engaging the crowd, earning some appreciative hoots and hollers. This not easy with a crowd that was clearly there to see their beloved Jane's. Speaking of the crowd, it was an interesting one to observe ... surprising amounts of grey hair, but also a lot of the usual young Hollywood Hipster variety, and one new friend even admitted, vaguely embarrassed, that he'd never heard Jane's music before. Blasphemy! His mind was about to be blown.

That would prove not that hard to do, considering the beauty of the night and the venue. I went over with two of my friends that I first saw Jane's Addiction with at the very first Lalapalooza in 1991, Tony and Brandon. We were as excited to see them today as we were then, and even though time and circumstance have blessed me to now actually know the Farrell family, the thrill doesn't go away at all when the lights go down and you hear those familiar chords ring out. WOOOOOO!

Pink Floyd's "Shine On You Crazy Diamond" came on, the lights went down, people stood and screamed before one thing happened, on anticipation alone. Then Perry strolled out in a sharp suit and Dave, Stephen and Chris Chaney took their places, and they immediately tore the place up with "Whores". People were going crazy (It helped that the Ford generously lets people bring in their own booze - yep). Perry's face was one giant grin from start to finish, and the fans reflected that back to him all night long. "WE'RE HOME, LA! And we're throwing a party, you know why? Just because!" With that they threw down "Just Because", and already the guy beside me (who had painted the Jane's banner hanging alongside the venue and had never heard their tunes) had his arms in the air, screaming. Pretty sure he's ordering up all the Jane's catalog today. 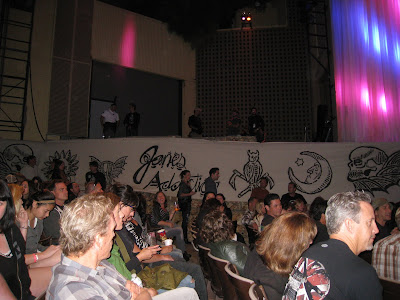 While the boys in the band were down front kicking out the jams, the girls (led by Mrs. Farrell, Etty) of the Jane's world were climbing around up above among the trees and rocks, looking like the sexiest wood nymph fairies ever. The whole scenario was dream-like, with lights and smoke and props and cool ... one felt fully transported through the music and the visual feast - and I was totally sober.

Perry shouted out to some L.A. towns ("Venice!!!") and said, "I LOVE living in L.A. - you all make me feel so good, I could just float over Los Angeles", and as fluid as his dance antics are, you believed that he could. A bottle of red wine was now in Perry's hand, and he swigged liberally from it as they blew up "Ain't No Right" and "Ted, Just Admit It" in a back to back beat down. Perry screaming "Sex Is Violence!" while Etty and Stephanie rocked on the sideways rocking chair in S & M style outfits was pure, classic Jane's. By the way, it should be noted ... those ladies are damn fine DANCERS. It's easy to get distracted by the sexy get-ups and props, but they have serious, classically trained MOVES. Super fun to watch. Stephen Perkins particularly brought it on this one, per usual. After that one, Perry said how they'd previously played the Ford in 1988, "But Dave doesn't remember it". At that show, Axl Rose approached Perry and said, "You're a real artist, Man." Perry laughed and said, "I don't think I said anything back." Again, classic. 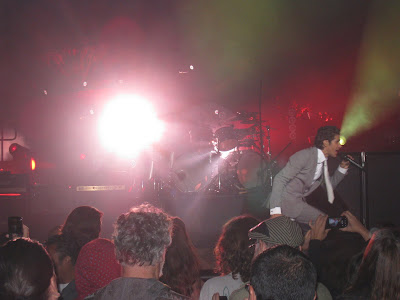 Perry spoke about the fancy threads he was wearing (and soaking through with the sweat of a consummate entertainer), and said, "But back in the day, I used to just steal shit!" So of course they launched into a fiery, "Been Caught Stealing", that pleased the crowd to no end. Shirtless, perfectly preserved Dave blazed, both on his guitar and on the smoke that his guitar tech came out to light for him, mid-song. Badass. 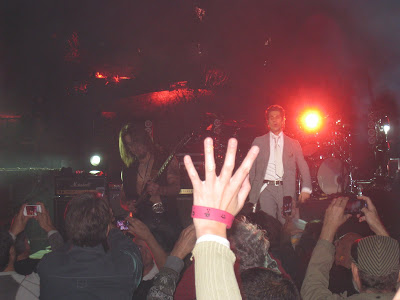 Jane's Addiction is releasing their new album, The Great Escape Artist, on October 18th (!!!), and they played a new track from it next, "End To The Lies". There was a bit of the lull in the crowd typical of people not yet knowing the words and biding time 'til they hear their next old favorite tune, but it has all the makings of being a future classic. Perry's voice is so inimitable that everything he sings sounds epic and familiar. I cannot wait to hear the whole album of new jams, based on this one alone. At song's end, Perry said, "I love that guitar shit" and vocally imitated the metal slide sound of Dave's guitar, cracking people up. I totally agree with him, by the way. 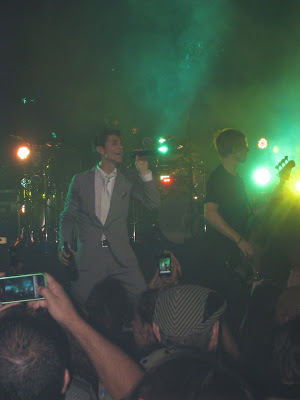 Sweet lasers began to swirl and Perry said, "We kick ass all over the world, but we can't wait to get back to L.A. - and we let 'em know, L.A.! Fuck yeah!" That brought screams that only intensified when they began "Ocean Size" - which is exactly how big that song felt. SO good. Right from there, the place turned all black and red, and the ominous opening strains of "3 Days" began. Etty and Stephanie were bound and gagged and gyrating all over the stage, acting out the story of those 3 Days of song lore. Dave had a blistering solo, and Stephen had an extendo drum session that had fan guys slapping fives. Literally every single camera phone was out and capturing (or trying to - you really had to be there) the scenery. Here's a video that I snaked off of YouTube that gives you a little feel:

Perry recently had knee surgery, but you would sure never know it. He was just NON-stop: dancing like a marionette let loose off his strings, strutting, posing, jumping, ruling. The big anthem-y one off the new album, "Irresistible Force" featured lasers and pictures in the smoke, and every marking of a Jane's hit. From that we went right into a medley of L.A. tunes - The Doors' "L.A. Woman - The Germs' "Lexicon Devil" - X's "Nausea" - that was a total highlight until "Mountain Song" came next and easily topped it. Girls popped out of a box on the side of the theater, but I don't even know if many people noticed them grinding around, so transfixed were they by Perry's own moves. My friend said, "I was Perry-lyzed" - meaning he didn't notice much else. Most everyone there would understand. 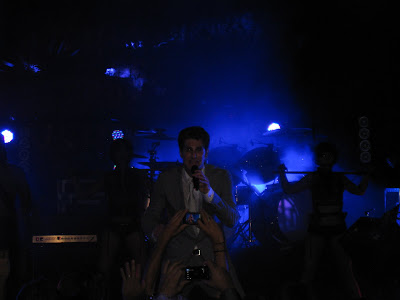 While slapping and shaking hands all night with people down front, Perry said, "We're under the stars! I fucking love living here, it's a dream!" There was a guy down front from Israel, and Perry said, "We want to hang out with you in Israel. AND the Palestinians. We want peace in the Middle East!" (He gave the guy his bottle of wine at show's end, saying, "L'Chaim!" Rad.)

"Stop" was next, and it was crazy, and no one wanted it to stop. Every voice sang along the "Hum, along with me, hum along with the t.v., Whoa-oh-oh-oh ..." part, making Perry smile as confetti fell down on everyone, looking like snow in the laser lights. So so good.

After a short departure, which the audience filled with chanting and clapping for more, the band came back on to set up for an encore. Perry spoke about how now days he has to "get up at 7 a.m. to help my kids put on their underwear. That part sucks." And how he hopes they grow up ok living in Los Angeles ..."Uncle Dave is gonna have a little talk with them", which cracked them and us up. (For the record, they are wonderful kids, and are going to be epic adults, I assure you). 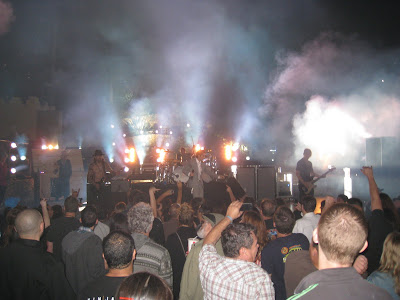 All the guys lined up at the front of the stage, with Dave now on acoustic guitar, and Stephen now on congas and steel drum - which we knew meant "Jane Says". It did. Once again, the entire amphitheater sang along to every single note. When the guys stood at the stage's edge at the end and received the crowd's adulation, they were shining back the beaming faces of everyone there. From the guy that has never missed an L.A. Jane's show, to the guy that had never even heard their music before, everyone there was equally thrilled. We yelled for more, and everyone has their own personal favorites they still wanted to hear, but no one there could have asked for a more beautiful night outside, under the moon and the stars, with their friends and the music they love. 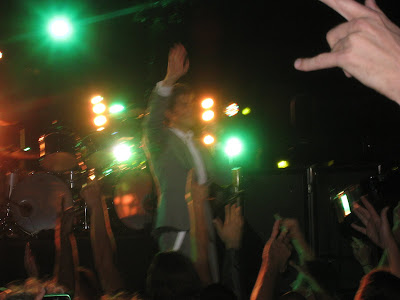 As Perry said, "It's like a dream". A really, really good one.