The 2012 Other Venice Film Festival

The 8th Annual Other Venice Film Festival was another success - and a blast - this year, featuring wonderful work from our own local filmmakers, as well as entries from around the world. The festival ran from October 13-16 this year, and it all started out with a big rager at Beyond Baroque for Opening Night. 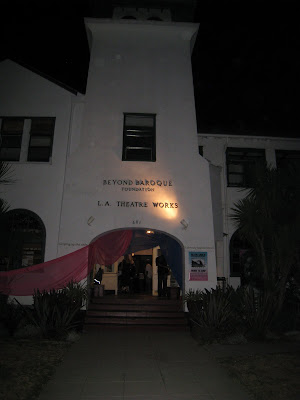 The Featured Artist of the OVFF was William Attaway, whose art was displayed in and around the entrance to Beyond Baroque. It was great to see so many creative people all coming out to support each other in their different mediums, and something that I hope will only grow as more and more, our circles overlap. 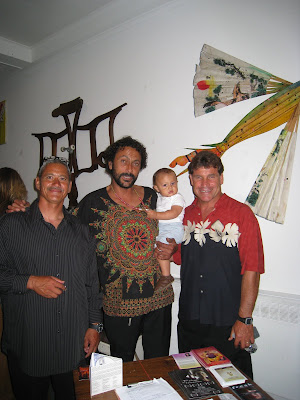 The first event drew all sorts of local legends of skate and surf, as the Feature competition kicked off with a screening of big wave surfer, Allen Sarlo's, documentary, Work To Surf. It was the hottest night of the year in Venice, I think, so we watched the film in chairs outside under the stars - and close to the open bar. I chatted a bit with festival founder, Reuben DeLacasas, before the film started, and he said they had far fewer feature length submissions this year, and the ones that were submitted were mostly documentaries, as people are into them and really, real life is better than fiction most of the time. With the economy being what it is these days, shorts are more prevalent, and easier to produce, obviously. The economy being down also severely hampered the sponsorship support that has been contributed in past years, so most of this year's Festival was coming out of Reuben's own pocket. Ouch. Hopefully that can be sorted out for next year, as it really is a valuable display of the deep talent pool here in our Venice. 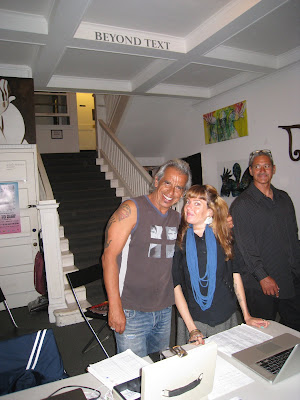 Work to Surf was super entertaining, and most deserving of the Best Feature Abbot Award that it ultimately won. Jaw dropping big wave surfing plus laugh out loud funny at times, it takes you to the "War Zone" of 1970's Venice, when, as Jeff Ho says in the film, "Their JOB was to go out and tear the waves apart!" Then they grew up, and Allen Sarlo decided to get into real estate so he could subsidize his travels to go surf big waves, and there you get the title. The working just to surf tied in with the soul surfing ethic, and Sarlo and his good friend, Mark Foo, made a pact that they would always "Work to Surf". Foo died at Mavericks on a day that Sarlo didn't go. He was crushed by his friend's death, and the film is dedicated to Foo. Known as "The Wave Killer", Sarlo is described in the film by Kelly Slater as, "The thing about Sarlo is he's just a good guy ... until he gets in the water, then he's an animal!" And now, still working to surf, Sarlo's legacy will be carried on by his two surfing kids, Sophia and Colton. I loved this film, and agree with Mr. Slater that Allen Sarlo couldn't be a nicer guy. 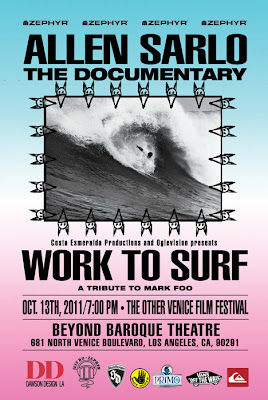 The bar re-opened for an intermission, and then we saw another good and funny skate film, A Day At The Pool, about how maybe a guy named Benton Shakely was really the guy who started the whole skating pools thing. After that, the party was on, and off the record.

Friday night's "Premiere Night" segment saw the brilliant short film, Admissions, (directed by Harry Kakatsakis) steal the show. It was produced by local Venetian, Gavin Behrman, who told me that they finished it under the wire, as it was important to him that it premiere in Venice. Starring Academy Award nominee, James Cromwell, as the guy at the Admissions Desk leading to Heaven or Hell, the film is a (15:00 timed) discussion between an Israeli couple and the Palestinian suicide bomber who killed them. It is so wise and well written (by John Viscount) that I honestly feel like it should not only win the Oscar for Best Short Film next time (maybe it will!), but probably deserves a Peace Prize too. Honestly. As Cromwell says in explanation to both outraged parties, "You can't want Hell for other people without being in hell yourself". It's very deep, very profound, and should be required viewing for people in conflict the world over. After this (truthful) gushing, you will be happy to know that Admissions won the Abbot for Best Short, (voted on by the audiences over the weekend) so it's off to the races! GO!

Short Films that stood out to me on the standing room only Saturday, (which ran very behind, as everyone shrugged, "It's Venice") were Sandbox Lullaby, directed by Joey Indrieri - a very dark tale shot all around very sunny Venice, and The Unicorn Girl, a beautifully shot fantastical story about a girl (local Amelia Mulkey, who also directed) - and a unicorn. Thanks to Amelia's swag of a headband with a unicorn horn attached, I also had a Halloween costume! Win, win! The New Bicycle was a good one all the way from India, by Arshdeep Singh Jawandha, about a kid who is desperate for a bike - Venice people can understand that one.

The Abbot for Best Music Video went to "Love Is Love" by Gabriela Tagliavini, and I had to miss that section as there was a beautiful wedding on the beach in Venice that I had to attend. But Congratulations to all the winners, and to everyone that participated at all! Making a film is hard work, from idea to screening, by everyone involved, and it's kind of a drag that there even has to be a "Best" of any of it. Having said that, the ones that won were really, really good.

Everyone had another ball at the Closing Night award ceremony, hosted by the hilarious Jill Jacobson. The three Abbot Awards were given out (cut back to three this year as those things are expensive) and the fact that great film making is alive and well in our community was duly celebrated. It's a special festival, and also a lot of work - done mostly by Reuben DeLacasas by himself with volunteers. There may have to be a change of venue next year, as it's all been too expensive, and even non-profit Beyond Baroque wouldn't budge much on their profit, but maybe the local community can help each other out a little more and band together to make this thing awesome - and not break one guy's bank. Venue donations, sponsorships, HELP - I think we have it in us, right?

Cheers to the Other Venice Film Festival, for a great time/s, and for giving all this excellent and thought provoking film work a place to be seen, right in the neighborhood.