How great, a brand new decade! As usual, we start out thinking "Start fresh. New possibilities. Improve on what I did last year. Remember to write '11' on checks and stuff instead of '10'." Along with all of that, I am determined, with this burst of new year energy, to try (and accomplish) things I've always wanted to, to CHARGE forward and DO!

Well, along those lines, I've been strangled with envy most every morning when walking along the beach and seeing people out in the water Stand Up Paddle Boarding (SUP). They glide along the water so smoothly, and it just looks so great, I've been meaning to try it for ages.

Enter Sydney Lovelace, a longtime friend and Venice Guy. He teaches swimming, surfing, SUP, and just about anything water related, through his business, L.A. Surf and Swim. Every time I've bumped into him on the streets of Venice, I keep telling him I MUST go out on the SUP with him. We waited all Summer '10 for a warm sunny day, which never really happened. And so it was today, um, a cold (though bright) January day, steeled against the frigid waters with my new year's resolve, that we just went for it. 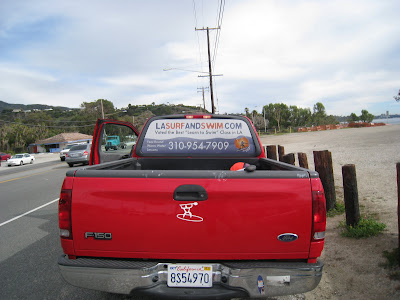 I talked my BFF Steph into braving the icy Pacific with me, and we headed over to Sydney's place on Brooks Ave., where the super warm backyard pool handles the swimming lessons part of Syd's business. We gathered up the boards, paddles, towels and Booda, Syd's surfing dog, and loaded into Syd's truck to head up to the beach break just past Topanga, where we were going to learn our new lifetime sport. 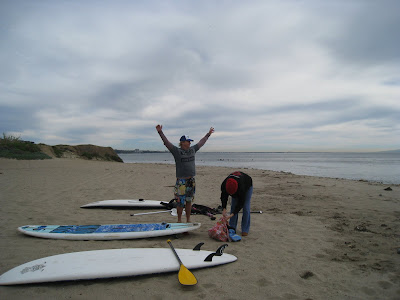 Driving along PCH, we chatted about it all. Syd grew up in Nashville, and then headed to Florida State on a swimming scholarship. That led to Windsurfing, which led to straight up Surfing, and a move to Southern California in 2001 to be where it's at (aka Venice). As we drove along, and the water just kept looking chillier, Syd explained to us the basic stuff about SUP. A great analogy that kept coming to my mind as I was actually doing it, was when he said your body is kind of like a computer searching, or riding a subway with no hand hold, and it keeps adjusting and finding its balance as you go. I got that. 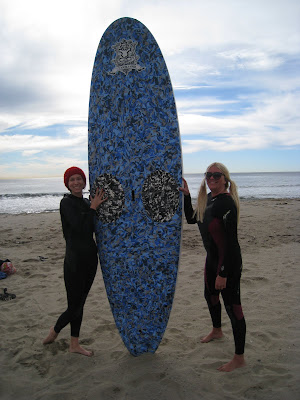 Soon enough we were unloading the truck and yanking on our wetsuits to begin with a quick little pointer session on the sand before we braved the water. Some stretching, some general tips on where to position your body and your paddle, and it was time to go for it (after the obligatory Duke Kahanamoku type snapshots, of course). 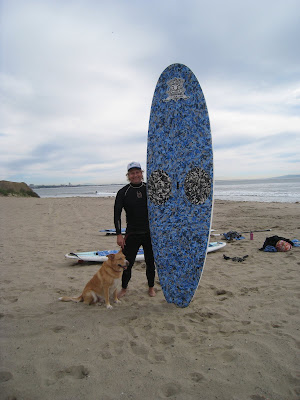 We started out on our knees to get past the breakers, and as rocky and slippery as the shoreline was, it was still pretty easy. It's so fun to ride up and over the waves as you head out, that I got cocky after getting out in the open water, still dry. I thought, "Maybe I'll never go in the water all day, and didn't have to worry about being col-" SPLASH! Yeah, you gotta keep your eye on the ball/balance out there, for sure. On my second session of the day, as the waves grew bigger, I got WORKED getting out, but even that was no big deal, as I've had plenty of practice wiping out on a regular surfboard. Just fall, sputter, climb back on. Rule! 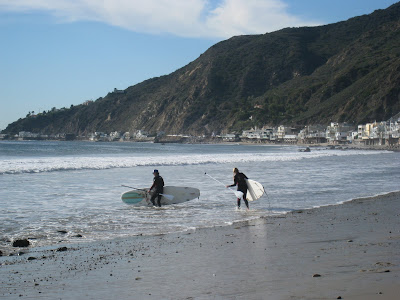 As we got past the breaking waves, it was time to stand up. The boards are much bigger and more stable than regular surfboards, so it's really pretty easy, once you find your balance. And OH, the rewards! 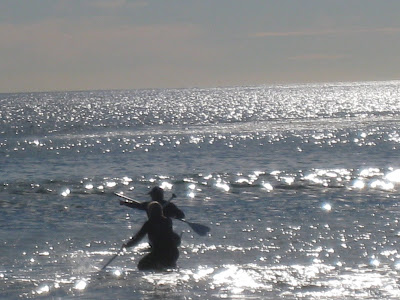 Cruising along on the open sea, looking down into the clear water at GIANT kelp forests, like being on top of Jack's Beanstalk, you couldn't begin to see their bottoms. Then I heard a snuffle, and not one, not two, but FIVE seals popped their heads up so close I could see the color of their eyeballs! It was like a Whack-A-Mole game, how they kept popping up their sweet heads. Then about five minutes after that (though the seals pretty much hung out the whole time), a dolphin's fin broke the water no more than 15 feet away from us! 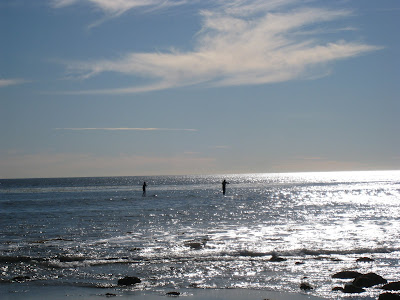 I was so happy I was about to burst - the entire time. The wetsuits did their job and I wasn't even remotely chilly once. Quite the opposite, when it was time to head in, I didn't want to. I could have stayed out there until dark ... though as I'm typing I can already feel my arms and shoulders stiffening up a bit. Wait, it was EXERCISE too?! I'm in. For life. And anyone at all could do it, it's so chill (once you get out past the waves). Sydney said a great thing about SUP is that you can sight see, or get radical. You can go out on big waves or no waves. It's a sport that is so versatile, you can custom fit the experience to your own vibe. 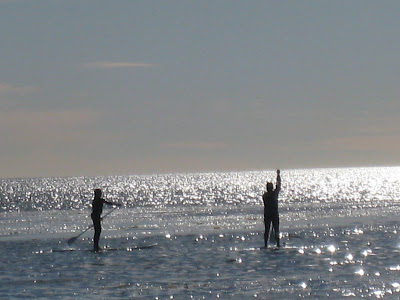 When the final wave propelled me toward the shore, I felt so exhilarated and just READY, for whatever may come my way this year ... this life. I'm still damp and buzzed from it. It was just so so great! I encourage everyone to get out there and try it, because as I said to Syd and Steph, "It's my favorite thing I've done this entire decade!" And I meant it. Of course, five days in, there's still a bit of time for something to supersede it, but it's going to be a tough competition. And when you do go, you should go with the kind and excellent teacher, Sydney and LA Surf and Swim (voted "Best Learn To Swim Class In L.A."), who teach all ages pretty much all water sports. As Sydney put it, "From the cradle to the wave". Awesome. 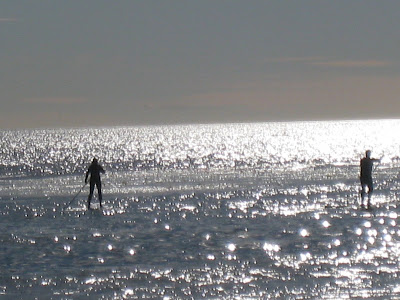