I sat down recently with the founder, owner, programmer, pretty much everything-er of KVB, Michael Linder, to hear about his vision for a station that's all about Venice. KVB is run out of his home/studio, perfectly located right above Ocean Front Walk, with the Boardwalk hubbub and vast blue ocean right outside the windows.

The whole situation is operated from a computer and a few techno boxes, to a global internet audience. I learned from Michael that the first radio station in 1922 Venice was KFAV, a tiny 5 watt station that went on air to promote the new Ballroom at the beach. Along those same lines, KVB plays an all dance format, the only one of its kind in Los Angeles.

Linder has a long and storied broadcasting career, beginning with an early gig on WMCW (Milk Center of the World), a local farm radio station in Wisconsin. From there, he went on to interview interesting people (The Ramones, Tom Waits, John Lennon at his green card ceremony ...), and even helped to negotiate with Saddam Hussein for the release of 227 hostages in Kuwait. There's a picture on his book shelf of them together, and Linder said, "Saddam was always very good to me ... he was a small town gangster that took over a country, who Bush Senior then double-crossed after he saved our ass for ten years with Iran." You wind up going down a lot of interesting conversation paths with Mr. Linder, that is for sure. 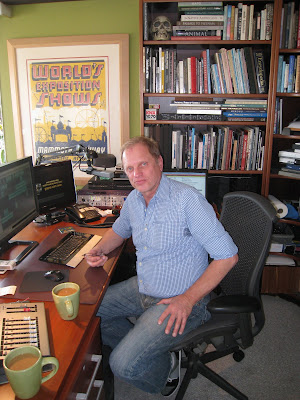 Radio led to TV news, on camera. Then work as a producer on Entertainment Tonight, then creating America's Most Wanted, which "reinvented t.v. ... it's all reenactments now!" Linder made a move to Tokyo to work on US/Japanese television co-productions, and then after fondly recalling his first stint living in Venice in 1973 (in a "No tell Motel"), he came back to the beach, for 20 years now.

Most recently, Linder grew bored with doing radio news, and thought that since so many people are interested in both Venice and Dance Music world-wide, a Venice radio station could be both a hit and a community service. There is brand new cd quality dance music streaming every day, "a modern art form that is shaping acoustic realities ... with all the International DJ's out there now, it's a dance planet." I asked about the strictly dance format, as my own ears are more guitar attuned, and he said, "Dance music is party music and Venice is a party town, so why not feel good and dance?!" I could not argue with that a bit. And not quite a month in, (the station debuted on New Year's Eve with a 29 hour non-stop Rave) there have been no mass Rave hospitalizations reported due to KVB as yet. Bonus.

KVB is also "a radio blog, in a way." Meaning that the local news and human interest stories posted on the site are a snapshot in time of every day here in Venice. Community issues and interests are discussed in interviews with people like the VNC's Linda Lucks, on the State of the City (if we were a city, ahem), and correspondent Tibby Rothman interviewing surfboard shaper Scott Anderson. Man on the Street, Zuma Dogg, with a story on local street artist, Kid Iconz, and another story giving out medical marijuana brownie recipes. Clearly you do not have to deal with the FCC in the online format - another bonus.

The Podcast stories are all entertaining, and offer a slice of life to listeners far and wide. Joe Praino, a comedian and KVB reporter, recently went around to bars asking the mixologists their feelings/warning them about Lindsey Lohan moving into the neighborhood. Another one about the guy who walks on glass on the Boardwalk, who says in his great accent, "I jump on glass, talk shit, and make people laugh." Classic, all. The street noise and crowd chatter add to the feeling that you really are having a nice time in Venice - even if you're not, because you're in Iceland or somewhere.

I asked Linder his personal feelings about Venice, and he said, as most do, "There's a creative energy bursting out of this place ... why would you want to live in Brentwood?! I've had a life long love affair with Venice. There's a hometown you're born with and a hometown you make for yourself, and Venice is that for me." (Me too!) He added that "It's the people that make you stay. Like the ladies at Small World Books, who CARE, and manage to stay open when so many others have failed. Waruku on Abbot Kinney makes me feel like I'm back in Tokyo. All the cute shops and restaurants ... walking down the Boardwalk on MLK Day was just amazing ... one guy had a sign that said, "Will do raccoon stuff for money!"

Linder's glee at his chosen hometown's creativity and uniqueness is obvious and inspiring. He did say, however, that he is "heartbroken by the way the community is being split in two - or more - about issues like the homeless and rv's ... the political rancor is as serious here as in the entire country." He is firm about not participating in neighbor vs. neighbor, and feels a real need to rethink political dialogue on all sides. Again - and why this is so hard to grasp, I'll never know - we're all in this TOGETHER. Or as Linder put it, "It's all about evolution, and how to get to the next phase. We're all going to get there together, so let's not beat each other up in the carpool." Yeah.

We talked about how Venice is so special because "People come here looking for people who are NOT like them. Diversity and individualism are worshiped and praised, and how many places like that exist on the PLANET?!" Sadly, but truly, not many. We agreed that we are incredibly lucky, and that we ALL need to remember that.

KVB.FM celebrates all of that, 24 hours a day, with both humor and balance. Linder and I ended our conversation as the Boardwalk and beach turned all golden outside the windows, and he said, "I don't know where this will go, but if you put enough good energy into it, good things happen."

True for KVB, surely, but true also for Venice, and the entire World.
Posted by CJ Gronner at 1:18 PM