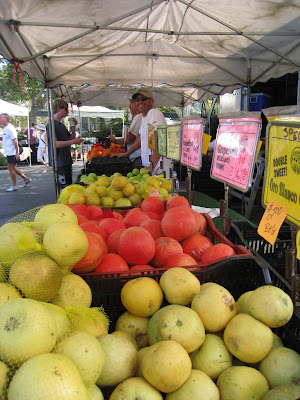 I think a great idea for anyone wanting to know about a place is to check out their Farmer's Markets. Most towns should have one by now, but you get real spoiled in Southern California, with its great year-round agricultural climate. I've been going to the Venice Farmer's Market for over a decade now, and it always a highlight of my Friday.

{Before I get to that, I want to tell you quick about a nice moment on the beach this morning. Jenny and I were walking along the sand and I saw a guy taking a picture of his (I think) Mom standing in front of the Venice Pier with her feet in the water. We have a thing where if one person of a twosome is taking a picture of the other, we always stop and ask if they'd like a picture with both of them in it. There's something lonely about it with just the one person, and you can only have so many of those photos you take of you both with your arm stretched out. So I said, "I think it's my turn," and approached the duo. "Would you both like to be in one?," I asked. The Mom looked kind of surprised to be approached by two blonde strangers, and kind of emotional. She said, "I used to live here, and I haven't been back in 40 years." "Wonderful! I'll get the Pier and some surfers in the background, then." She looked out at them wistfully and said, "You probably wouldn't believe it to look at me, but I used to be one of those surfers." I snapped the photo of her and her (I think) Son - it looked really meaningful to them, and I have no idea what was going on in their lives, but I think it had some weight to it. I smiled and said, "Welcome Back!", gave back their camera, and on we went. It just stuck with me for some reason. I was glad it was such a beautiful day for her.}

And a beautiful Friday should include a visit to the Venice Farmer's Market. I've been going there for so long now, we're all pretty much friends. The dolls at Polito Farms Citrus (Signores Polito & Roble) will always ask how my week was and hide me a juice (Blood Orange, in season) as it goes fast. The Salad Guy, Nathan, at Maggie's Farm will say to his co-worker, like he did today, "The Hot Lady right here gets flowers every time. No matter what." and throw a handful of edible flowers in my bag on top of my greens so I can adorn my little cakes and pies with them. He says this in spite of me being straight from the sea, with matted Fraulein braid loops and seaweed probably stuck on me somewhere, in a cut-up Jagermeister T-shirt. Because he's cool like that.

People line up to get their coffees from Steve The Coffe Guy. Little kids always get a free Gerbera Daisy from the Flower Guy/Girl. They love that every time. Kids also dig the Honey Sticks, 10 for $1. Kathy the Fish Monger has the best and freshest seafood for your table. The Peach People have slices cut up of the various kinds, all delicious and lip-smacking of Summer. The Cheese Guy also has little samples, that make you dream up all kinds of cocktail parties and combos you could create. Harry's Berries - always bursting with flavor as bright as their colors. There's The Bread Man - fresh and delicious. The Potato Guy, Multiple Vegetable People, super friendly and informative Plant People, The Apple Folks, A little Rockenwagner Bakery stand, The Mushroom Lady, The dashing French Bakery Guy, who has not only buttery croissants on offer, but sage advice and adages To Go. The nice Orchid Man, who gave me a Dragonfruit a couple of weeks ago that was such a brilliant fuschia inside, I had to photograph it. There is a Hummus Human, a Nuts fellow, A Candy/Fudge Table, on and on and on. You can create probably the best meal of your life with things purchased only from this Market. 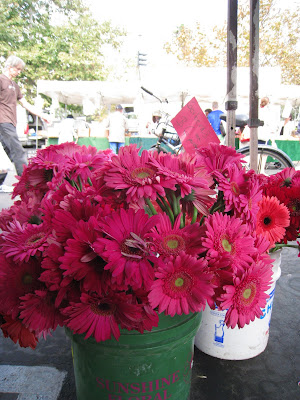 Even better than the produce and treats though, are the Neighborhood Faces. You will always run into someone you know, catching up quick in the sunshine (rain or shine, actually), and revel in how great it is and how lucky we are. This morning, for example, I had a bunch of people stop me and congratulate me on getting my bike back - "Is this her?!" (No, I'm still on my back-up bike, Trixie. Until Delores gets a new basket, lights, etc ... she is still resting comfortably and coping with her ordeal in her own way, but very happy to be home, thank you!). People seem to pay attention and care, if you do to the same with them, I have found. Give it a try.

Jim Murez is the Man In Charge of the Market, and he's an interesting character. We've pestered each other about various community activism deals for ages, and have a friendly rapport, laced with some stubbornness on both our parts. Lately he's been concerned about the Papparazzi, so he was not into getting his picture taken for posterity here. When I cajoled him about it, he said, "Let it go." So I Papparazzi'd him. Then to cancel out his gruffness, he gave me the T-Shirt I've been hounding him about for like seven years. A huge man-sized one, but still. Paid attention. Cared. Gave. That's what we're going for in this life, in this Blogtown, so he passed with flying colors. 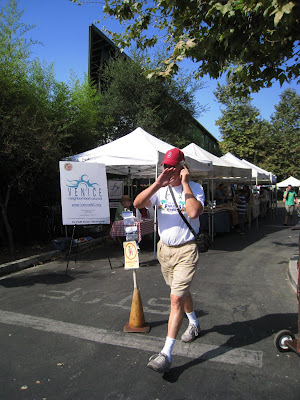 The vibe of Farmer's Markets changes, of course, from town to town. The Santa Monica one on Wednesdays is a more serious foodie deal. The Sunday Santa Monica one is Family Time, with Pony Rides, prepared foods, and all that. But Venice on Friday mornings (7-11) is quintessentially Venice. Hipster parents with darling, colorfully dressed tots. Old Folks buying the same things they buy every week. Local Restaurateurs grabbing up fresh herbs, vegetables and flower arrangements to adorn their tables. Green-wigged Chanteuse, Suzy Williams, flying through on her fun bike. The Kid Circle, where the Mom's Morning Out Ladies let their kids intermingle, squealing with pleasure. Hung-over residents, recovering from Little Friday (Thursday) with some fresh juice and good intentions. Dreaded Travelers, bargaining with the Vendors at almost Market-Closing Time, to get deals on what didn't sell. My Friends. Me. Almost all of us on our bikes or walking. A Once A Week dosage of Community and good food. It really is pretty darn close to The Ideal. 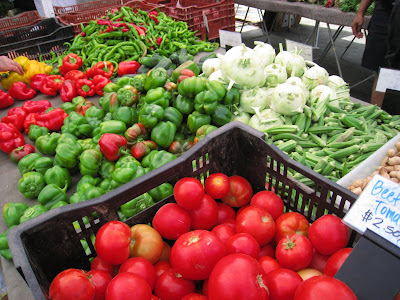 Something about a Farmer's Market makes people friendlier. Maybe it feels a little old-fashioned, more connected to the Earth, and that rubs off on attitudes. Maybe it's the recognition of the hard work that goes into raising healthy food. (Do yourselves a favor and read a mind-opening gem of a book by Barbara Kingsolver called, Animal, Vegetable, Miracle. They do a Family experiment and eat only things they grew themselves, or traded for with things they grew themselves - in a Four Season climate. You will hug yourself that you live (or could live) in California, where fruitful abundance is available all year-round. And maybe make some lifestyle changes while you're at it.) Maybe it's just the fresh air and knowing that a lot of people have the same good idea on a Friday morning, with a sunny weekend on deck. I'm not sure, but I know that I feel a big gap missing in my week if I can't make it for some odd reason. If you have out of town visitors, it's one of the best places you can take them to inject into their psyches why we love it here. You just can't be mad at anything when peach juice is dribbling down your chin and little kids twirl around you, clutching flowers in their sticky hands. That feeling stays with you too, when you're Home Again, Home Again, Jiggety-Jog, making something delicious and arranging your flowers, humming a tune to yourself that you heard in the air.

See you next Friday!
Posted by CJ Gronner at 1:48 PM