I awoke this morning a little ornery. I wondered if it was because official Summer is over, but think it was more that I'm bearing some extreme disappointment, and had no sleep and a headache because of it. The solution for this is almost always a dunk in the sea for me. ("The cure for everything is saltwater; sweat, tears or the sea." - Isak Dinesen) So I dragged myself down there to meet up with my Bikini Team for a swim, but was late so they were already out, standing by the lifeguard station, drip-drying. Brief pecks on the cheek, an explanation for my tardiness, and I ran into the water, throwing myself under and through the waves. Bursting out the other side of one, I saw my friends Drew and Scotty P. out in the water on their surfboards. Drew offered me a turn on his board, so I clambered on and got in position. After bobbing there for a moment, I glanced back and saw that I was probably about to die if I didn't jump off (no leash either), so I did. I reverted to a swim, as I didn't think I could take bodily injury on top of the rest of my woes. Which really aren't so big, but just felt like it this morning.

Drying off with my seriously great girls, I got over myself. They told me the sun had come out of the fog the exact moment I stepped on the sand - like, they noticed it - so I felt that had to be a good sign that things would look up. And they did. We had a splendid ride through the neighborhood, with lots of smiles and nods, making me love everybody all over again.

Except for the person who is currently driving around a truck with this painted - literally painted across it, like the guy (I assume) made the conscious choice to have this permanently representing him - on his vehicle: "The only reason Women fake orgasms is because they think Men care." I seriously almost crashed my bike. WHO (Tool, obviously) would even put that nauseatingly sexist B.S. out there in the world? Who would ever date him (a bigger Tool Woman)?! I wanted to take a picture to show you (I actually wanted to make a Citizen's Arrest) but didn't have anything at all with me. So if you see that guy in front of you driving, spit on him for me. Blech.

Back home, I had a gorgeous shower, and some lovely morning repast at The French Market, with a PERFECT Cafe Mocha, all in the bright Endless Summer sunshine. I saw my Virgo horoscope in the paper that said: "It's your turn to shine. Your timing and wit are keen, but now everyone notices. Who would have thought one afternoon would bring so much laughter?" Well, that made it hard to continue moping.

I decided to go on a mission with Nath to find that truck and see who drives it. I'm just so curious as to what kind of person throws that statement out there every day. No luck, he'd gone on to contaminate someplace else, so I went and sat outside at the Juice Bar in the sunshine, taking notes on ideas that blew through my mind. I joined Nathan in a little English lesson for Harold, a Spanish-speaking worker at the Juice. I schooled another guy on the FACT that Venice at 28th water gets an A Grade from Heal The Bay Report Card, while Malibu is almost always D or F. Look it up. I set up a time to chat with The World's Greatest Wino (stay tuned!), among others. I talked to a guy outside Windward Farms about how he recently retrieved a Woman's STOLEN Wheelchair for her! For the love of Jah, who steals someone's WHEELCHAIR?! I'm on an absolute Crusade to stop this madness ... through getting to know each other better, to understand one another's scenes better, to seriously strive to be better people. I was all fuming about that one - and also REVELING in the fact that this guy got the chair back for her (everyday Heroes, man!) - while pedaling down Abbot Kinney, when I saw this: 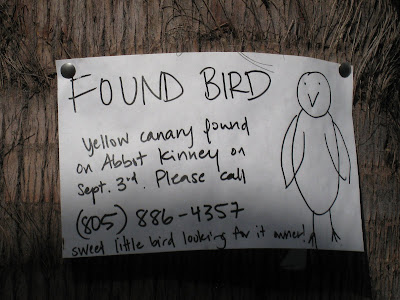 It's really amazing how high a little kindness and effort can elevate a mood. The sun and the sea are no slouches in that department either. It's a brand new day - Thanks, Venice!
Posted by CJ Gronner at 4:11 PM