When I wake up on the weekend and there's gloom at the beach, I immediately start plotting what Field Trip could happen if I'm not going to be on the sand. Last Saturday started out foggy, and I remembered that the West Beach Festival was happening in Santa Barbara and Ben Harper was headlining that day ... so a little Road Trip was in order. Nathan, Drew and I loaded into the truck and headed North, without any real plan, but also without any real worries. Things have had a way of working out interestingly lately ...

Right before we got to SB there was a little ticket fall-through, but the stupendous Edgar Oliveira lives up there, made a phone call and BOOM - 3 VIP Cabana wristbands. {Thanks, Edgar, Isabel, and Vivian Alexander of Noozhawk.com! You made our day!} Edgar even drove us down to the front gate like a Dad dropping tweens off at the concert, ("Call when you're ready to be picked up, have a good time, kids!"), so we wouldn't have to deal with parking. Now THAT is a good friend.

After the brief scramble, it was so nice to just breeze in and absorb it all. The West Beach Festival is entirely on the beach - like, in the sand. We were marveling at how clean it seemed, and how chill. They had booths for food, merch, hippie type wares, and a big old Heineken Beer Garden. We skipped all that to find our hosts in the nice Cabanas set up with couches and waitresses and no drunken teenagers. We missed Tom Freund's rousing "Hug Trees" performance, but heard that the toddlers dug it a lot. We rolled up right in the middle of the G. Love & The Special Sauce set, who had the whole place dancing around to "This Ain't Living". G. Love is always a good time roller, red baseball hat backwards and full of enthusiasm. He jumped into the crowd and reminded us all that "You've got to get on up to get down" ... and everyone complied. It turns out that G. Love still enjoys his "Cold Beverages" and he had a bunch of people joining him on that too. I was blowing my little harmonica necklace along with him to his "Love song", namely "Booty Call". That led into a little Beatles cover of "Why Don't We Do It In The Road". It looked like a few couples were about to do just that (or in the sand, rather) during that one, and no one would've cared a whit. We got "Peace, Love, Happiness" from G's latest "Superhero Brother" album. G. Love/Sauce wrapped up their set with "Bustin'" and I can report that people dug it. 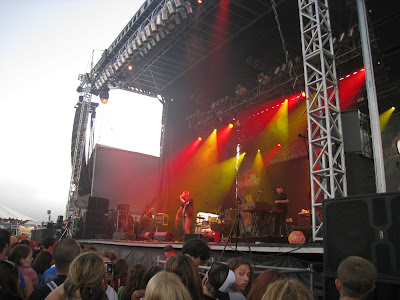 There were four stages at the event, the Main one, a Reggae one, a Kids one, and another just smaller main one. After a quick bite and a bunch of sips, we watched a band I'd never yet heard of, Rey Fresco. They're a singer, a bassist, a drummer and a Harpist. Yes, a harpist, and that's what caught my ear. I feel like I might have coined a new phrase that night, when I said, "I really liked the Hip Harp outfit we heard." And I really did. It sounded super different, classical and real cool at the same time. These Ventura guys will be heard from a lot more, I think.

We wandered around a bit, hearing Schwayze and Quasar from a distance, mingled with the Noozhawk folks a bit, and then I ran into my good pal, Tom Freund, who slapped a backstage sticker on me, and off we went to say hi to Mr. Harper right before his set. This was to be my first time seeing Ben with his new band, The Relentless 7, and I was stoked. I think he was too, judging from the anticipation and excitement backstage. Ben was wearing a "Burn To Shine" Amish-y hat, and looked like he meant business.

I have to admit I was chatting a bit seeing people I knew and missed what the first song was, but the first one I heard (from the side of the stage, with bliss) was my favorite from the newish Ben Harper and The Relentless 7 album, "White Lies For Dark Times" called "Shimmer and Shine". That has pretty much been my theme for '09 (Shimmer and Shine in '09!), so it was great to rock out to it live. 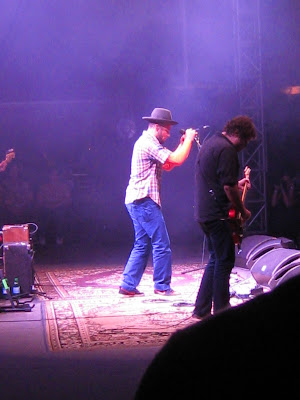 Santa Barbara loves them some Ben Harper (who doesn't, really?) and they were INTO it. Especially when Ben next sat down to play his distinctive Weissenborn, for a new song called "Rock and Roll Is Free If You Want It". It was a harder rocker, as most of the songs are with this new band, and yet had a catchy hook like old-school Burn One Down Ben too. Tom Freund and I got into a philosophical discussion after this one. He felt it was a statement song about downloading music, and how it's pretty much free now if you want it. I felt it was more how the FEELING of Rock and Roll is free, and really isn't about money at all, so it's FREE, like Freedom. Ben? Feel free to chime in.

Then Gabriel Noel from Tom's band said, "Oh, they just quoted Charles Mingus' II B.S. right there." It's fun when you hang out with musician's musicians and learn stuff like that. We were both talking about how Ben's vocals sound a lot more Hendrixian on the material from this album, when RIGHT then, they merged into Hendrix's "Red House"! The crowd went nuts as soon as they recognized it. The house lights bathed everyone in red and all the sand that had been kicked up all day rose into the air like smoke, and it really felt like the guys onstage were BURNING THE PLACE DOWN! It was honestly the greatest. One of those moments where you wouldn't rather be ANYWHERE else.

Next up was "Skin Thin", with Ben switching to acoustic guitar. Excellent. They followed that up with the extra-inspiring "Fly One Time", which I love. It has a great video (http://vids.myspace.com/index.cfm?fuseaction=vids.individual&videoid=60569984) full of extreme sports people - so inspiring must be what they were going for, and it worked. "Keep It Together (So I Can Fall Apart)" featured a little call and response with the crowd, who would've yelled back anything at this point, but this time it was "TALKING TO A WALL!" that they screamed, proving that Ben was not.

It has to be said that Jordan Richardson, the drummer, is an animal. Like I hope his friends buy him that Muppet, Animal, things. He is a treat to watch. I love it when people are madly into what they're doing, and he certainly is. Jesse Ingalls on Bass, and Jason Mazersky on rhythm guitar tore it up too, but that Jordan was hard-core. As they were firmly holding things down, Ben picked up the tambourine for the next one, "Boots Like These." It goes, "You gotta live my life to get boots like these", and I'm positive everyone in the house would be fine with that. That was the last song of the regular set, and the crowd was not having it. They whistled and screamed and kicked up more sand (well, that was just me, but I saw others doing same), and were rewarded with a solo Ben coming back out with his acoustic guitar. He strummed the opening chords to "Walk Away" and the place went bonkers. This was an audience that knew every word to the old jams, and they were thrilled, hugging their friends and singing along. 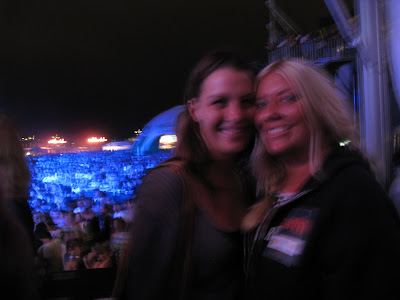 That vibe continued for the 12-String loveliness of "Roses From My Friends", that people felt to their souls, because Ben clearly did. It was that feeling of WHY you go to shows. Nostalgia, closeness, that we're all in it together with our friends. There wasn't much time to relish the slow-jams though, as Relentless 7 was back for the show-closer, "Up To You Now". The entire band went OFF for this one - no one more than Ben, who screamed the last note so long and loud I'm a bit concerned for his larynx today. He knocked over the mike stand, he knocked off his hat, and ended the night, thanking everyone from his knees. It was BadASS.

So said me, but so said everyone stomping out through the sand, from the teen boys who excitedly told their friends how they got in by digging a hole in the sand under a fence (clever!), to little tiny kids still bouncing atop their parent's shoulders, to my friends, slapping me five over how FANTASTIC everything worked out.

Daddy Edgar picked us up, and we decided to get back on the road to Venice that night vs. go to After-Parties and stay over. We wanted to have a full sunshine Sunday back home, and it was the music still reverberating in our heads that gave us the momentum to do so. I still feel all pumped up from it, in fact, and offer thanks to everyone involved in such a stellar Saturday. Especially you, Ben. Geez.
Posted by CJ Gronner at 2:06 PM