Tamara's Tamale - Tamales For Everyone!

Happy International Women's Day, Ladies (and the Gentlemen who love us)!

Tamara's Tamale first came on to my radar a bunch of years ago when the Free Venice Beachhead was hosting a celebration for International Women's Day, when so many people came that they ran out of food. Tamara's Tamale swooped in to the rescue, donating dozens and dozens of the Westside's best tamales and making a whole bunch of Venetians happy. 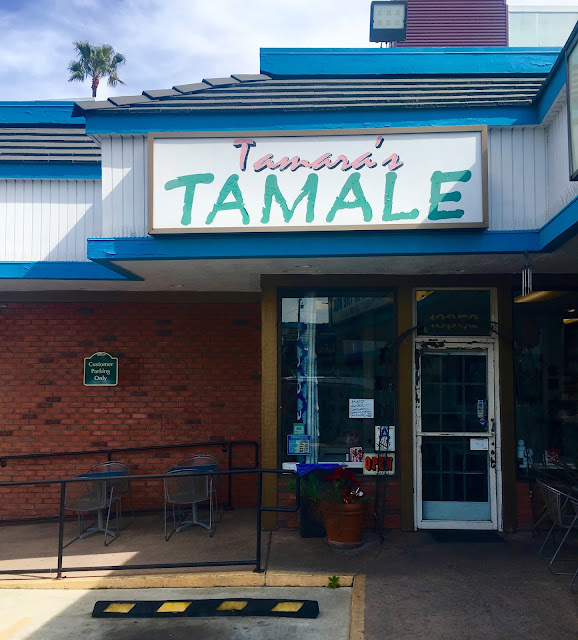 I've been wanting to know the story behind Tamara's Tamale ever since, so thought when better to do a feature on a women owned and operated business from a born and raised Venice girl than for this year's International Women's Day (even though I think every day should be Everyone Day)? Thankfully, Tamara Tapp agreed, and we sat down for a nice chat in one of her rare quiet moments at her restaurant in a tiny strip mall with Sakura House, Celadon, etc ... on Washington Boulevard. 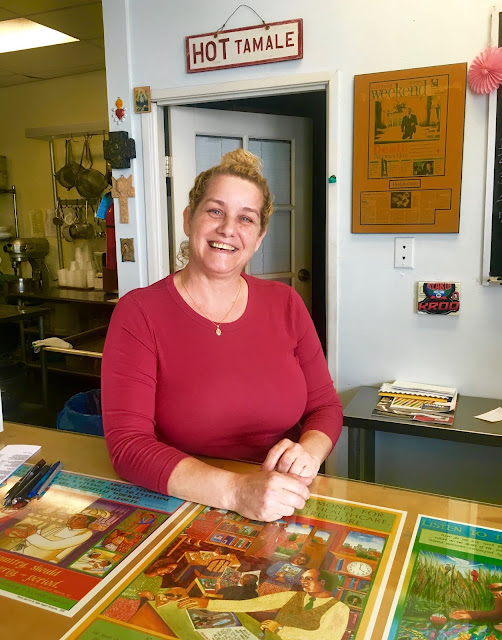 Tapp is a native Californian, and has spent her whole life in and around Venice. As a teenager, she waited tables at various classic Venice restaurants like Hama Sushi and Maxwell's, and also worked at Conroy's Flowers (at the location that is now Deus Ex Machina). Tapp's family is from Mexico (Sinaloa and Chihuahua) and their main family tradition in cooking was always making tamales together.  Alice Guadalupe Tapp is Tamara's mother, and the author of two books on tamales, Tamales 101 and Fast & Delicious, so she knows what she's talking about. Alice Tapp finally said one day to Tamara, "Let's do something" - meaning with tamales - and after a brief search, they found their spot on Washington, and have been open for business in the same location for 27 years now. 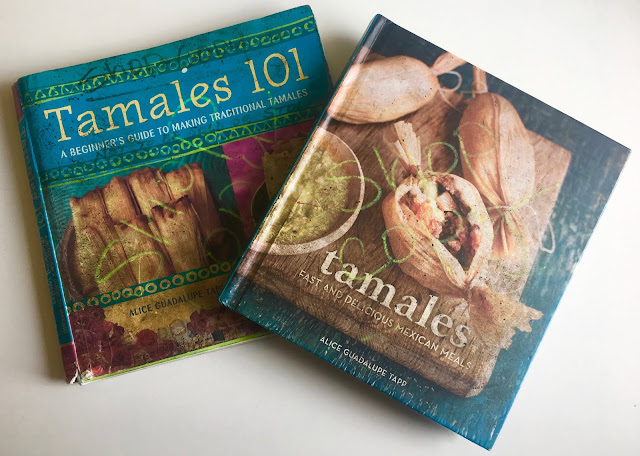 "It's really taken on a life of its own ... It's really hard work, but I do love it. We love our community and it feels so good to give something from our family's tradition back to our neighborhood. Everyone is welcome here, there's something for everyone, and I love people to come and sit and talk and love food together," explains Tapp. "We get new people every day. After 27 years, people are still discovering us." I know this to be true because someone at Christmas time (their busiest time of the year, when business quadruples) was on Facebook asking where to get good tamales on the Westside, and I chimed in with "Tamara's Tamales, of course!" - which several responders had never heard of. Until then.

"I get a lot of Costco people - especially the tire guys - and a lot of people stop in on the way to or from the airport." - both to bring an edible souvenir back home, and as their first stop when they land in town. Business has grown each year, but as Tapp does everything herself with a small staff - the shopping, the cooking, all of it - she can only do so much. They make up to 10,000 tamales each week at the high season, and could easily sell 50,000 - "I just do what I can do". And that's a lot, as in addition to all the tamale making, they donate to two events a month, preferably for organizations and events dealing with kids, women, and mental health. There are volumes of photo albums containing all of the thank you letters and honors from the many various groups Tamara's Tamale has helped in the community. It's a lot.

There are 25 kinds of tamales available each day, with the most popular ones also being Tapp's favorites - the red pork chili for savory and the pineapple raisin for sweet. There are seasonal dessert ones, like lemon in the summer and pumpkin in the fall, and a special "Family Chicken" one at Christmas. There are vegetarian and vegan options, and even a King Crab one that needs to be eaten by me asap. All are extra authentic, all are extra delicious, all are made with love that you can taste. 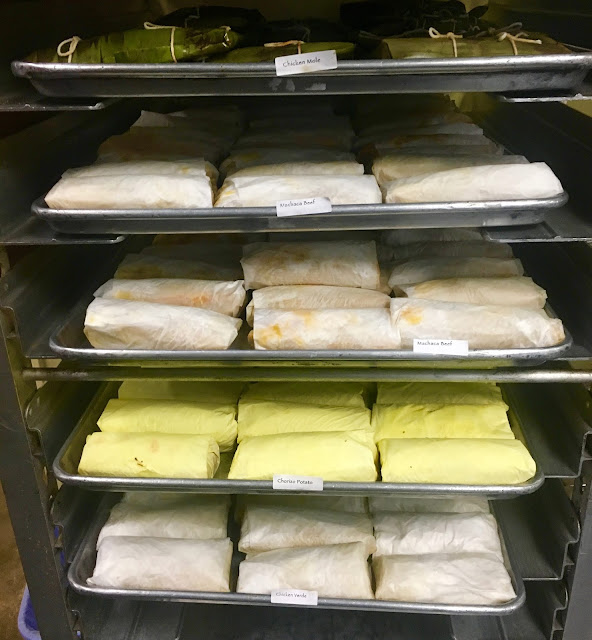 Tapp has done all the food shows, and no less than Wolfgang Puck wrote the blurb for her Mother's books, calling them "The best tamales in the world!" High praise, indeed. "I want to offer a healthy alternative to people in my community that is still fast to get. There are less and less Mom and Pop (or Mom and Daughter) places like this, so I think that people really appreciate it, from the feedback that we get." About that change happening all around, Tapp says that as a native, the change hurts. But as a business, it's good. "I just want to make the best tamale every day. I love tamales. I try them everywhere. If I see a lady on the side of the road, I pull over to try hers. People bring ME tamales from their families to try ... I just love tamale." And proof of that love is in the pudding - or tamale.

People ask for special orders, so Tapp has found herself making a jalapeño and cheese or a nutella and banana for those with special cravings. Tapp herself has two daughters, who both went to Couer D'Alene Elementary, and have grown up helping in the shop. Both are now pursuing other career avenues, so it's pretty much all Tapp - and that caused her to cut back on hours finally, after being open 10-10 every day for years. Tamara's Tamales is now closed Mondays and closes at 6 pm, and they close for the entire month of January so everyone can have a life after the back-breaking work of the holiday season. 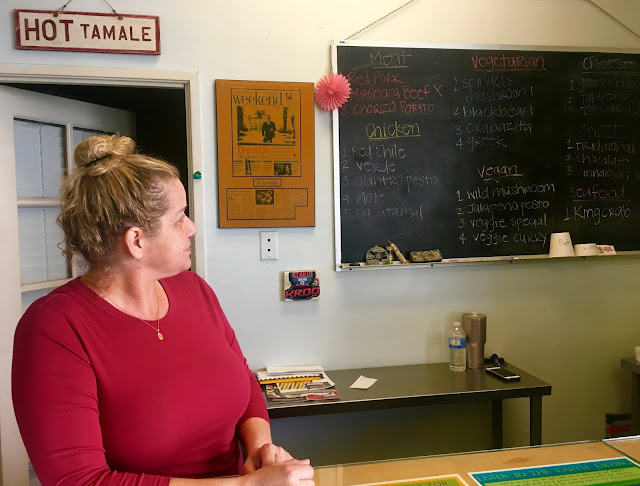 As much as Tamara loves tamale, "I love a taco!" She gets her taco fix at El Abajeño on Inglewood Boulevard (which I'd never heard of so am now looking into that!), is obsessed with Rainbow Acres, and thinks that Venice is in dire need of some good Chinese food after the closing of Szechuan on Washington Boulevard (agreed). Tapp is also a big fan of sushi, and credits the orignal owner of Hama - Toshi, who now owns Hyama Sushi on Sawtelle - for teaching her a lot about the restaurant business. There is a big community within restaurants, and Tapp has friends at nearly every place in town, peppering our conversation with comments like, "Oh, Karen from Café Buna is my friend from elementary school!" ... giving her a street cred borne from a lifetime in Venice. 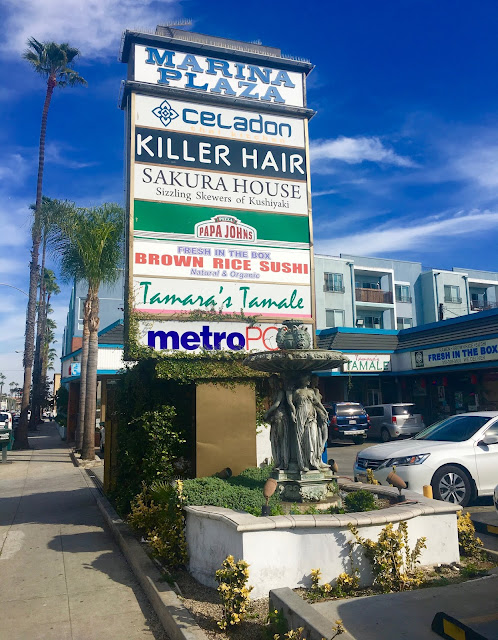 Tapp and her family have given a lot to our community over the years and decades, and I raise my glass to them in thanks on this International Womens Day. Women working hard and being dedicated to their communities - and the world at large - truly make it all a better place. Thank you to Tamara and her tamales for sharing their traditions, delicious food, and  love with us all ... Viva Tamara's Tamale!