With all the rare rain Southern California has had lately, you knew there was also going to be a rare wildflower Superbloom - and People, it is here! And it's only the beginning ... ! 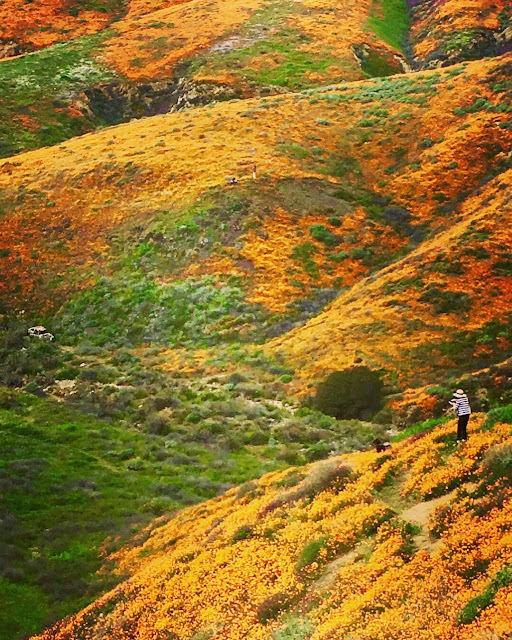 I'm kind of a wildflower dork, and I'll go way out of my way to see a natural phenomenon - and so will my brother, Paul (Also an awesome nature photographer, so I'm double lucky), so a day trip was planned for a Sunday drive to Lake Elsinore, where I'd read was the spot of the moment ... and I had read correctly! You can see the flower covered mountains right from the 15 Freeway, and sure enough, the closer we got, the more backed up traffic became. We didn't even care though, because you know what? I'm STOKED that a whole bunch of people still care about nature and will get out there to appreciate it (even if they don't really deserve it, as I'll address shortly). It's special. 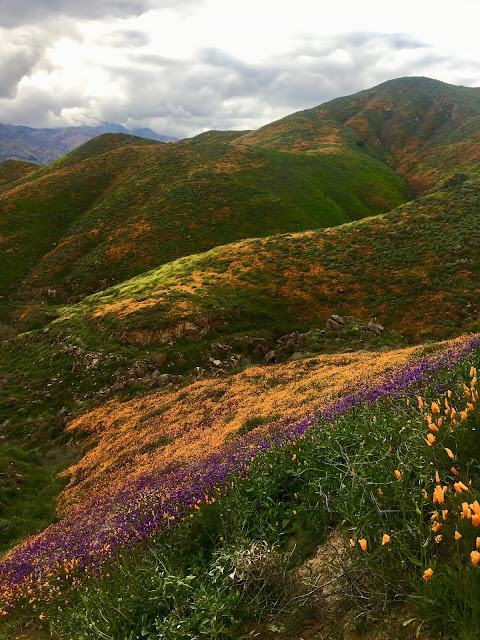 We wanted to really get into it, so we weren't going to settle for snapping shots from the shoulder of the freeway, and waited in the traffic line to find a parking spot at the trail head of Walker Canyon. It's not really a true nature park, I don't think, as there is no one around handling things. A couple Port-A- Pottys have been brought out to handle the huge influx of visitors to little Lake Elsinore, and there was an ice cream truck smart guy there, but that was it. The hills were crawling with nature lovers, but the higher up and deeper in we went, the more space to explore and photograph this natural wonder we had. It was truly spectacular, and THE most impressive wildflower display I've ever seen in nearly half of my life in California. And the big flower spots haven't even started yet! This is going to be some Spring! 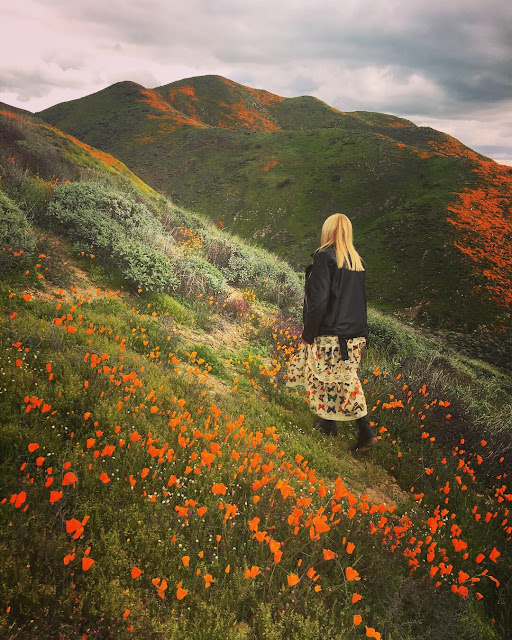 Yesterday was also Daylight Savings first day, so we had extra time to explore the absolutely surreal colors bursting out all over. Some of the trails were pretty steep, and my boots were slippery, so it was adventurous also ... which I dig. Every photo we snapped was impossibly beautiful without doing a thing to it. The bright, almost hunting outfit orange of the state flower California Poppies was dominant in this area, with ridge after ridge exploding in the citrus palette that must be seen to be believed. Purple lupine and some other little tiny purple ones were also everywhere, with yellow and white blooms for contrast ... and it was all simply breathtaking. In one case it really WAS breath-taking, as both my brother and I got lightheaded when standing up. One of our new flower friends from the trail gave us a banana, and we realized we didn't really eat in our haste to get to the beauty. There are still good people, People! 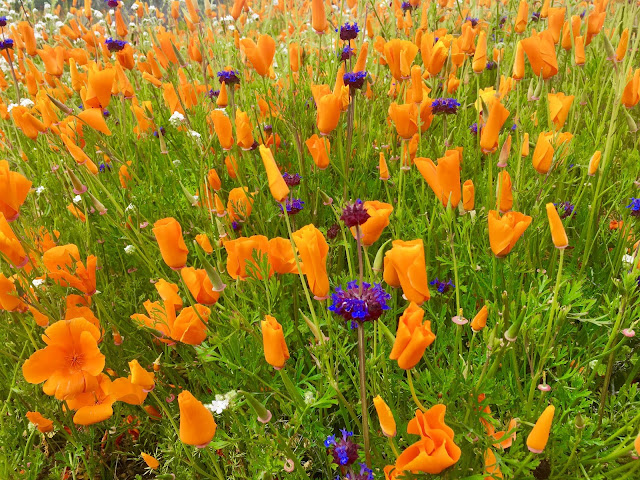 There are also idiot people, and it must be addressed that several idiot jerks decided to leave their bright blue plastic dog waste bags along the trails - just thrown there to mar the total majesty that we were witnessing. Had I seen it in action there would have been words - which no one wants on such a beautiful day, but ARE YOU KIDDING ME?!?! Let this be a warning. 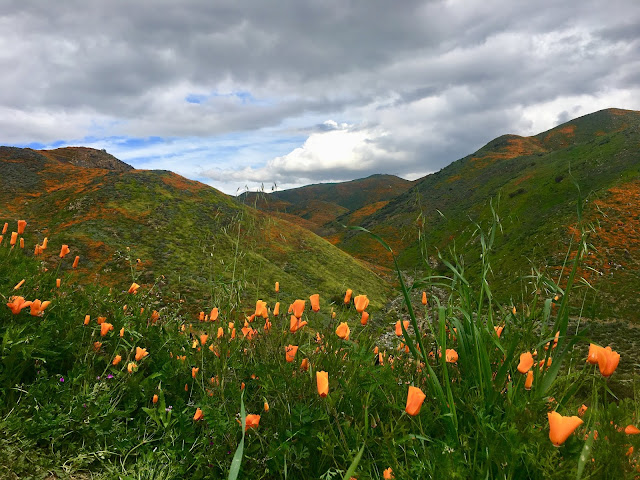 I also saw several seemingly clueless parents thinking it was adorable to let their kids pull the flowers to make little bouquets - literally teaching their kids to vandalize nature. I'd be like "Um, you know, I don't think you're supposed to be picking the flowers" (because I couldn't help it), and I'd be met with a look like I was the obnoxious one. Wow. O.K. There are no rangers or anyone enforcing anything, so it is a bit of a free for all, and you have to hope people get it by now, but nope. Maybe someone will read this and be like, "Oh, we're jerks" ... but I don't hold out much hope for these clueless, selfish sorts ... or now their kids. Blah. 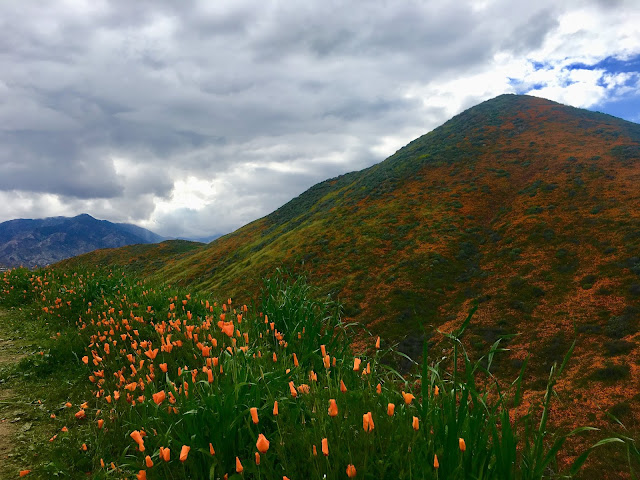 ANYway, you can't let a few bad apples spoil a glorious day, and it was a real joy to see all the elated faces everywhere. Families taking their Christmas photos. People getting engaged, and married! Babies laughing. Senior Year photos. Many, many international visitors (I'd say the majority. Flower love worldwide!). Old couples holding hands and canes to get up the hill. I saw so many people taking selfies that I had to intervene and offer to take a real photo several times ... it was worth it to know that this beauty would be seen in its glory ... and maybe then the world will care more about taking care of it ... Maybe? 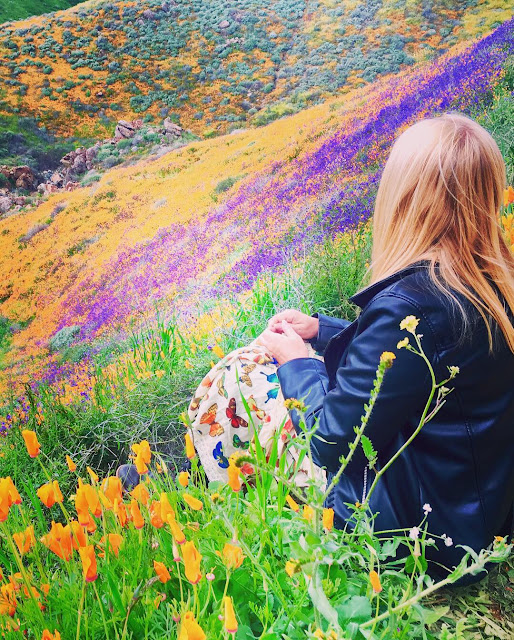 The sunshine came in and out so it was kind of a moody lighting deal for serious photographers, but my little phone camera took all of these, so it was obviously hard to take a bad photo. I can't wait to see my brother's real camera photos (though I'll have to - he's a perfectionist)! There is going to be serious nature photography coming at people all Spring long, if these hillsides keep this up ... we were honestly going "WOW!" "LOOK!" "Oh my goodness!" and just gasping aloud all afternoon long. Everyone is saying "The Hills are alive!" - and we actually were compelled to sing that song out loud. Had to. "Climb Every Mountain" too, as it felt like we did. People seeing our posts aren't even believing it's real, but I assure you, it is. Between our unreal sunsets, ocean waves, and these wildflower blooms, it really is a big reason why we continue to love and live in California, despite the real hardship it often takes to do so. Beauty prevails. 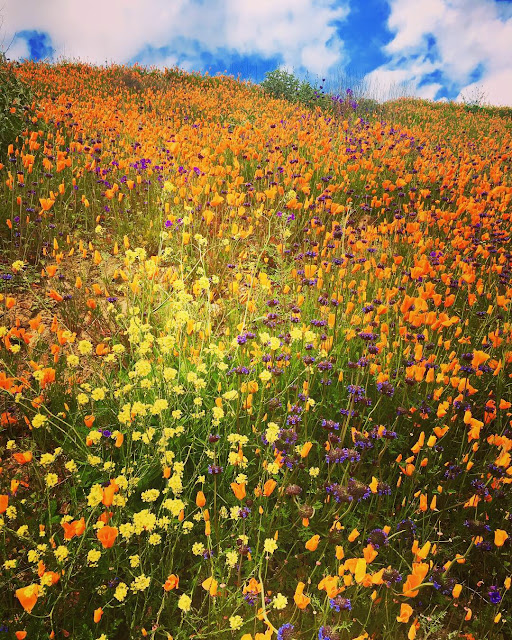 I'm so looking forward to exploring the other flower fields as their blooms open up and give us reason to rejoice, and remember that THIS is what should be important. All the people climbing those hills yesterday are better for it today, and so is everyone who sees their photos, and knows that this kind of natural beauty still exists. The smiles on everyone's faces said it all ... and it was free, nothing but time and energy spent. The Earth was free to do what it naturally does. WE were free to roam and ramble on.

Someone told me there's a girl out there, with love in her eyes and flowers in her hair ... 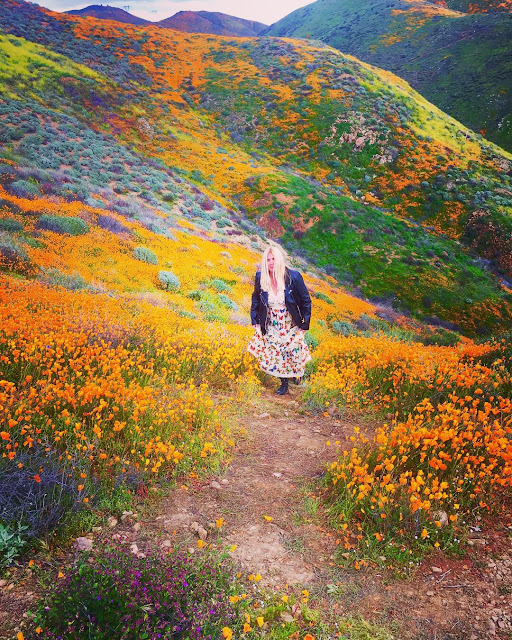 I heard that beautiful and classic Zeppelin song  when I was a little girl, and I knew in my heart that I would live here someday. Now I've spent almost half of my life here in California, and yesterday I felt exactly like the girl in the song. I hope you'll get to feel that too (or what the guy that was appreciating her felt)  ... while it lasts. Going To California!

*Thanks to Paul Gronner for snapping photos and Perle Mer for my butterfly dress!