You can't go very far in Venice without seeing someone wearing something with "Hecho En Venice" on it, and that clothing brand starts with Oscar Galan. I've wanted to know this story for a long time, so I called him up and we made plans to meet at his "office" - which was the tailgate of his truck parked in front of Hinano's. We sat and chatted in the sunshine as a constant stream of friends went by shouting greetings and stopping for a handshake, and I saw firsthand just how much a part of Venice this cool cat is. Galan was born in El Salvador, but his family with six kids came to Venice in 1979 for a better life. He attended Venice High, where he fell asleep in class a lot due to a dish washing gig his brother got for him, keeping him up late. Whenever he wasn't working, he was hanging out at the Breakwater, learning to surf. One day a local asked him to fight him for being a kook, and Galan shrugged and said "Sure". His confidence probably prevented that brawl, and gained him the respect of those locals who then deemed him to be cool (and still do). 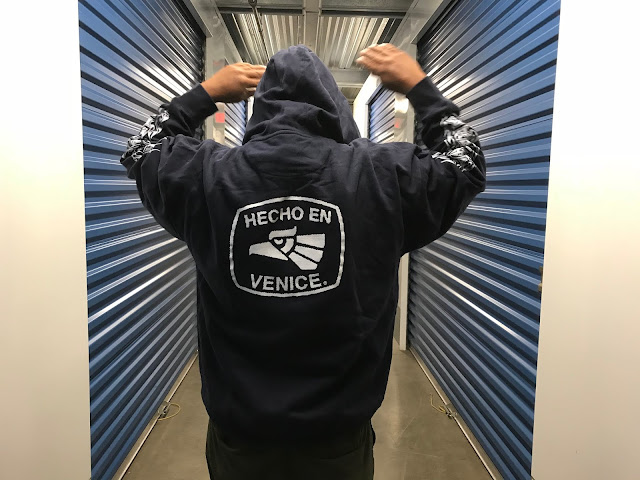 Circle Skate (now what was Subway by Windward Avenue) hired Galan to work at the skate shop, and after a while of owing him money, the owners gave him the shop instead - complete with their inventory - as they wanted to hang it up. The name was changed to "Venice Extreme" (then "Venice Breakwater") and it became a hangout in its own right, where local kids learned to surf and skate and hang out with those kinds of dudes vs. the gangs. Galan moved the shop across the street to what is now the poké spot under the Venice sign, and all the while kept working at restaurants, now as a chef (which he still does in addition to running his own business!). 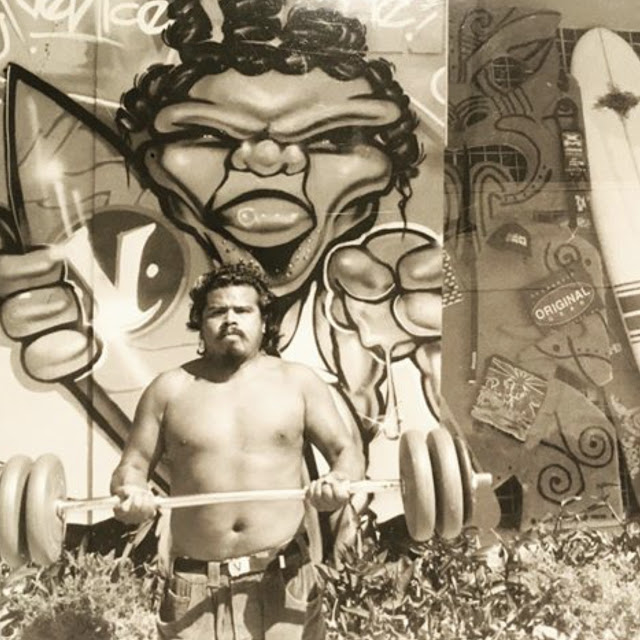 While working at the Venice Breakwater shop, Galan had spied a girl looking for change for a parking spot out in front of the shop. She wouldn't give him her number, but he went back inside the shop and said, "I'm gonna marry that girl." 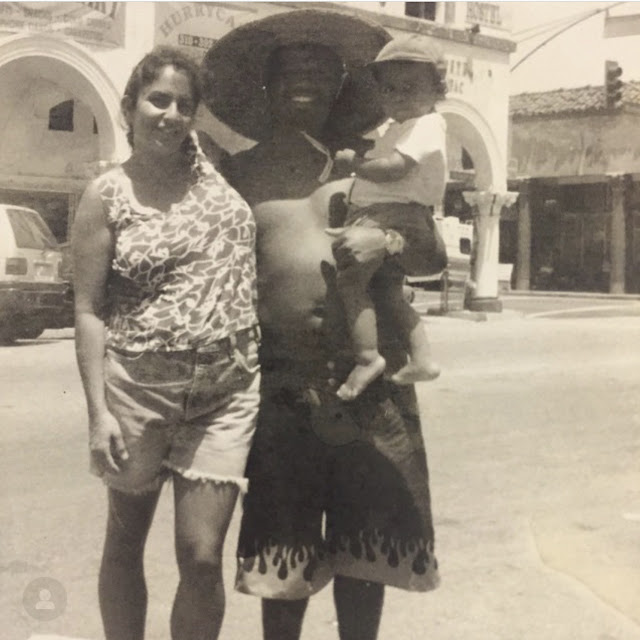 As it goes, once he blew her off, she was interested, and gave him not her number, but her address. And he showed up. That was Galan's wife, Rita, and they've been together ever since (and just finally got hitched last year!). Two sons came along - Isaac and Jason - and soon thereafter, Galan closed the shop. He didn't want to, but he had to cut the overhead, and that was the end of his brick and mortar shop. 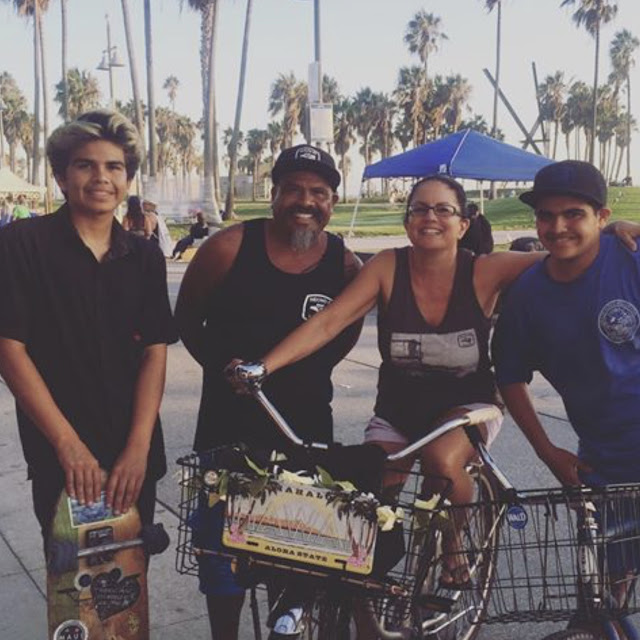 The surf/skate culture was in Galan's blood by now, and when he saw the "Hecho En Mexico" logo, he thought, "Hmmm, I could change that to Venice", and quickly taught himself to sew on YouTube. He created a bunch of shirts and hats with the new "Hecho En Venice" logo, and they've been in hot demand ever since. "I do this for fun," says Galan, and you can tell that he means it. I've always been kind of reluctant to don this apparel, as I was NOT made in Venice, but when I expressed this to Galan, he answered, "I wasn't born here. But I grew up here, and became who I am here." I guess I did too, so now I feel like maybe I can sport these duds. The only thing Galan asks is that you wear the almost always navy blue items with PRIDE. No problem. 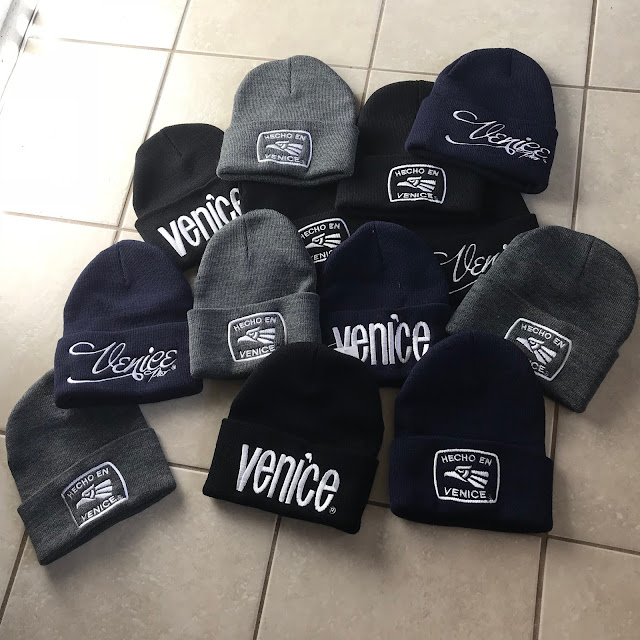 "Real locals that know me get the secret stash. Before it was if you didn't know me, you can't have a t-shirt. Now, everyone knows me, so they can all have a shirt!", laughed Galan. That certainly seems true, as the respect and friendship continued to be shown to Galan the entire time we talked by everyone going by that knew him - and several were already in Hecho En Venice gear. "The people of Venice is what it's all about. Be friendly. Support local businesses." Yeah. For Galan, that also applies to sticking up for people. You may remember the brawl on the pier a few years back between the lifeguard and drunk tourists. Galan had been dining with Rita in Washington Square, and said, "I'll be right back". Those tourists soon found out what it meant to mess with a Venice lifeguard, as Galan came in swinging - and they left hurting. Venice will have your back. 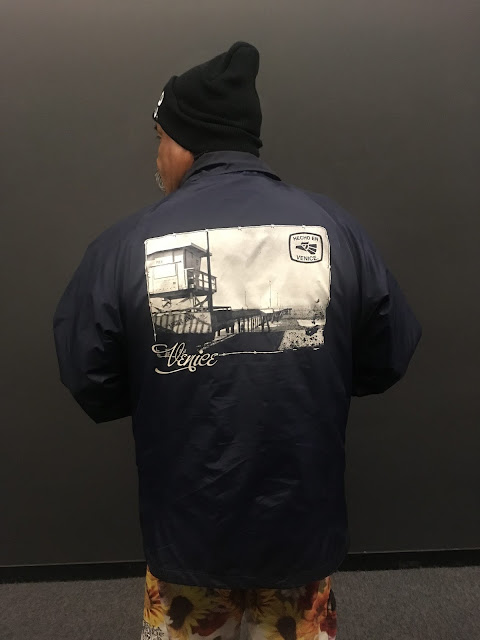 With all the cool stuff in Venice, Galan's favorite thing about it is still "The water. Go surf!" And he's out there all the time. You can find him out in the lineup, having coffee at The Cow's End, or in his truck office. You can find Hecho En Venice all over town, but for sure at Maui & Sons on the Boardwalk, Rider Shack, Titanic, District, Rip City, Bay Street Surf Shop, Principessa, or at their online store, ShackedStore.com. 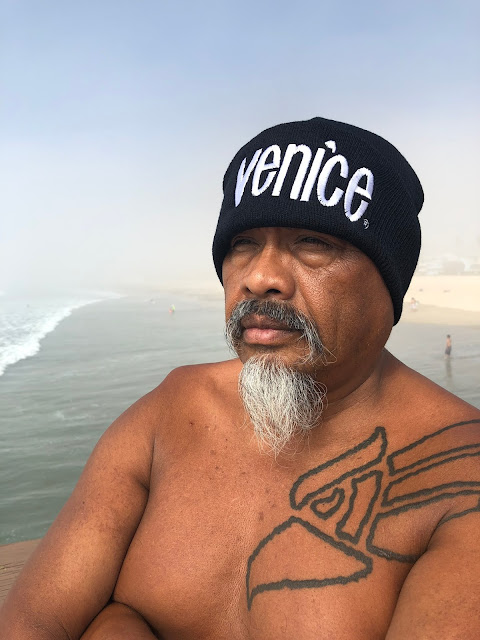 Oscar and Rita Galan are the real deal, and it's an honor to know them, and now their story. Their Hecho En Venice line (now including everything from shirts to hats to coffee mugs!) have given all of Venice a way to show their pride - worldwide. Get yours!

*All photos (after the first one) are courtesy of the Galan family.