Beyond The Streets To The Venice Pavilion - Welcome 2 Venice!

One of the best parties ever was held last Sunday at the Beyond The Streets art exhibit in downtown L.A. ... but it was exactly like Venice, only not in Venice. A recreation of the Venice Pavilion had been constructed using old photographs to get it as real as possible, and they did an awesome job. I showed someone photos the next day, and they were like "Whoa. It's exactly the same, but cleaner." Yep. It was like a time machine landed us right back in '90's Venice, complete with almost all of the same people too. It was one of the best Summer kick-off parties ever, hosted by our excellent friends at Juice Magazine. 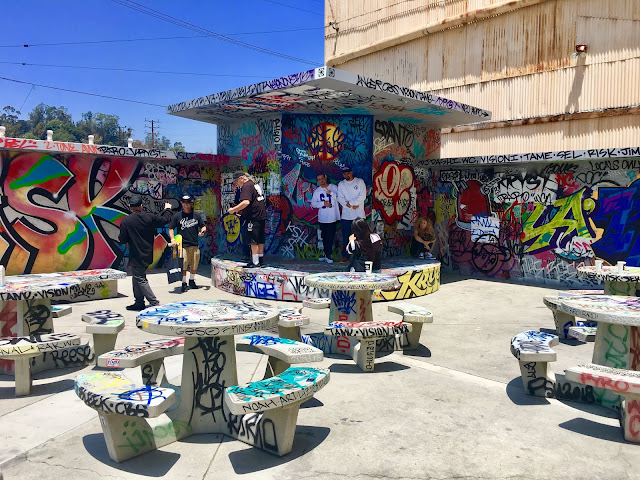 Juice had a party the night before, so it really was a proper Dogtown Memorial Weekend - and one for the books. It was a hot, sunny day downtown, and folks were in the mood to let loose. There was free beer and food to help with that, and art and skating enough to satisfy even the most hardcore. 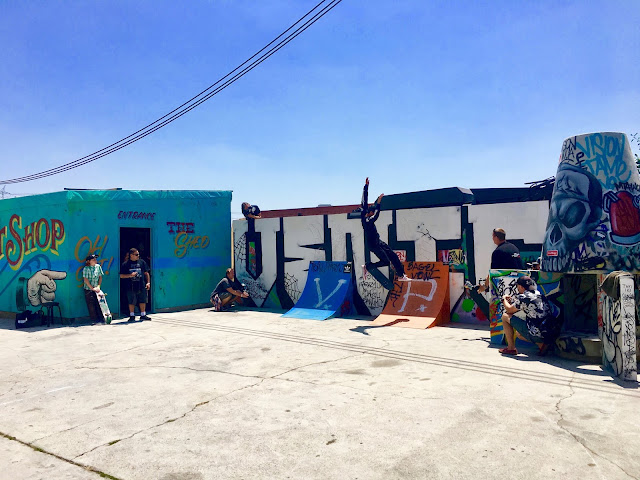 Old friends caught up all day, and new friends were made. There were some people I hadn't seen pretty much since the Pavilion was bulldozed over in 2000, and some that I'd seen just the night before, and everyone agreed that it was the most awesome thing every to all be back together in the Pit ... even if it was a fake one, it was as real a time as we've all had in a long while. 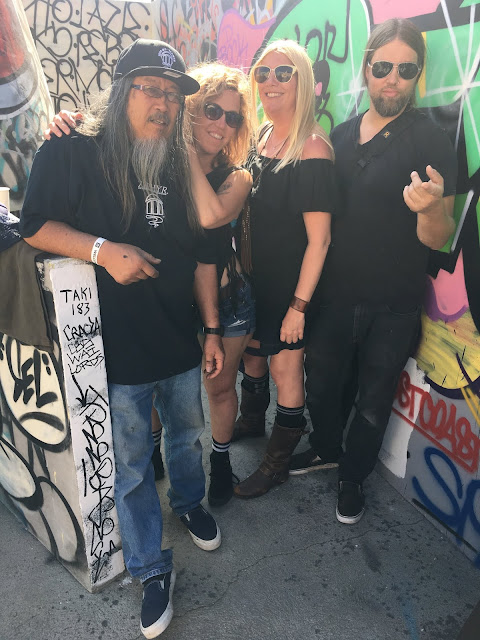 Josh "Bagel" Klassman had the best birthday party ever, as this jam fell on his day, and was also the release of a book of his photographs that Adidas Skateboarding put together (perhaps in a bit of penance for their earlier claim that they were "Defining Venice". No, THIS kind of day helps define Venice.), called It Wuz All A Beautiful Disaster. And it truly was. 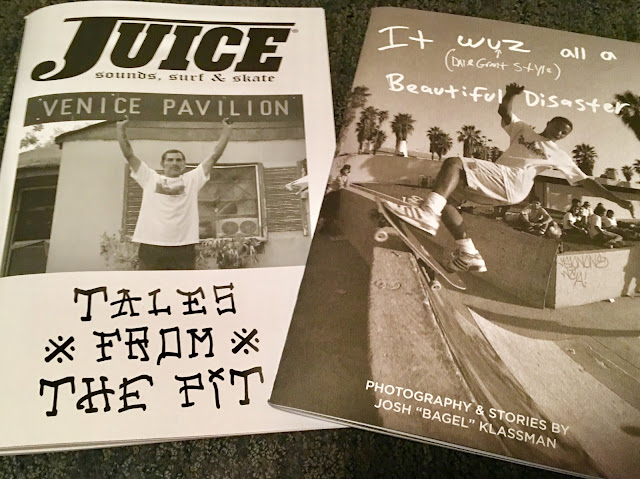 This day wasn't, however. It was the best. A punk rocking set from The Shrine (a new favorite band now featuring Corey Parks from Nashville Pussy on bass!), and an even harder one from Excel set the tone and created a pit of skateboarding moshers. Super extra fun, and everyone just felt happy to be there (though like the old days, someone did have to be taken away in an ambulance - then the party went right back to raging after wishing him well). Metallica's Robert Trujillo was there mixing and mingling, and you name a skate hero and they were probably there. 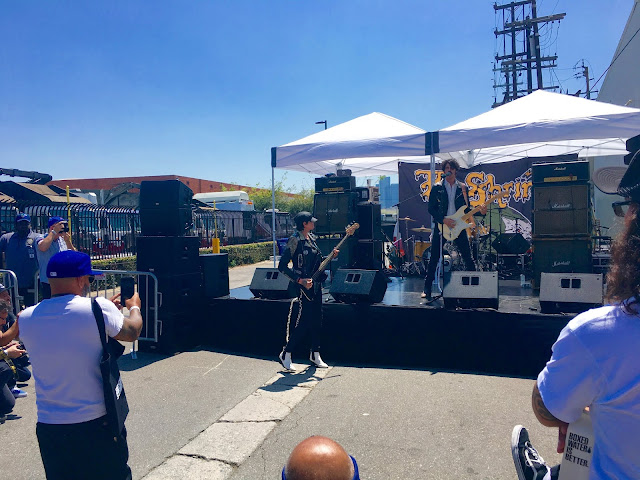 Juice Dan was the M.C. for the day, and Juice Terri held down the Juice booth, and both accepted lots of love all day for the support and love they've given the skate community, Venice and international. 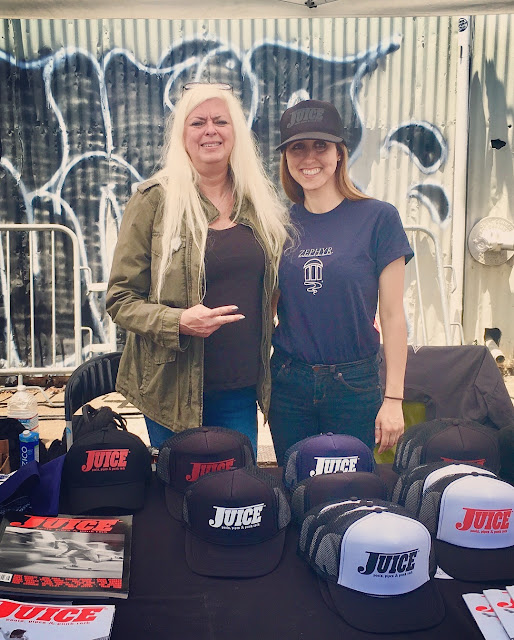 Skating was front and center, and you got wall rides from Christian Hosoi, Tuma Britton, Bennet Harada, and all the O.G. cats that gave Venice its name in skating. Everyone was tripping all day on how weird (and cool at the same time) to have picked up the Pavilion and transported it to a parking lot in downtown L.A. ... though an ocean breeze would have been most welcome. Maybe we can keep it and bring it back home? (Though I'm hearing a low buzz about unearthing the original again ... why not?) 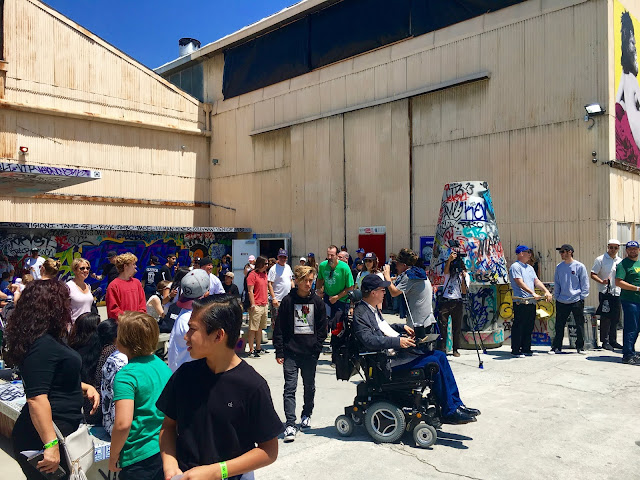 Though the Pavilion pop-up was the place to be, there was also ridiculously sick art inside to be seen at the Beyond The Streets extravaganza back inside - and get yourself a little break from the relentless sun. Celebrating street art in all its forms - and beyond - the cavernous warehouse had room after room of mind-blowing art from legends of the genre, beautifully curated by graffiti historian, Roger Gastman. 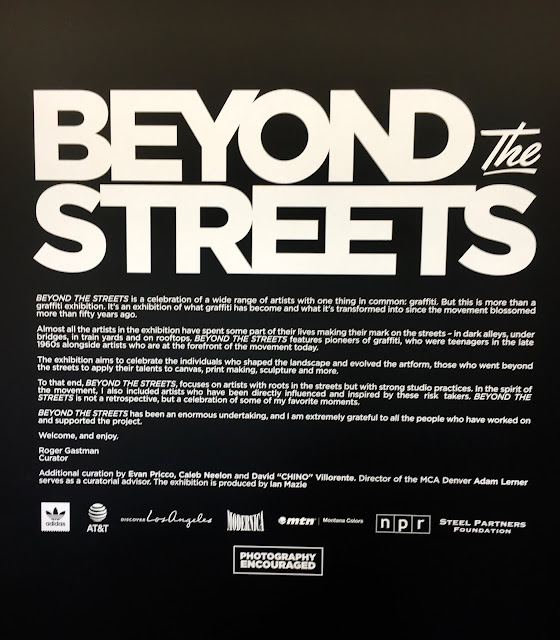 The show opens with an entire wall of spray paint cans, illustrating the importance of this material in street art's history. 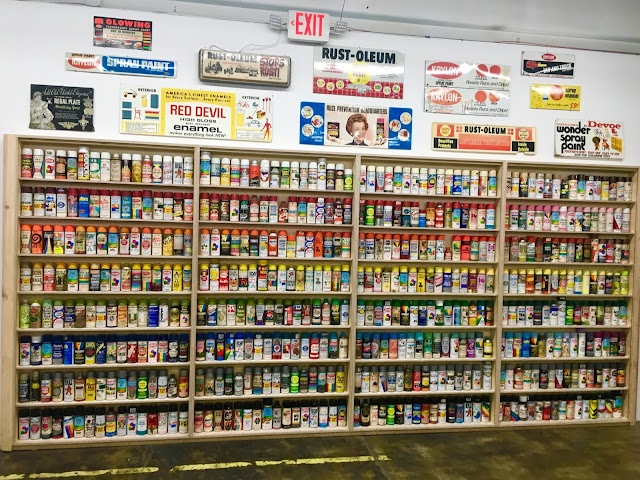 There was a "Cosmic Cavern" of all glow in the dark colors, that would have been fun to hang out in a bit while altered. Grooovy. 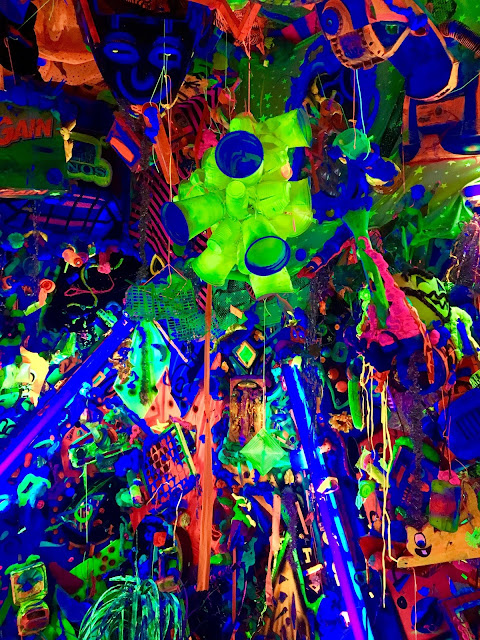 There was a room dedicated to the female street artists, repped largely by the Guerrilla Girls. 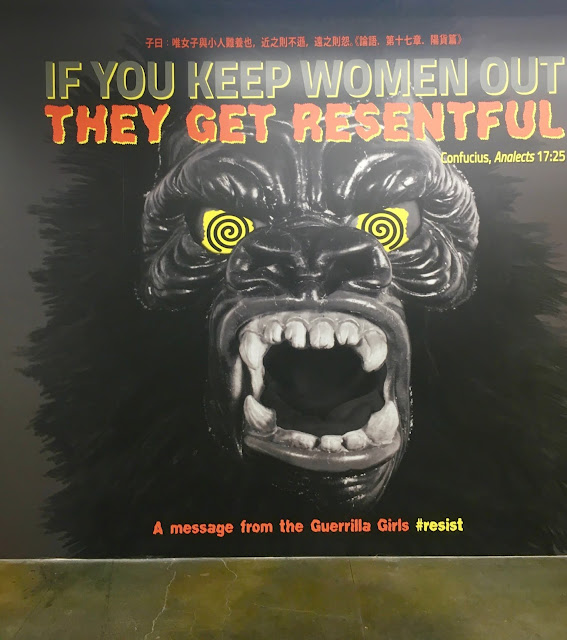 There were old school works by Basquiat, Keith Haring, Chaz Bojórquez, and Kilroy! ... all the way up to the latest stuff from the latest artists like ... you name it. 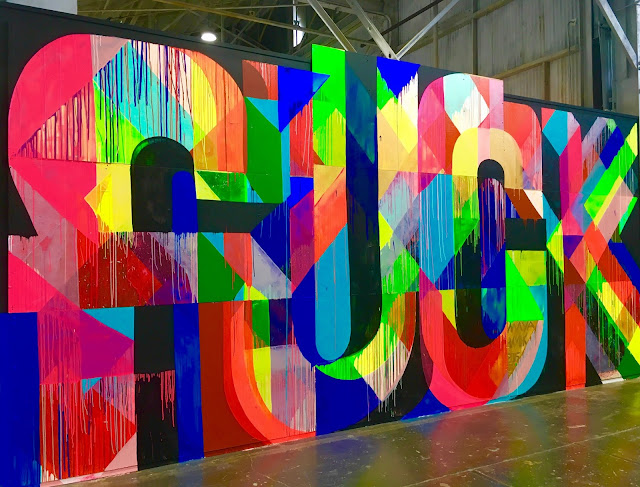 I loved an old man by Swoon (and I always swoon for Swoon) ... 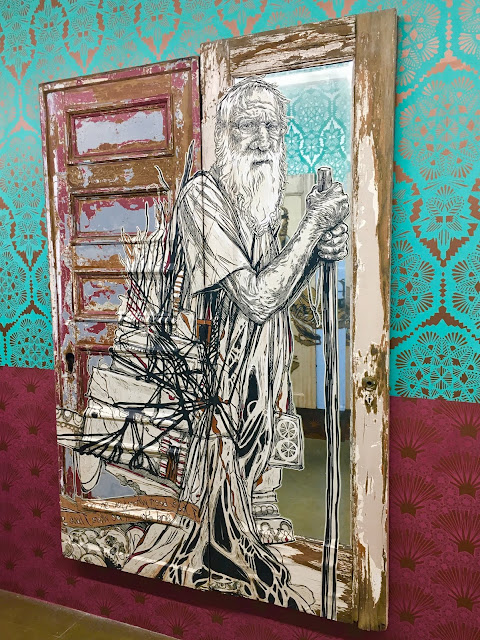 Shepard Fairey work always has to be in this conversation, and his Andre The Giant pieces were well represented. 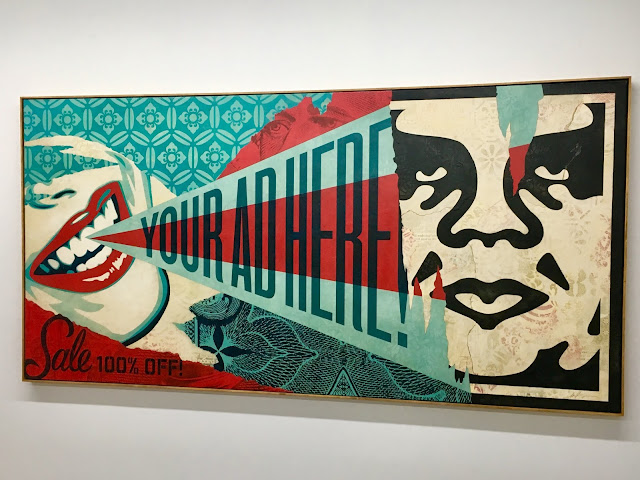 Slick showed up with his L.A. Hands, showing off Southern California in a nutshell. 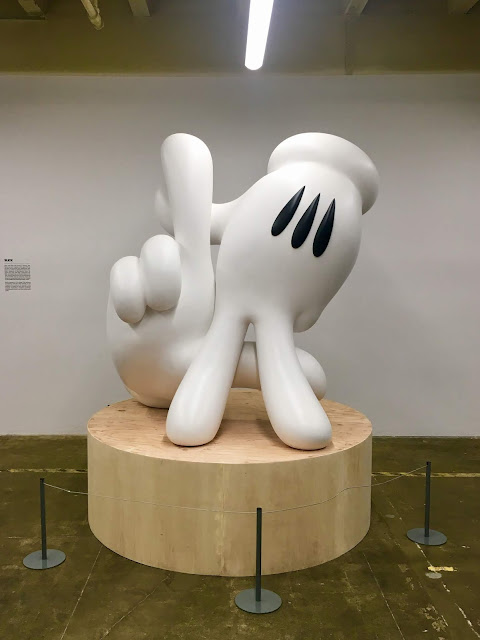 Famed tattoo artist Mr. Cartoon created a funeral home installation insisting that "All Dawgs Go To Heaven". I sure hope so. 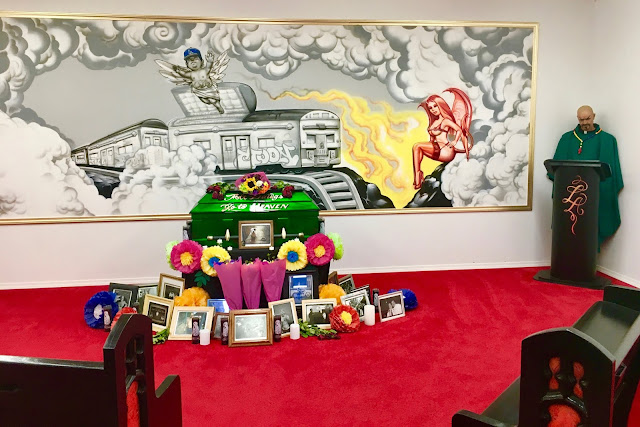 All souls need saving, some more than others ... 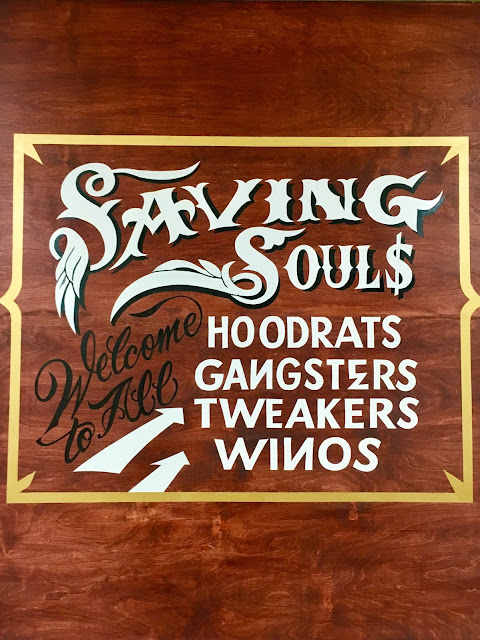 Another installation that was one of the heavier ones showed a bomb aimed at a wall of condoms, and when you looked inside of the bomb, it had a drive-in theater full of cars watching the world explode. It was as cool as it was gnarly. 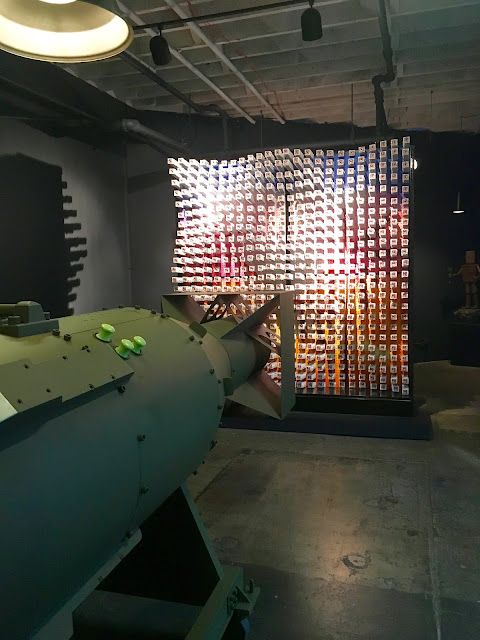 The space was HUGE, and so were some of the pieces. The scale is not just beyond the streets, it's beyond impressive. 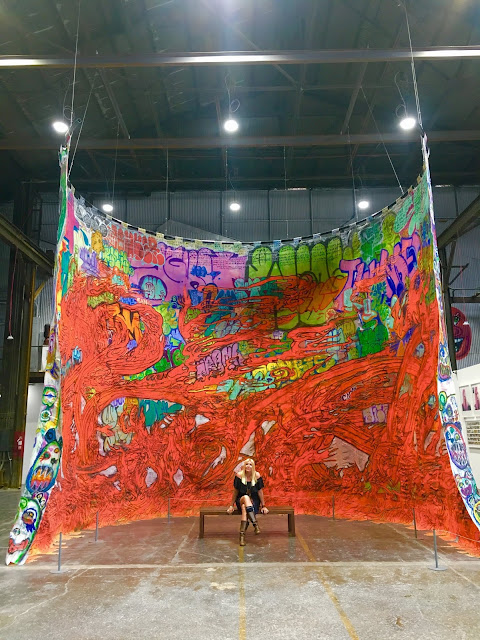 There had to be a C.R. Steckyk III wall, and there was. Topped off by a shark created from license plates. 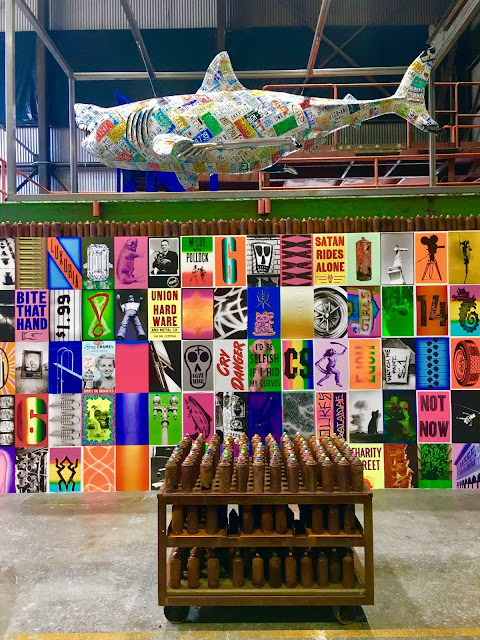 "Trash Records" was an installation that exactly replicated the kind of record store we all know and love ... and miss. 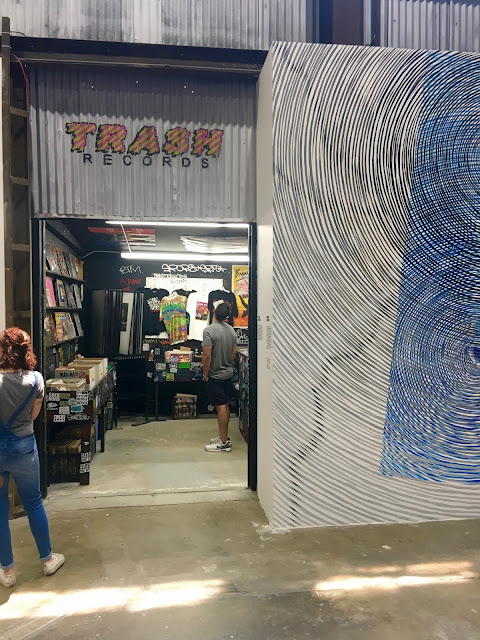 Faile showed up with an enormous mausoleum that would not be out of place in an old European cemetery - or Vegas. 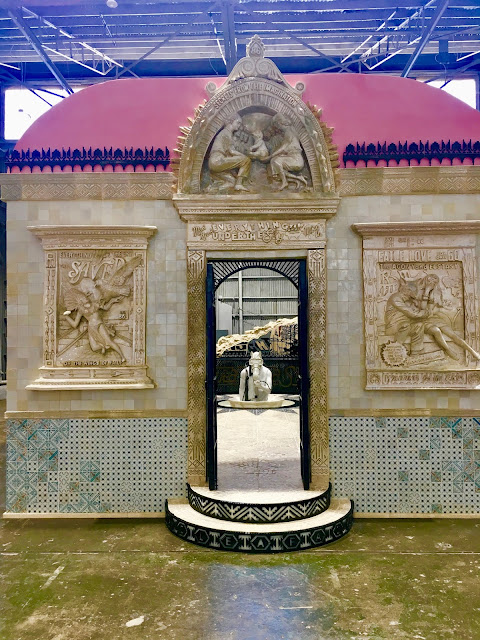 Much like the We Rise show that is located just a couple blocks away (and was just extended through June 10th - GO!), I've shown you a lot here, but I haven't barely scratched the surface with how much there is to see in this show (that goes through July, so get here also!). It's massive - and truly a spectacle to see. 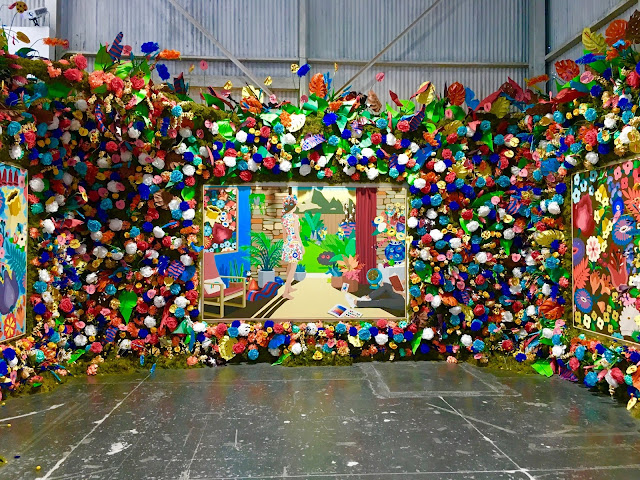 There won't be an awesome Juice party when you go, and that is really what made this event SO special. Sure, it's the art and the skating and the memories and the cool, but what really makes something real is the people that know and love a place. Like the Pavilion. Like Venice itself. 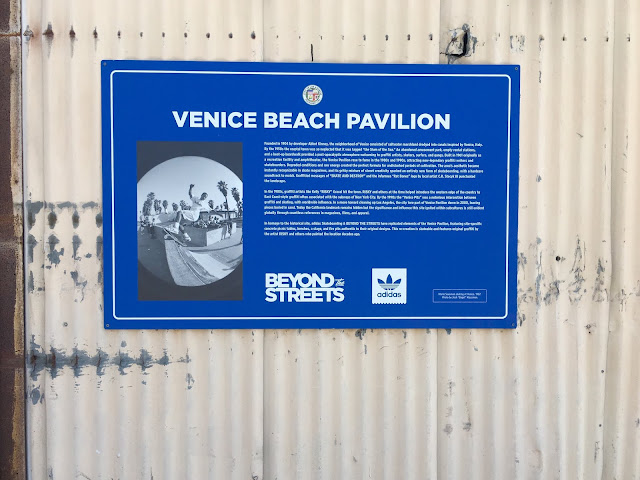 It was an incredible day, with incredible people doing incredible things, and we were all lucky to be there - and we knew it. I think anyone that was there felt a real tug on their heartstrings, and a renewed internal vow to keep Venice real, to keep it special, to keep creating art and music and a new generation of skaters. Deeply heartfelt thanks to everyone involved in such an honestly epic day.