The Venice Art Crawl went down last night, and this time was centered up and down Venice Boulevard, in what I like to call "The Cultural Corridor". This time out was a lot smaller (with the annual Art Walk also happening this weekend, it's a lot), and I'm not mad at that. There's always so much ground to cover that you can never see it all anyway, so this more bite size version was actually pretty user-friendly. I had woken up to the news that the world lost Chris Cornell, so was feeling a bit melancholy, but also very eager to get out and live myself. 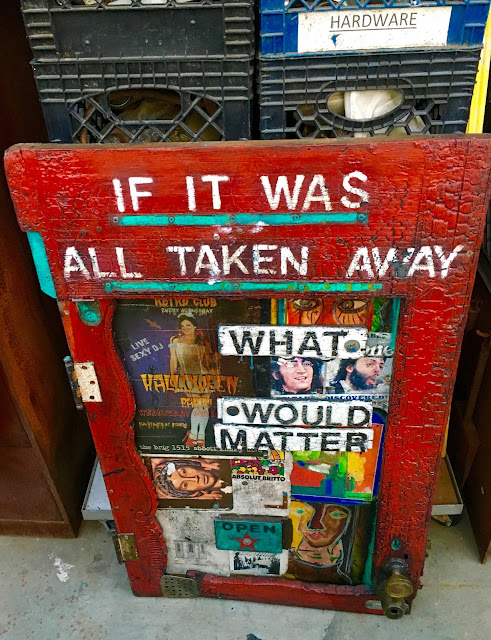 *this piece by Jennifer Verge

We started the evening in the window seats at Wabi Sabi as the sun went down, and it was like looking at art just watching all the people walk by ... and all the girls taking selfies out in front. Wabi Sabi was also a stop on the Art Crawl, so we hit two birds with one stone (and a few glasses of wine got hit as well, if I'm honest). Barbara Lavery had her show Before They Go up on the walls, a series of photos of Venice artists working in their studios - while they still have them. It was poignant, and great, and shone a light on the fact that Venice is really nothing without its artists ... and that's what the Art Crawl is all about. 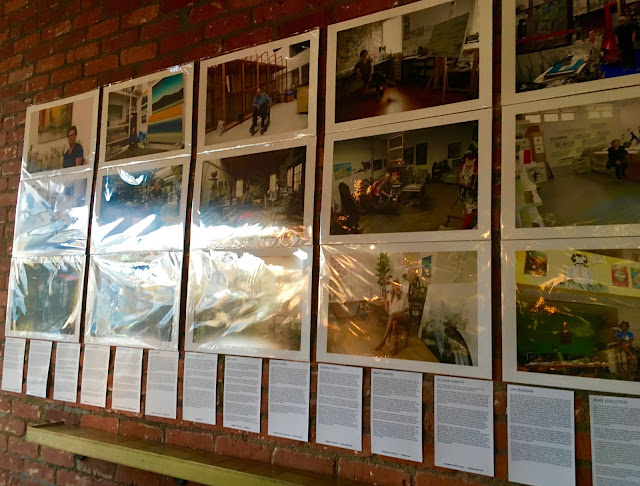 As the daylight waned, we headed over to the Beyond Baroque and SPARC complex to see what was happening, but it appeared to be a big crowd for an AA meeting. We probably could have done with staying and listening, but there was still a lot of art to see. We walked over to the home studio of Flavio Bisciotti, which was nearly totally ruined in a fire last year. Fellow artists came together to do a show comprised of all works done on charred remains of things from the studio.

The "Art From The Ashes" show was a great success, and also incredibly inspiring. Artists coming together to make something new out of the old, and supporting each other through it all. It's a beautiful thing, as are the objects that were created out of it. My favorite was the chandelier made from bits and pieces of wreckage, that came together to be more beautiful than any of it had been before. There's a good lesson in there ... 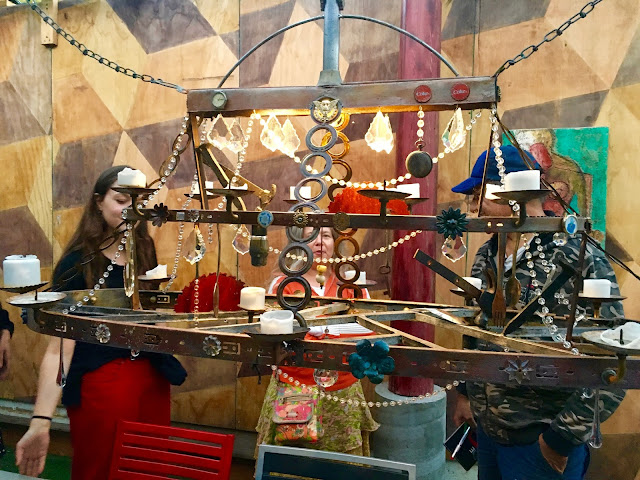 Bisciotti has a wonderful attitude about it all, and appears to be even more inspired himself. He has made chairs that are see through and contain more wreckage, that were very cool, and again, wouldn't have happened without that awful fire. This man has truly become the phoenix. 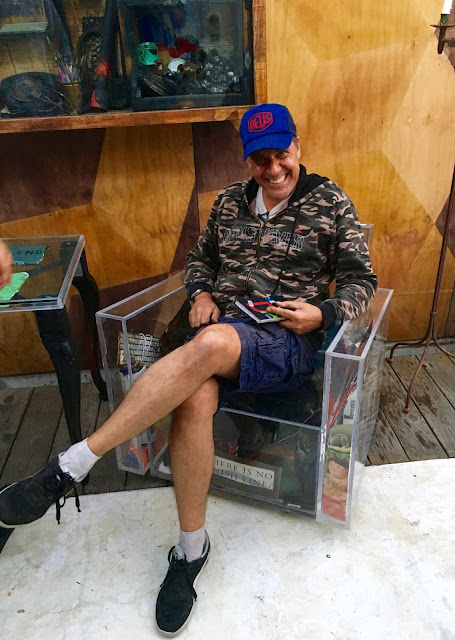 There were drinks and good conversation there, but there was also a whole bunch more art to see, and we'd already killed a lot of time. We had more Crawlers join us as we aimed for the beach down Venice Boulevard. It didn't seem like much was happening at the Venice Library, so we went on over to Sunny Bak's place to see her, and the silent auction going on there to benefit the Art Crawl Afterburn in the fall. 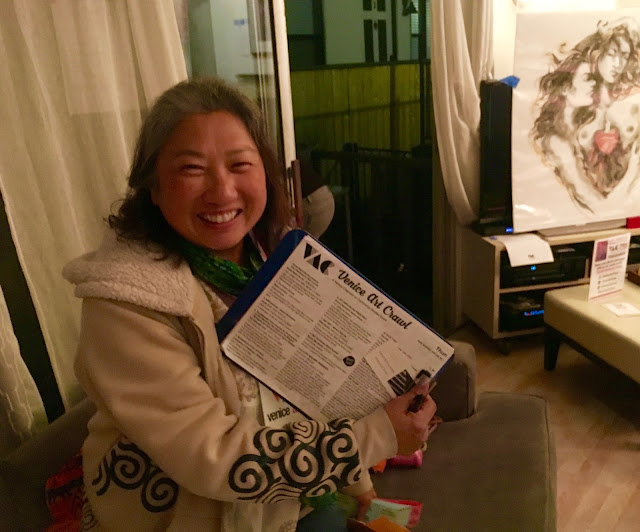 Sunny does SO much for this Art Crawl, and one of the reasons this Crawl was small, is that she does most of it herself, it seems like. She needs help, volunteers, artists, venues, money ... HELP. It takes a whole community to pull these things off, and we need to all be in it together. One of the best ways to combat gentrification and tech company take-overs is to PARTICIPATE in events. Be SEEN in your Community. Many people I talked to yesterday weren't even aware the Art Crawl was being held last night, though there are banners up all over town, and promotions all over social media. C'mon, Venice. Time to re-boot the school spirit. Thanks!

There was live painting happening outside at Sunny's by Ana Escobar, and the bright colorful pieces brought some fun and vibrancy to the night - plus it's always fun to watch people work. 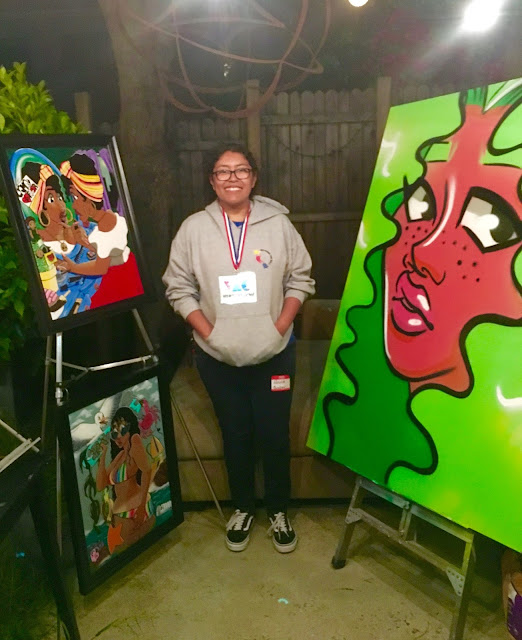 Time was ticking, so we raced over to the C.A.V.E. to see the beautiful show Sixth Extinction by Louis Masai. It features colorful animals that are endangered or extinct, and is centered by a bee hovering over some flowers. I love Masai's work, and first saw it as a mural behind the G2 Gallery on Abbot Kinney. It's up through May, I believe, and well worth your time to check out on your way to the beach. 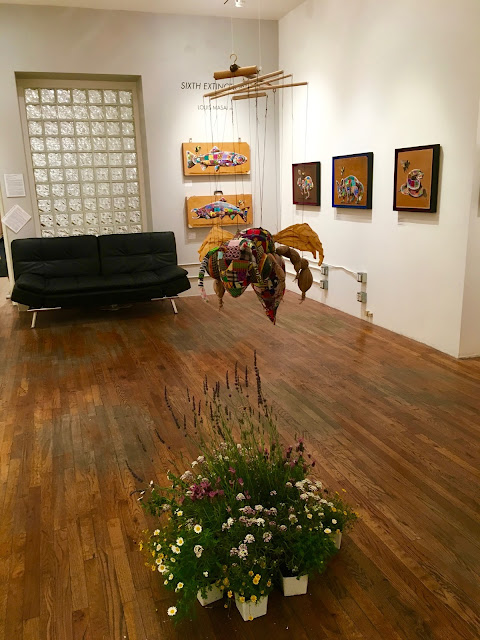 We were too late to see Deb Louck's new work at Small World Books, as we found the doors locked. Bummer. It's all still up though, so I'll still go see it and so should you. I love her stuff. We didn't make it into Sidewalk Café either, as now we ran into friends that were on their way to the Canal Club. There was a ton of fun art in the back room there, in a show called "ARTravenous" by James Berkowitz, with various artists showing. There was a big crowd there, and everyone was clearly having a good time. 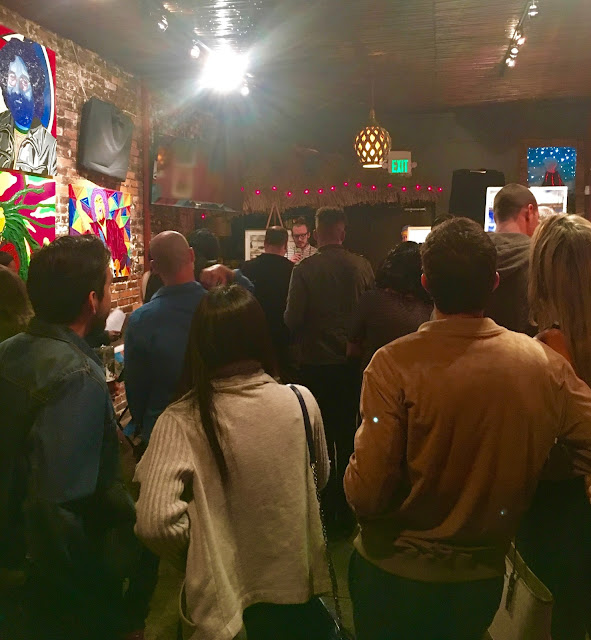 This was a fun Crawl, as I rolled around with Venice lady legends, Greta Cobar and Suzy Williams - two of my all time favorite Venetians. Laughs were had. 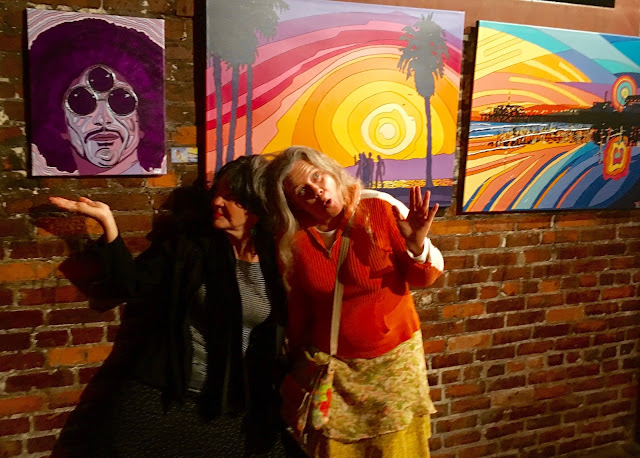 It was vital that we cross the street to James Beach with Danny Samakow, both to see all of his beautiful paintings that were featured on the dining room walls ... and to do shots of some crazy rum together. Why not? (I poured a little out for Chris Cornell. Respect.) 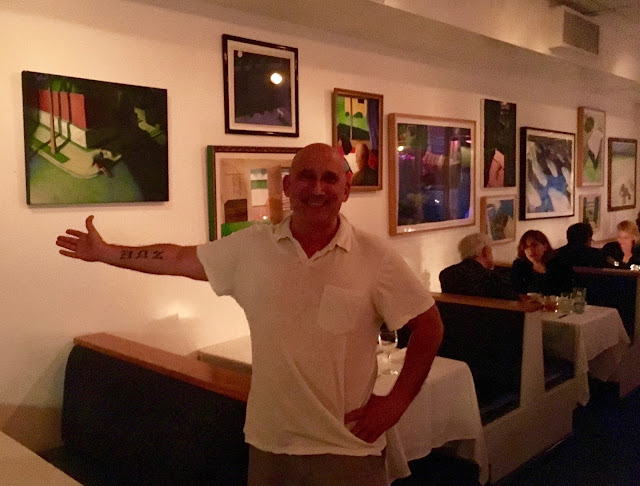 There was still a lot going on all over town, but now it was getting late and people had to work today. It was great to see all the people out and about, on foot and bike, enjoying the sort of holiday feeling that comes with an event like the Venice Art Crawl. We are lucky people. We are alive and creating and sharing and celebrating art and each other in Venice, California.