A Miracle, A Concert, And An Art Opening - A Venice Thursday Evening

Though Venice has been shrouded in May Gray the past few days, no one let the gloominess dampen their spirits last night. There were a million things going on, and it felt like people really just wanted to shrug off how heavy the world is lately, and just have some good old fun.

My friend K.C. Mancebo invited me to the preview opening of the new Miracle Theater in Inglewood, that promises to be an extra cool venue for excellent shows in the very near future. It's a great old theater built in 1937 (as The Ritz) that is the centerpiece of the little downtown Market Street in Inglewood. Miracle Mingle! 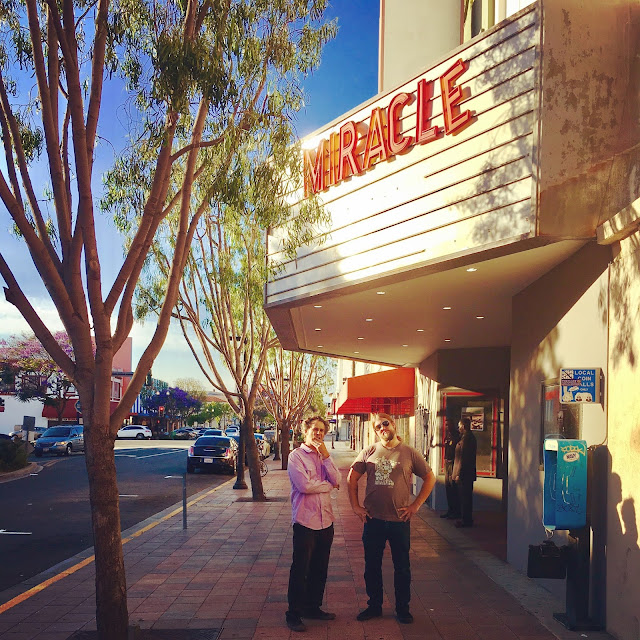 There are several art galleries nearby, and it looks like Inglewood is happening. It's really charming over there, and artists are there - a criteria I look for. The Miracle also has a massive event space next door to the theater, so anything at all could be put on in there. And if you build it, they will come. 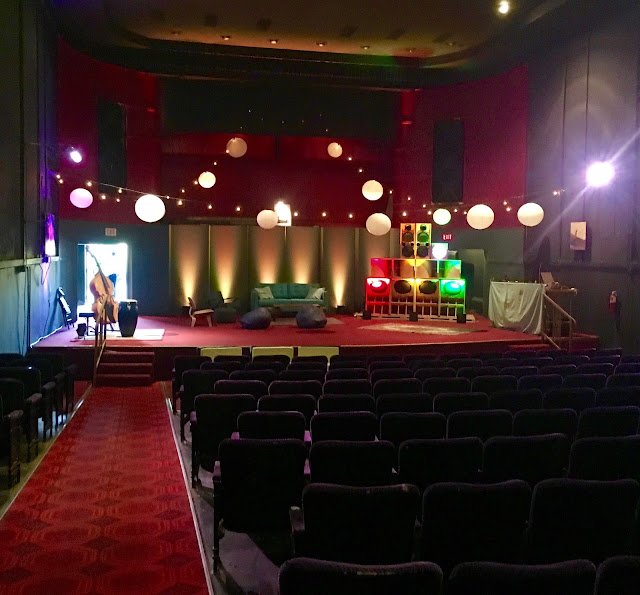 We got a little tour of the space, and dug the 70's loungey vibe they had going on the stage, with a great sound system. 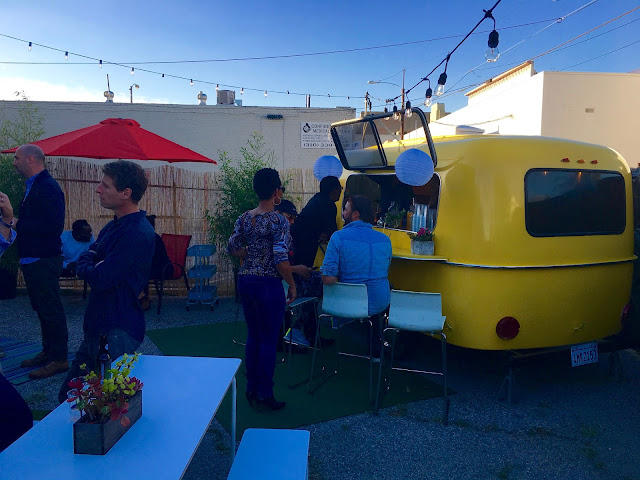 Westside Tacos had set up out back, and they might be the best tacos I've ever had. And that's saying something. The guys made their own tortillas fresh right in front of you! The fillings were creative and delicious, like the blueberry bbq brisket, that was ridiculous. As was the delectable veggie one I'm still thinking about. I was really impressed, and if you want people still talking about your party years later, I'd hire Westside Tacos to do the catering. For real. Yuuuuum. There were also fantastic drinks like lavender Old Fashioneds, that I didn't get to have enough of, because I had to race off to the next thing ... 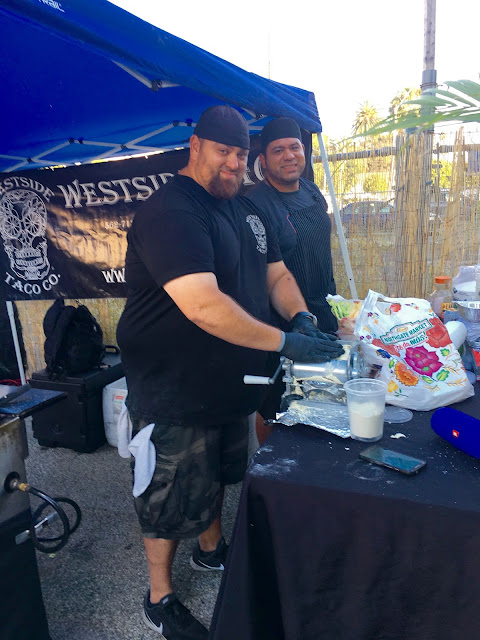 Back to Venice! Brad Kay was having one of his exceptional house concerts - Brad Kay Defies The Odds - and it was the best when I was walking down the street and heard the wonderful ragtime piano stylings of Mr. Kay from all the way down the block ...


Our Venice Songbird, Suzy Williams, had made paella, the wine was flowing, and people were clapping along and stomping their feet in time, as the concert rocked the house nearly off its foundation with all the applause that followed. 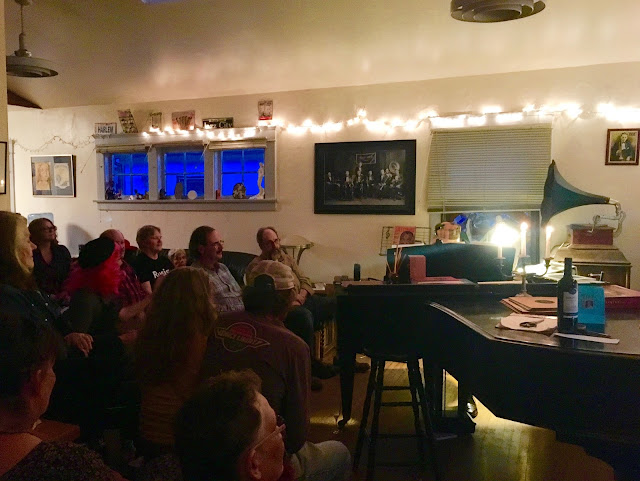 Kay has nearly a museum of cool instruments in his home, like a player piano, a big old Gramophone, large mutes ... all sorts of cool things. He played a duet with Fats Waller playing on the crank up record player that had the whole place cheering, because you just don't hear this kind of music much anymore. It was great - like time travel. 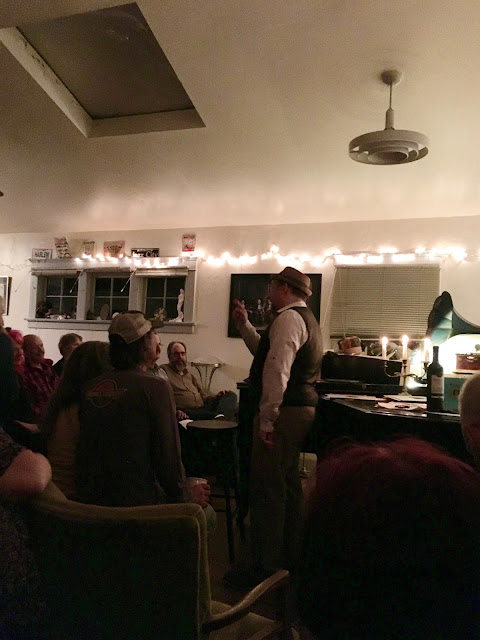 David Barlia joined Kay as his vaudeville partner, and they gave us a whole bunch of fun songs that would have fit right in on that old-timey touring circuit. It was so fun and charming, but it was also getting late, and we still had the last art opening at Abbot's Habit to get to.

Off we went to The Habit, where a group show of several local artists was going down. People spilled out on to the sidewalk, just like the good old days of events there on the corner of Abbot Kinney and California. 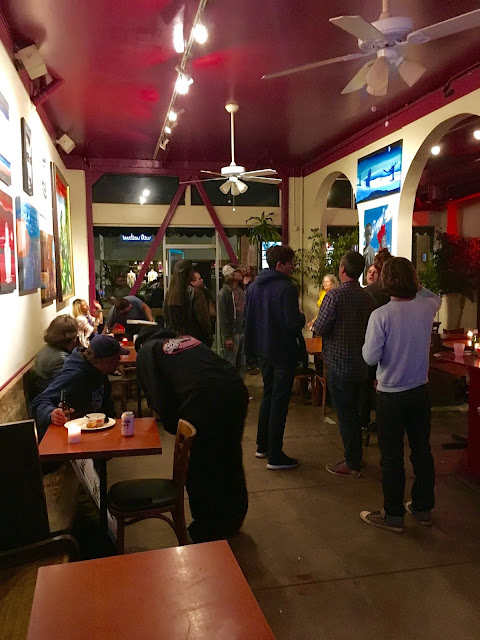 A D. J. spun tunes and more drinks flowed, as we all felt the weight of this being the last art opening in this venerable space. My brother, Paul, (who managed Abbot's Habit for years, and created the Friday night music nights) and I are going to do one more of those wonderfully memorable nights there at Abbot's Habit on June 23rd, and it's already way overbooked with musical artists. We're going to make a documentary about all of the wonderful memories that happened within those walls, and would love to see all of Venice squeezed in there on that second to last Friday night ever of The Habit. Please mark your calendars. 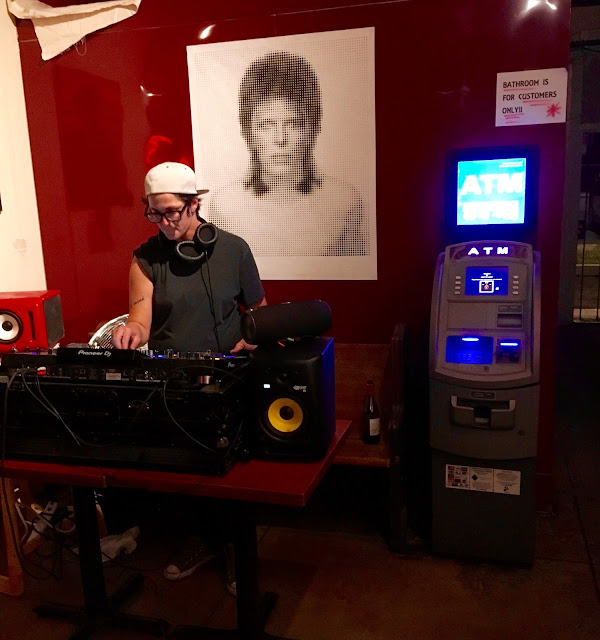 It was a lovely night of art and music in Venice, and I only missed the party at General Admission for the release of the Surf Shacks book that I really did want to make it to, but we did our best. And it was the best. Thanks to all who made it so!