If you ever wanted to visit Venice (and we call it Venice, not Venice Beach), California in all its glory, this past weekend was the time to do it. From actual carnival upside down rides, to the art that brought thousands down to the beach, to the sunshine that broke through to illuminate it all, it was truly one for the ages over here. 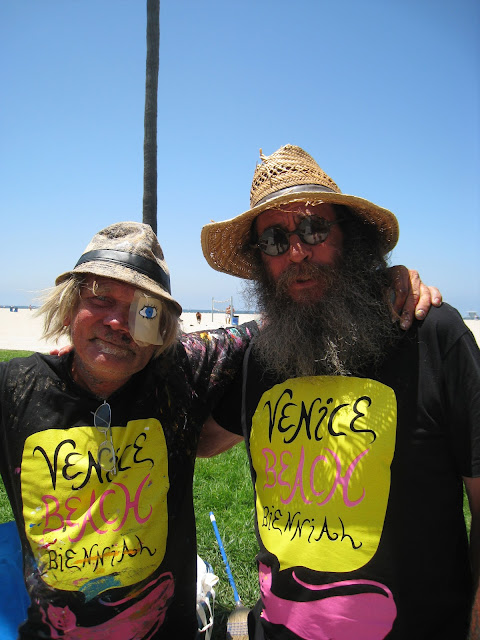 The Hammer Museum came down to put on the "Venice Beach Biennial" (which the materials all keep calling a "tongue in cheek" play on the Venice Biennale in Italy - Thanks, we get it.), where a bunch of "Museum" artists joined the Venice artists that are down on the Boardwalk every day, to showcase both styles of art. But art is ALL art, no? 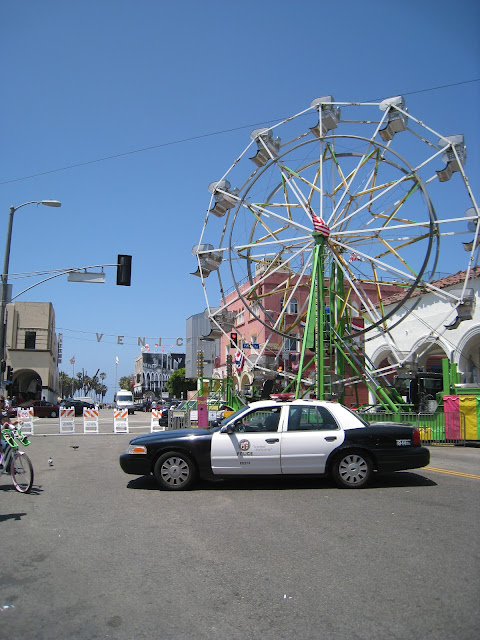 There was a real old style Carnival in Windward Circle put on, interestingly, I thought, by the LAPD. Interesting, considering there are always talks about budget cuts and not enough officers to get the jobs done, but they can throw up a bunch of rides and man-power to watch all the additional people said carny rides bring out? Is it perhaps a little bit to help the image, or what? Interesting, that's all I'm saying. 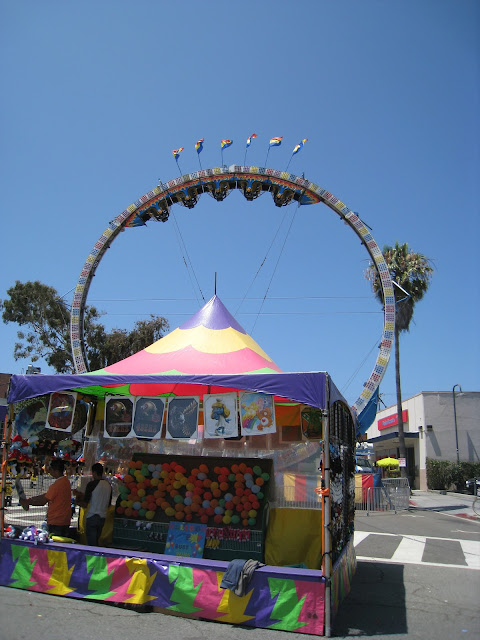 I'm not that into rides that are thrown up in a few days, so that whole deal was pretty much a bike through all weekend, but I'm glad the little kids had fun.  The great thing for me was seeing the focus on ART again at the beach. On the beach artists, to be specific, as though the Hammer project brought their artists down, they were not nearly as visible as the people crafting and selling their work every day of the week down there. Aside from the big show pieces nearest Windward Circle, it was near impossible to differentiate who came from where ... it was just ALL art. And beautiful. If you couldn't get down there, let me now take you on a little stroll with me, yesterday. Imagine the sun warming your back as you walked, the sea salt breeze making it all perfectly comfortable, music everywhere, and the childhood smells of a day at the beach ... except with the sage, incense, and weed smoke moments of now. 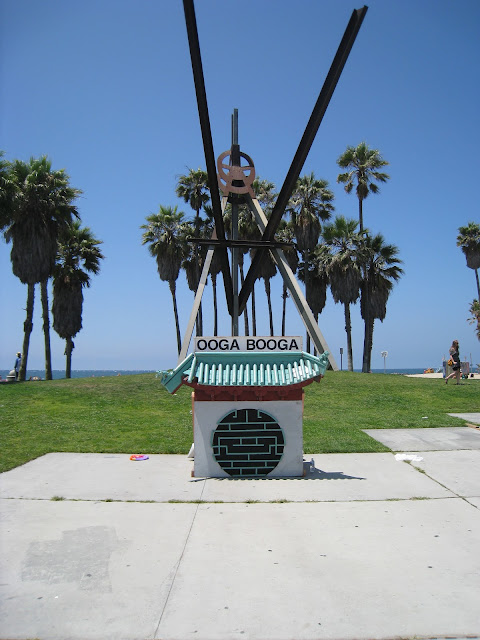 The day was so gorgeous out, it was a piece of art unto itself. One thing about the Hammer works was that they weren't labeled or identified in any way other than a dot on a map they gave out, so people weren't really sure what they were looking at. So I guess just look at it and enjoy. 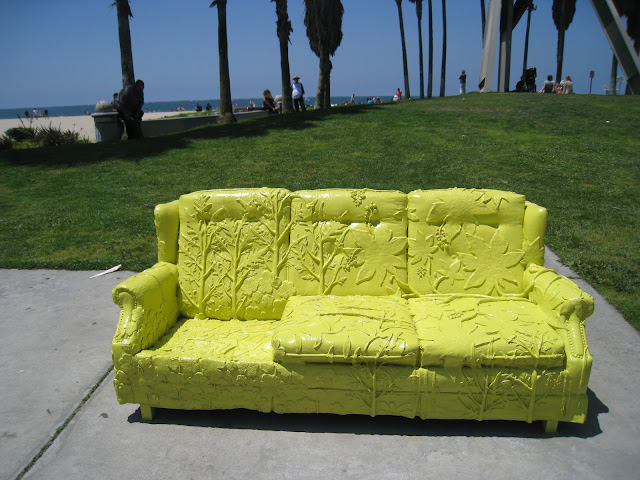 The pamphlet did say Weed Couch by Liz Craft, so I can tell you that the above is that. Lots of people stopped to chill on it and make it their profile pic today, I'm sure. It was not comfy, but was funny. 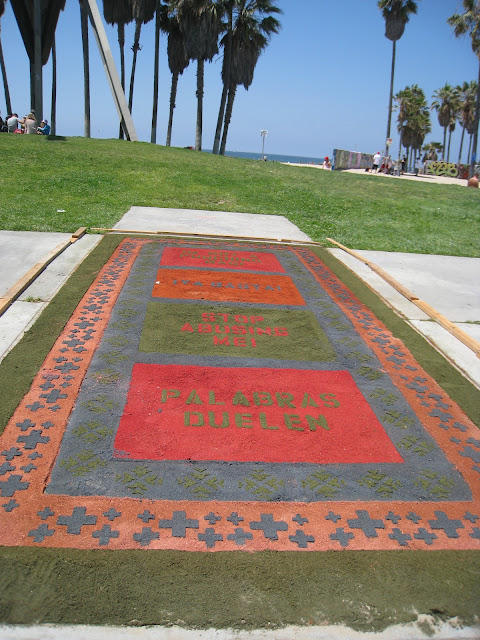 This seemed to be made out of dirt, and I think was Barbara Kruger's. It seems like her, anyway. 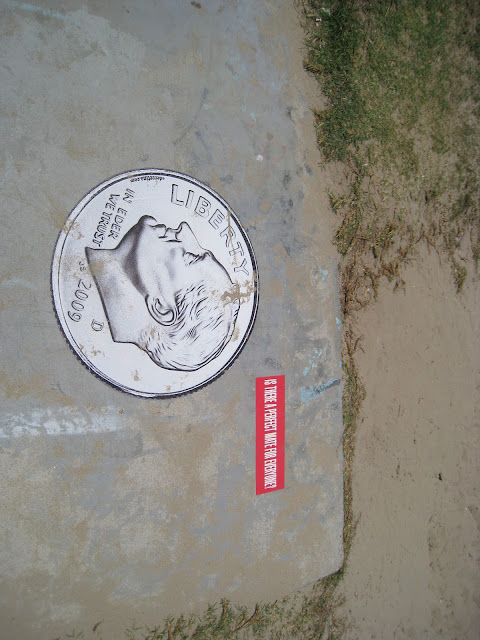 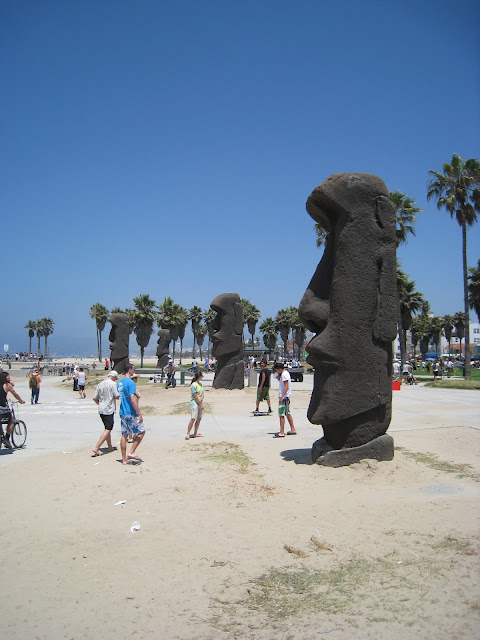 Big Easter Island Moai sculptures by Alex Israel had everyone taking attention away from the skaters in the skatepark for a minute. So cool. 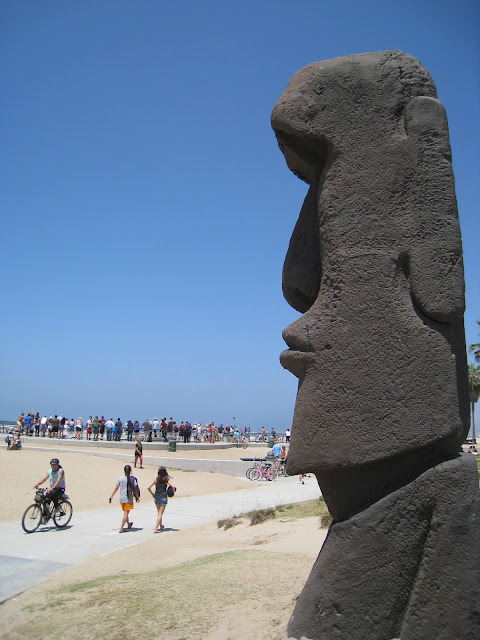 Big pink balloons marked booths where artists were being featured by the VBBiennial, but most of them appeared to be the people that can usually be found down there, like these colorful pieces by SKY (Stacey Kai Young). 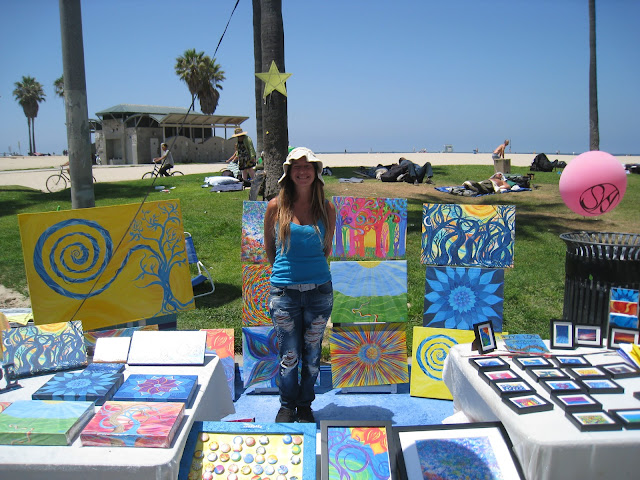 I spoke to Arthure "Art" Moore who was the featured artist on the materials for the VB Biennial, with his Funky Pussy painting as the logo for the whole deal. He was stoked on it all, and said that the Boardwalk artists were selling more than ever, and really being recognized for their work. VENICE was being recognized as a destination for art again, and that was important to everyone involved. I saw plenty of people holding their own version of Funky Pussy, so Moore, with his homemade eye patch, was taking full advantage of his new celebrity. 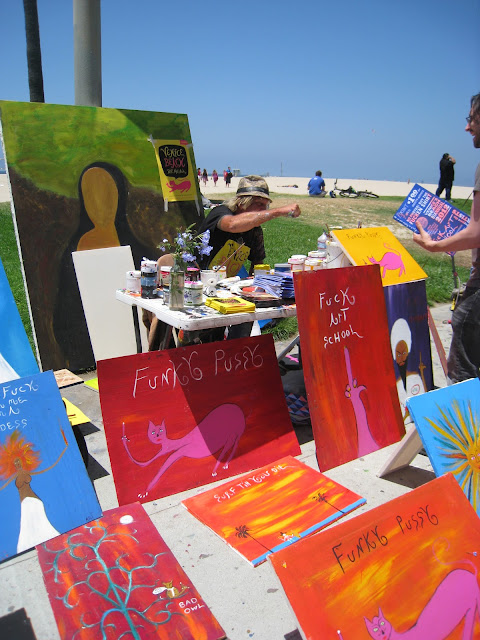 In fact, we couldn't chat too long as we were constantly interrupted by people who wanted their photo with him. Moore was happy to oblige and offered up his signature middle finger (with a smile) to all passersby and tourist photographers. Very Venice, very awesome. 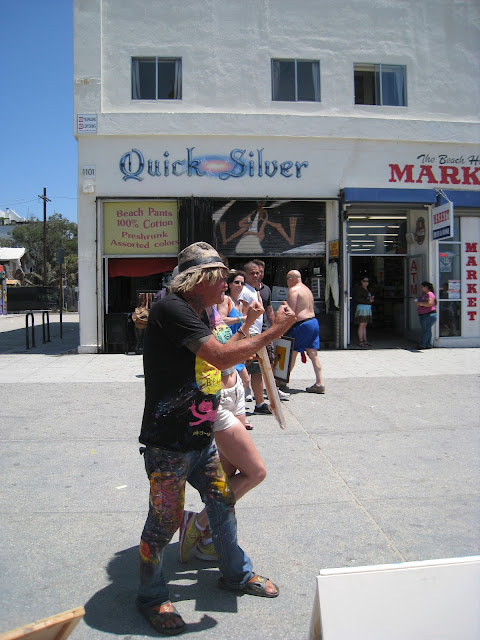 Thank goodness Rara Superstar was back from showing his art all over Ibiza in time to partake in the Biennial, as his colorful pieces are a crucial part of the Boardwalk landscape. He too was kept busy all day taking photos with people and selling them a new memory for their home collections, while reminding them that ""Love always wins". 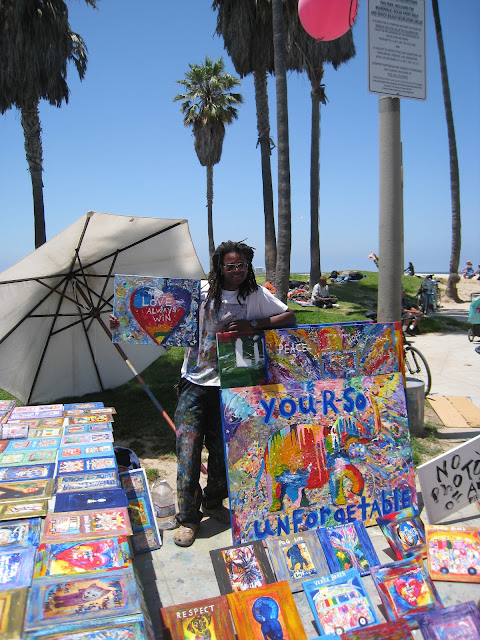 The day could not have been more pristine, so it was a complete pleasure to amble along and spend more time than you normally would really looking at everything. The bright sunny mood was infectious, and people were open and friendly and into it. One of those days like what could be bad? 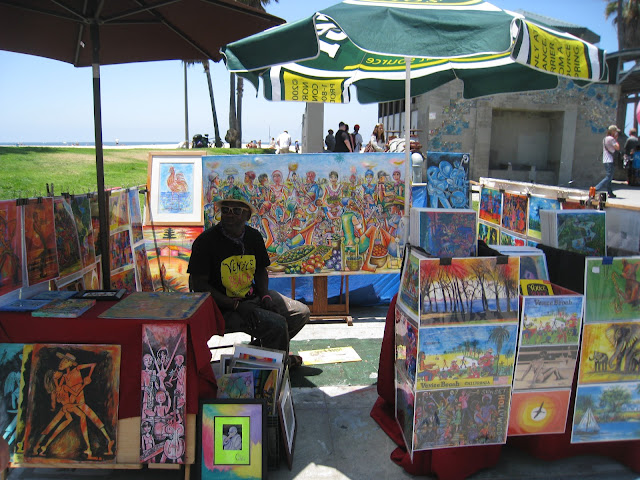 All the art looked great against such a beautiful beachy background, that it made you want to get a piece from everyone you passed by. I made a lot of notes on who to return to when I need a perfectly Venice gift for someone. I think a lot of that was going on, really. What better souvenir to bring someone back than a piece of art from someone most likely painting it right there off the sand? 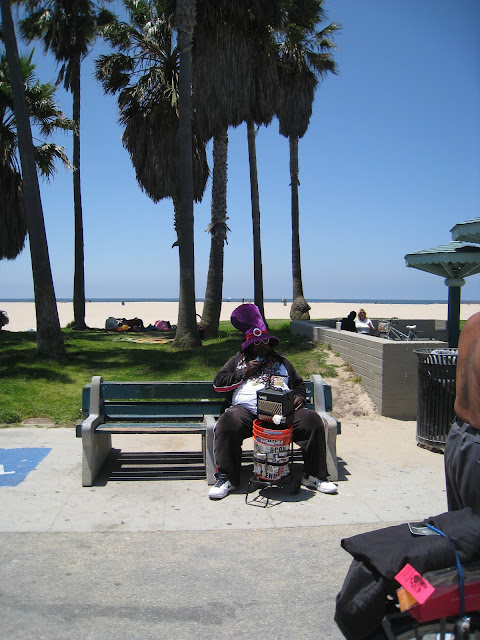 There were street performers and Hammer performers (none of whom did I see all day), and I was stoked to get my own little rap from Dr. Geek ... Hey, Blondie, I like the way you wear your laundry ... Rad. 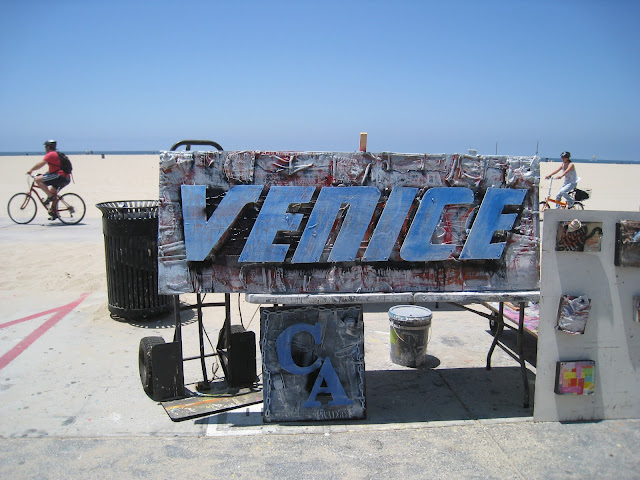 This piece was metal. Literally. Dug it. 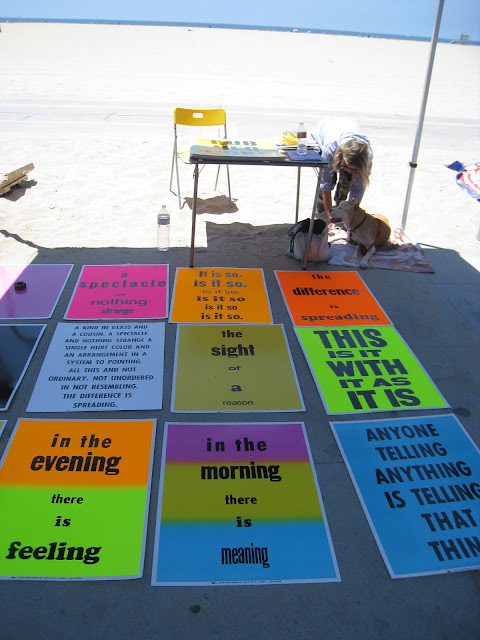 I've always been partial to art with words. I'm sure there's some name for this affinity, but I just know I like it. Clearly. 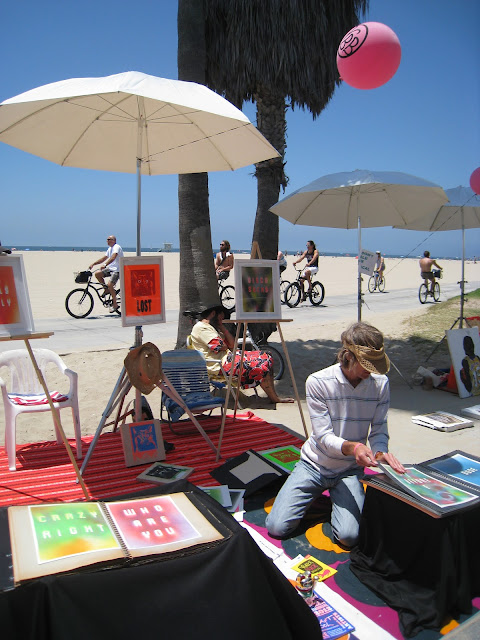 Ibraham was performing in full voice and drums down by the Venice Bistro, and it gave the day a wonderfully authentic soundtrack of badassness. 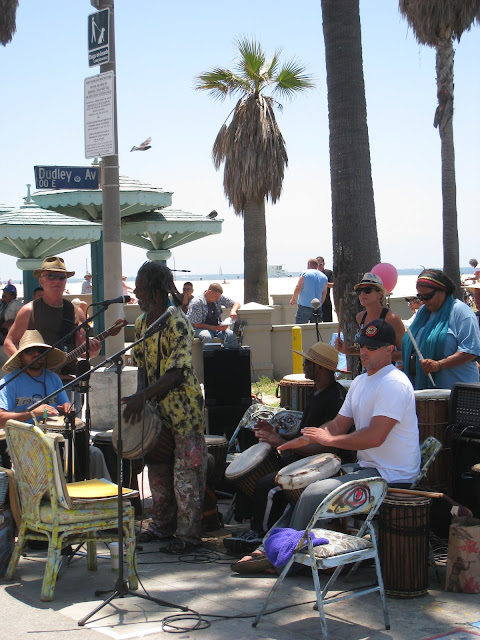 Art showed up in all mediums, from paintings to jewelry to crazy little heads of figures from Bob Marley to Wilma Flinstone, if that was your thing. 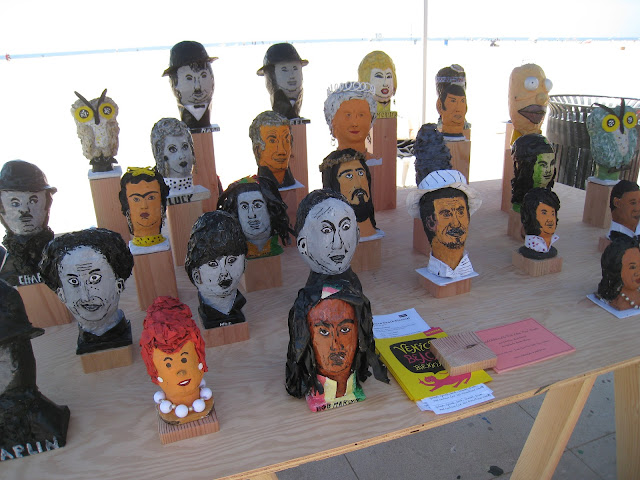 Humor was everywhere - also very Venice - as even the Funky Pussy official materials were pretty funny. Some guys were hawking "Official Bum signs - For just 1 dollar you can own your own bum sign!" yelled some very official looking gentlemen who had made funny cardboard signs for your purchasing pleasure. They wouldn't let me take a photo. Of course. Then I saw that someone had made this piece, available for $2,500 - including delivery! I think it sold, as it wasn't there today ... It DID say "Today only"... 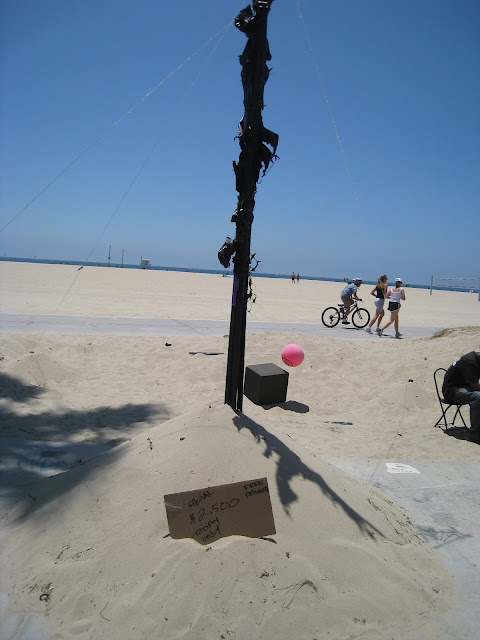 Bikes and funky pussy together! That's pretty Venice, of course ... 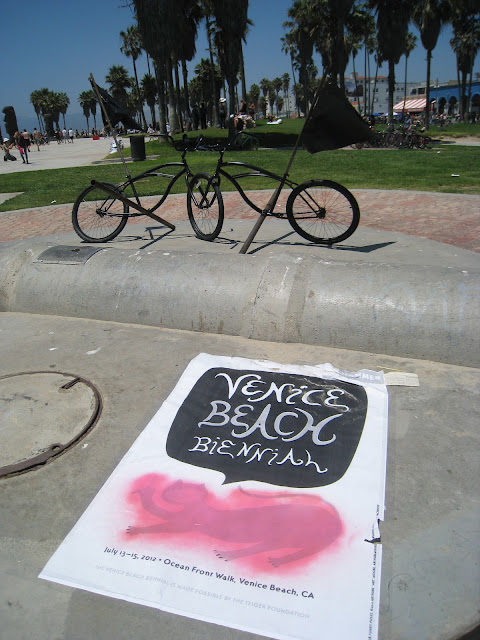 I had a lot of places to be on this Sunday, all of them the best. I saw the great Paul Chesne for a few songs at Primitivo ... 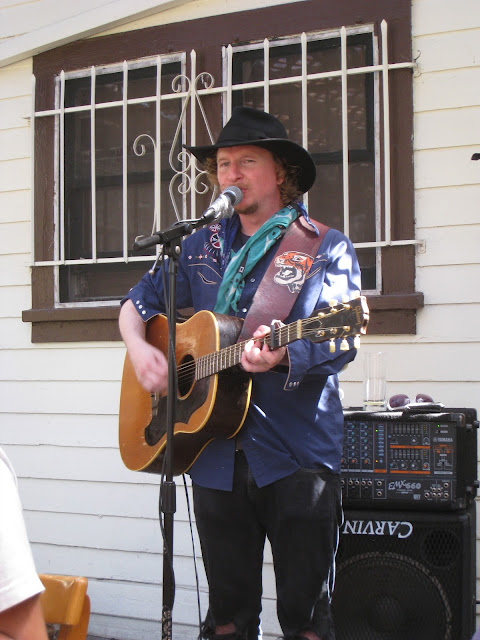 I had some mimosas at Danny's Deli in the heart of it all. I saw more friends and made some new ones as I headed back through the Carnival to get myself to the Hollywood Bowl in time for my favorite, Reggae Night (Ziggy! Toots!) ... 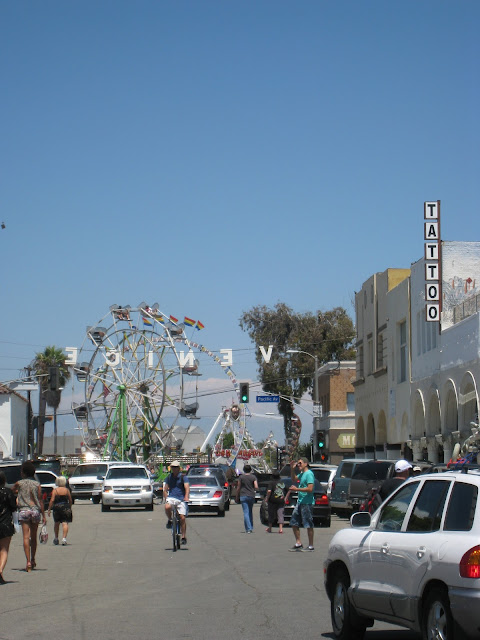 I was just beaming all day at how fun and cool life can be, especially here in Venice. I think the best thing I overheard all day was from a middle aged couple - clearly tourists -  walking down the Boardwalk. The man said, "I think we're going the wrong way." The woman smiled and said, "I think we're in the right place to be going the wrong way."

Exactly. She got it. I get it. In that moment, we got each other. And that's what days like these are all about.