Oh, Suzy Williams. How are you so so cool? Well, for starters. she and her husband, Gerry Fialka, put on The Lit Show every year at Beyond Baroque, where you hear the words of famous authors put to jazzy compositions by Suzy and Brad Kay. Where you wind up being not only thoroughly entertained, but smarter. 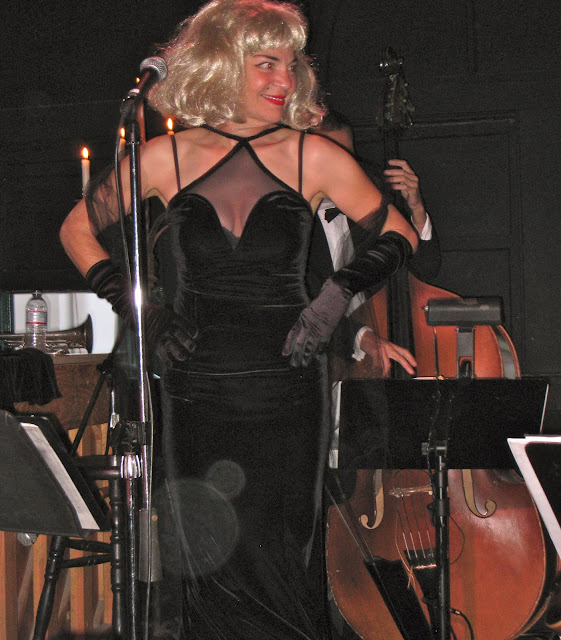 In the 7th or 8th Annual (no one was really sure which) Lit Show, Suzy and Brad were joined by Oliver Steinberg on stand up bass, Carol Chaikin on everything (well, flute, clarinet and two different saxes), Barry Zweig on guitar, and Don Allen on drums. And the entire crowd of loyal Venice fans on laughter, clapping and the opening chorus of "The Liiiiiiiiiiiiiiiiiit Show!!!!" Everyone was down from the opening notes, that Suzy delivered in full Marilyn Monroe (who was also featured on the evening's program cover, reading Ulysses) regalia, right down to the beauty mark. That's the thing about Suzy, she really DELIVERS every single word, making her especially great at adapting such glorious words from authors that you may not have even known ever wrote song lyrics. 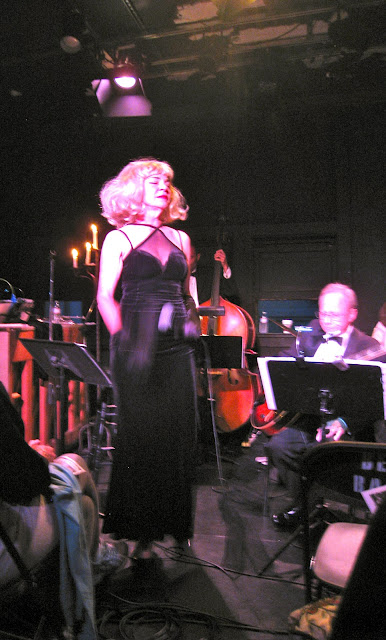 Like Kurt Vonnegut, Rudyard Kipling, and Ben Hecht (very upbeat number from the dude who wrote Scarface, etal!). Even Ray Bradbury, who lived exactly right across the street here in Venice for a spell, and whose song, "Bedtime Exercise" found Suzy portraying a sexy robot. A "Venusian Venetian."  To introduce Nabokov's ditty from Lolita, Suzy said, "Let's blow it all to Hell!" Which happened, particularly due to Carol Chaikin's sax blowing that was so feeling it that it reminded me of Lisa Simpson going off.

"The Great Secret", inspired by words from Hafiz, Suzy's "Spiritual Master", turned out to be that There really is no such thing as sin ... so we're off the hook, boys and girls! Suzy is the best. She reminds me a little of Bette Midler in her delivery, and her not giving a damn what anyone thinks, straight up doing her own thing, and in the vaudeville style way she interacts with the crowd. Suzy is a true mold breaker, though, and fully deserving of her title, The Venice Songbird. 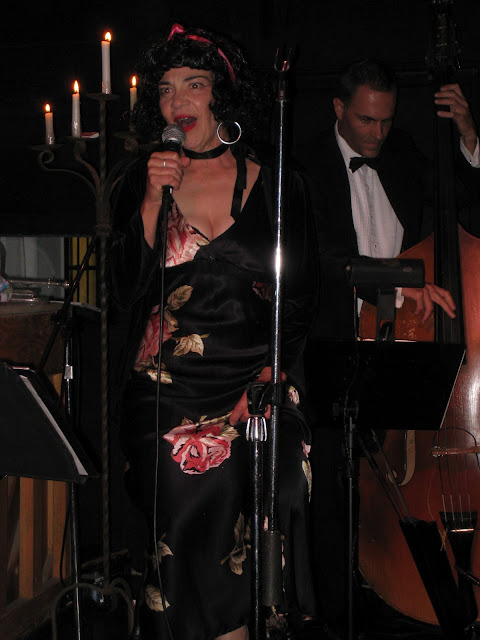 After a brief intermission, Suzy returned to the stage as a sultry brunette, salting the set with funny little asides like, "Edna liked to be called 'Vincent'" about Edna St. Vincent Millay. For Vonnegut, Suzy donned a turban and hoop earrings and shook a maraca for the summery delight of "Bokomon's Calypso" from Cat's Cradle. All the Venice faces were smiling along, deeply in love with the divine Ms. W.  Nice, Nice, Very Nice! 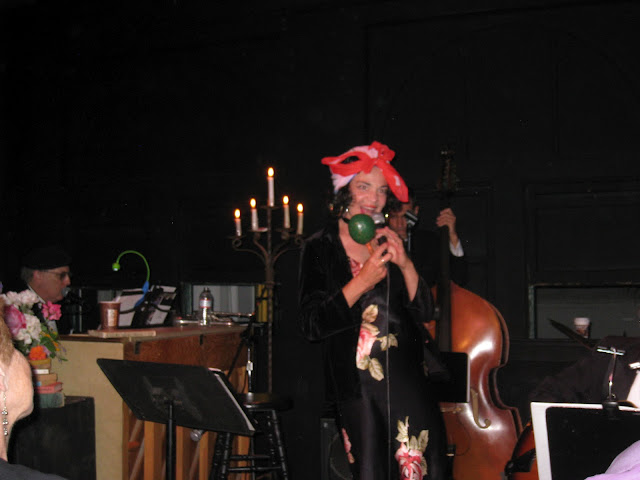 The "G Rated Bessie Smith of Venice", introduced Brad Kay of Suzy when she sang "Little Shirley Beans". This one was inspired by Salinger's Catcher In The Rye - which she suggested everyone re-read when they're older. I'm going to.

The very bohemianly awesome evening ended with the crowd singing along "LOOOOOOOOOVE!" with Suzy to "A Song of Love" by Lewis Carroll (from Sylvie and Bruno). I loved every bit of it, and urge anyone who's never seen Suzy to get there and get charmed by our dear local treasure songbird. Especially because she shouts great things like, "Don't forget! Marilyn Monroe is always on the merry go round reading Ulysses!" to end her show. 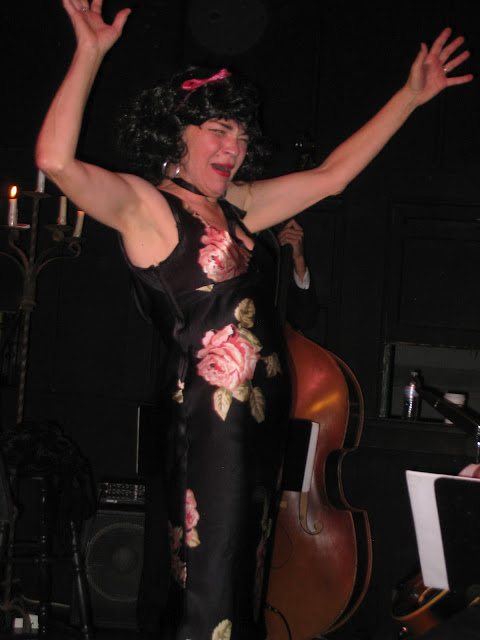 The Liiiiiiiiiiiiit Show was about the most sweet/street, smart/tart time I've had in a while, and truly so original. Just like Suzy.