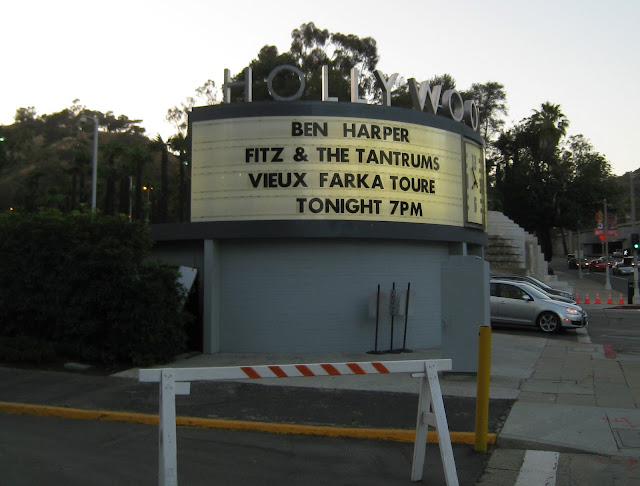 As is usually the case with the Bowl, we got there late and missed opening act, Vieux Farka Toure, the guitar sensation from Mali. This was a shame as I heard many saying the guy stole the show, but I have no idea. We got there towards the end of second opening act, Fitz & The Tantrums. The hot lady singer yelled out, "I"m from LA, and people are SEXY up in this bitch!" She was not wrong. Everyone in the very diverse audience was looking all summery and good, and up and dancing to the disco inferno that these Tantrums brought. They did a cover of The Eurythmics, "Sweet Dreams" that they played their hearts out to, and the crowd responded with singing along and getting INTO it. 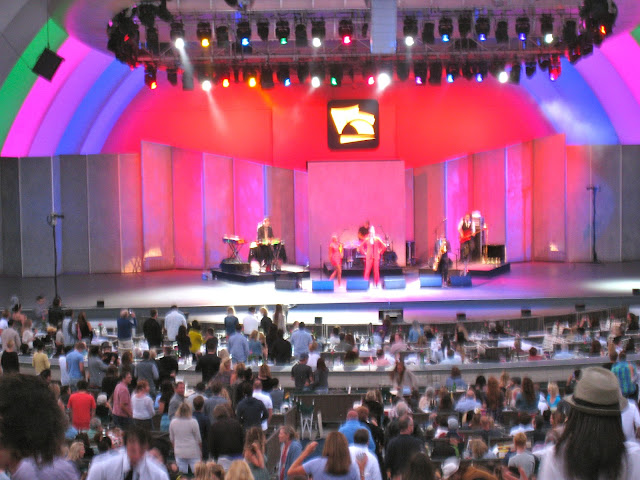 A little break to drink some champagne, under the lilac sky and almost full moon rise, found people mingling and getting excited for Ben to come out. Which he then did, with no fanfare at all, just a casual stroll out in jeans and a Lift (an organization to combat poverty) t-shirt, to sit down with his signature Weissenborn guitar. He simply said, "Thank you very much. This is dedicated to the incomparable Veronique Peck", and launched into a sublime instrumental piece that I think is new ("All My Heart Can Take" merged into "Mutt"?), accompanied by Jessy Green on violin. It was ballsy to open with such a quiet and elegant piece, especially after all the riling up of the crowd that Fitz and The Tantrums began. And it worked. It was silent as everyone just listened to the beautiful notes on such a beautiful evening ... right up until the last chord rang out and the place blew up with cheers. It set the tone for pure music appreciation, as opposed to being just a party. 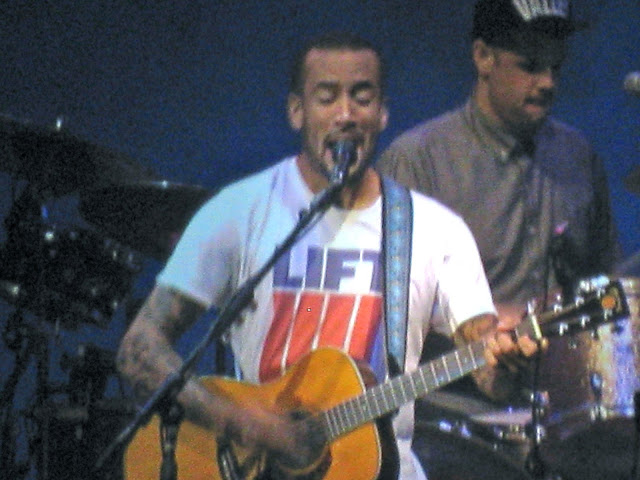 "Another Lonely Day", a crowd favorite from way back (and the yells came from WAAAAAY back) was just Ben and his acoustic guitar, which is all you really need. "I'd like to invite the band on," said Ben after that one, and his current backing band, The Relentless 7 (Jordan Richardson on drums, Jason Mozersky on guitar, Jesse Ingalls on bass, and Justin Pate on keyboards, as well as Jessy Green on violin and Tim Loo on cello) joined him for a lush version of "Morning Yearning". After that one, Ben acknowledged his hometown of Claremont, California, and joked that half the Bowl was filled with folks hailing from there - which the yells throughout the place confirmed.  His "hometown heroes", The Real Time Jazz Band, inspired his next number, "Suzie Blue", which was a great example of how very wide Harper's range always is. It featured a slick Weissenborn solo and a falsetto finish that had dudes yelling, "GO BEN!!!". He WENT. 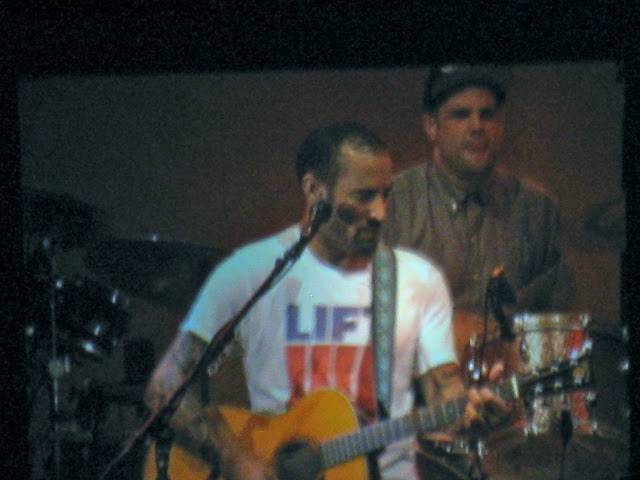 A real treat of the night was when Ben invited out Natalie Maines (Dixie Chicks) for a stirring cover of Pink Floyd's "Mother". CHILLS. Solid Lefties both, Ben and Natalie combined to make this duet with Ben on the slide (with a METAL solo) and Natalie's voice soaring, a real commentary on the times. "Mother, should I trust the Government?" was answered with a loud "NOOOOOO!" from the People. It was EPIC, and I hope so much someone recorded that thing. "Hey Mom, I'm playing the Hollywood Bowl", shouted Ben at song's end, and commented on how great it was that he's now seen his own Mother and his kids play on that very stage, separate from him. Three generations, how very very cool and special.

"Diamonds On The Inside" was as perfectly great as ever, and then another wonderful surprise happened when Ben asked Rickie Lee Jones to join him onstage. Ben produced her upcoming album (The Devil You Know), and said that by doing so, "I'VE been produced". He once again took a backseat and just played acoustic guitar while Rickie Lee SANG his glorious song, "Masterpiece". It was so gorgeous I got a little misty as I looked around at all the people loving this song about real love. It just broke it down as the reason we're all here, and as all that really matters. WOW. 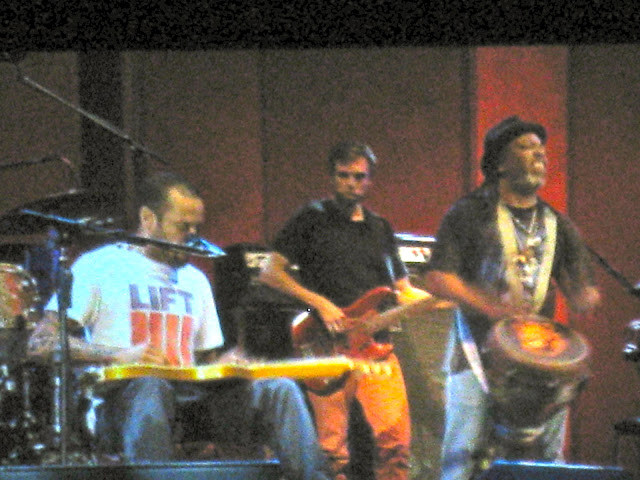 That slow reverie was soon replaced by the dedication to "The Bones Brigade" (many of whom were in the house, as Ben is as much a skater as a musician these days ... Mike McGill, Steve Caballero, Bob Burnquist ...The Cove Group ... Stoner Park ... all got shout outs from Ben, and they shouted back), and invited out "Innocent Criminal #1", Leon Mobley to jam with him on percussion. Ben TORE UP the intro to "Ground On Down" in such a metal fashion that people leapt to their feet to fucking ROCK it with him. The place busted wide open (that is except for way down front - it seems that the best seats often go to the worst people - where they sat and sipped boringly) and the rock/skate connection was abundantly clear. This was music to shred by. Leon mugged it up and got huge cheers when he split, and Ben laughed, saying, "He'll be back."

Back on Weissenborn, Ben sat down to deliver "Number With No Name", which wound up being a soundtrack for many people heading to the bathroom. I guess they liked the older stuff, which was a refrain I heard from more than a few, and which is always the case with almost anyone you go see. Tough. 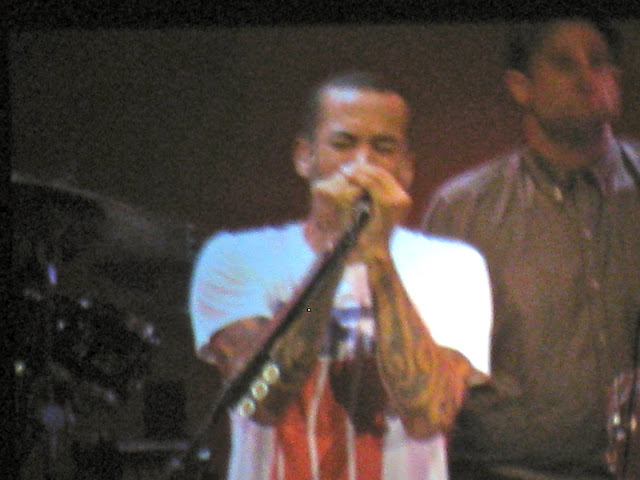 "Better Way" was dedicated to those who participated in the previous day's big Chinatown protest against Wal-Mart, where Ben and Tom Morello played in solidarity with the People. Which I love. The lyrics of "Better Way" are some of the smartest and best around, asking questions like, "What good is a cynic with no better plan?" and asking for us all to join together to find and execute a better way. Songs like this are the ones that make a difference in the world, and I love to see artists using their voices like this, with the idea that we can do better - again, sung while wearing his LIFT shirt. This is why I am, and will always be, a fan of this exceptional man. There was a call and response of "Better way, better way" and people even stopped Twittering and stuff to actually participate! Powerful indeed.

Strangely, then it was already "THANK YOU, Hollywood Bowl!" time and the requisite screaming for an encore. It seemed really short, and I was not alone in thinking this. A little Asian visitor man in the box next to me said, "This is very good concert. Very variety." in a great summation of the set thus far. 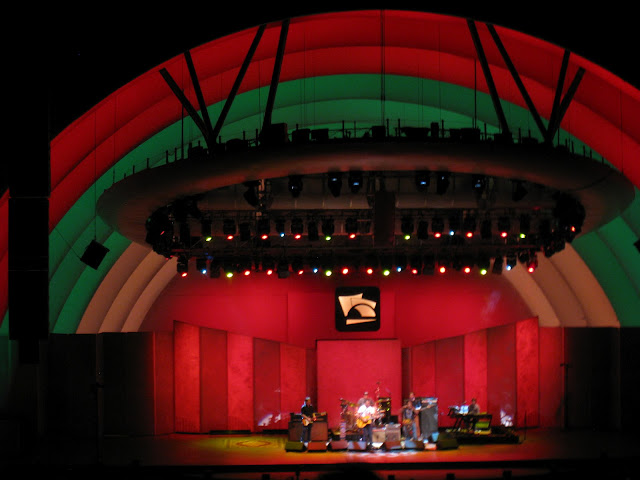 Ben came back, carrying a skateboard, to play an acoustic "Amen, Omen", with such strong, empassioned vocals that people spontaneously broke out in grateful shouts. SOUL. That prettiness was switched up again when the band and Leon Mobley came back to torch up the now Rasta-colored Bowl with "Burn One Down". At this point, the Bowl became a different kind of bowl, as revelers lit up and passed one over to me, my friend, all over the joint. On cue. I made some new friends myself during that one, and it was fun to see Ben and Leon arm in arm, having a blast, as we all were. 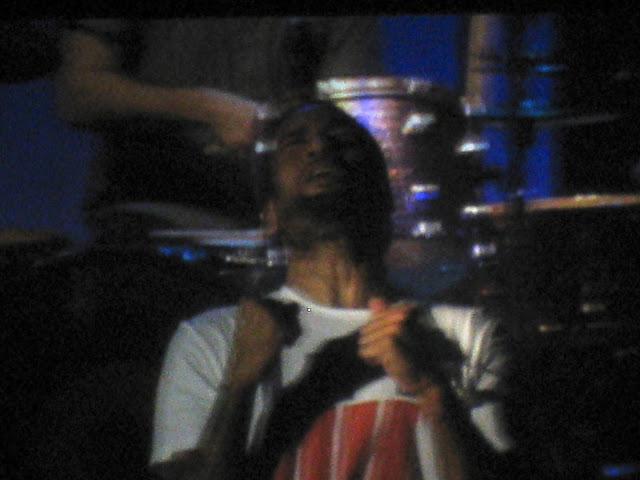 The highlight of the evening was also the last song, "Where Could I Go?" where Ben took everyone to CHURCH on this Sunday. Indeed, random people were yelling, "CHURCH!" all over the place as Ben gave every ounce of himself on this Gospel, witness of a song. He stepped to the front of the stage and made a quieting gesture, and then unleashed the absolute TRUTH of his words, without the aid of any mic, reaching up to the back of the bowl, and beyond to the stars. SO powerful, that when the music came back in, people LOST. THEIR. SHIT.

Leaping to their collective feet, screaming and whistling, this guy certainly knows how to work a crowd. There was then a pause, as Ben looked up and around, in what seemed like both humility and a little self-congratulatory, as the pause was so long that I heard a person on one side say, "This is a really emotional moment!" (thanks for clearing that up) and someone on the other side say, "Cheesy." For myself, I landed on the emotional side - no surprise there. 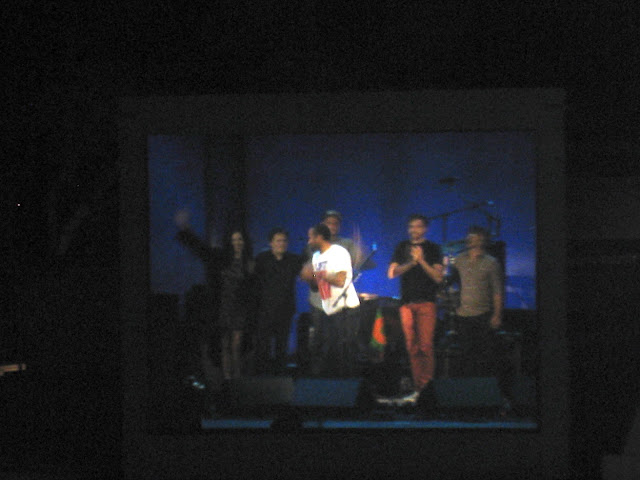 But when he ended (again and selfishly, too soon - especially with such a deep and varied catalog of fan favorites for Harper to choose from, you always want to hear another one) with "But to the Lord!" with a flourish from the band, it was a total madhouse, shouting celebration of a perfect Los Angeles night in there. Wonderful weather, great friends, champagne under the stars, every kind of song you'd ever want, and a clear awareness of the important things in life, delivered up by a true great. As Ben yelled "Thank you, Los Angeles!" and left the stage, many could be heard yelling back, "Thank you, Ben!"