Larry's Venice - The Art and Venice of Larry Bell

Renowned artist, Larry Bell, is a true Venice treasure. His profile, with hat and signature cigar, has been sighted all over town for decades, and is now the inspiration behind a new neighborhood hang about to open at the corner of Windward and Speedway, the aptly named "Larry's" (Currently featuring a sign outside reading "Who in the Heaven is Spanto? [sic]", which used to say "Larry" until someone graffiti'd over it with the name of our dearly departed friend, Sponto). 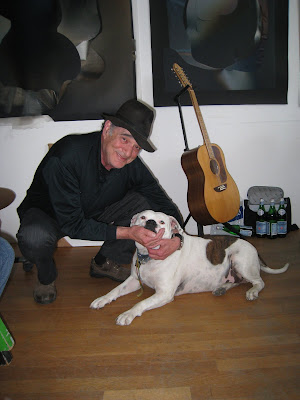 I got the chance to sit down and chat with Mr. Bell the other day in his Market Street art studio, and discover that he's even nicer than I already thought he was. Surrounded by his beautiful works of art, both finished and in progress, we sat and talked about his Venice, then and now. 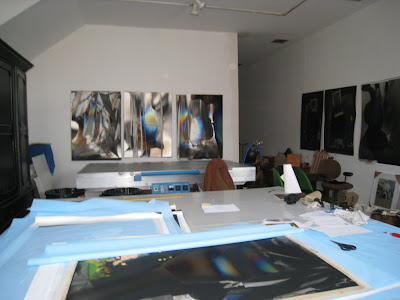 Bell was born in Chicago in 1939, and moved to L.A. with his family at the age of five. He always had interest in art and music, and thought he'd get into animation over at Disney. As part of his art school (Chouinard Art Institute) curriculum, he had to study painting, which soon became his focus ... to the extent that now his painting and sculptures can be seen in museums all around the world - and in his big, light Venice studio, where he likes to "meet the people who want to own my stuff."

At 19, Bell moved to Venice ... "because it was cheap." At that time, it was full of empty storefronts and considered dangerous, so he was able to secure his studio space for a mere $70 a month. Perfect for aspiring artists. A group of about 6-10 people started from scratch what became a true community of artists, and put Venice on the map as an art destination. Much of the gang became "The Cool School" (see the documentary of the same name to really get it), and gained fame worldwide. As we spoke about his work, Bell told me that "I'm interested in creating images I haven't seen before ... It's an organic cycle, I'm not in control, I'm more like the middle man." Interesting, as I've heard guitarist Leo Kottke say about the same thing, and it was then that I noticed Bell's 12 string guitar standing by. He claims to only noodle on it, but I have a feeling he's being overly humble, considering the concentration he seems to apply to everything.

In 1972, Bell "fell in love with a beautiful girl, and wanted to get her away from the competition", so he moved with her to Taos, New Mexico, where he traded his art for his new property. The marriage ultimately split up, and it was time to return to Venice. By some strange stroke of kismet, his exact same studio space was open and available on Market Street, unchanged and ready for him to get to work. He had built the doors on the front wall himself, in order to get large pieces and equipment in and out easier, and all remained intact. The only thing that changed was the Venice outside the doors. 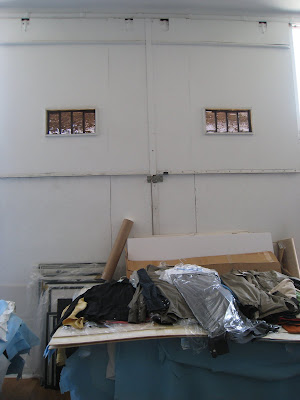 About that, Bell says, "Venice inherited a mystique about being a creative place, which is extraordinary because it IS ... Nothing lasts, and Venice is an organic, changing place, and you can't stop that or it's Knott's Berry Farm." The place remains special, and will always draw people because of, "The AIR! The ionized air from the sea ... the weather is perfect here all the time" (Well ... it certainly was the day we were talking). He also finds special that there isn't high density housing at the beach. It's still mostly individual homes and small apartment buildings, adding to the neighborhood vibe. We talked about cityhood for Venice, which he doesn't think possible for just the basic economic facts, like who would pay the cops, firemen, etc ... and added, "The best way to protect the funky edge of Venice is to get it historical status." Hmm ... an interesting idea, for sure.

In the years that Bell lived in Taos, he would always stay at the Marina Pacific Hotel when in Venice. He became fast friends with the owner, Erwin Sokol, and when the Marina Pacific became the Hotel Erwin a couple of years ago, Bell not only moved in, but helped design the lighting, and each room in the Erwin now contains a work by Larry Bell. He was invited to the hotel meetings to offer his input on various issues, and when the time came for Mr. Sokol to open a bar/restaurant in the ideal, hotel-adjacent location of Windward and Speedway, they all met to discuss possible names. 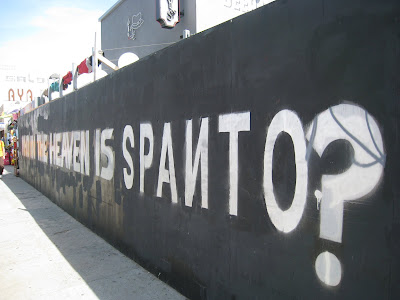 Bell offered up "Altoon's" (after John Altoon, a fellow Venice artist in the 50's and 60's, who lived nearby and died in 1969) as his choice, but was out-voted by the eventual winner - "Larry's". 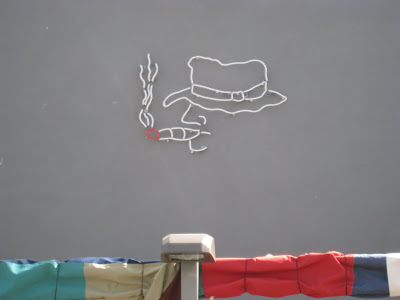 Bell drew his self-portrait in hat and cigar for the neon sign, and his paintings are featured inside. He also made a list of Venice artists, past and present, to be a mural on the outside wall of Larry's - honoring the people and art that has made Venice the place that it is - wearing the very heart of Venice on its sleeve. I spoke to owner, Erwin Sokol, and he hopes that Larry's will be open for business in the next couple of months, as they're sorting out the Chef/kitchen part of it all now. It now looks like Larry's will be open to greet the Summer along with the rest of us, and I can't wait to watch Venice roll by as we sit on the patio and appreciate it all from the namesake spot of one of our coolest residents. 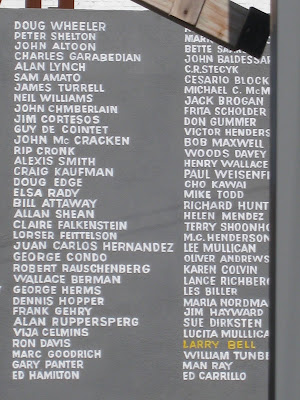 As we were wrapping up our time together, Bell's son, Oliver, and beloved American Bulldog, Pinky, came back from a walk, and we all turned our attention to that sweet dog. Market Street was abuzz outside, with people getting ready for the Art Crawl, and soaking up the warm afternoon sunshine. Bell walked me out, and as we said our goodbyes, he saw a girl sitting in the next doorway, headphones on, a million miles away. Bell held out his arms and said, "Look, beautiful girls sitting in doorways, on a beautiful day ..." 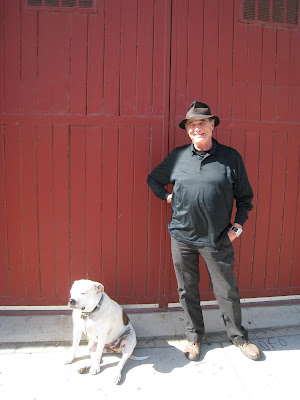 There was nothing else for me to say but, "We're lucky people." He turned and smiled rakishly, "Yes, we sure are."


An added bonus video of Bell's current exhibit in Nimes, Franceby, by his son Ollie: