I tend to kind of shrug about going out on St. Patrick's Day ... but not when one of my favorite bands around is playing at The Troubadour. State Radio blew through town on the west coast leg of their current tour, and shared their Boston Irish green with us, with their own particular cocktail of roots, rock, and reggae, with an acidic twist of dead serious lyrics that make you smarter and more compassionate - if you're listening.

I was honoring my Irish compatriots with a little whiskey prior to the show, so missed most of the opening band, The Tontons, but from what little I heard, (especially from cool chick singer, Asli Omar) I assuredly will be hearing more. The guys of State Radio have been my homies and comrades since traveling together on 2008's Justice Tour, so every time they come through L.A. it is a joyful reunion, and a great excuse to whoop it up - that it was March 17th only enhanced the rowdiness. 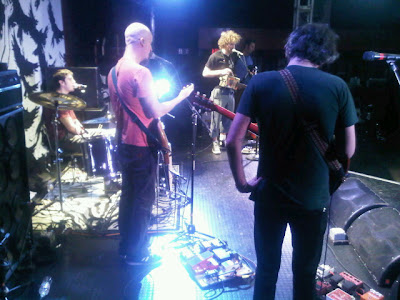 State Radio brought it right from the moment the old Troubadour went dark, the stage backed by a backdrop of flying black crows and candles. The guys (joined on this tour by Matt Embree of RX Bandits) went blasting right into fast rocker, "CIA", riling the crowd (dressed mostly in green, drinking mostly Guinness) up from the word Go. I didn't hear that much of "Desert Queen" because I was catching up with the lovely girlfriend and wife of band members. Sorry, Guys. 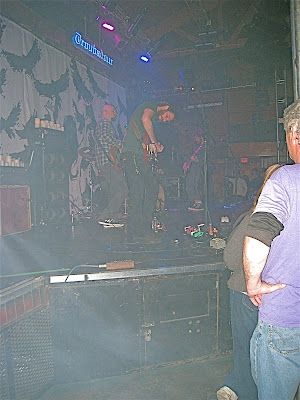 "Wicker Plane" started up and I noticed a guy down front - the entire time - wearing an "I Am Troy Davis" shirt, who air drummed along with Maddog Najarian the. entire. show. I mean non-stop. "I want to be THAT enthusiastic about something," I said to my friend. It was both funny and inspiring, as the cat knew every single word, every single drum beat/cymbal hit, and was in absolute Heaven the entire show. That's what it's all about, man. FEELING IT! 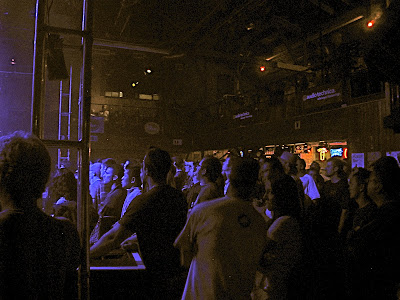 State Radio absolutely was feeling it last night, from Maddog's heavy beats to Chuck Fay breaking it down on his bass, to new addition Embree's steely rasta-sounding guitar, to Chad Urmston's lyrical voice leading it all into a frenzy on every tune. "Graces" and "Bohemian Grove" were a reggae-tinged double whammy that saw my friend yell into my ear, "I want to be in the islands!" That is exactly the sound, and the vibe, that I was in the mood for last night. Then my thoughts turned to Japan, then the world at large, then I focused on the last verse of "Bohemian Grove":

World control
And the opinion of the inner elite
Oh don't you know
That we are aching for a part in the chance worth taking
Who's to say
That we are destined just to fall at your feet
It's World Control
So that it's rendered to we, the people of the earth rolling round
Versailles. Way down. How long. Outlaw.

... Which made me think about Madison, Wisconsin, revolutions around the world, and all the other crazy stuff going on right now. Isn't it great that a fun-times reggae-sounding song can conjure up all these thoughts AND the feeling that you CAN do something about it all? That's State Radio for you.

Some great news is that I don't have Alzheimer's, and the songs that I thought I forgot/didn't know, are really NEW songs that will show up on State Radio's next album, that sources close to the band (like THE band) told me they hope to release this fall. They included "Adelaide" and "Take Cover" and both were so good that you'll want to do the pre-order thing.

"Gang Of Thieves". "Arsenic & Clover". "Fall Of The American Empire". The very powerful true story of "Camilo"... All of them had entire audience participation, from over the head clapping to singing loudly along to all lyrics. It's fun to watch the give and take between band and crowd in a little place like The Troubadour, because it's just so tangible. State Radio is one of those bands that gets SO involved, (both musically and activist-ly) that it naturally impels its fans to do same. So we did.

"Calling All Crows" shares its title with the wonderful organization founded by Chad and his girlfriend, Sybil, that strives to both assist and empower women around the world. SO crucial, and one of my most favorite SR songs musically as well. L.A.'s Calling All Crows event was for the local chapter of Dress For Success - an organization that helps women get ready for professional life through setting them up with business attire, skills and support. Word. 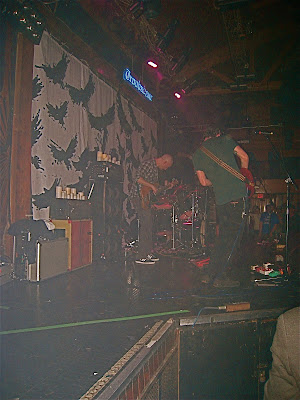 As it was St. Patrick's Day, it was the perfect time for the Boys from Boston to throw down their Irish jig of rock, "Knights Of Bostonia". Not one still body in the place for that one, and band and crowd shared beaming grins throughout. That was my perfect St. Patty's moment, no contest.

They wrapped up their regular set with "State Inspector", with (oil can) guitars and drums building to an explosion of music and yells that saw not one hipster posing. There were only people FEELING it in there by this point. Rock and roll.

After a split second wait for an encore, State Radio was back, this time with an instrument swap between Maddog and Chuck - Chuck on drums, and MD on bass - for the classic "Indian Moon". Again, the mood was extra-Rasta on this one, and I simply loved it. So did the entire house, as they sang as one, drowning out anyone with a mic. They closed the night with "Doctor Ron The Actor", a BIG hit with the Superfans (and I include myself), still grinning, screaming themselves hoarse with appreciation, thumping their friends on the backs, and in one case, a big air-drum finale flourish. 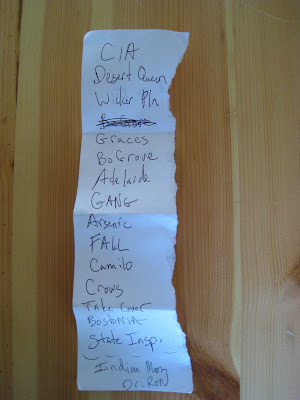 We got a chance to chat and do a quick catch up before the guys had to load out and head north to San Francisco to continue their tour. As we hugged our farewells for now, I thought about not only how GREAT nights like these are, but also how important. In precarious times like these (radiation on its way to L.A. from Japan ... etc .. etc ...) it's all the more important to treasure what we've got, while we've got it. I'll steal from "Indian Moon" to close out our story, as it sums up what I was feeling as I left The Troubadour last night all so perfectly:


*The one good first photo (regular photographer unavailable) was stolen from State Radio's twitter. Thank you!
Posted by CJ Gronner at 3:37 PM