Street Sweeper Social Club ... "We're not just a band, we're a Social Club!", exclaimed co-front man Boots Riley several times during the band/Social Club's BLISTERING rock show last night at The Roxy in Los Angeles. Meaning, they're gonna melt your faces off with the heavy tunes, the lyrics are going to be equally molten, but it's not just to sing and play about, it's also to live it, and try to improve social CONDITIONS at the same time.

New Orleans has music-based Social Clubs, and that's what the guys decided to name the band after plain "Street Sweeper" was already taken. It makes total sense. They've all spent time helping out in New Orleans, and their rock really is about in-your-face examinations of what's going on in society today. Boots and guitarist/friend Tom Morello teamed up a couple of years ago, when Tom just handed Boots a tape of music and said, "We're in a new band together. Add lyrics to these jams." and off they went. Their first tour was opening for Jane's Addiction and Nine Inch Nails on the NINJA tour last year, but they had yet to play in 80% of the band member's hometown of Los Angeles (Boots lives in Oakland) - until last night's KROQ sponsored sold-out throw down at The Roxy on Sunset.

The fans were ready for it too. I arrived too late to catch the opening acts (Hollis and The Memorials - who I saw just ending, and featured a shirtless drummer playing backwards at the front of the stage. Hmm.), but it was already pretty frenzied in the small room. Especially as it was clear that the Superfans were out, and many had probably maybe only seen Tom play his Rage riffs from a mile away on a Jumbotron at some festival, but never in a place so small you could see the individual sweat beads pour off his face as he executed said magic.

It felt exciting in there, like that concert build feeling when you hear the bass tuning behind the curtain, a couple drum beats, the stray guitar chord, each met with a rising swell of noise from the crowd. Suddenly old school hip hop on the P.A. turned into the Storm Trooper anthem from Star Wars ... ominous ... heavy ... Oh, MAN - the guys (and the crowd was heavily guy) down front were salivating ... Guitar Hero AND Star Wars all in one space/time continuum ... LIVE?! They were real, real happy, and vocally expressed it. Loudly. 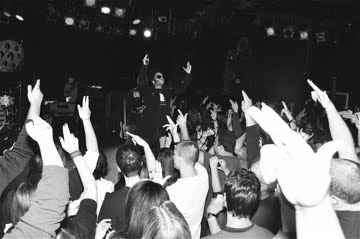 The curtain rose, and SSSC stood there in their matching military coats and FBI style shades, meaning business. Boots said, "Los Angeles! I'm Boots Riley, he's Tom Morello, and we're Street Sweeper Social Club!" and with that they launched into the heavily rocking title track from their new-ish EP, The Ghettoblaster EP. It's hard, it's loud, and the place was slam dancing from the first chord. Even this one old guy, who I promise didn't stop dancing - hard - ever. 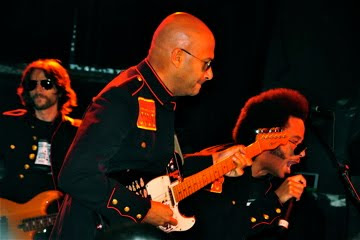 Tom has described the SSSC genre as "Revolutionary Party Music", and I don't think there's a better way to describe it. From the sheer poesy spat out by Boots, to the legendary guitar prowess of Tom, and the rock solid backing team of Kid Lighting/Dave Gibbs on bass, Carl Restivo on backing guitar, and Eric Gardner beating down the drums, the fact is there is going to be a party every time it's played, and it's serious enough that it could definitely incite a revolution. All you have to do is observe the fans FEELING it to know that. 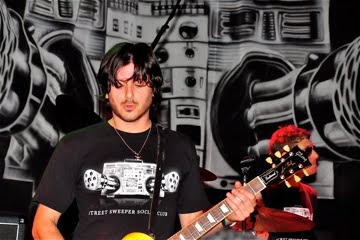 "Somewhere In The World It's Midnight" is a party rocker from SSSC's self-titled debut album featuring Boots dancing like he does - inimitably - and Tom doing intricate guitar tuner solo moves, but underneath all that is some dead serious subject matter and a lyrical microscope focused on social injustice that oozes from everywhere. 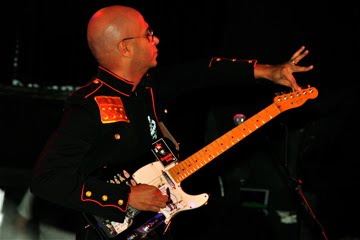 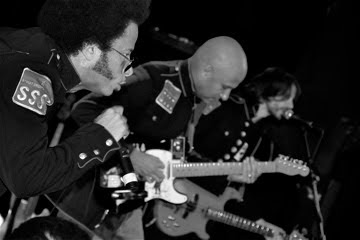 Whoa. From there they went right into their stellar cover of MIA's "Paper Planes", that is clearly a fan favorite. It ruled. Everyone danced along, and had their finger guns in the air shooting away at that part. Then "Scars" ... just as crazy, (as when Tom pulled out his guitar plug and played a solo with it on his hand) and just as lyrically smart and witty. 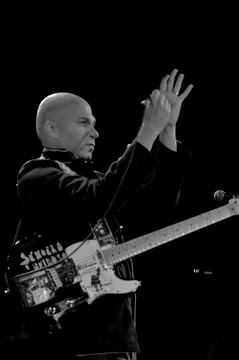 (But those words were not even close to crystal clear at The Roxy, and Boots' mike even went out a couple of times. The mix is often muddy. The Roxy could just use better sound all around, straight up. C'mon.) 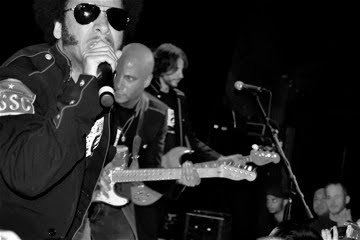 A tip: You need to just put on headphones and go for a run sometime and listen to what Boots has to say, as from his original days as part of The Coup, to his solo spoken word performances, to Ghettoblasting now with Tom, his words are some of the socially wisest and most acidly funny as I've ever heard.

"The Oath" from the first album was up next, and had Tom blowing a referee whistle, and Boots urging Mofo's to FIGHT back ... I pledge to get their foot off my neck, instead, I shall demand my respect, I'll fight even if I won't win ... Again, serious as hell, but packaged in the rock fun that by now had the band stripped down to their SSSC T's, and the crowd surging like it might hurt in there. 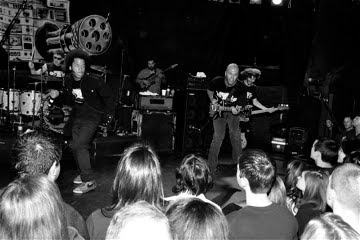 The first song I ever heard from Boots and Tom together was in 2008 on The Nightwatchman's Justice Tour, "100 Little Curses". I wrote at the time, after hearing it just the once, that this group was going to kick the collective ass of the people all around the world. Hearing it last night, I believe that to be absolute fact. Tom opened it with an almost classical sounding sickly fancy guitar intro, that had fists in the air even before Boots lit up the chorus of,

"All my people in the place put your fists in the air, All my down mutherfuckas get up outta your chairs, All my real down peoples we got love for you here, 'cept for that muthafuckas right there, get 'em!" 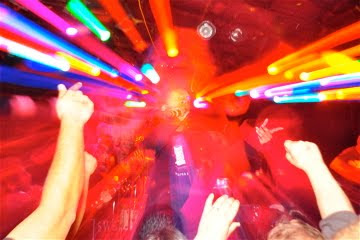 Man, I love that tune. So did the entire place. All Tom has to do at the completion of one of his solos is raise his arm, and every arm in the room goes up in support. And he earns it. The sweat was pouring off his head and down his nose as he made his guitar speak just as eloquently as the rhymes put together by Boots. It's a truly incredible experience every time, and it's evident on his fans' faces that they are experiencing true awe. BadASS. 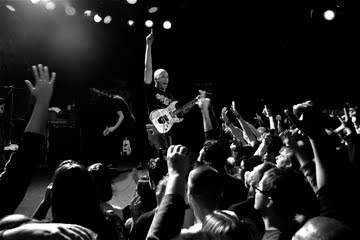 "Fight! Smash! Win!" and "Clap For The Killers" ("Double up for them gangsters, clap clap"!) was the next one-two punch. I swear I saw some NEW Boots dance moves, even as he struggled a moment with his mike inexplicably cutting out. These guys just BRING IT, every time. And you can see that they also MEAN it. Boots said then that nearly every show, someone says they really like the band, but the guitar player tries too hard to sound like Tom Morello. (Really, I've heard this a few times myself, hilariously.) To which Boots replies every time, "Our guitar player IS motherfucking Tom Morello!" ... and the house screamed in honor of that fact. To which Tom responded with his "Guitar Fury Remix" version of their song, "Promenade". 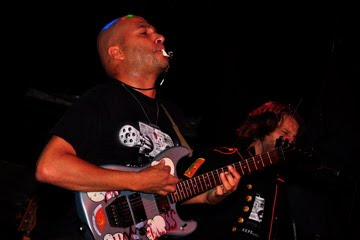 "Guitar Fury" is no hyperbole. This "Squaredance rap" song doesn't mince any words, and you really need to listen to them all, until they proudly wind up with, "My skin is black, my star is red!" But the real show stopper of this song is Tom's, indeed, FURY. His solo goes all over the place in gigantic Rage-y riffs, which last night wound up with the classic solo with his teeth that brought out camera phones, (and hankies for some, to weep with joy at what they just witnessed) and hoarse yells for more. 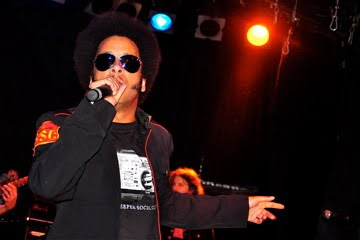 And they got one more, the conspiratorial, "Nobody Moves 'Til We Say Go", that builds from a whisper at one point, to the heaviest music mayhem riot imaginable. Or so we thought.

That was the last song of the regular set, but after they left and came right back, Tom picked up the mike and told the crowd how happy they were to be playing their first show in L.A. proper, for a hometown audience of whom Tom requested, "For this last song, I want to see everyone go absolutely apeshit from beginning to end!" Yeah, no problem there. Because the last song was their cover of LL Cool J's ever-dope, "Mama Said Knock You Out".

In this case, "Apeshit" meant that a full mosh pit swirled around the little Roxy floor in aggressive fashion, while Boots screamed "Oakland! L.A.!" over and over. Tom grabbed back the mike and just before his astounding feedback finale solo, said, "Everyone from my 87 year old Mother (Mary, who STOOD and rocked at the rail above the floor for the entire set!) to this Indie Rock kid at his first show down front, I want to see you all JUMP! ELEVATE!!!" 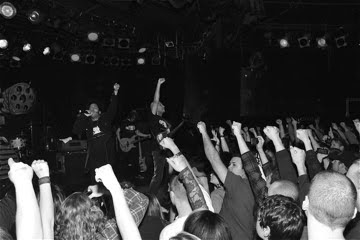 And ELEVATE is exactly what we all did in there last night. Not just physically off of our feet, which certainly happened, to a person. But much more importantly, we elevated in heart, mind, consciousness, and spirit. That's what great music, raw wisdom, eye-opening commentary, camaraderie with friends and strangers alike, and yeah, even some good mosh bruises reminding you that you LIVED hard last night, will do for you. Every time.

Street Sweeper Social Club is a club that's basic tenets are to:

Now that is a club everyone should want to be a part of. And as evidenced by the beaming faces streaming out of The Roxy last night, not just be a part of, but really know what it means to be elevated ... right off your feet.