My two favorite social distancing activities are nature and art, and luckily, there are ample opportunities to partake in both here in The Twin Cities, where I have been riding out the pandemic. The Walker Art Center has put up a new exhibition called Designs For Different Futures, that is an especially great show for these times, as we have to figure out new solutions for going forward in this world. Have. To. 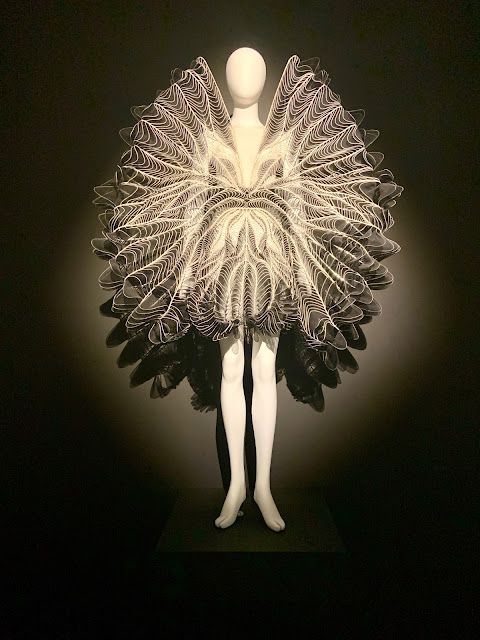 The artists at The Walker are full of good design ideas, so many that I dared to start having a little bit of hope for the future again. There was a disembodied female voice from future narrating things in the background, lending it all a bit of a 2001: A Space Odyssey vibe. In fact, the first piece we saw even looked like a little spaceship (there were little projections inside). 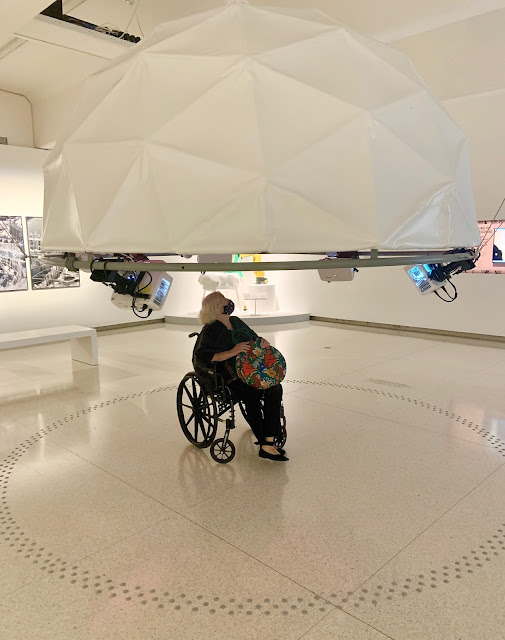 In these Covid times, it makes a lot of sense to have a graphic on the floor instructing one how to assess the risk of a handshake. Comical, but also deadly serious - especially when there's a jackass president who lies about the risks. K, moving on ... 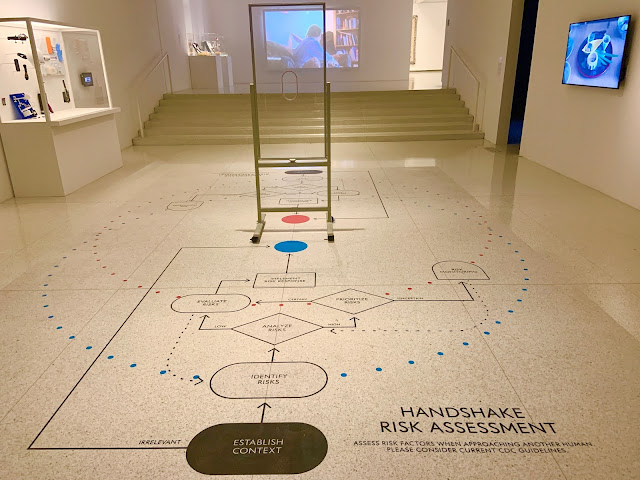 I was very excited to see the Svalbard Global Seed Vault model on display, as I've been following this project since its inception in 2008. Designed by Architect, Peter W. Soderman, the Svalbard Seed Vault houses seeds from around the world deep in a massive, futuristic space deep within a fjord. 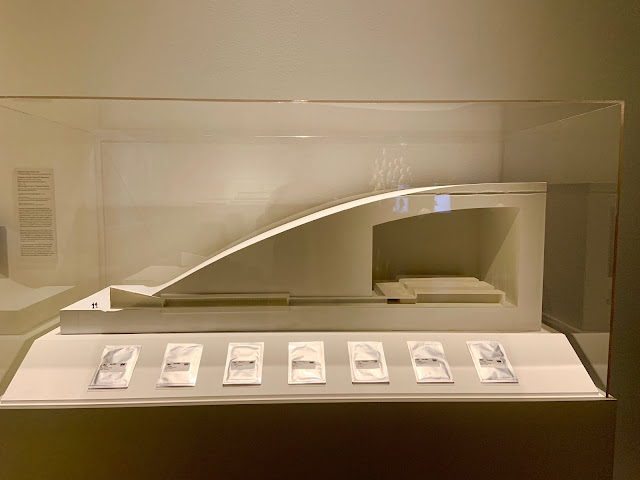 The vault is like a giant seed library, with countries sending inn their native seeds in the event that a natural or man-made disaster would render a crop extinct ... they've now got backup here in Norway. (Of course, they thought it was invincible, but the vault has already been breached due to the ongoing Climage Crisis. Please CARE!!!) It's all pretty smart. Pretty cool. 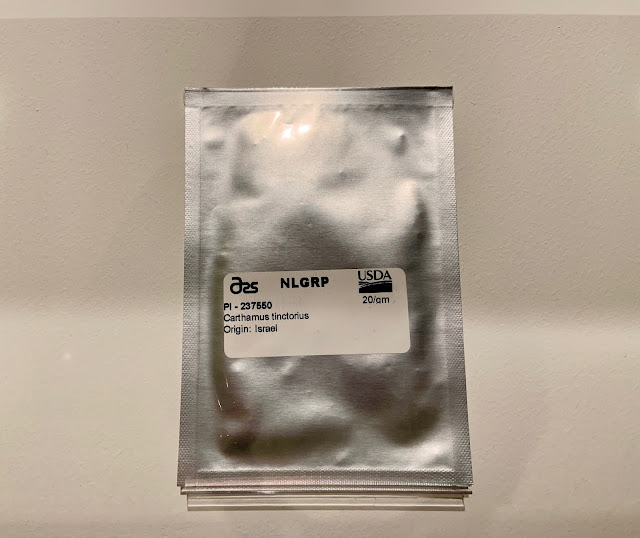 One of the things I LOVED, but that you can't really see is the Future Library, 2014-2114 by Katie Paterson. Norway has a lot of cool things going on, because Paterson's library is there too. She planted 1,000 spruce saplings outside of Oslo. In 100 years, they will be felled to make paper to print books that are being written for the library, one per year by 100 different authors ... and most of us will not be around to read them (Frankly, I'll be surprised if anyone is around due to the Climate Crisis that we're really doing nothing of consequence about, very sadly). The first new book is by Margaret Atwood, of The Handmaid's Tale fame, sending her manuscript off into the future. I'm madly in love with this idea ... and trying to figure out how to read any of them! 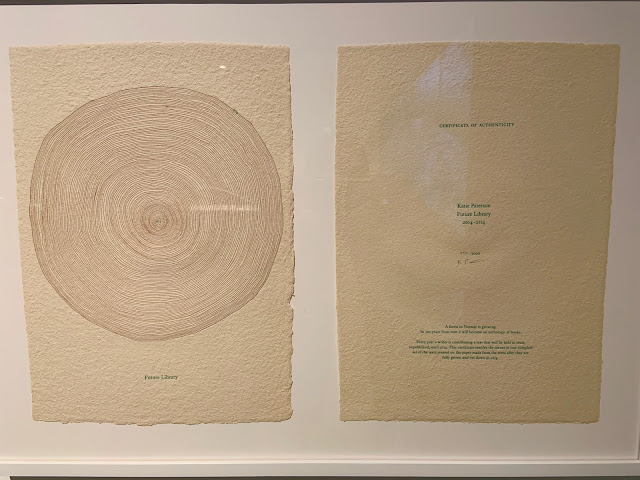 Perspire, 2018 by Alice Potts shows ballet slippers soaked in human sweat that has crystallized and been dyed with red cabbage. Crazy. This is an attempt to show how in the future our accessories and clothing will be highly personalized ... or something like that. It looked cool. 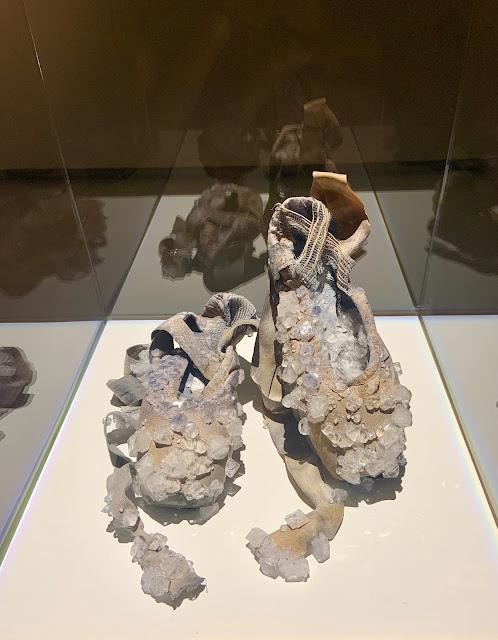 Looking even cooler was my favorite part of this exhibit, which was a series of dresses made from either 3D Printing or seaweed ... all materials that will definitely be in play going forward in our world, as our current fashion practices are simply not sustainable. My very favorite piece in the entire show (that opens this story above) was the show-stopping Syntopia Finale Dress, 2018 by Iris van Herpen. Vogue described van Herpen as "Fashion's chief scientist and perhaps also its leading futurist," and that surely shows in this jaw-dropping creation. It says that she based the pattern for the laser-cute stainless steel and black silk dress on the soundwaves of birds in flight, and that's all I had to hear. LOVE IT WITH MY WHOLE HEART. And want to wear it so bad. To something. Anything. Cheers to you, Iris van Herpen! 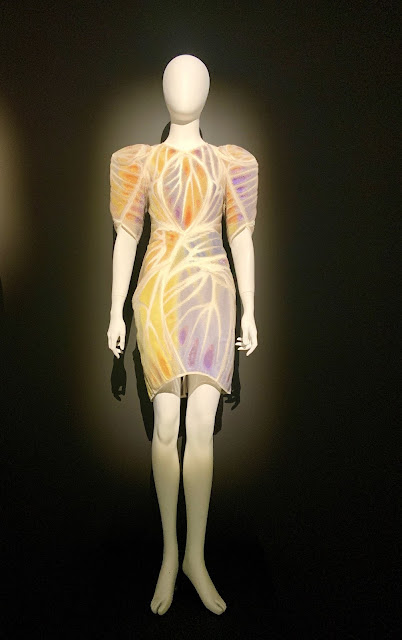 Also spectacular, though much more earthy, is the Kombukamui Dress, 2018 by Julie Lohmann - made from seaweed and rattan! She liked how seaweed gets big and leathery when wet, and a totally different character when it dries ... and sees seaweed as a ton of design possibilities for the future. 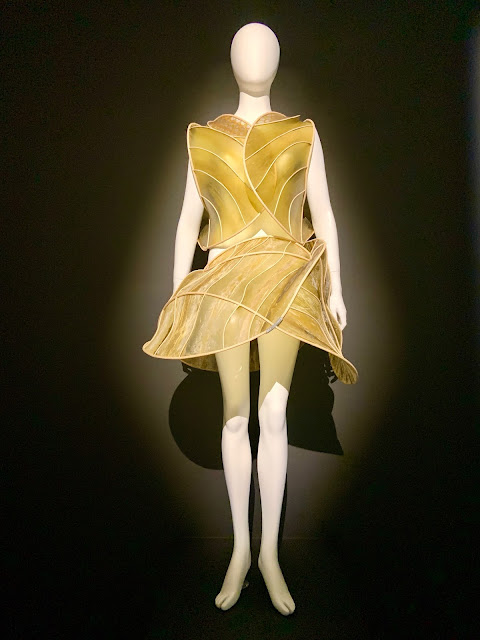 There was a really cool piece called In Plain Sight, 2018 that tracked the use of electricity around the world ... and how inequality around the globe affects peoples' access to it. The number one thing people need more of today is empathy. All the bad things happening now would be so much better if people could only find their empathy. This screen really drove that home to me yet again. 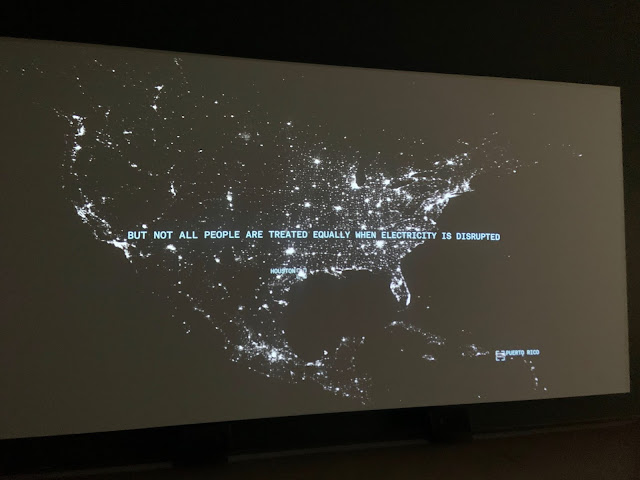 There was an enormous bulbous sphere in that same room called Another Generosity, 2018 that changed colors and kind of seemed to breathe. It's filled with water and air (the main - highly endangered - elements of life on Earth, that reacts to tiny changes in its environment - much like our real Earth does, and why we need to be so  much more gentle with it. Please. 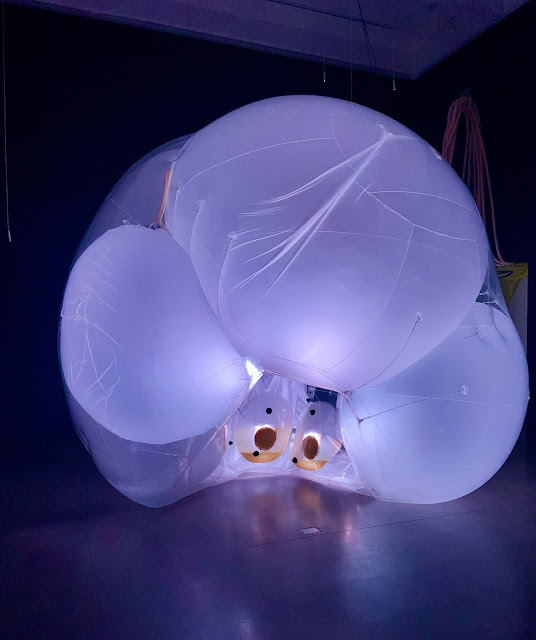 I can't remember what this went with or who did it, but I agree with pretty much every statement within: 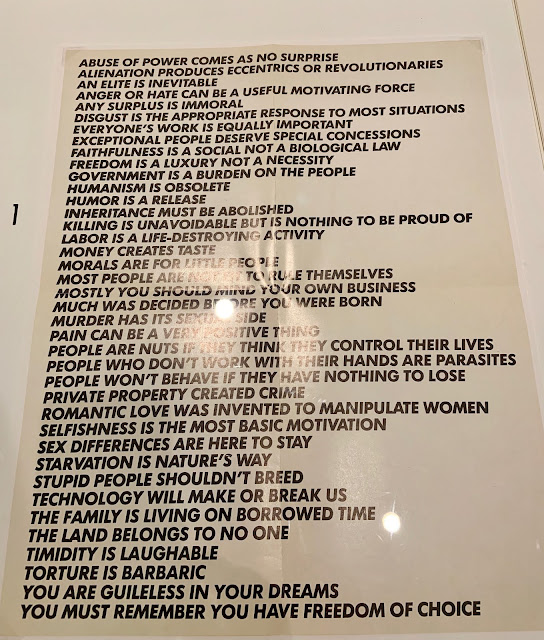 There was a Republic of Estonia e-Residency Kit, 2014 by the Republic of Estonia. In 2014, the little country introduced the concept of e-Residency, offering anyone the opportunity to be an e-resident. It doesn't grant tax residency or citizenship, but it does let you conduct business and use their public services, etc. Borders fall away (all man-made anyway, so I don't really believe in them), enabling a free flow of ideas and resources. Pretty cool. 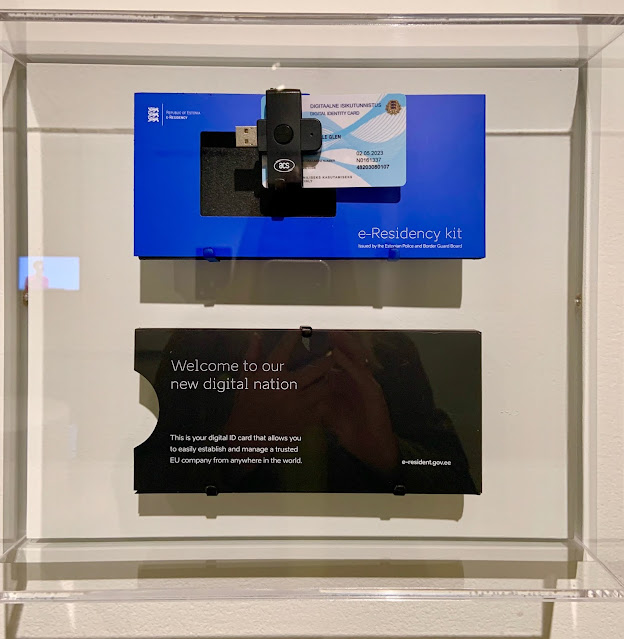 Similarly, Infinite Passports, 2014-2017 by Giuditta Vendrame and Fiona du Mesnildot proposes a system where members could exchange passports temporarily, as well as their geopolitical status. This would allow people to migrate about freely without permission from any government. I'm down with that. 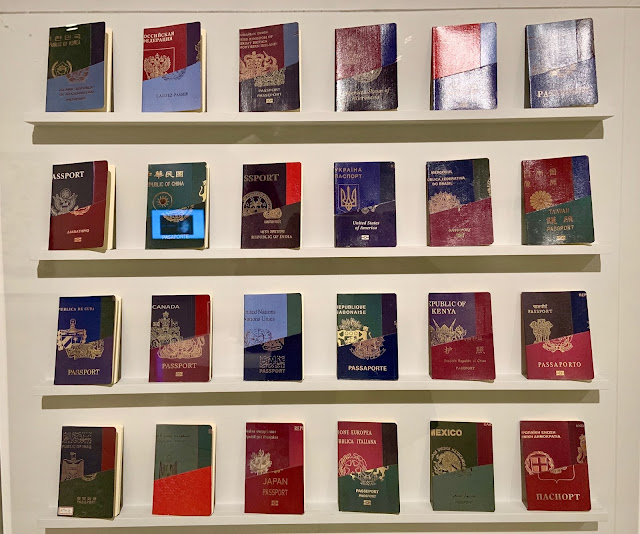 The Handmaid's Tale red gown featured prominently in the middle of the gallery suggested an eerie future - especially if this joke of a Supreme Court nominee gets confirmed. It's about design for the future ... but I don't want any part of that kind of future - and it's up to all of us to prevent it. I feel sick just thinking about it  ... 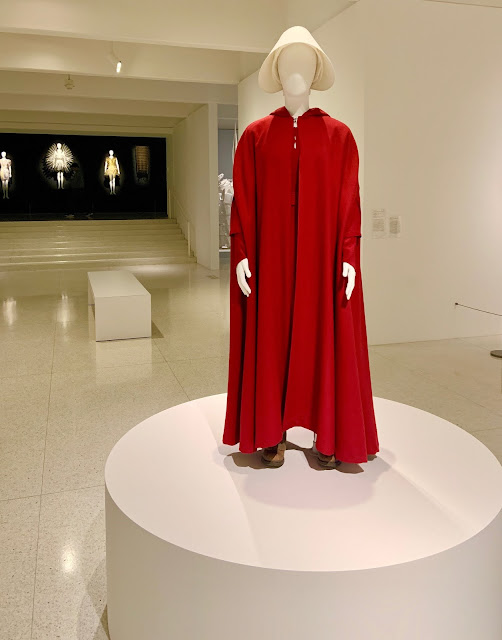 There was an area devoted to accessibility in the future, featuring the PhoeniX Exoskeleton, 2011-2017 by Homayoon Kazerooni. It's designed to give people with mobility disabilities and spinal cord injuries the ability to walk on their own. Activist Ace Ratcliff was quoted about it, saying, "A utopia is not a world where disability is a problem that's been solved; rather, it's an inevitable expression of genetic variance, and disabled humans are not just welcomed, but fully included." Now ... that's a great statement, but the irony was that my Mom and I got stuck in the tiny closet of a handicapped lift that brings you to this level, for like 15 long minutes, as the staff scrambled to get us out. It was broken, and we couldn't get out, so had to go back up to get out there (Thank God). Mom was therefore unable to access this level of the museum and was never able to see these works that were really interesting for her, having lost her leg and being disabled herself. I'm thinking the Walker should maybe invite her back for free now ... because she didn't get to see this cool prosthetic leg of the future! 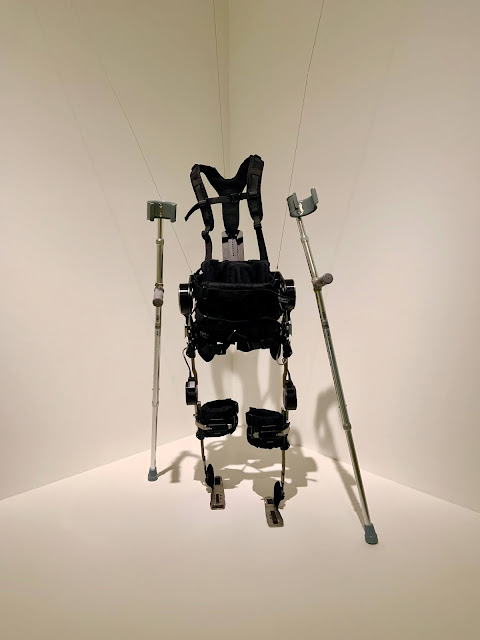 Stance, 2016 by Leslie Speer, Anthony Ta, Brendan Ngo, and Darren Manuel was made from saddle leather, fiberglass, skateboard deck (!), maple veneer, and silicon. It can be adapted to the growth of its user over time (COOL - because we just came from another leg fitting for Mom and it's a major hassle!). It uses regional materials, so its parts can be customized and assembled locally for less than $40! That would also be cool as Mom's new one will be upwards of $1,800 - that insurance will not pay. UNBELIEVABLE still how bad our country's healthcare system is, It really is, and must be reformed. Moving on ... 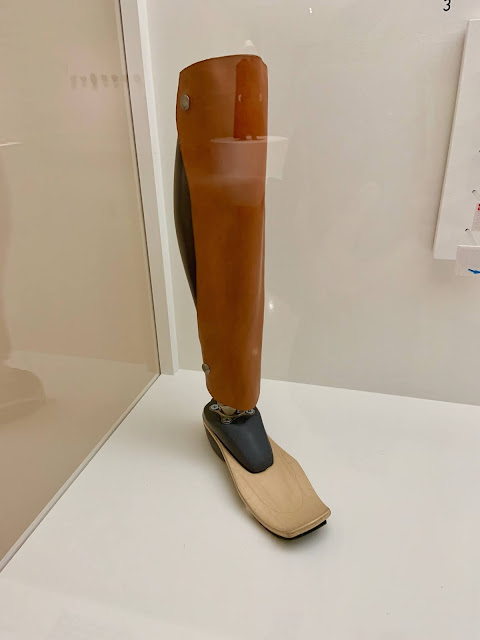 ... to Stranger Visions, 2012-2013 by Heather Dewey-Hagborg. This work addresses genetic surveillance and the ethics of accessing another person's genetic information without their knowledge. Dewey-Hagborg collected chewed up chewing gum from around New York City, and worked with a lab to extract the DNA. In a process called "Phenotyping", she took their genetic information to make portraits of what the person who chewed the gum most likely looked like. TRIPPY. It was very Game Of Thrones Man with No Face-y. 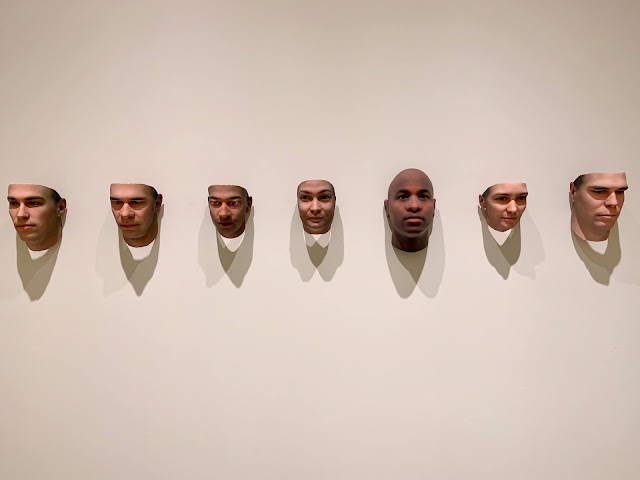 There was so much to see, and you'll want to see it, as I've included very little of the entire show here. There are other great exhibits happening at The Walker now as well, like Don't Let This Be Easy, celebrating the work of women artists and feminism (The Walker does a great job of being socially timely). All of the works were great, but I was really struck by this file cabinet with shirts in it, saying things like, "One of the ways people hurt me is ...". Please just trust me that you want to see this whole room for yourself. 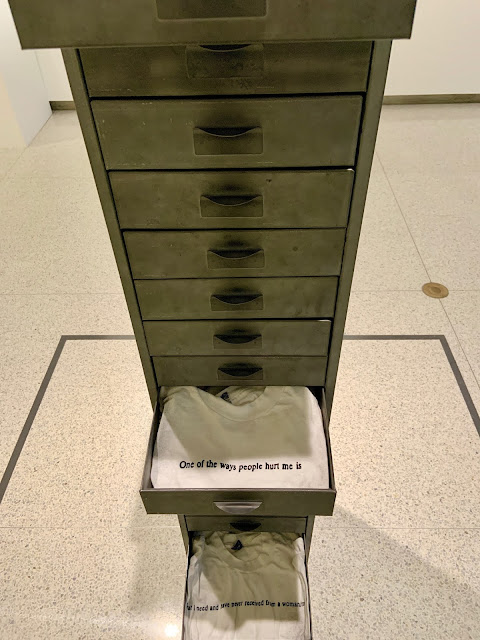 You have to love the Selection from Don't Look Back, 1999 by Fiona Banner from the permanent collection. Banner has screenprinted transcripts from the classic Bob Dylan documentary, and it's great as a whole ... 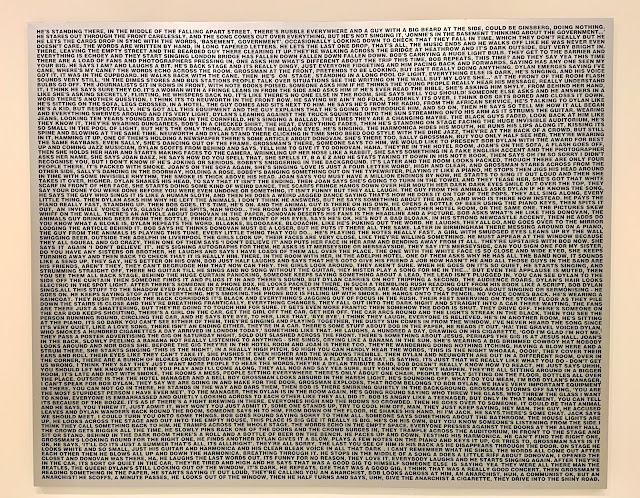 ... and then fun to zoom in on to remember that part of the movie and how cool it was. Is. Again, there is SO much to see and our time was running out, so I urge you to go and explore for yourselves, as it's a really good social distancing activity, as we crossed paths with very few other people in the galleries. 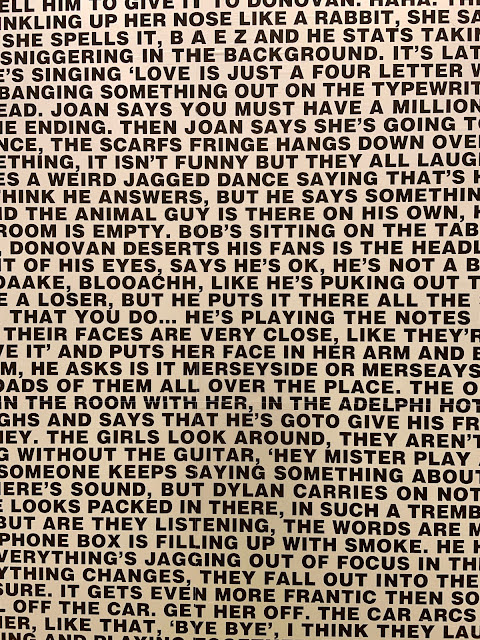 Racing by a few walls from the permanent collection, I was delighted to see a piece (I Got A Job To Do, 2003) from our Venice, California friend (and Cali Loco!) Llyn Foulkes! That made my heart happy, as I've been missing Venice SO much, and it's nice to see a little part of it even here in the North. 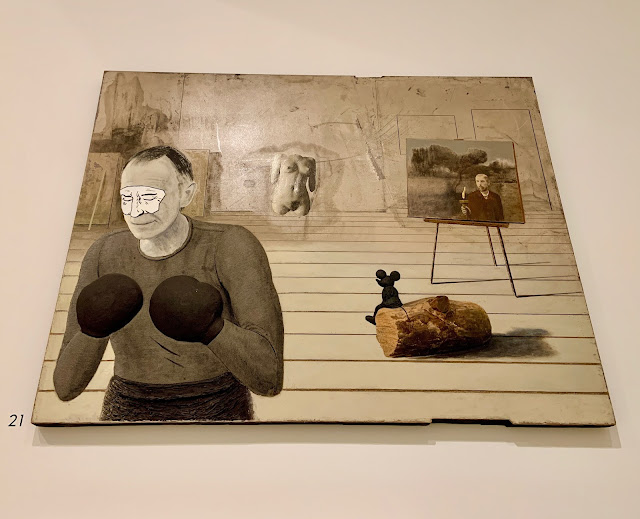 There is also an exhibit of Jasper Johns prints from 1960-2018. Our favorite from An Art Of Changes was his Flags, 1965. It had one of those optical illusion games, where you stare at the white dot on the flag for 15 seconds and then look at the plain gray panel and you can still see the flag there in your tripping out retinas. 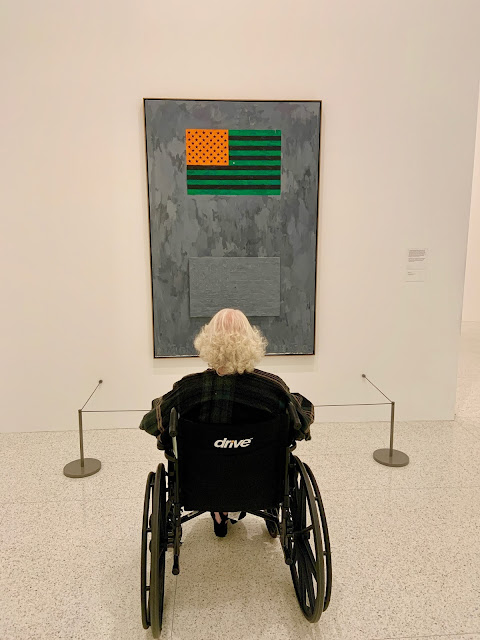 That coolness was a great finale for our wonderful day at The Walker. It gave us a lot to think about as we go forward in this world, and it was a little reassuring that there are such smart, creative, talented people hard at work around the globe making designs for all of the different future possibilities we may face. 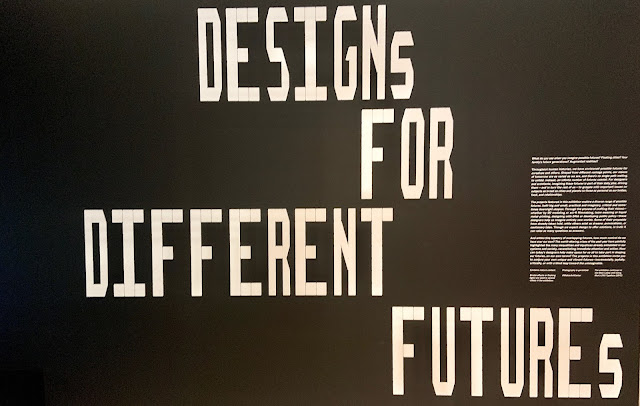 I've said it many times before, but art that makes you stop and think about ways to make our current world better is the very best kind. And this show is full of that. Please go, please think, and please enjoy!