A Violin Vigil For Elijah McClain At The Minnesota State Capitol - HalleluElijah!

There was a violin vigil for Elijah McClain last Saturday at the Minnesota State Capitol, and it was beautiful. McClain is the young man who was murdered by Aurora, Colorado police in one of the very most disturbing police murders ever committed. Easily one of the most kind and gentle souls ever to live on this planet, McClain spent his free time playing his violin for shelter kittens. His last words to the police and EMTs that were busy murdering him were absolutely crushing ... 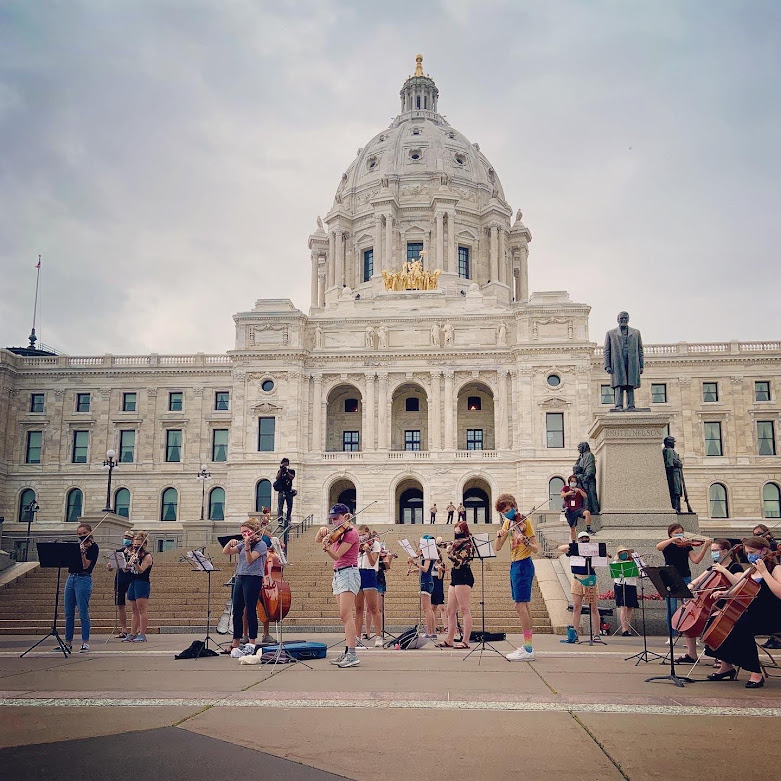 "I can’t breathe. I have my ID right here... My name is Elijah McClain. That’s my house. I was just going home. I’m an introvert. I’m just different. That’s all. I’m so sorry. I have no gun. I don’t do that stuff. I don’t do any fighting. Why are you attacking me? I don’t even kill flies. I don’t eat meat. But I don’t judge people, I don’t judge people who do eat meat. Forgive me. All I was trying to do was become better... I will do it... I will do anything. Sacrifice my identity, I’ll do it. I'll do it. You all are phenomenal. You are beautiful and I love you. Try to forgive me. I’m a mood Gemini. I’m sorry. I’m so sorry. Ow, that really hurt. You are all very strong. Teamwork makes the dream work."
Now, if you aren't destroyed by that, you don't have a soul or a heart yourself. So, there was no question that I HAD to be there for McClain last Saturday, since no one was at the time of his murder. The event had been re-scheduled from the previous Sunday due to weather, and it looked like rain on this day too, but there were still hundreds that showed up to pay their respects to a life taken far too soon. 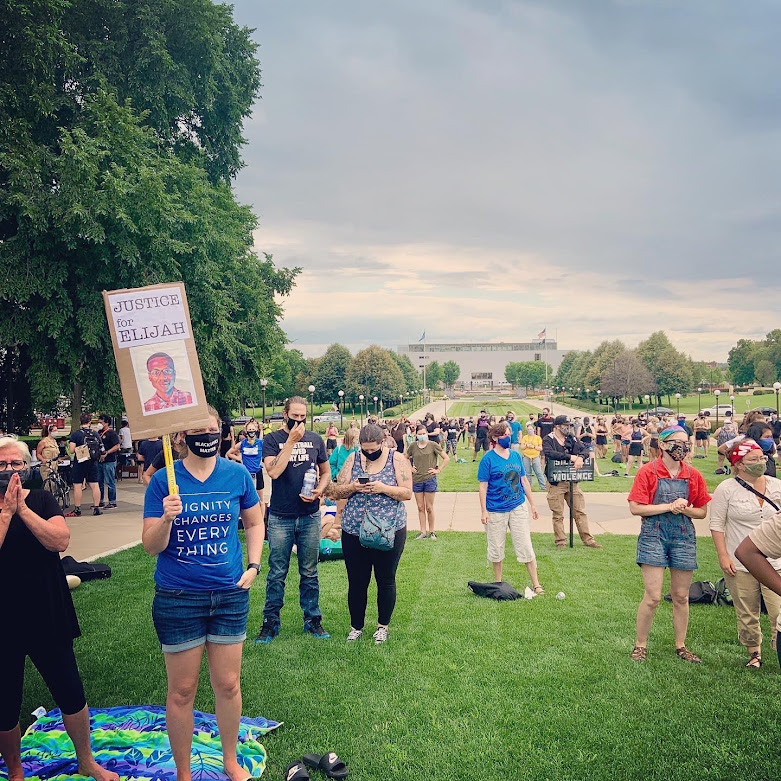 I was startled to see a big crowd with no masks and giant U.S. flags yelling about whatever, and soon figured out that it was a group of MAGA fools there to protest about wearing masks. UGH. They're all so idiotic and heartless that I don't even want to mention it ... but they were there, trying to disrupt a gathering in honor of someone who was murdered for absolutely nothing by the people meant to protect and serve us. But these mouth-breathers thought they'd mar the proceedings by exposing themselves to the Corona virus. So free of them. It's sad when the sight of our country's flag now makes me sick to my stomach, because usually these days it's being held by someone who actually wants to destroy our country with their ignorance. I walked right through the middle of these fools with my BLACK LIVES MATTER shirt and my mask in full effect. No one said a word to me directly - but I almost wish they had. 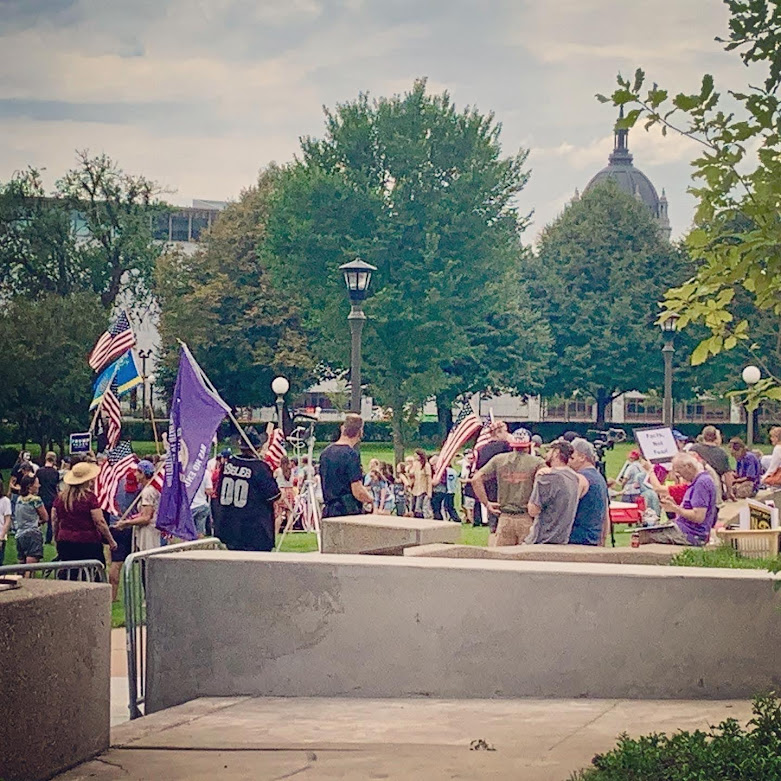 I thought I was late to the proceedings, but there was just a big crowd (very socially distanced and masked, it's important to note - good hearts also seem to have smart minds) kind of sitting around waiting. Booths were set up to buy merch, register to vote, recall Mike Freeman (YES!), and sign a big banner to send to the family of Elijah McClain so they may know that people all over the world care about their Elijah very much. 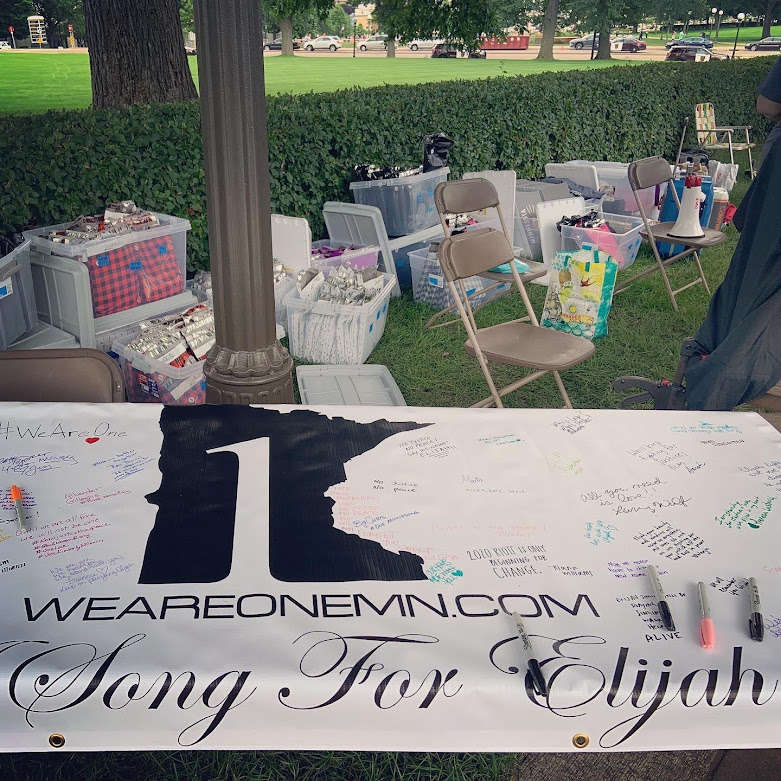 There were a few speakers, from WeareoneMN.Com (the organizers), and we got to hear from Courteney Ross, the fiancée of George Floyd. What she said really stuck with me, as she said she'd been all fired up to go confront the Trump people across the street, and really get into it with them. Then she realized that we get nowhere with hostility (as they show us every day), and that if she were to go over there and find common ground, that would be the way to heal and go forward for us all. How full of grace to feel like that when the love of your life has been murdered by police, there has been worldwide outrage, and these people still come and try and add to her pain. I need to be more like her - and told her so afterward. 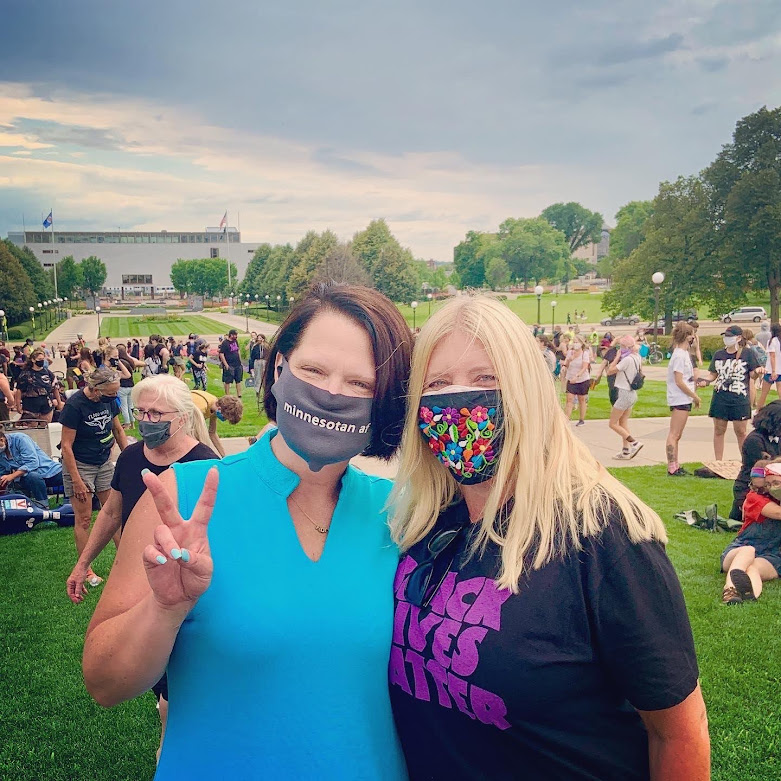 There were over 50 violinists and cellists there, and as rain started to sprinkle down, they gathered in front of the steps of the Capitol to play three selections for Elijah McClain. They began with "Hallelujah", and though I've heard it enough for many lifetimes, it was heartbreaking and gorgeous as these players did it for Elijah. Sniffles could be heard all across the lawn, as we were all thinking about this gentle young man, and how he didn't deserve to die, and MUST get the justice he deserves. In fact, just yesterday there was another incident in Aurora, CO, where their AWFUL police forced a Black family - including a little girl in a pink crown! - to lie on the hot pavement while they bungled about figuring out they had pulled over the wrong vehicle - an SUV vs. a motorcycle at that! This murdering department can obviously not be reformed, and MUST be dismantled - as well as have all of those brutes locked up FOR GOOD. My blood just boils thinking about it.
Back to the calming music for Elijah ... the musicians next gave us "Stand By Me", and then finished with "Somewhere Over The Rainbow", and it seemed at that moment that a rainbow would actually be likely, but not this time. It was incredibly touching, though brief, and I'm very glad I was there to show my support. I made a new friend at the Recall Freeman booth, a lovely woman who was wearing a shirt that said, "I can't keep calm, I have a Black son". Now, if that doesn't hit home with people, I don't know what will. The big thing missing for a LOT of people who want to hear only themselves talk is EMPATHY. People need to step out of their own biased brains for a moment and just think about what it would be like it this was YOUR son. If it was YOUR family. Once people can gain even a tiny bit of empathy for someone other than themselves, you start to have a working society for everyone, you get the justice that is deserved, and you fulfill the original intent of this country, which really was LIBERTY AND JUSTICE FOR ALL - not just you. 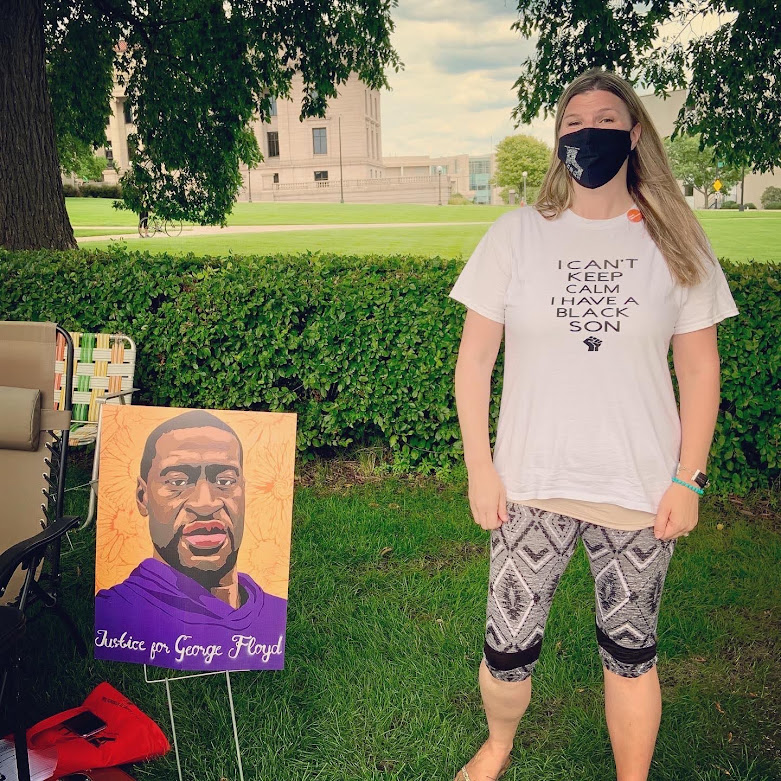 When the music was over, there was a long line to sign the banner for the McClain family, and a lot of smaller groups breaking apart to talk, plan, organize, and hope - for a better future for us ALL.
Please PLEASE sign the petition that demands justice for this dear, sweet soul. PLEASE SIGN TODAY!
Thank you, thank you, thank you ... and I hope you know how much people care about you, dear Elijah.