Terry Willis completed his one thousand mile walk from his hometown of Huntsville, Alabama to the site of George Floyd's murder by police at 38th and Chicago in Minneapolis yesterday afternoon, and was met by throngs of supporters who had followed him along his arduous journey. 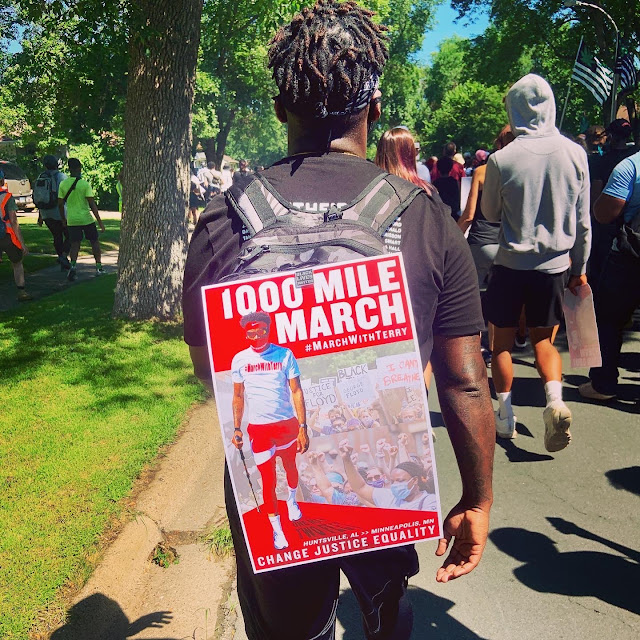 After some delays due to weather and body recovery, Willis joined a waiting group at the Mall of America in Bloomington. Marchers held signs and wore t-shirts (and almost every respectful citizen was wearing a mask!) in support and cheered Willis on for the last seven miles of his trek to gain awareness for change, justice, and equality. 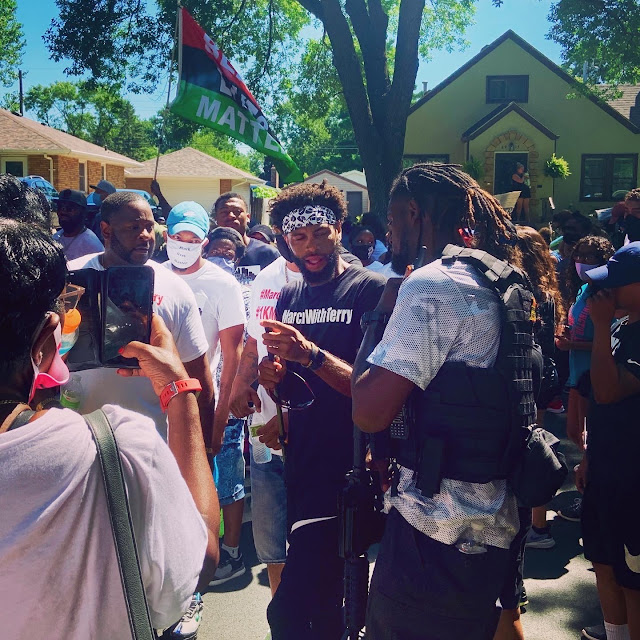 As there had been threats to Willis along the way, the organizers never gave out his exact location, so it was a bit of sleuthing to find out where they would exactly be to join the march if you hadn't been at MOA on time (like me). I was driving back from getting our morning coffee when I saw people sitting on the curbs of 12th Avenue in Richfield, and a police presence at my old middle school on 70th and 12th. 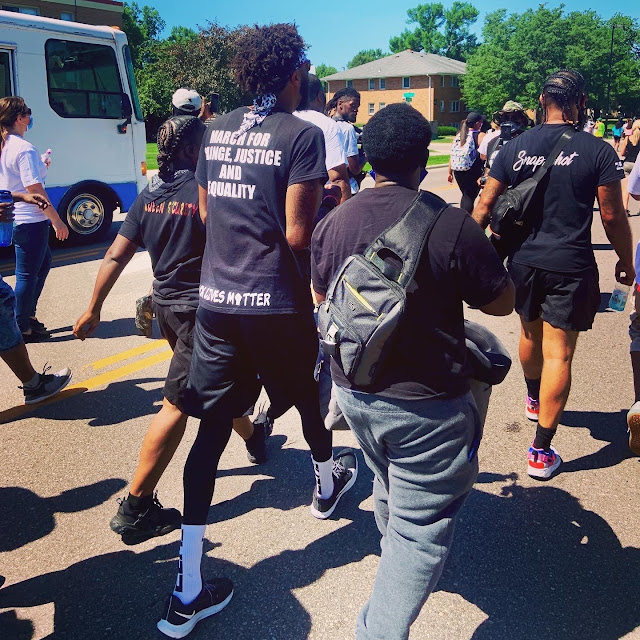 I raced home to get my brother and we raced back just in time to join Willis for his march through Richfield. I was so proud to be standing up for social justice and systemic change in my hometown, marching down 12th and up 66th to Portland, with supportive honks from backed up cars and shouts of solidarity from the people lining the streets. There's an old spirit chant that went "We're from Richfield, couldn't be prouder, if you can't hear us, we'll yell a little louder!" - and that's what it felt like marching alongside this inspirational man whose story I'd been following since his walk began on June 2nd in Alabama. (This feeling would go away in the evening - read to the end). 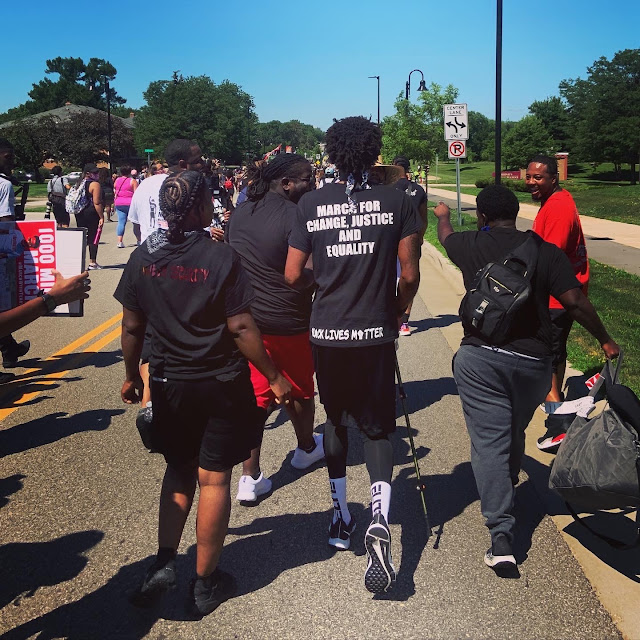 "Say his name!" "GEORGE FLOYD!" and "One Man! TWO FEET!" were a couple of the chants along the way, and the day could not have been more beautiful for a walk for social justice. Willis kept an amazingly fast pace going, for a man who had been walking across the entire country. Also impressive was the way he was so concerned about everyone else. He darted around in the crowd, asking if people had water, giving hugs to people that got emotional in his embrace, as they could feel the gravity of what he had endeavored to do, and now he was real and in their arms. Pretty powerful stuff. 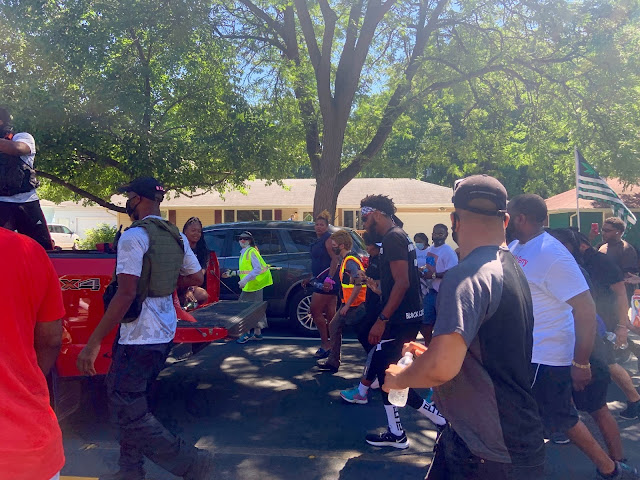 When the group turned toward Minneapolis, Paul and I raced back to our car, went home and grabbed our Mom, and took her to do a drive-by farewell to the Pastor of her church, Nokomis Heights Lutheran, who was having a last day picnic there at 53rd and 10th. We drove by and waved our good wishes, and then saw that the Willis march was going by two blocks away at Chicago Avenue! 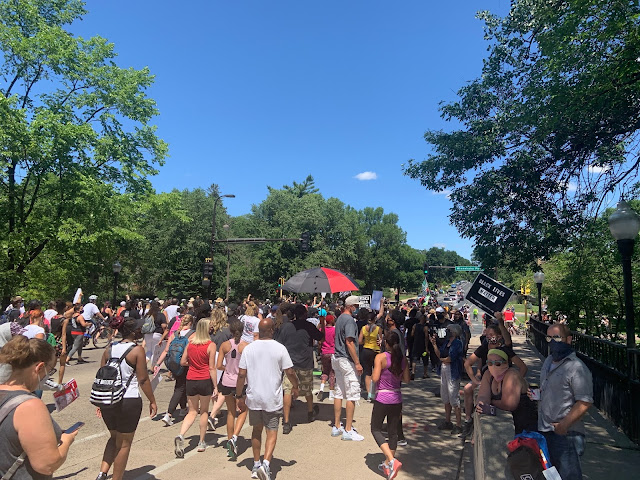 We cheered them on for a couple of blocks, (and were a little surprised to see a guy open-carrying a machine gun, but then there had been credible threats, so ... sigh. This world.) then drove to 38th and Chicago to the George Floyd Memorial where Willis was to finish his long journey. 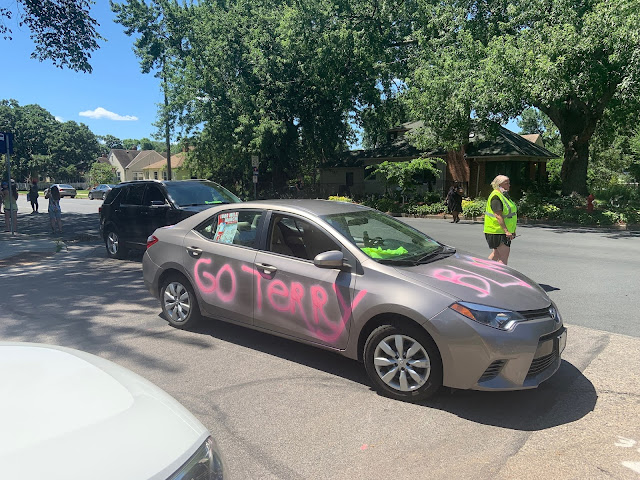 The intersection was packed with people, so we tried to stay on the outskirts because of Mom and the pandemic, and people were very respectful about giving she and her wheelchair the space she needed. The grills were cranked up with long lines for the free fare, and the usual angels were there passing out bottles of water on this hot day. The flowers had been refreshed after the storm the night before, and it was once again a beautiful scene of respect and community coming together as one in the name of equality and justice. That's just honestly what it feels like every time you're there, and I hope all Twin Cities residents have been by now. It's something else. 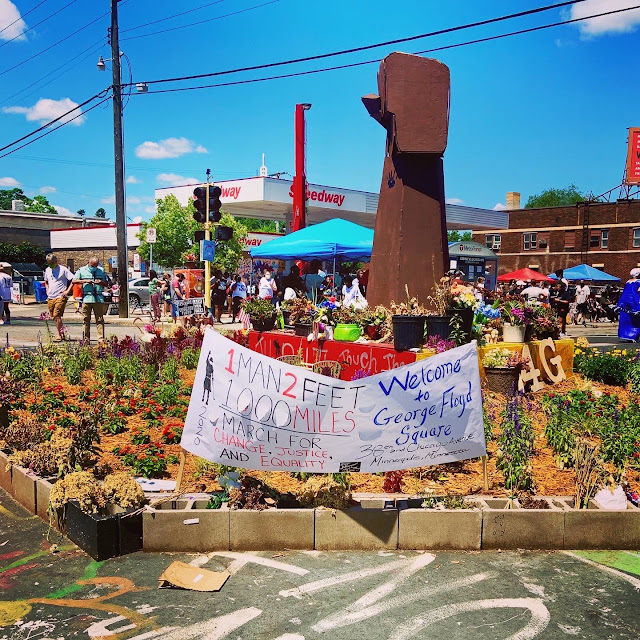 It didn't take long until we saw the glimmer and heard the din in the distance of the Willis march approaching. More and more people poured into the streets as the march passed into the intersection, and more than a few tears were shed when Willis finally approached the very spot where George Floyd had been so ruthlessly killed by monsters meant to protect us. Out of breath somewhat himself, the moment held a whole lot of weight when Willis was now at the destination that had been his focus. Cheers erupted, and then went silent as a trumpeter climbed up above everyone and played "Lift Every Voice And Sing", and another emotional memory was made.


Families stood together, friends stood side by side, mothers pushed their children in strollers, we pushed our Mom in her wheelchair, and everyone there knelt together as one with fists raised in silence as Terry Willis knelt as long as he could after such a long and hard physical feat. More cheers filled the blue skies then, as Willis took the mic to address the crowd ...

Speaking to how he was just a regular guy, not a celebrity (though he was certainly treated like one, deservedly), and he just saw something terrible that he was compelled to do something about, so he set out as one man, two feet and walked for change. Any one of us could do the same, and any one of us can do SOMETHING in our own lives to effect change. My own nearly 80 year old (birthday next week!) Mom is right now in the living room reading "How To Be An Anti-Racist" - THAT is something to effect change, because then she'll talk about it with her 80+ year old posse, and they begin to think differently, and that HELPS. 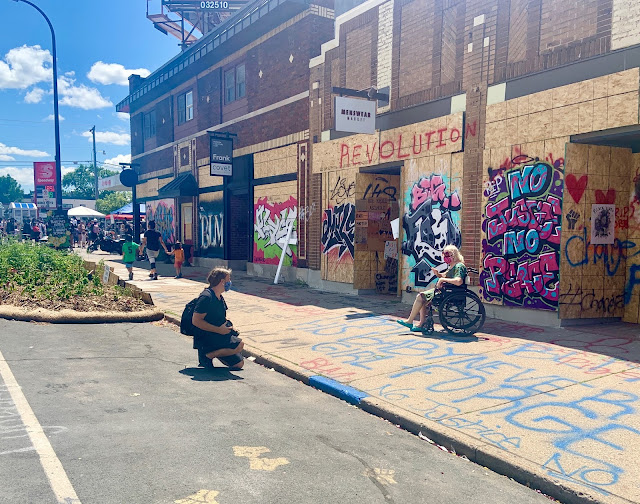 Once Willis thanked the crowd, he was eager to get home to his own family and his own bed, and the intersection at 38th and Chicago turned once again into the street party that it has been on most days since George Floyd lost his life there. We now know that this time WILL be different, and that systemic change is ACTUALLY in the works. You can feel it. 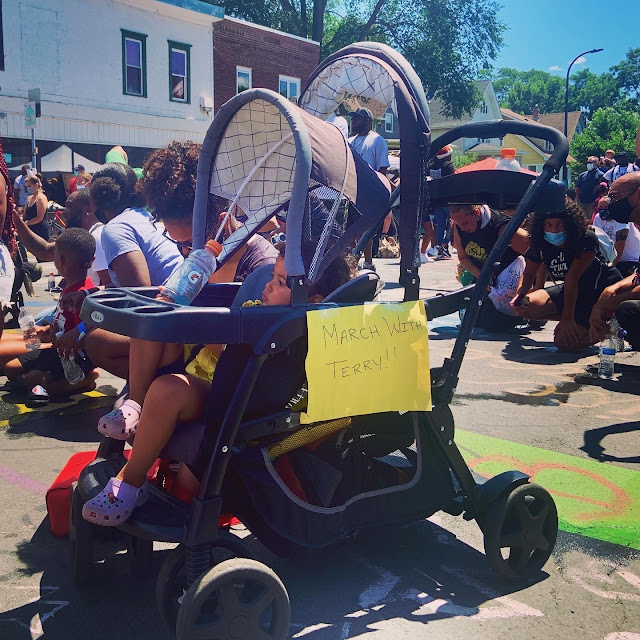 My family left to get Mom home as we are a bit leery about having her out in the mix at this stage of nobody knowing what's up with this pandemic, but we were all so happy to have been there together to see this historic and triumphant feat completed by Mr. Willis, and once again by surrounded by so much good will and positivity for a better world. We were buzzing about it all day after, and I thought I'd share the Richfield part on the "I Grew Up In Richfield" Facebook page so people could see how cool it had been in our hometown that day. I was certainly not prepared for the bigotry and vitriol that followed, and I'm still reeling from it. "That's BS!" "George Floyd was a thief!" "This kind of thing doesn't belong on this page!" were some of the awful comments in reaction to a short video of their community members marching along with a man who had just completed a huge, triumphant personal victory that was also global news. And now their backwards behavior will now also be a part of this global story. Willis had people cheering him on via his Facebook and Instagram feeds from around the world ... but Richfield, Minnesota residents didn't want to hear about it on their community page. UNREAL. I'm crushed. I've been back here taking care of my Mom for a year now, and I know I've been living in the Venice, California bubble for a long time, but I never thought there would be such racism in my now very diverse hometown. THEN I see that my post had been taken down, due to so many complaints about a Black man marching through Richfield for social justice. I'm disgusted, and of course, will no longer have my name associated with that intolerant page. The Administrator woman didn't bother to send me a message, but she sent Paul one for his post that said it was for people who grew up in Richfield, not politics. Well, guess what, lady? People are STILL growing up in Richfield, and it's sad that the one they're growing up in is like this, especially when old, white Spartans are hardly in the majority in town anymore. 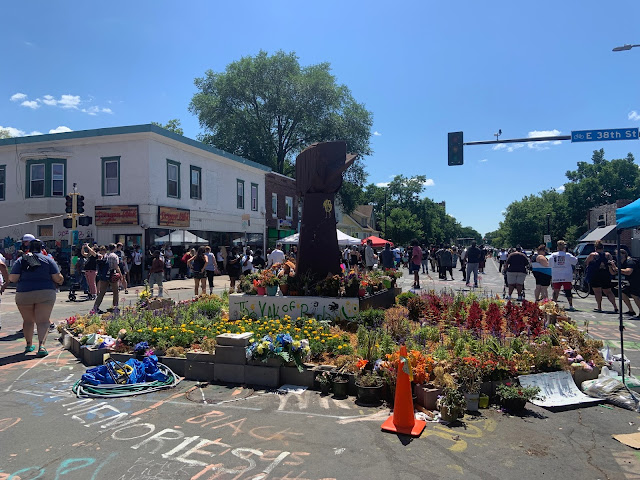 I don't want to end on a negative note to what was such a positive and beautiful day, so I'll just say to every complainer on the Richfield page - I hope you can manage to GROW, because your way of thinking is past its expiration date. To Terry Willis and all of his supporters - WOW! POWERFUL! What a feat! CONGRATULATIONS! LOVE! SOLIDARITY! UNITY! We WILL make the change this country so clearly, so desperately needs. We have to. 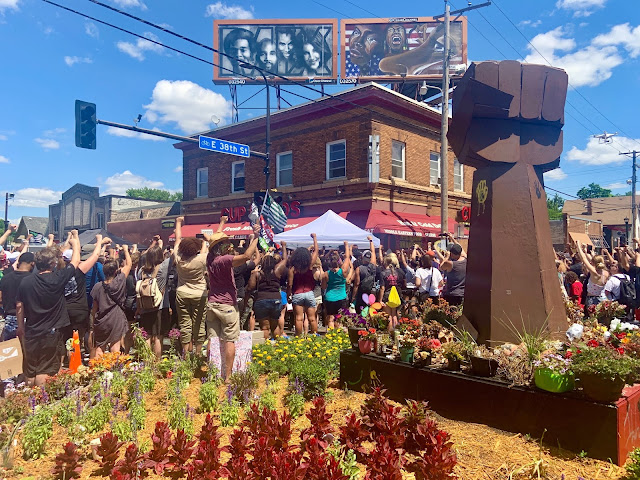 ONE LOVE, EVERYBODY! Even you, old, white Spartans. May you join us in 2020 someday.