A Dignified Birthday In South Dakota!

2020 has altered a LOT of plans, and that's what happened to my birthday plans this year, like everyone else. As it's been an extra difficult year for me and mine (like everyone else), I really wanted to get away and do something special ... but that was not to be. Or was it? A closer, actually do-able plan took shape, as I've been dying to see the statue Dinity: Of Earth and Sky, located in Chamberlain, South Dakota. 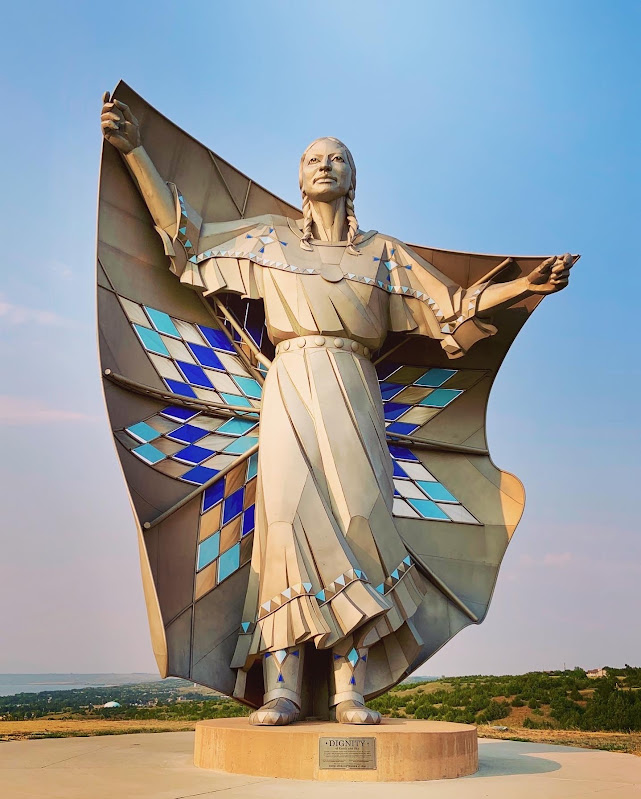 I booked a room and put Mom in the car, and we set out to drive hours across the dusty, hot plains to look at a statue at a rest stop on the 90 freeway overlooking the Missouri River ... and it was totally worth it. I actually got a little emotional when we pulled up, as even just the word DIGNITY is so loaded to me right now. I thought it was funny to say "I'm aging with Dignity!", because I really want to (A lady doesn't share her age, but just know that I could legally be President. And probably should be.). But also the Dignity of our Native people, who have been so mistreated in this country, but are still so beautiful and resilient, and yes, DIGNIFIED, that it's very emotional for me. The racial unrest in this country also came to mind, as well as my Mom who has handled losing her leg with such dignity, and she was with me, and had me on this day, and we were together doing fun things in spite of it all  ... so yeah, loaded. 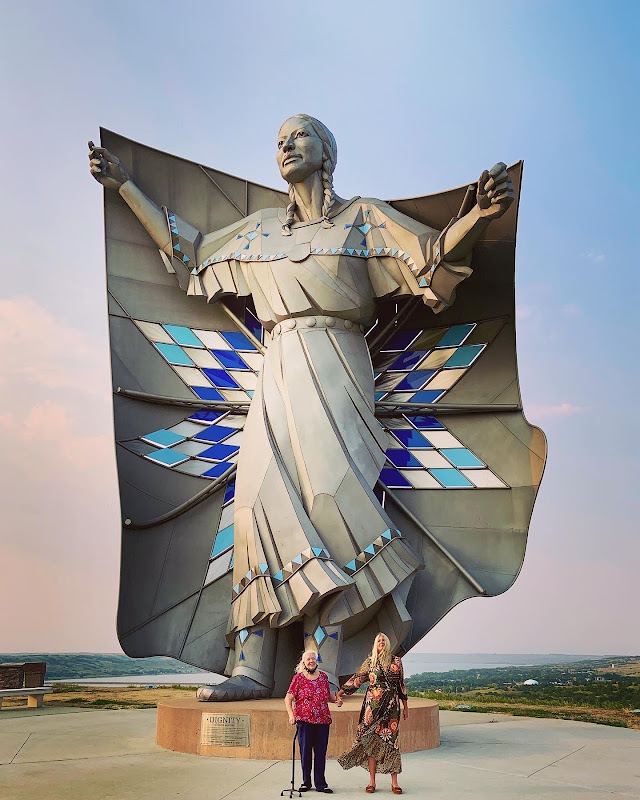 The 50 foot tall Native woman created from stainless steel by sculptor, Dale Lamphere, is one of the most stunning works of sculpture I've ever seen. 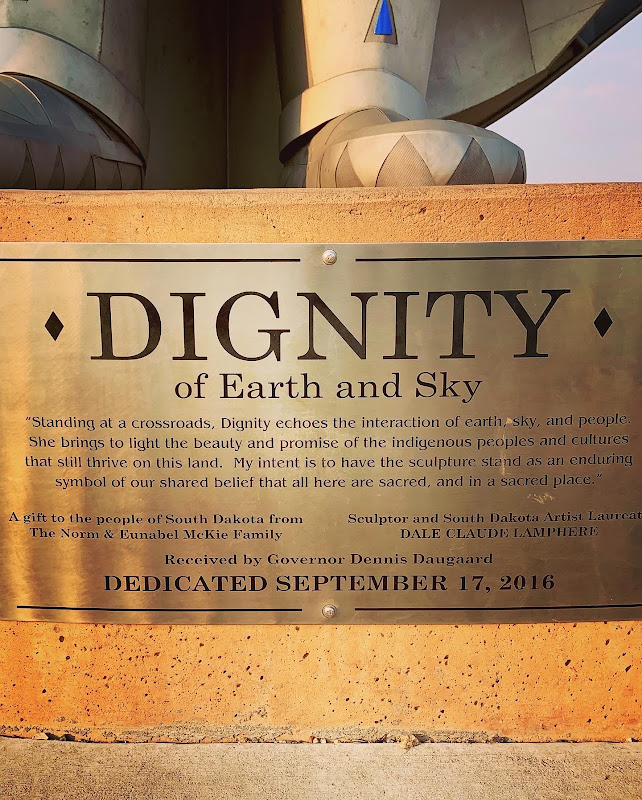 Three different Native women served as the models for the Plains woman receiving the traditional Star quilt of the area tribes. The blues in the quilt are representing the water and sky that surrounds it. It's something else. I met a lot of people there taking pictures and generally standing around in awe as the sun set into the river. Many of them did not know this work of art was here and were just going to the rest stop where she resides. A few, like myself, were there as their final destination, like the female biker couple who had ridden 500 miles from Iowa just to see her. I understood. 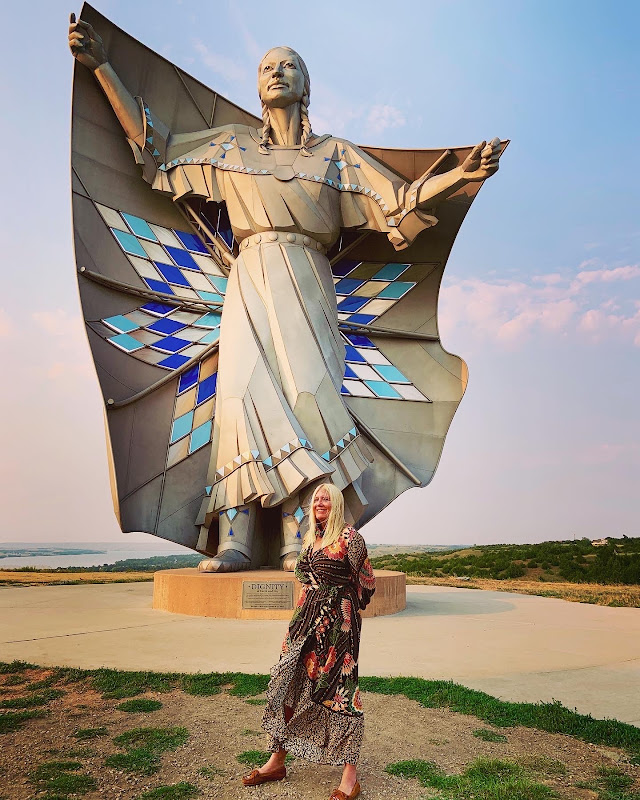 When the sun sets, Dignity lights up and becomes even more beautiful.  We visited the Akta Lakota Sioux Museum the next morning, and they told us that they are going to be adding fringe to Dignity's quilt, so they will move in the wind. And now I have to go back. 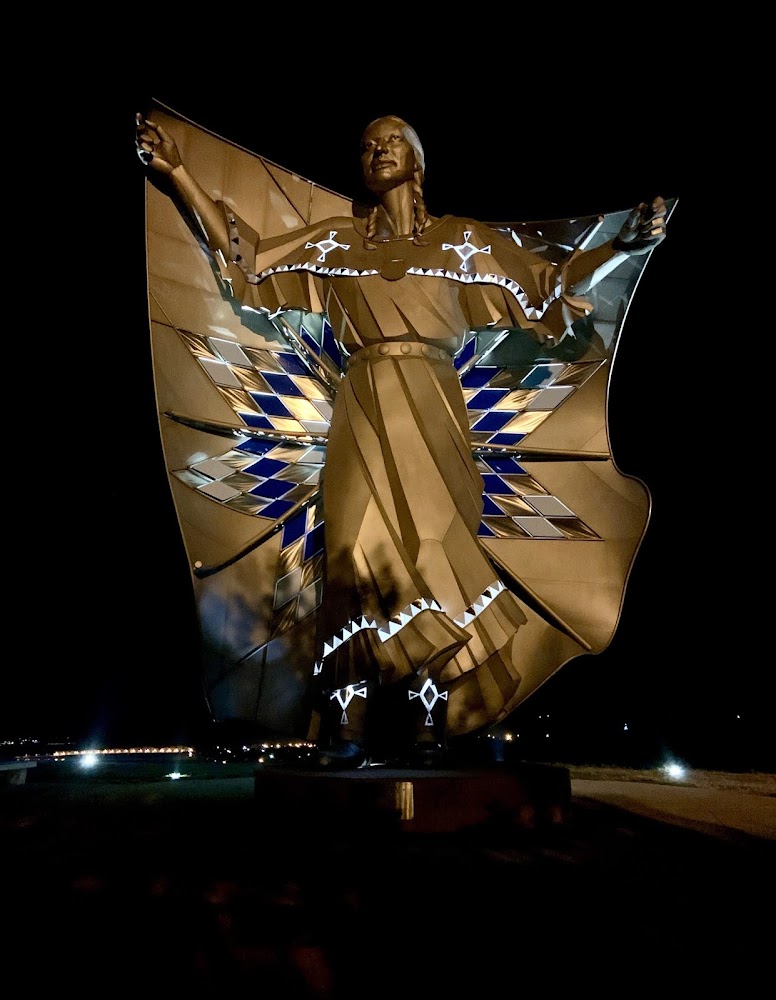 The museum was awesome, with a ton of information about the Dakota, Lakota, and Sioux tribes of the Plains - as well as an awesome gift shop. It's located on the campus of the St. Joseph Indian School, a free boarding school for Native kids to learn and keep their traditions alive. Super cool.

There is a beautiful medicine wheel outside, where my Mom offered up a prayer to all of the directions. I can't believe I had never been to South Dakota before, and am so happy to be able to check off another state on my list. I will say that not a single person seemed to care about Covid in South Dakota, so that made me a little bit nervous with Mom, but we took every possible precaution and stayed far away from others. No masks, everything was open (even pool and hot tubs!), and I overheard an old dude say "I turn down my hearing aids when anyone brings up Covid." Yeah. So, use your best judgement. 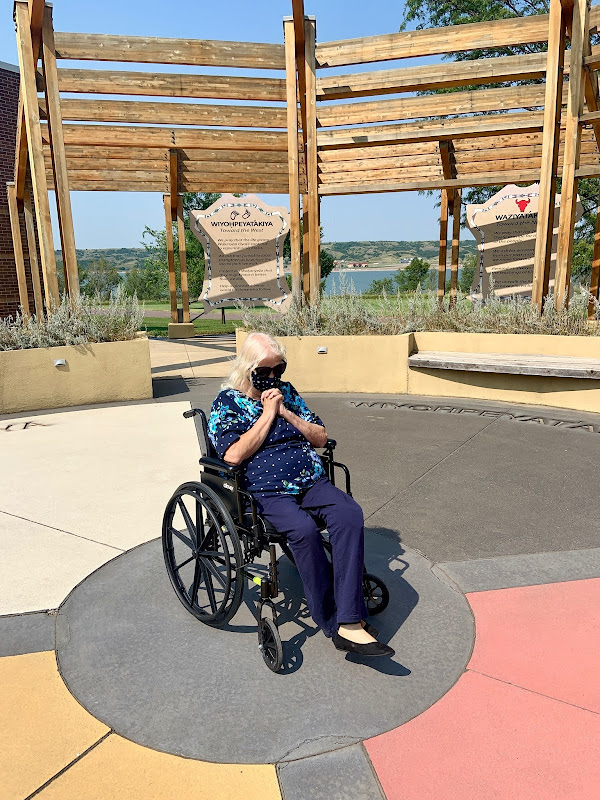 I was tempted to keep on going to the Black Hills and The Badlands, but we only brought enough meds for the one night, so back we had to head. I think I'll wait to hit those more touristy spots until all of this mess dies down, but now I know that I'm really into it. I didn't get a chance to respond to any birthday messages or anything with all of the driving, so please don't feel bad if I haven't called you yet - I will! 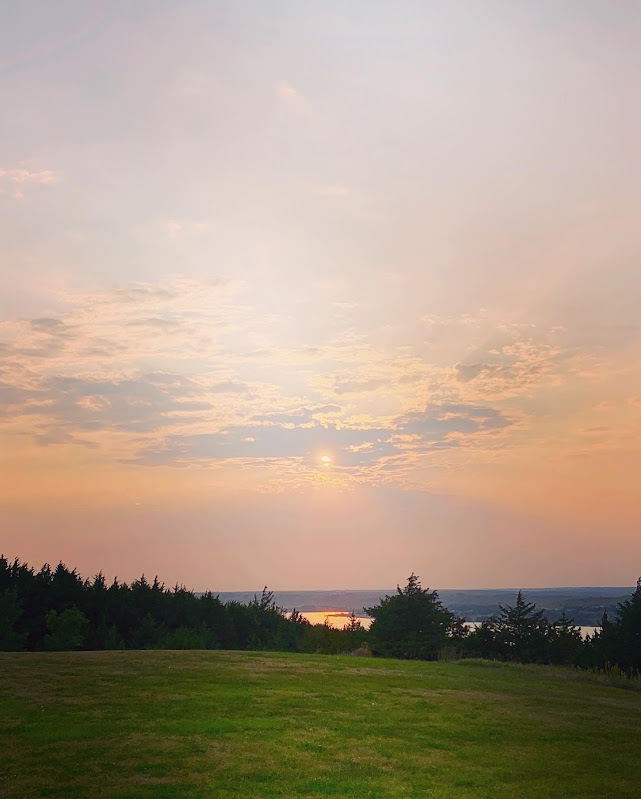 We headed back to Minneapolis in 100 degree heat, but we had the air on in the car so it was fully pleasant as we watched all of the gorgeous scenery fly past (80 is the legal speed in SD!). I had heard about a new mural in Mankato, Minnesota that covered huge silos, so that's where we headed next on the way home. 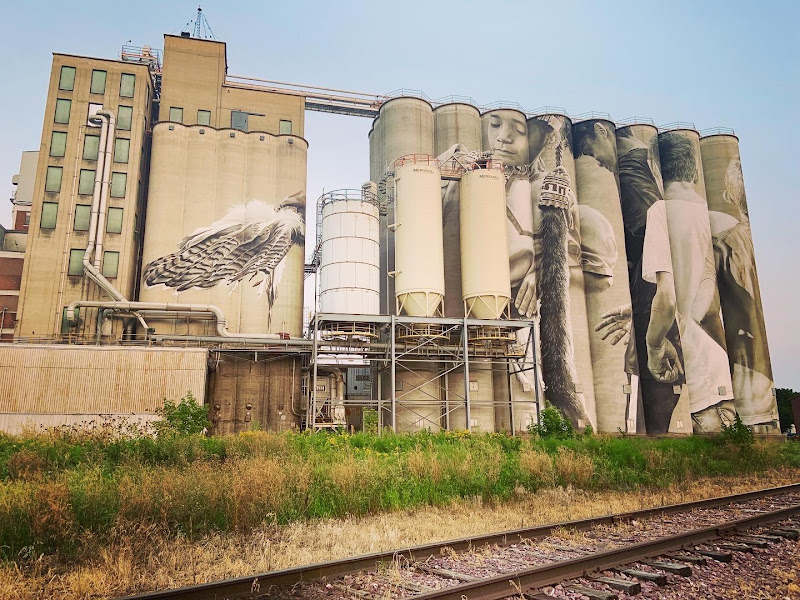 WOW. The work by Guido van Helten is about the same height as Dignity (maybe taller), and depicts Native kids in what looks like a black and white photo but is in fact a painting. I had to climb down across some railroad tracks (and wait for a massive cargo train to go by) to see all of its angles, and it really is something else, there for everyone to see as they fly down Highway 169. 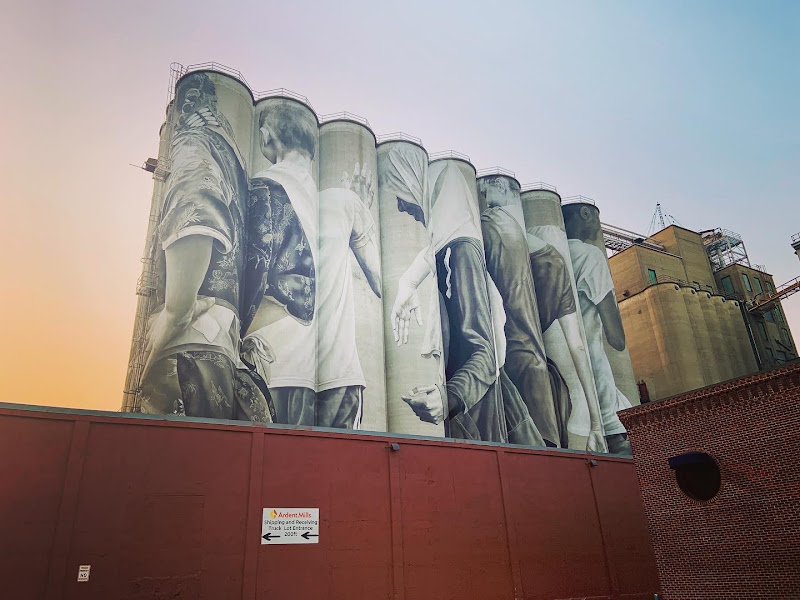 Birthday 2020 definitely had a Native theme, and I'm so happy that at least this part of the world shows them the absolute reverence (and apologies!) they deserve. This is truly THEIR America, and it's high time we all start acting like it. Thanks. 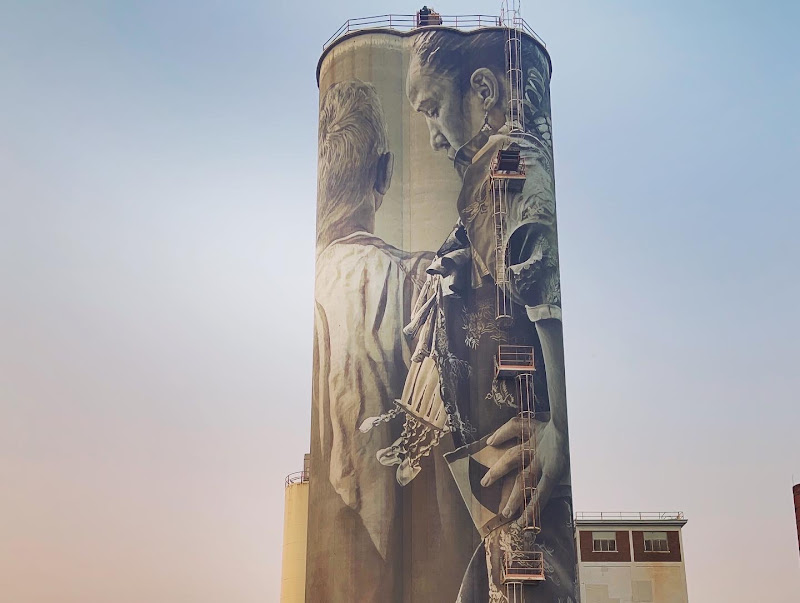 Yesterday was also the picture wrap of our documentary film, 90291: VENICE UNZIPPED!! The crew had some pick-up shots to get yesterday, and when they were done they FaceTimed me and I talked to and thanked everyone for all of their passion and hard work from the side of the road in the 100 degree South Dakota sun ... and was once again emotional. We could never have imagined how much things would change in the world during the production of this film ... and make our topics of income inequality, gentrification, homelessness, and art in our BELOVED Venice even MORE timely. 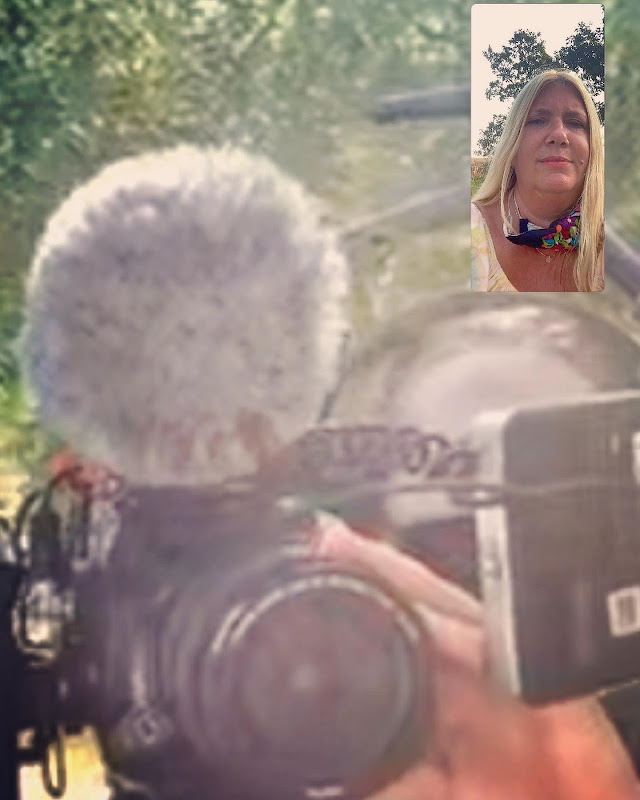 Everyone kept their heads down and continued to do the work, and now we will have a beautiful, important film to share with the world, and maybe help to make it a little better. I'm SO proud of the crew, and of this film, and of the wonderful hearts, minds, and souls that made it all happen. I'm bursting with love and just can't wait for it to be out in the world! 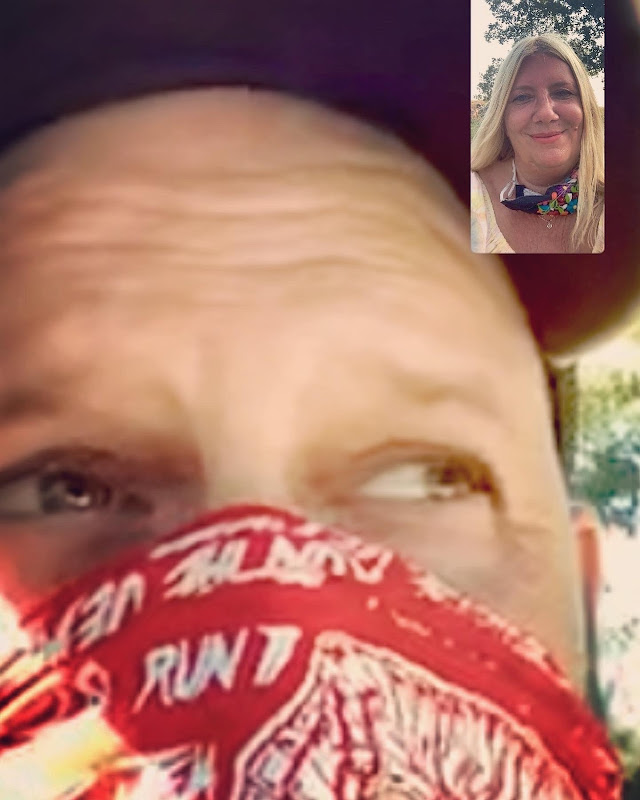 So, Birthday 2020 is behind me and now I can kick off a new, cool year ... PHEW! Made it through another one! Gratefully, for sure. Please put beautiful Dignity on your list of must-sees, because it's just stunning (and I think a lot of people just fly by the hill if they don't need the rest stop, because the Missouri River lying ahead is so majestic you might now even notice the sculpture up above unless you know about it)!

THANK YOU TO EVERYONE WHO CARED AND MADE ME FEEL SPECIAL AND LOVED! I love you. I thank you. I hope I can actually party with you soon! I can't wait. Love, your Ceej