Made In Venice Out Now - On The Venice Skatepark's 8th Birthday!

On Tuesday, I was standing on the street corner talking to a former neighbor when a car drove by and someone yelled, "Nice hat!" I was wearing my Made In Venice baseball hat, and the yeller was one of the stars of that excellent documentary, Jesse Martinez. It was fitting that I would run into him on that day, as it was both the release date on DVD and online for the film, and also the 8th birthday of the Venice Skatepark - cause for much celebration! 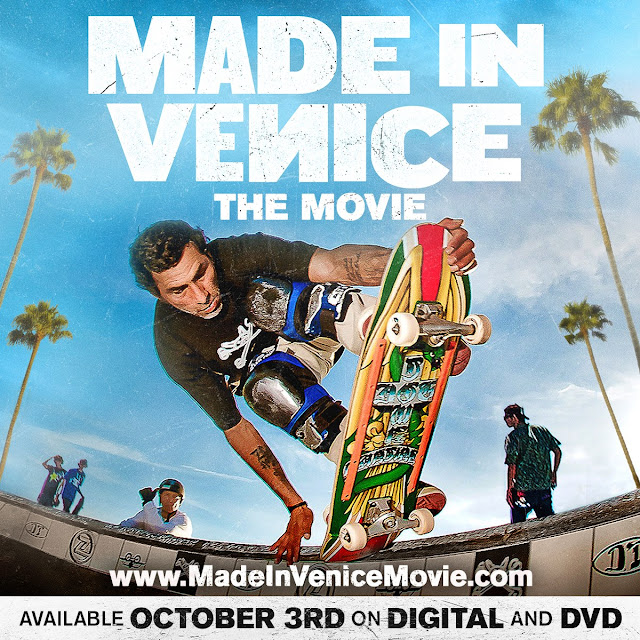 This story had to lag a couple days as Martinez is not the easiest cat to get a hold of, and I wanted to talk to him about the State of the Skatepark today at eight years old, and we got to have a good chat about it all just this morning. Now that the movie is available for all to see, everyone will have a better idea about what all went into making the dream of a world class Skatepark in Venice become a reality. It was a years long effort by many, many people, and Made In Venice tells it exactly as it went down. 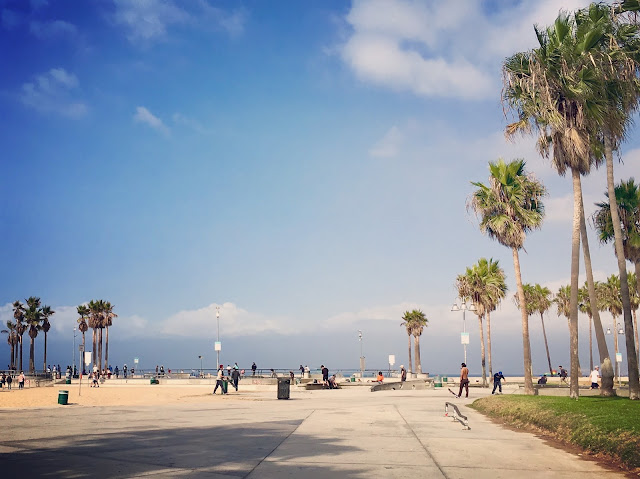 The hope with telling this story is that audiences will know how much the park means to the people of Venice, and by sharing the story, garner more support for the people that continue to make it all happen ... especially Jesse Martinez. Though everyone knows Martinez as the Dogtown icon that he is, I'm not sure everyone knows how hard he works every day to maintain the park, and how little he gets in return. He has been there nearly every day of its 8 year existence, usually at about 4 a.m., making sure the Skatepark is clean and safe for everyone to use. He does it because it means the world to him, not because he's paid - because he's not. Martinez goes out of pocket for cleaning supplies, donates his time and labor, and put his own skating career on hold to see that the park is well maintained ... and it truly seems that the City of L.A. just doesn't care.

The city makes a lot of money off of that park, with filming fees, rentals, and tourist dollars, and none of it comes back to the park. Zero of it goes to Martinez and his cleaning crew (friends and skaters that just volunteer), not even for supplies. And it's just not right. There has been nothing but a run-around from the city, and Councilman Mike Bonin. Bonin promised to push through a contract for Martinez to be an official member of City staff to maintain the park ... well, that was three years ago, and nothing has happened. Nada. They won't offer a Skatepark budget of any kind, though Martinez has saved the city an astronomical amount of money by doing the work himself. The contract they would offer was so unfair that everyone urged Martinez not to sign it, and the City replied that it was that or nothing. Martinez thought about walking away, and did so for a couple of weeks, only to return to find the Skatepark in the absolute worst condition of its relatively young life. Which is dangerous for skaters, and bad for everyone. The park is a major tourist attraction, "the most commercialized Skatepark in the history of Skateparks," according to Martinez, and it's high time the City of L.A. recognizes the massive worth of both the park and Martinez. 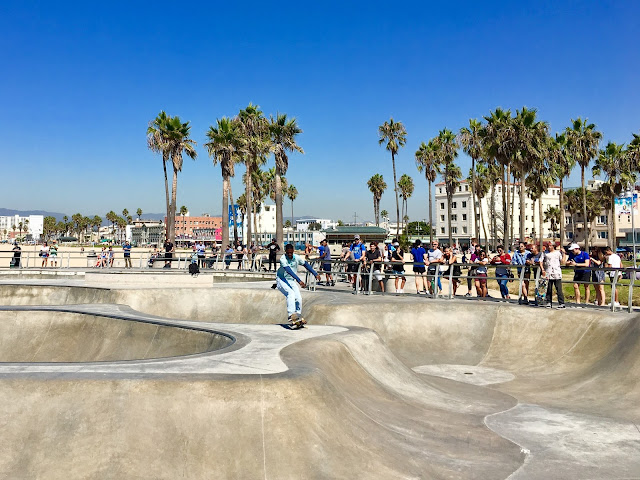 "It's like they were kids that were bullied, and now they're trying to get back at us," said Martinez about the suits that make these kinds of decisions. Which is about the only thing that makes sense, as anyone who hears about the way Martinez is treated by the City finds it completely outrageous. Including the Pacific Division cops, who routinely stop and thank Martinez for the work he does, and for keeping all of those kids out of trouble while skating. Parents thank him for the same thing. Skaters hold him in the very highest regard, and follow his example of respecting those around them, as well as the park itself. "It's not a Me, it's a We," says Martinez. "It's a community that does this."

A community that Councilman Bonin and his cronies need to also respect, or soon find themselves out of their jobs. We're supposed to be talking about how great a film Made In Venice is, and how much it can help Martinez out (after paying back the investors, especially the mother of its director, Jonathan Penson), as he will see monies from the film returned back to helping maintain the park - but Bonin never even attended a screening. They've sent hundreds of emails to the Mayor of L.A. requesting a little help, without a single one being returned. "Everything changed once Bill Rosendahl died. He was such a Venice local, and such a good man ... everything was great when he was alive," Martinez explained to me. And I'm sure Councilman Rosendahl would be rolling over in his grave if he now knew how his friends at the Skatepark (that he greatly helped with bringing to life) were being dismissed. If you know anything about the history of Venice, you know it's not real wise to become the villian to Dogtown ... just saying. Especially when their backs are against the wall, which Martinez feels they now are. He can come with an army of skaters over 18 to protest all of this, and you can be sure that none of them will be voting to re-elect Bonin (who everyone knows can use all the support he can get these days). 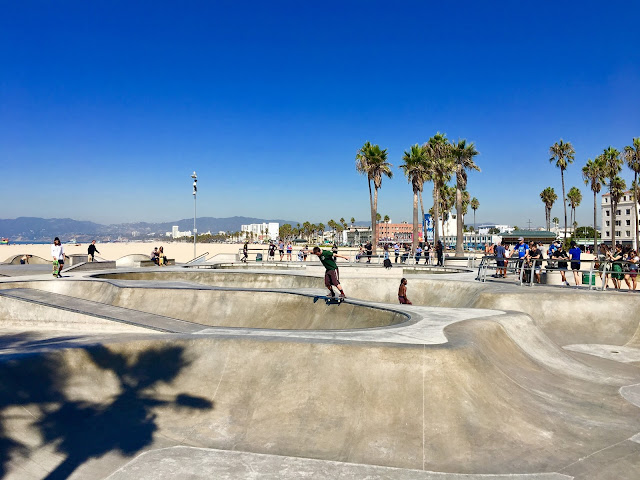 To look at the positive side of things, I asked Martinez about the current generation of Dogtown skaters. "I'm more than proud to call these kids Dogtown boys {and girls}, I couldn't be any happier with them. My main goal was to assure that there would be a third generation {at least} of Venice skaters, and the new age of Venice skaters is out there just DESTROYING that park. Everything I've been working for, there it is! It's WHY I've been doing this for 38 years, why I put my own career on hold, why I've given EVERYTHING to that park ... but the financial hardship is too much, and I've gotta draw the line. I'd love to stay on at the Skatepark for the next 20 years, and then pass the torch to someone younger, but I don't know. The City has completely let me down. I'm a skateboarder, so I might move on ...". And no one could blame him.

Watch Made In Venice and you'll realize how much Martinez has given of his life to this wonderful Skatepark, but he certainly hasn't done it for the money - or the glory. Martinez has carried the weight of all of this around for years, but now says, "I'm beyond proud of how this movie came out. A lot of good has come out of it. I was worried because people take Venice very seriously, and I didn't want to disgrace the neighborhood. And it's a real story, with less tricks and things than your typical skate film, so I wasn't sure how skaters would react, but I've traveled all around the country to screenings, and the reaction has been nothing but good. There's not one bad review. I just wish Jay Adams and Shogo Kubo could have seen it, but their sons are around, so they're still here."

It's a great film, and really provides a wonderful insight about what it means to be from, or live in, or simply love Venice, California. "I hope it inspires kids long after I'm gone to be proud of Venice. Dogtown will never die, it's worldwide. I love Venice, I just wish I could live there." It's a very sad thing (which I totally get and am also dealing with) when someone like Martinez - born, raised, and a true legend of Venice - can no longer afford to live here, especially considering how much of his life he has dedicated to this town, in every way. People trying to just make bank off of this very special place simply don't get it. And never will.


Please support Venice, its Skatepark, and its champion, Martinez by purchasing Made In Venice (and its merch!) to ensure that future generations will indeed be able to proudly call themselves Dogtown skaters.

Made In Venice is available now everywhere.