If there is ever a chance of seeing Kris Kristofferson live, my friend Sweet D and I take it. He has been our main man since the 1970s, and at 80 years old, he is still as incredible as ever. After a week that seriously saw Donald Trump became our nation's President ("Elect") and dreadfully lost the legend that was Leonard Cohen ... hearing Kris Kristofferson sing to us was exactly what we needed. The Rose in Pasadena could easily be a venue inside a casino like Morongo. We did not realize it was a dinner theater. Or that we would be the youngest Kristofferson fans in the house. Septua/ Octogenarians were chomping down on wedge salads and steaks, washing it down with martinis, and waxing poetic about all of the times they'd seen Kristofferson, and "Did you know he was a Rhodes scholar?" I did. He took the stage with no introduction or fanfare, taking the diners by surprise. They all leapt up and gave The Silver Tongued Devil a standing ovation immediately - and appropriately.

"Shipwrecked In The 80s" was the first number, and the listener is drawn in to the story of it all from the very first verse. Kristofferson has always been an activist and a philosopher, and his words are as on the nose in these times as they've ever been. Ok, and it must be noted - The Man is just as handsome as he's ever been ... just in a wiser, more seen it all way than he was when he first stole our hearts in A Star Is Born (which remains my favorite childhood movie). "Darby's Castle" was another from the illustrated storybook of this legend's mind, and then the retirees lost it when "Me and Bobby McGee" was next. As did we. 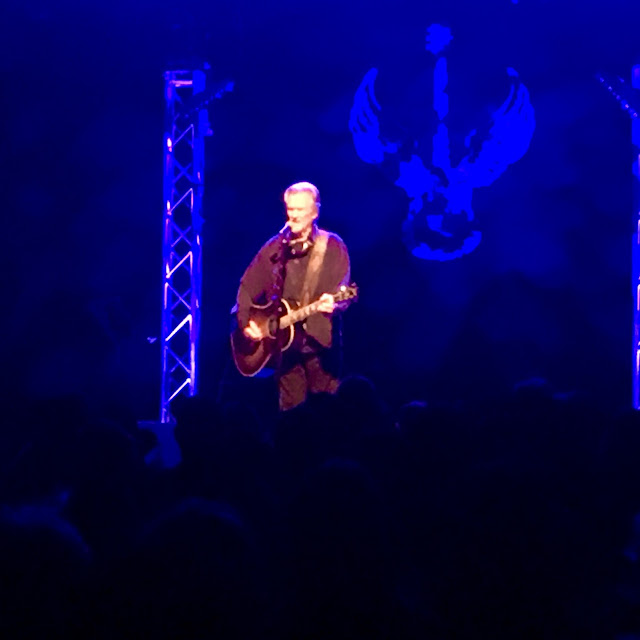 "Here Comes That Rainbow Again" gave us some of the hope that we so desperately need right now, and "Best Of All Possible Worlds" made us yearn for exactly that. Kristofferson was in fine voice, and his gently accompanying himself on acoustic guitar was all that was needed to bring these song stories to life. He was in high spirits, shouting little "Woos!" after songs, mugging to the lyrics and offering little asides like, "True story!" There were rare glimpses that he was really 80, like wearing a brace on his wrist to play, and when he said, "I had a clever ending when that was recorded, but I forgot it and I'm too old to care." Which only made us love and cherish him even more.

"Help Me Make It Through The Night" nearly killed Sweet D and I, and when I glanced over at her, I saw that she too had her hand over her heart, eyes glistening in full swoon. It couldn't be helped. We were already treasuring our memory while it was happening. I think everyone was. "Casey's Last Ride" was a vivid picture of outlaw love, and Wow - when he played "Nobody Wins" ... well, it could have been written that very morning. Give it another listen.

At this point an overzealous Busser was clanking dishes off the table right in front of us. Like DURING that song. Sweet D said, "Kris Kristofferson is playing RIGHT. THERE." to me after we shared our eye roll ... Kids today. They have no idea. This was followed by Kristofferson saying that a man up front had fallen asleep. Good thing I didn't see who. The venue was definitely beneath the absolute Mount Rushmore-worthy man that sings about our real America - and always has. The word I associate with him most (other than heartthrob) is "Freedom". To me, he embodies American freedom, and the struggle to preserve that sacred treasure. 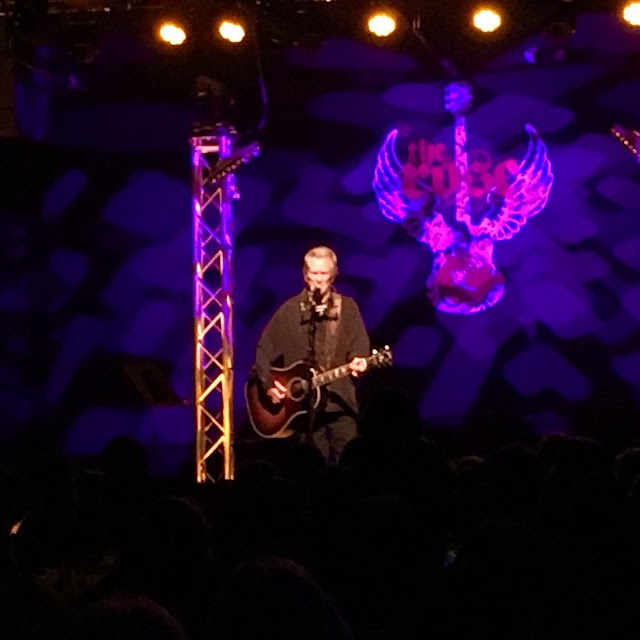 "From Here To Forever" again made us wistful for the youthful Kristofferson, just so we could enjoy him longer on this planet. There were all walks of life in this audience, and I'm pretty sure we were all feeling the same way. "Broken Freedom Song" again spoke to my soul about that elusive freedom. "Loving Her Was Easier" ... Well, it really doesn't get much better on this earthly plane.

There was a brief intermission - where more dishes were cleared and more martinis were consumed - and then Kristofferson was back, again with no fanfare. "I'd Rather Be Sorry" was more of the hopelessly romantic genius that made us fall for KK long ago. Rita Coolidge was one of the luckiest women to ever live. I swear.

"They Killed Him" was a song that Kristofferson was proud to say had been recorded by Bob Dylan with a children's choir, and it was lovely. "Jody and The Kid" pulled on our heartstrings. "The Pilgrim" was perfect. "Jesus Was A Capricorn" earned shouts of approval, that we could all be more like Jesus right about now. "The Promise" made us love him even more, especially when he said, "It says I'm supposed to play harmonica here, but I don't feel like it. And I forgot the end. Too many blows to the head." Still ... fine by us. Kristofferson has chord changes that are very significantly his, and my heart swells at every one. And the minor notes - Ugh. They kill me.

"To Beat The Devil" showed off Kristofferson's wit, and "Sunday Morning Coming Down" showed off his history. That one was a real crowd pleaser ... but wait. They all were. Like "The Silver Tongued Devil" that is so perfectly his song. I'm well aware that I'm gushing, but when someone is your ALL TIME FAVORITE ... Oh, well. "For The Good Times" began the eyes welling, and "A Moment Of Forever" (my personal favorite) added the lump in the throat. "Why Me, Lord?" pleaded above for help, and again was completely perfect for a soundtrack of today.  People went nuts clapping and shouting as Kristofferson shouted a firm, "Thank you!" He left the stage, but came right back for "One more". Which was "Please Don't Tell Me How The Story Ends".

As Kristofferson brought the song home, he SHOUTED the song's title, signaling that he's been thinking about all of it a lot. The state of the world, and his own life ... and how it all ends. Like Kristofferson, I'm not ready. Don't tell me. And until then, let's celebrate living legends, music, and the FREEDOM that we all still have.

**Top photo courtesy of Tasteofcountry.com because it's perfect.