Hi! There have been some technical, personal, and national difficulties that haven't allowed me to be as prolific with Venice stories as I'd like to be lately, and for that I apologize, and thank you for being here to read again now. There is so much to say about the election nightmare, but I think it's really better to go forward now, and think and talk about things that we as people can do together in the name of good, regardless of whomever our leaders are. The climate is in deep crisis (Please everyone watch Before The Flood online asap), and it won't matter at all who's in charge for four years when no one is able to inhabit Earth anymore. So let's focus on what's really important. LIFE.

Water is Life. When we first started hearing about the protest against the Dakota Access Pipeline at Standing Rock Sioux Reservation, everyone was appalled at the images coming out of there with Native Americans being tear gassed and attacked by police dogs. For peacefully wanting clean drinking water. Let that sink in. 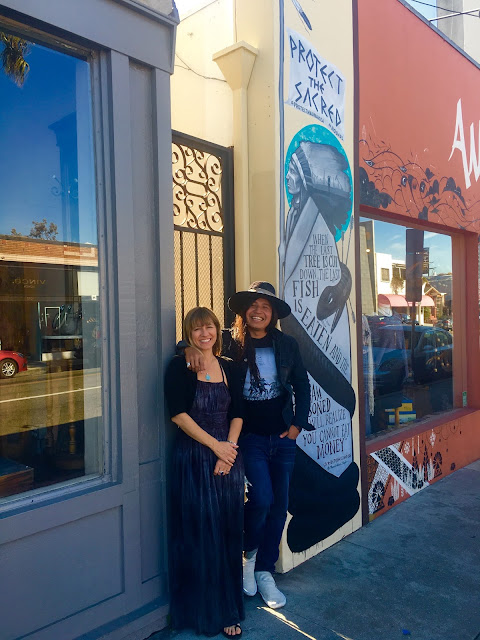 Some people want to help more than look away, and Kim Michalowski is one of them. She owns the Ananda boutique on Abbot Kinney, as well as being a wonderful friend to all of Venice. We talked about the idea of having a mural done in support of Standing Rock on the front of her shop, and started reaching out to Native American artists. Friends connected Michalowski with artist Lehi Thunder Voice Eagle Sanchez, a Navajo from Arizona. Thunder Voice Eagle recently returned from Standing Rock, and after sitting down with him to talk about it all, I feel both inspired and encouraged, as well as super impressed with both his art and his humanity.

Thunder Voice Eagle worked for years with his father's organization, Anasazi.org, a kind of Outward Bound type group that takes at-risk kids out into nature for 50 day trips (awesome). A few years back,  he had a dream that he had a message to help his people, and that his art work would be the best tool to do so. He did a painting for a family friend that was so well-received that he began to focus on art full-time, selling paintings through Instagram and his website, as well as through various galleries. 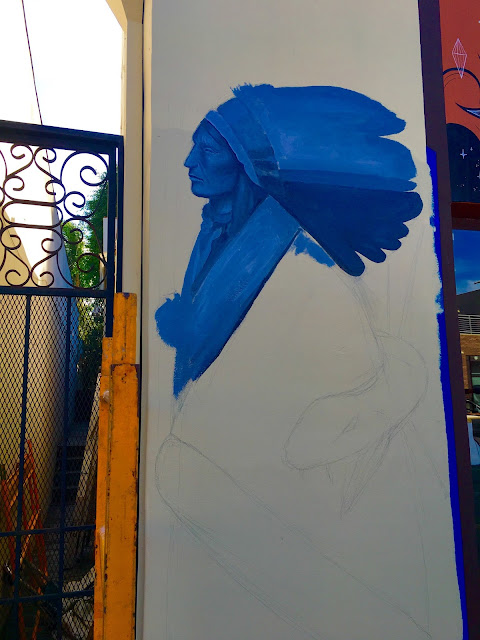 "Nothing has changed for the Natives, now it just feels like we have a whole bunch of new allies," Thunder Voice Eagle told me. "Every reservation has crazy stuff happening. There has always been corporate land grabs, it's never on the news, and we always lose. But now we have social media."

The U.S. Government separated tribes by design, so they wouldn't band together to oppose the stealing of their land and resources. Once reservations got cell towers, the people got cell phones. MySpace days started connecting people. Facebook has connected us all. Once the Facebook Live videos started coming out about elders, pregnant women, kids, everyone being attacked at Standing Rock by police in riot gear for peacefully protesting, tribes across the nation saw it, grabbed their stuff, and went to North Dakota. United.

Native leaders can also not always be trusted, and often take the corporate money to line their own pockets to the detriment of their people. Standing Rock is not like that because their leaders said no, and realize how this awful pipeline will affect the drinking water of so many people all over the affected area, not just those on the reservation that our government tends to dismiss. All Americans, all who deserve better. "This situation has stirred something in the warriors, it has become their top priority," explained Thunder Voice Eagle. He told me that the pipeline company took the information of where Native burial grounds were and dug them up so there would be no evidence of it ... it's really that sinister. And must be stopped, for us all. 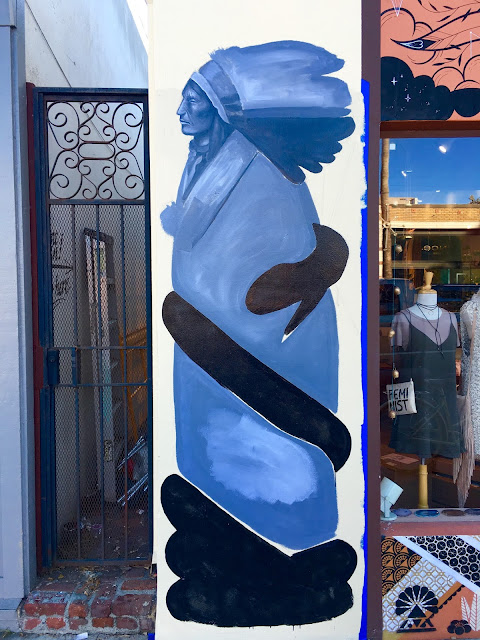 In talking about the mural and the message, Thunder Voice Eagle said, "It's really about hope. I believe that people are inherently good, sometimes they just forget. Like the mural says at the top, 'Protect the Sacred' ... People need to protect themselves, because they're worth it. You must remember that YOU are sacred. The more we remember that, the less things like this will happen." I love that. Remember that you are sacred. If you do that, chances are you absolutely will not put up with anything that harms anyone. Right?

"We have to learn forgiveness. Those police are scared too, they're doing their job that they've been ordered to do. But if we took off the riot gear and the headdresses, we're all just people. We can sit down to dinner together and talk about what's next, and how we can work together." I got a true sense of calm when talking with Thunder Voice Eagle, and am choosing now to look at things like he does. That we are now being forced into action as a people, and that we are in the time of being Rainbow Warriors - warriors of all colors standing together. We have to be to survive these times, and try to protect our Mother Earth. Nothing else is more crucial right now. 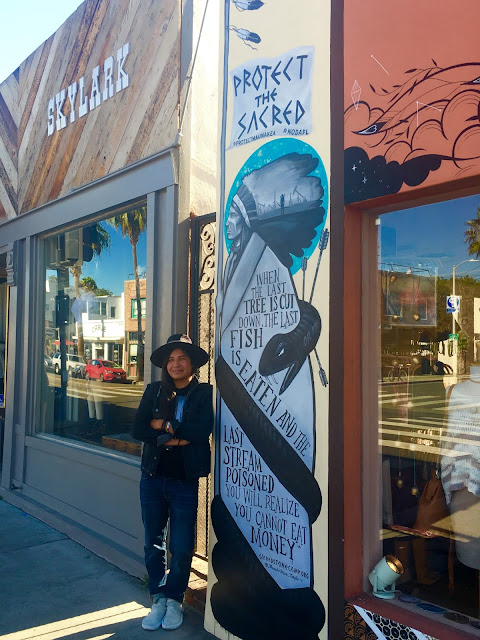 I could have sat and talked all day with Lehi Thunder Voice Eagle, but I was hogging him and others needed to hear his wisdom, so he left me with this ... "Have a heart at peace, but stand strong for what is right." And please, please remember what this wonderful new mural says ...

"When the last tree is cut down, the last fish is eaten and the last stream poisoned, you will realize you cannot eat money." - Cree prophecy