My neighbors and I were jolted awake early Saturday morning by the sound of a car absolutely SMASHING into something outside on the street. There was a brief pause, followed by the tire squealing of someone taking off in a hurry. I got up and looked out my window, but didn't see anything. That's because all of the damage was around the corner, at Alexis Bittar. 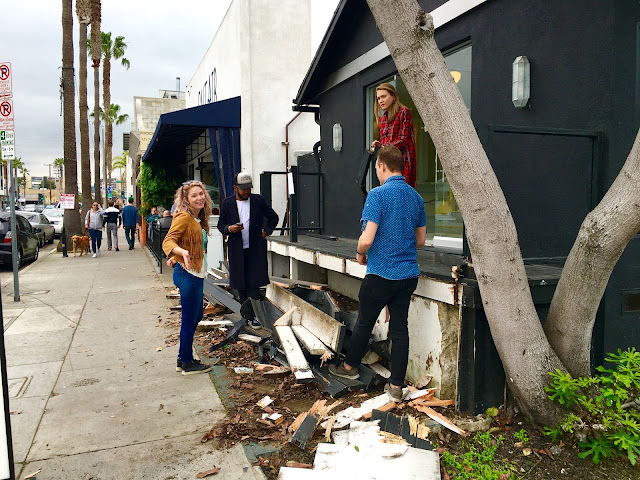 The car we'd heard crashing had taken off the entire front porch of the upscale jewelry store, totally demolishing it. There was a bumper left behind from a grey Honda, last seen racing down Venice Boulevard, bumper-less. They'd also left behind a big skid mark on the sidewalk, obviously made when they fled the scene of the crime ... "And they didn't even leave a note!", said one of the store's employees, with at least their sense of humor remaining intact.

This morning there were new steps already in place, getting ready for a paint job, looking great and almost like nothing had happened. But it had. And could have been so much worse. I suspect it was drag racing, as that old '50s testosterone-filled pastime seems to be making a resurgence in the man-child circles. The news has shown evidence of this racing in a lot of deadly crashes lately, and from what I heard the other morning, this dumbass driver should consider themselves very lucky to be alive - if a rotten fugitive. There were also people out walking their dogs that could easily have been in the way of this ... which I don't even like to think about. 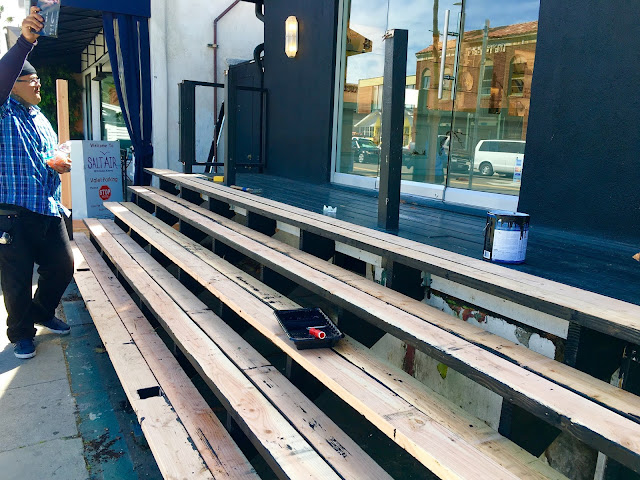 This is a neighborhood. Yes, there's a lot of stores and restaurants on Abbot Kinney, but it's all residential surrounding it, and it's no place for drag racing. I suspect the driver was still up from a bender the night before, and was not in the mindset to care about other citizens. I can often be heard to say, "Relax, it's Venice" to stressers, or car horn honkers, or uptight newcomers or whatever is causing tension. To that, I'll now add, "SLOW YOUR ROLL!" Seriously.