Art Crawl Is The Best

I love the Venice Art Crawl. I do. It's so fun every time, you always see people you know, and you always see some cool art that you'd like to have for yourself.  It reminds me of old First Fridays, when it was by and for the locals, pre-the shit show it has now become, that we all avoid.

The VAC feels old school because the pop up gallery operators (from shops to private galleries and homes) all have a sense of fun, drinks are served, music is played, and I actually saw MOSTLY Venetians at this last March one ... so many that it was actually a problem if you wanted to see all the art, because you kept stopping to catch up with friendly faces. Thus, I didn't get around to even a small fraction of the nearly 40 stops.

My first encounter was with a young man named Joey Thompson and his "Interactive Inspirational Art". He made what he called "Story kits" ... a frame made out of palm tree wood, with 52 blocks with art on them, and 52 matching blank blocks. The idea is that you give the painted one away, then take the blank one and write the story (however you like, so you can be creative too - he used pen and Sharpie, I might go more painty/flowery than that, so your frame winds up looking great) of how and who you gave it to on there. It's a very sweet idea, and you can get a kit from Thompson at clothes2theheart@yahoo.com. He also makes roses out of palm leaves, which he presented me with as I took my leave. Art with a heart is the very best kind. 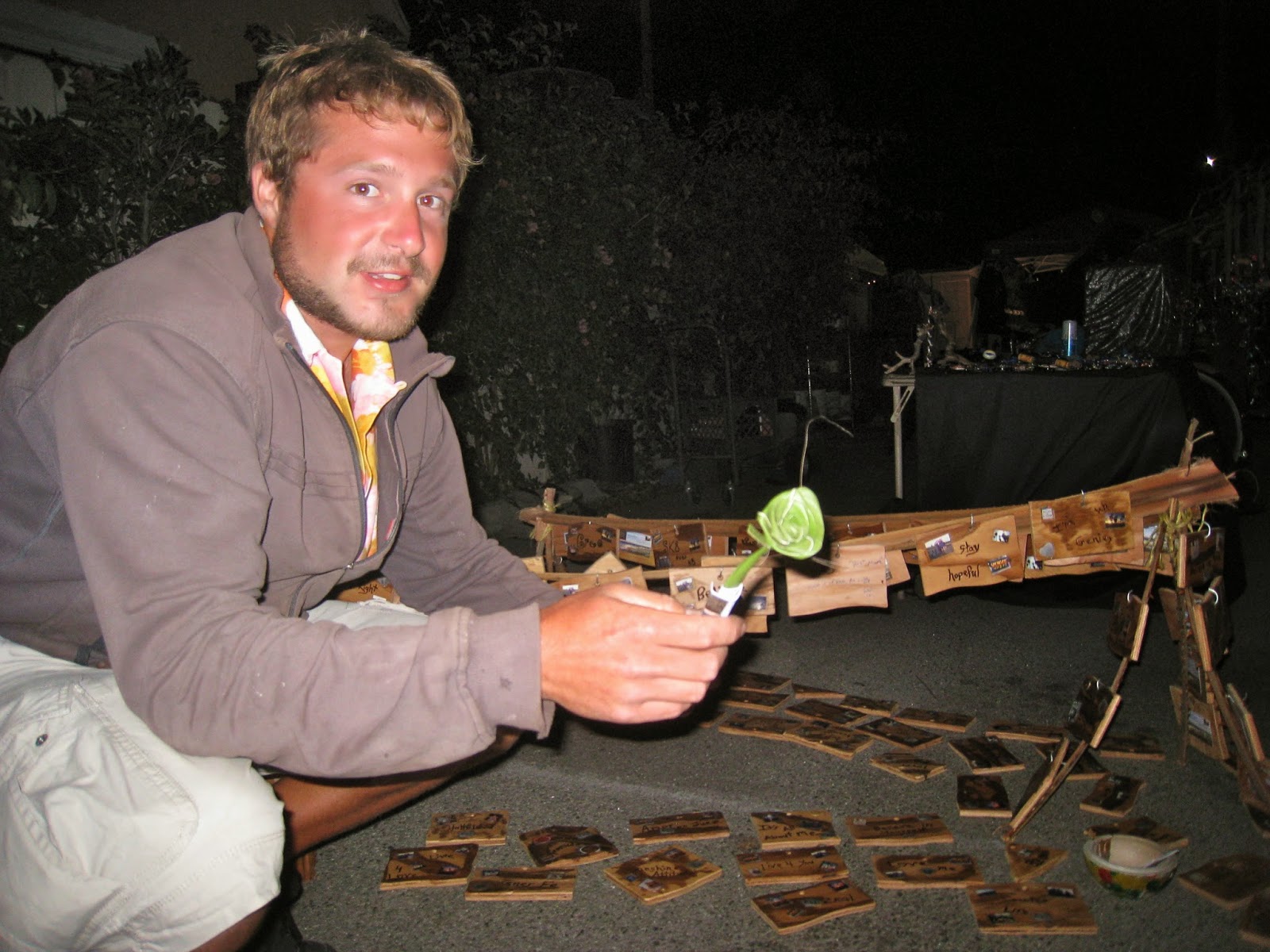 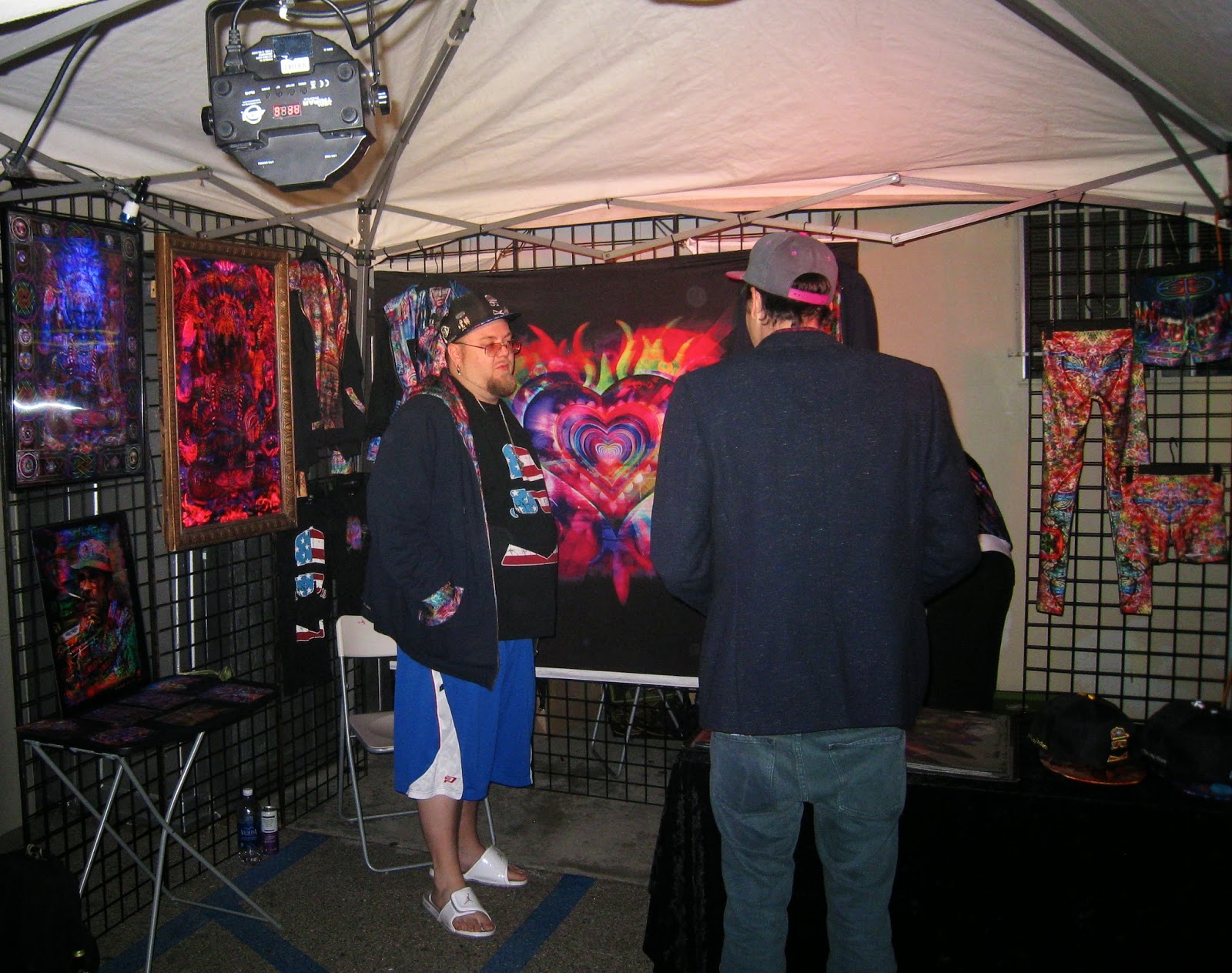 As were the vibrant skateboard decks also at this stop, all too pretty to ride. 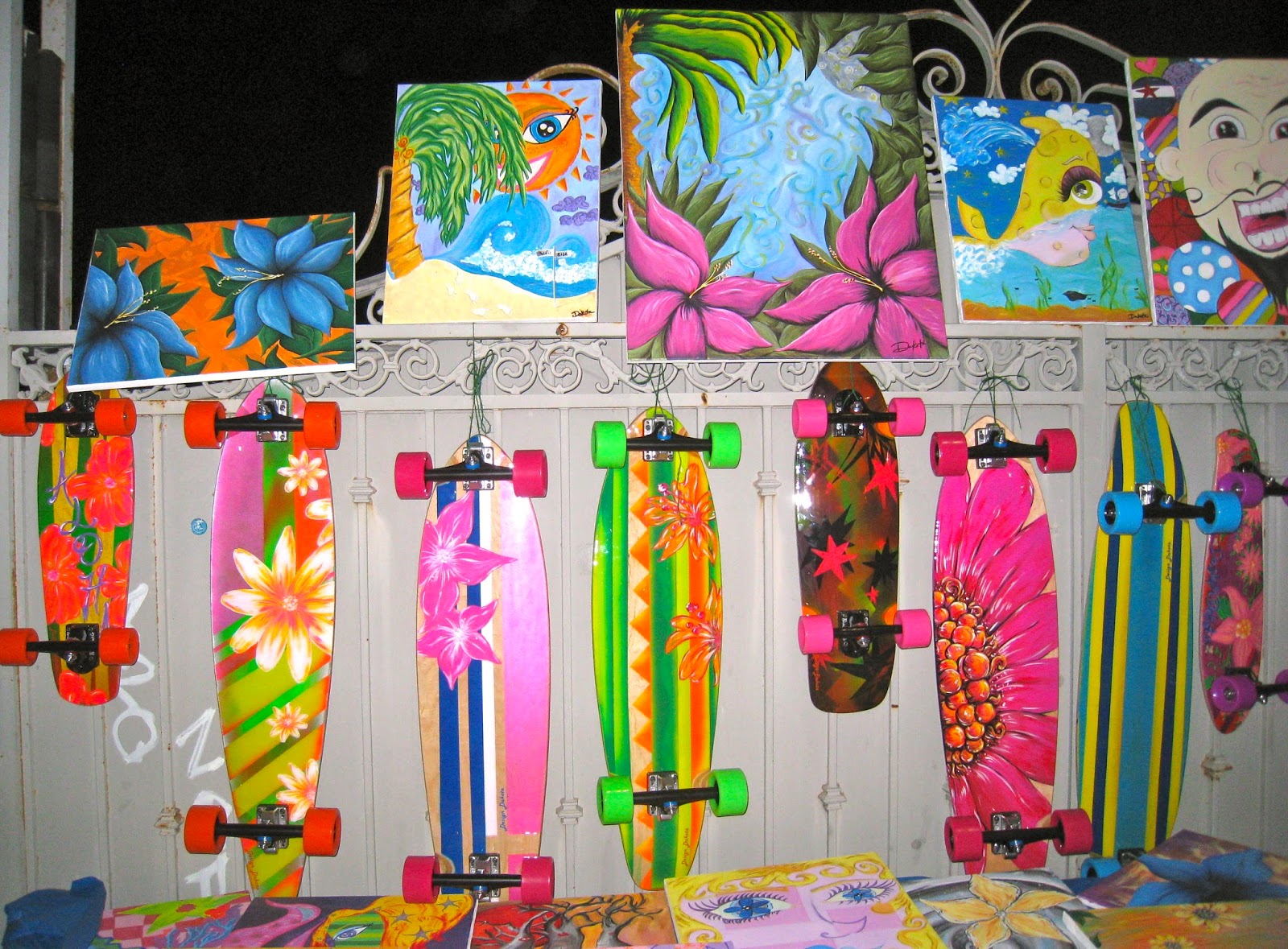 Frank Strasser was showing at Hama Sushi, and then it was time to say hello to the Venice Symphony Orchestra friends at their fundraiser at the Containers on Main Street. In a very non-Art Crawl vibe, I was told that the Orchestra was not allowed to play that night because of some random ordinance I didn't understand. Dumb. So we had a beer and looked ahead to more music from them soon. 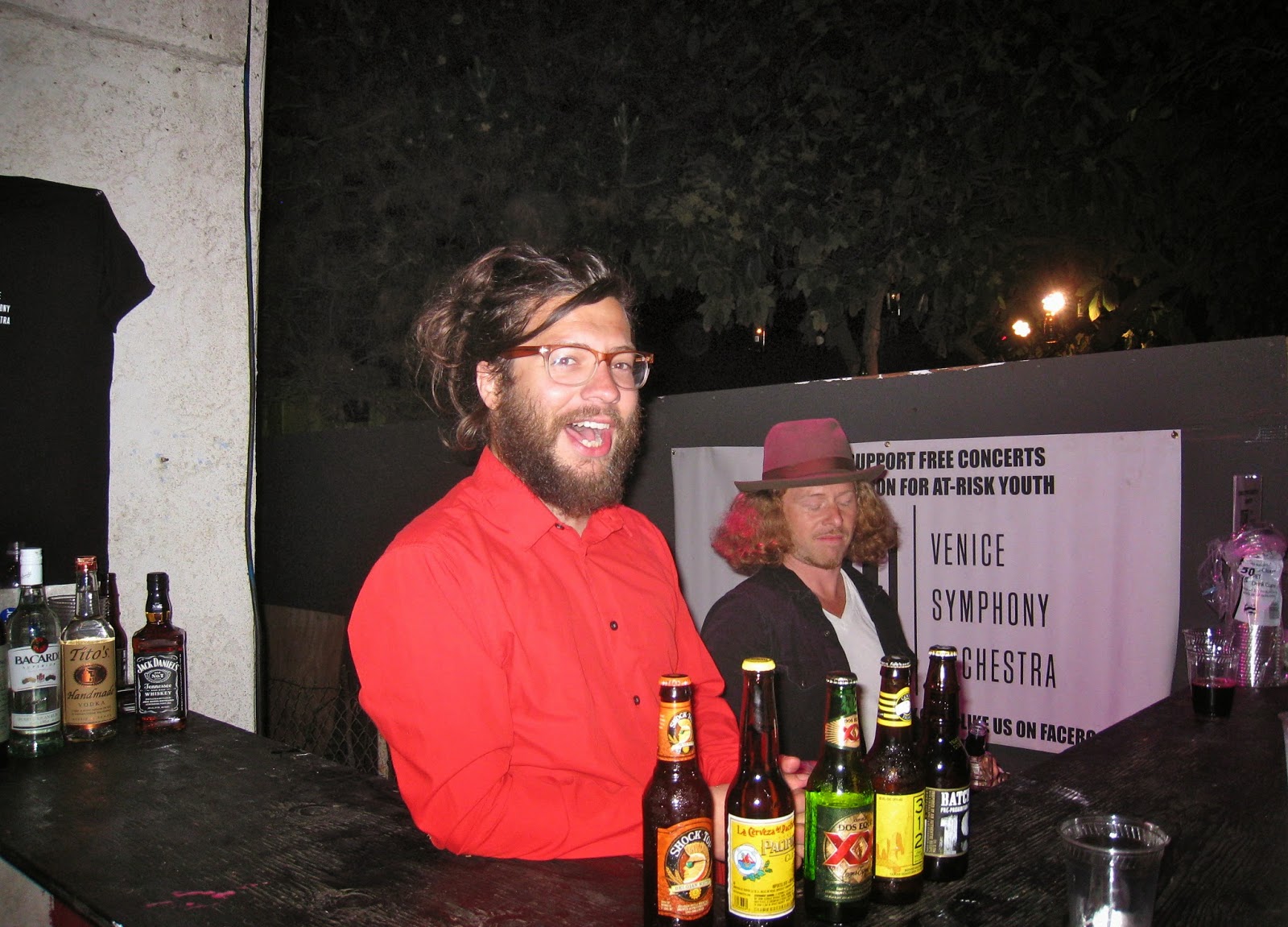 Jules Muck just finished a new mural on the side of this Main Street building. Every time I see a Venice building covered in an expansive mural, it makes me so happy. All buildings should have murals, it would be so much more fun-looking everywhere. 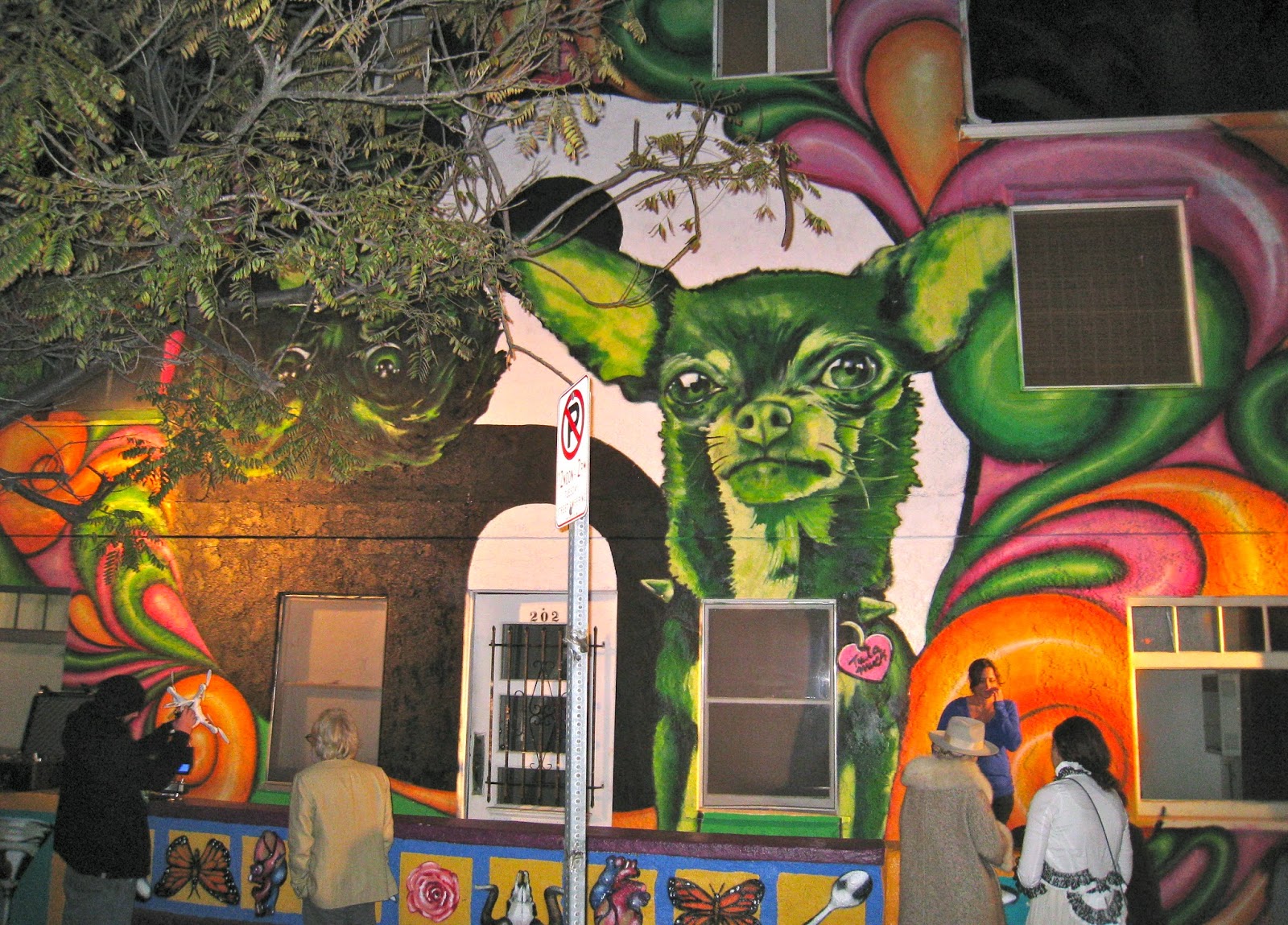 The Dennis Hopper mural faces the new Muck one, and a guy had a drone camera flying around catching the whole scene as it swooped around over our heads. That thing is super cool. (You can kind of see it in mid-air if you squint.) 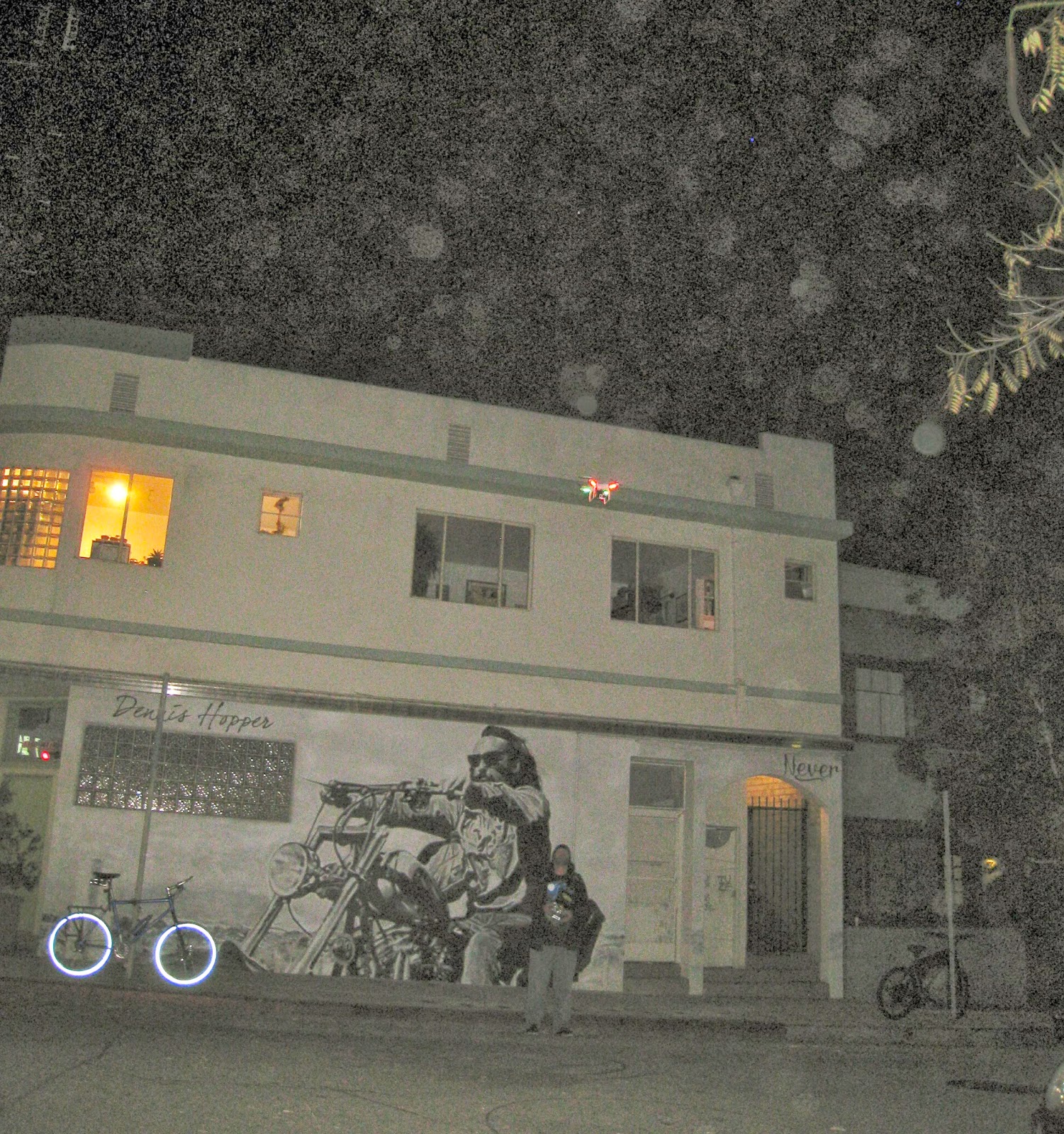 Lightning Bolt and Venice Originals were both having fun parties, with snacks and beers, as everyone seemed to serving up tall PBR's on this night. To the point where Pabst should consider being an official sponsor. 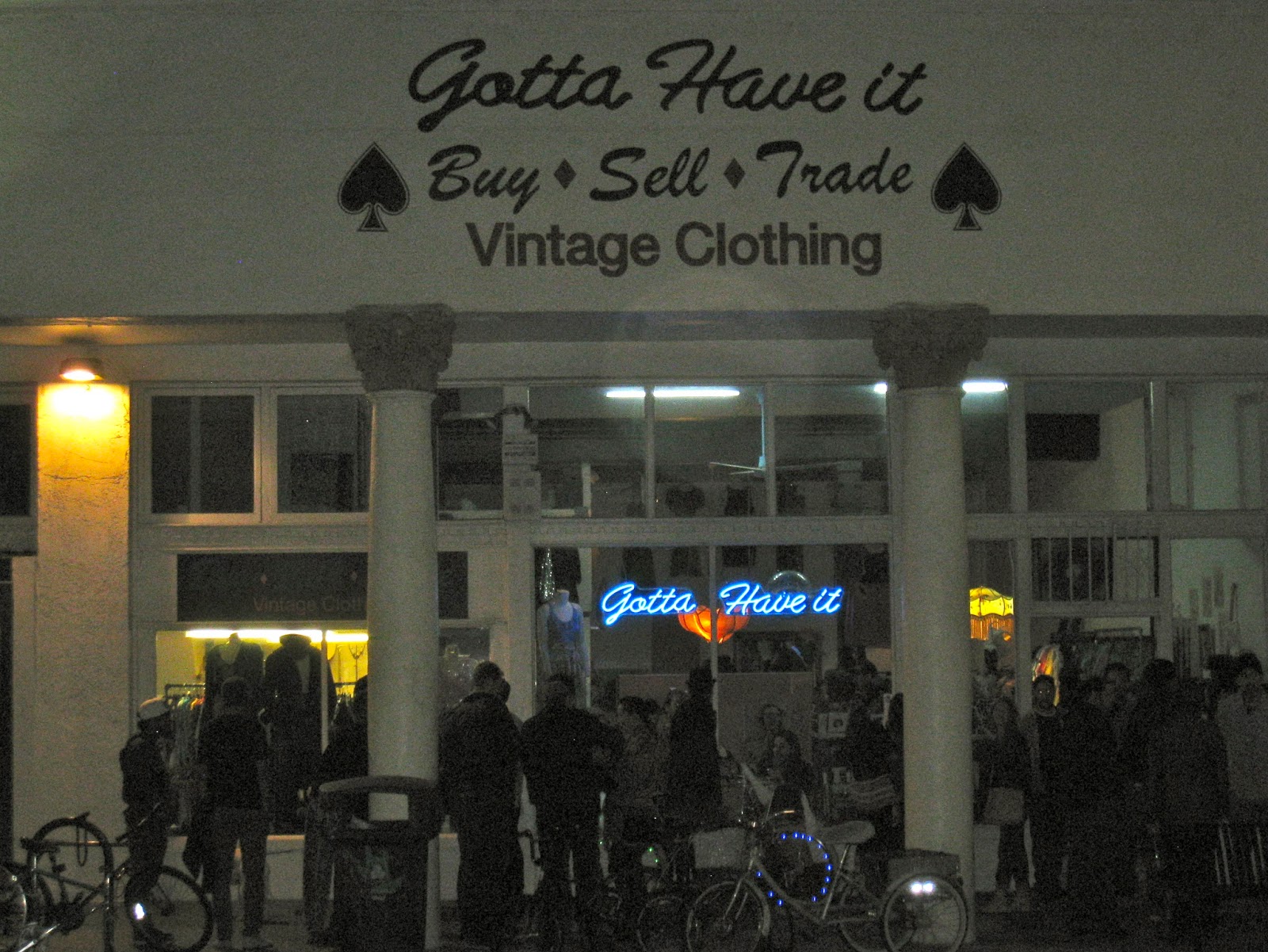 The scene at Gotta Have It was spilling out on to the sidewalk, where even more PBR's were consumed as revelers admired the art of Miss Lacey Cowden (you will recognize it from The Hart and The Hunter's walls). 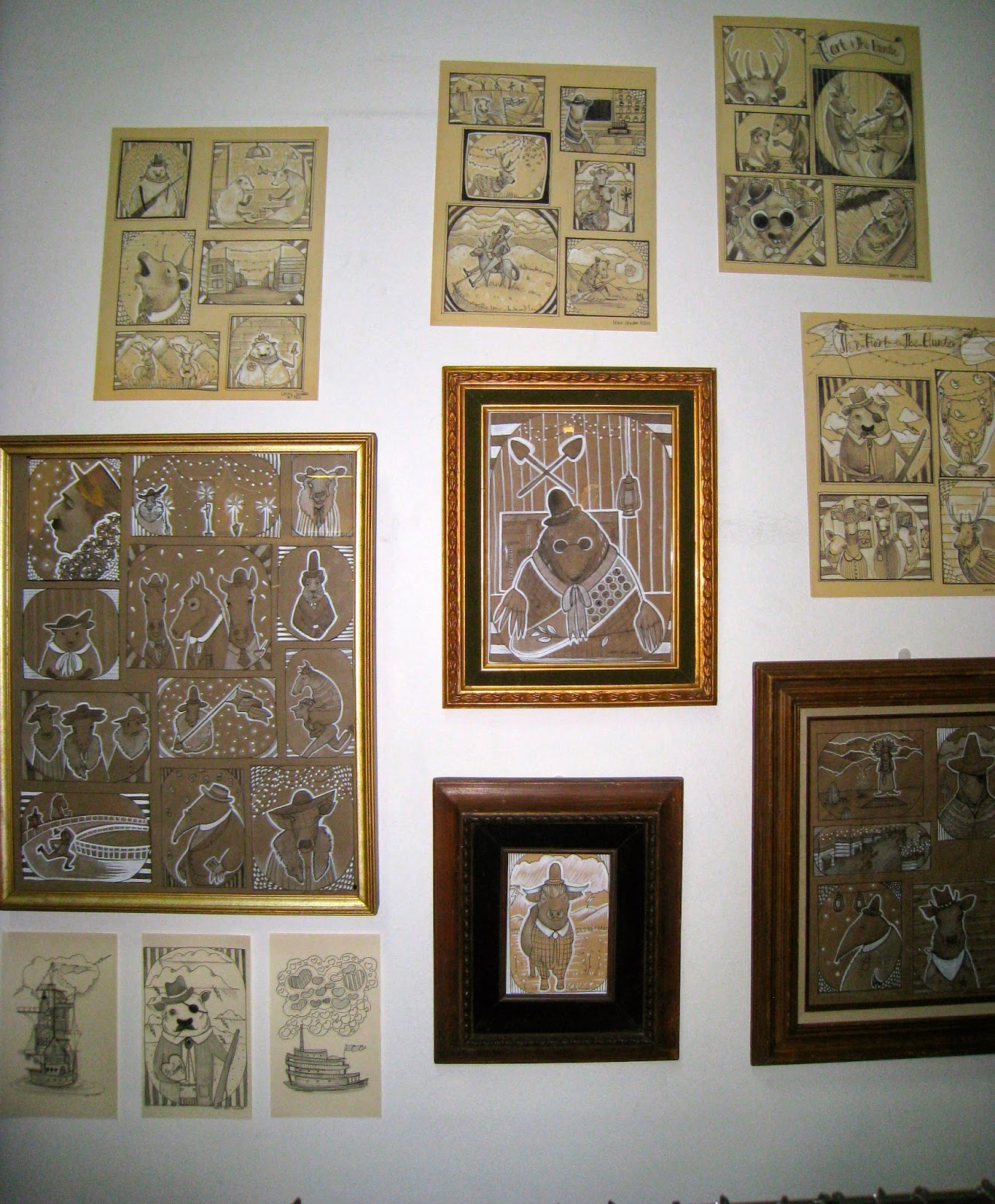 Cowden was really extra-exhibiting her talents, as she also played a full set of her story-telling ballads for the packed room. It was awesome. I love my friends. 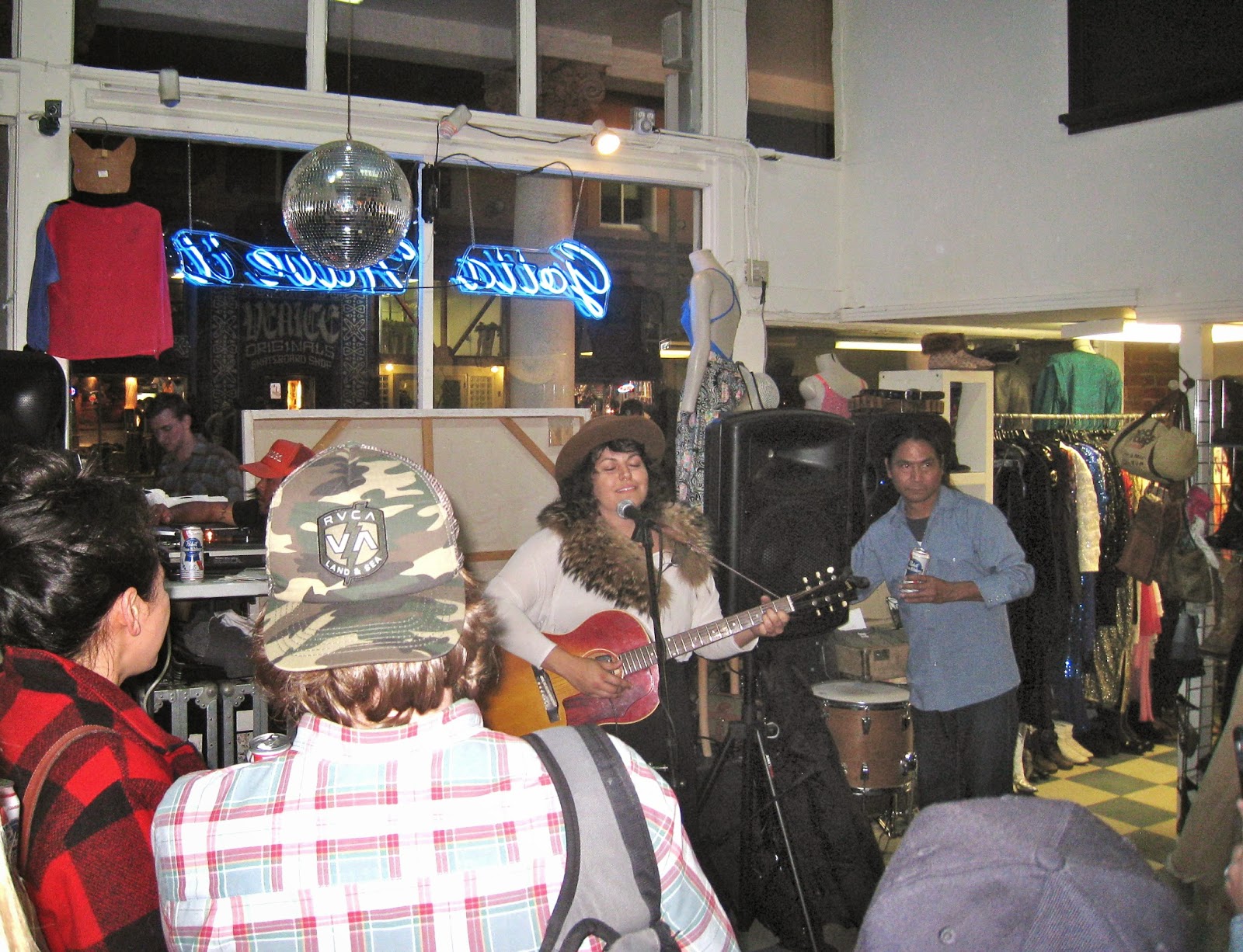 From there, it was on to The Ave to see the Venice photography of Chuck Katz ... and to drink still more PBR's. Packed again, and a total blast to be there with random fun friends, some that I hadn't seen in literally years. People were OUT. 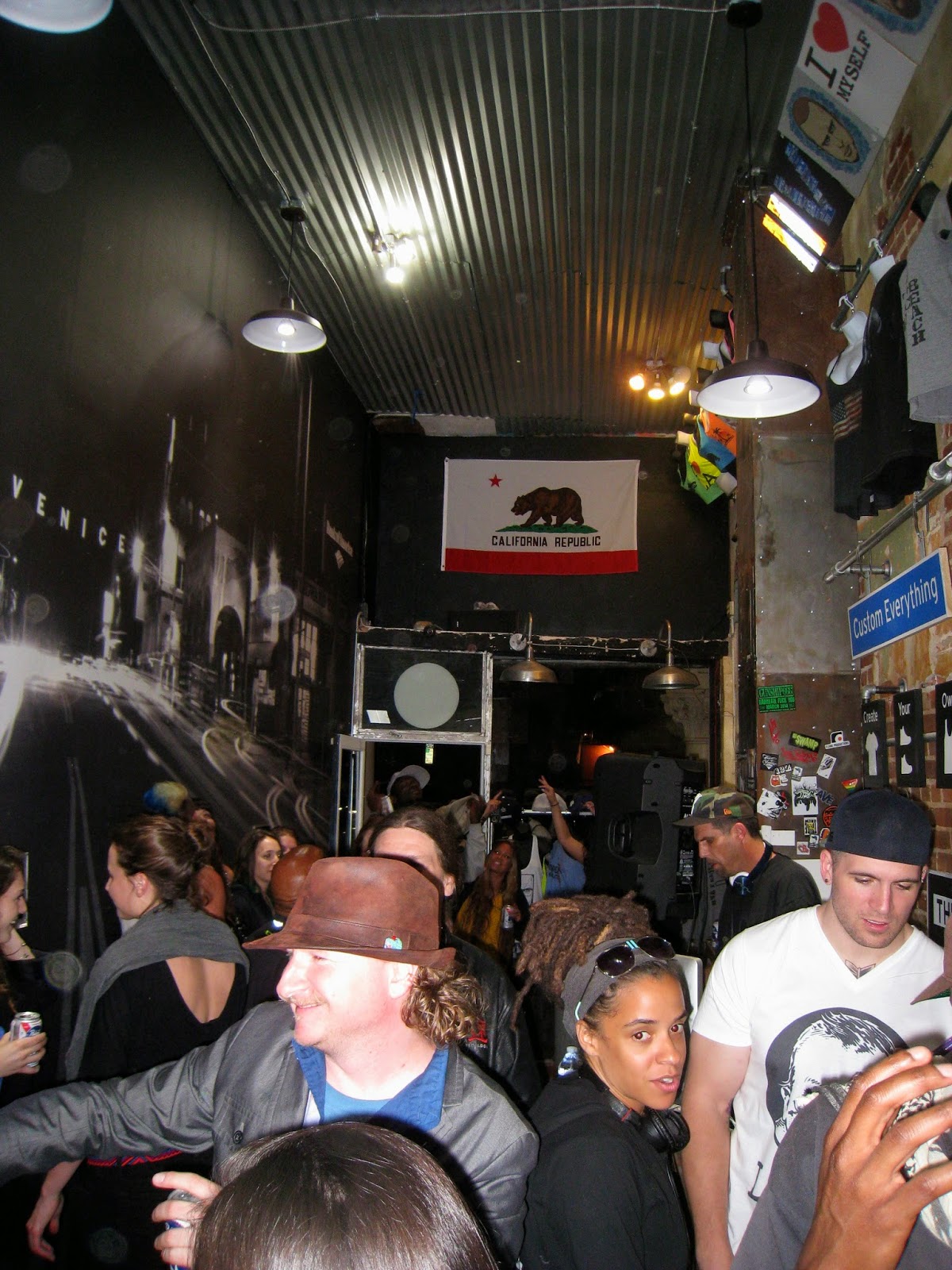 I regret to even say that the posse next moved only a couple doors down to The Townhouse to close out the night. Most VAC stops shut down at 10, and it was well past that by then. I'm mad at myself for missing other great art stops, like Sunny Bak and Ray Rae and about 30 others ... but the people I saw more than made up for that. Next time I will plan better, and factor in time to allow for surprise encounters ... or just drag them along. It's ALL good.

The next Venice Art Crawl is June 19th, and you really don't want to miss it. Any of it. Especially if you've lived here a while and miss your O.G. pals ... chances are you'll have a super fun reunion (sponsored by Pabst).
Posted by CJ Gronner at 8:27 PM