John Salley, best known as a former Los Angeles Laker, now has a talk show on the Reelz network called Game On! He stopped by the studio of Venice artist (and main homie), Tom Everhart, last week to check out the new art works and have a good sit down chat. I stopped by to check it all out, and though I've known and listened to Tom speak about his work for years and years, I still heard new things, and was as fascinated as Mr. Salley hearing it for the first time. 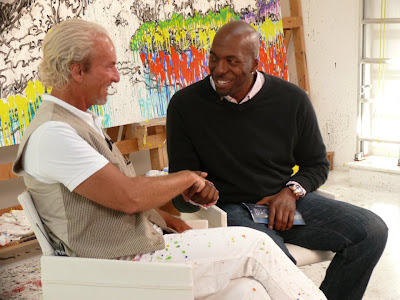 The t.v. people set up all their equipment, and we basically all just laughed and learned all afternoon. To begin with, Salley said, "This is my favorite space in all of Venice {me too} ... All white, beautiful women ... some of them white ... I'm getting the love in Venice! Thank you for letting me in!" He's hilarious, and started the interview portion of the deal by saying, "So I call you Snoopy Dude ...", which Tom explained that he often hears, sometimes as derogatory, and sometimes as a compliment. His art does feature Peanuts characters, yes, but after hearing him explain the whole story about how he met Charles Schulz, how he came to see the world through those eyes, and how a good artist sees something no one else sees ... it all becomes clear just what Everhart is up to with his vast canvases of bright color and wonder. 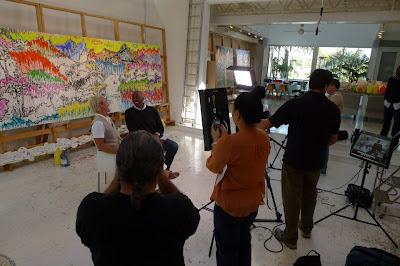 I want to leave some of it for you to watch on Game On! but to sit and listen (and try not to laugh out loud so the mics could hear - hard) to these two talk was very insightful and inspiring, for sure. Everhart explained that he was never into comics(though did add that "South Park is some of the best contemporary art today", but loved coloring books, but always wanted to create new things within the lines. His prior work was very realist skeleton pieces, but when he met Mr. Schulz, he did as encourage, which was to "Always see things in a new way". (That's very Venice). Tom almost died of colon cancer 23 years ago, and that experience gave him a whole new awareness of life, and those skeletons gave way to the happiness and color now seen in his work about the same time. 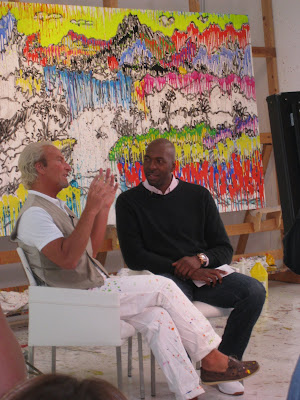 When Everhart met Schulz, they spent an entire day just drawing lines, the love of which bonded them together for the remainder of Schulz's life. Schulz's lines became Everhart's new art language. Schulz passed down his knowledge like a Father to a Son, and allowed him the use of his characters for the term of Tom's own life. While Tom was explaining this to Salley, he was nodding and smiling, and then said, "Yeah, at first I was like, 'What's up with the dirty water and the dots?" At the time, Tom replied that it was him seeing the birds at the beach. Salley now lit up, got it and said, "Now I started seeing things YOUR way!" Just as now when I see an Everhart Snoopy doing a back flip off a Tahitian cliff, I know that that's really Tom's wife, Jennifer expressing her love for life through Tom's eyes. That's how he sees it. 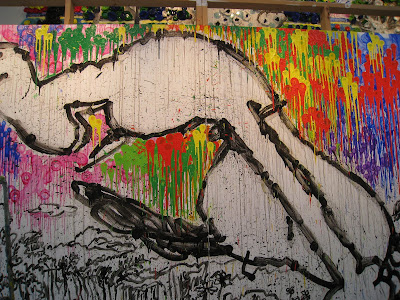 Tom doesn't really talk about the who's who collectors of his art, but Salley said, "Well, I know one very sexy guy named John Salley who has one of your pieces ..." which he sure enough does. 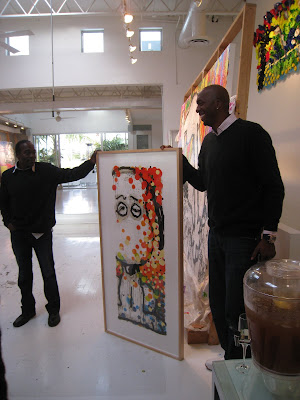 We all had a (basket)ball talking and celebrating art, and when Salley said, "See, when I played basketball, I had to share my championships, but now I get to interview champions!" I couldn't agree more. 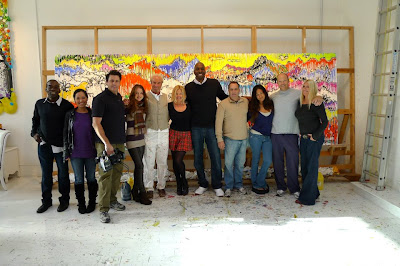 Check your local listings for Game On! With John Salley - The Tom Everhart Interview. Coming soon!


*Photos by Jennifer Everhart, Alan Shaffer, and Me.
Posted by CJ Gronner at 8:29 PM