One of the most adorable things you could ever do in Venice, California is attend the annual Holiday Boat Parade in the Venice Canals. This year was the 30th one, and I think it might have been the best yet. I say that because the mood of the boating participants and the attendants that packed every narrow sidewalk and bridge was sheer buoyancy ... and there is no pun intended there. There were plenty of to-go cups in gloved hands (it was beach chilly), but even without that help, everyone seemed to be in stellar spirits as they cheered and caroled under the clear, full moon evening. The Epstein-Mayers hosted the pre-party I attended (Thank you, our gracious hosts!), and we got our group gathered and Canal-side just in time to see the first boat sail by, poled along, appropriately enough, by some old-style Gondoliers (and "Mr. & Mrs. Abbot Kinney" that I didn't know). Perfect. 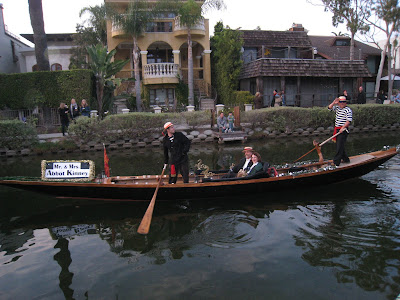 Right on their tail was a militant duck contingent bearing signs like "Duck-U-Py The Venice Canals" and demanding their just nest eggs. Venice always has a sense of humor, and we love it. 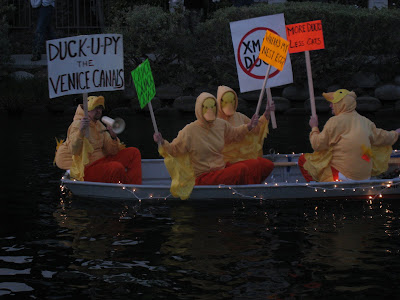 There was a fully amped rock and roll band made up of both Christmas characters and Super Heros. This may just have been my favorite, for fun, enthusiasm, and of course, rock. 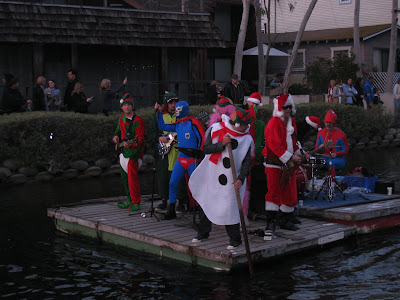 You can be as elaborate or as simple as you like in this parade, a big pontoon type deal, or a single kayak for one, as long as you're having fun. 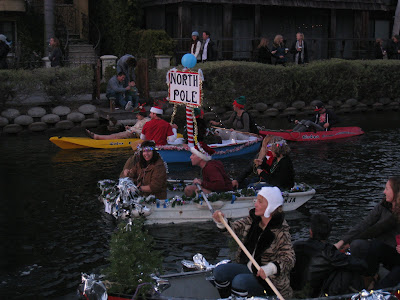 The crowds lining the bridges and sidewalks shouted their approval the whole time, and the number of people only increased as the sun began to set. It was so pretty out, people were just gasping ... locals and visitors alike. 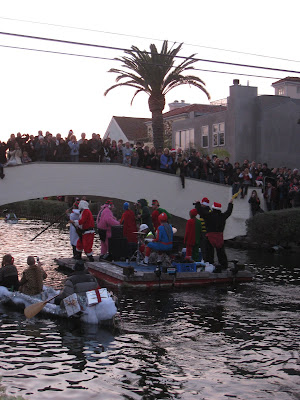 Pop culture was well-represented, from vessels celebrating Barry Manilow (?) to Snoopy's doghouse and the Starship Enterprise. 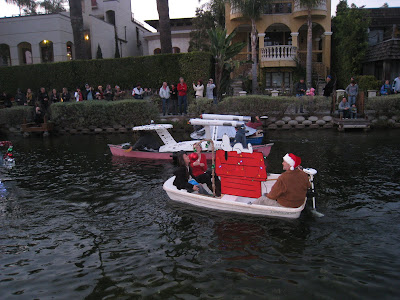 A darling little family of reindeer? More gondoliers? Fire people? were led by the exuberant Patriarch in singing some rousing Christmas numbers, with the little kid barbershop quartet on the choruses. I thought I might explode from the cute factor. Happily. 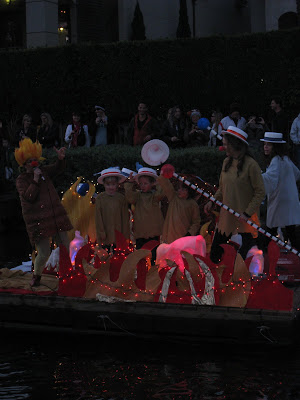 Hanukkah was given many shouts out by the happy Rabbi in his Menorah/Dreidel (that spun!) boat. He was a big hit, especially with the kids shouting out for candy (chocolate gelt). It's funny, the parade is like the new trick or treating, or Mardi Gras ... kids seemed to expect the boats to throw out candy ... Noted. 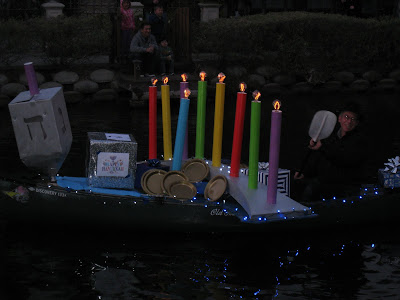 Even the dogs got into the act, as seen by this little reindeer dog, though his coat did say "Bark Humbug". Hmmm. 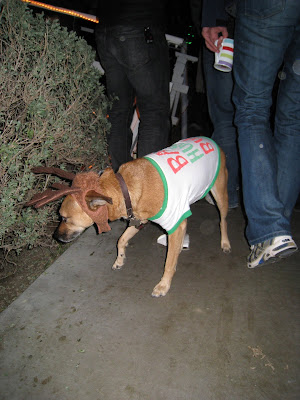 Robin the Snow Queen sailed by with a real fire burning in the bottom of her boat. Very cool. It gave me ideas for the Viking Ship we plan to set sail next year. *There was a pact made, I'll remind those who know. 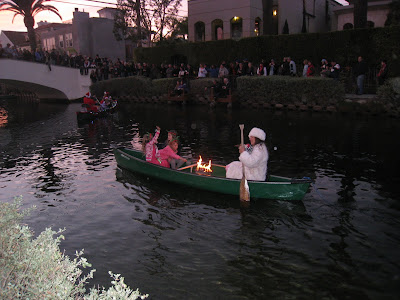 The sunset turned the whole sky pink and the lights of the homes and bridges (and boats) began to twinkle in a breathtaking twilight you couldn't even make up. Everyone looked beautiful ... mostly because everyone looked so happy. Truly, even if it was just forgetting about regular life stuff and problems for the moment, and being present and appreciating life and fun and Venice and NOW, while we had it. 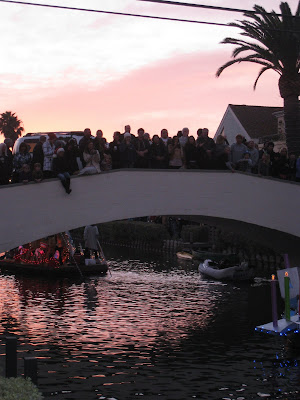 I think that's because you couldn't help but feel the HOLIDAY CHEER everywhere you looked, especially on this boat, with the coolest, happiest Snowflake Man (with his Christmas Tree friends on back-up vox) riling up the onlookers and getting them/us/me to join him in Karaoke Carols. 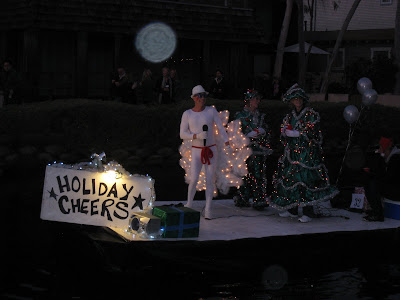 As the sky darkened and became more moon and star-lit, the boats wound their way around the canals, with more applause and cheers at every turn. The parade ended and the house parties around the Canals began (though many looked not to be at home ... are they crazy?! Those houses were MADE to be home on this night more than any other!). We paraded on foot back to our party, but not before being greeted and embraced and invited in by just about every friendly face you've ever encountered in town. Right up until this night, I hadn't been feeling the Holiday swing so much yet, with so many other things going on all the time, and time itself flying so fast. But then, as you see, the Holidays were jump-started right in front of our faces! 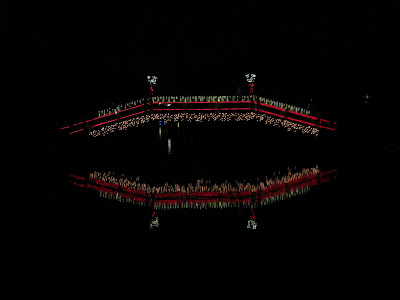 The rowdiness eased into a full moonlight serenity after a while. We rode our bikes back through the Canals later on, and I had to pause to soak up the simple loveliness of a Christmas-lit bridge with its reflection upon the water. I gave myself the moment for my own reflection, and with that, BANG! The Christmas Spirit was fully upon me. I'm feeling it! And I hope you are too.

With all the hubbub of the Season ... remember to reflect. Appreciate. Have FUN!